Method for Painting Eyes on Busts (and smaller scales)

Eyes can be tricky, but I’ve got a multi-step process that can hopefully help you out.  My focus here is on larger scale figures (busts and 90mm figures), however for smaller figures I use a simplified version of the same process.  I’ll say a few words about that at the end, but first up is my more detailed version.

Step 0: Before starting on the eyes, I like to add the main shadows to the skin around the eyes.  Easier to do this first so I can be a bit sloppy and make sure those dark colours get into all the recesses.  Once you put all that work into doing a detailed eye, you don’t want to have to repaint it because you accidentally got the skin colours on it! You may want to also check out my tutorial on unnatural skintones, or Aythami’s tutorial on skintone or the awesome write up by master painter Jason Zhou on how he paints faces on busts!

At this stage it may be helpful to search the web for reference, there are a lot of images and will not only help you understand the structure of the eye but maybe will also provide you some inspiration for style or colour. 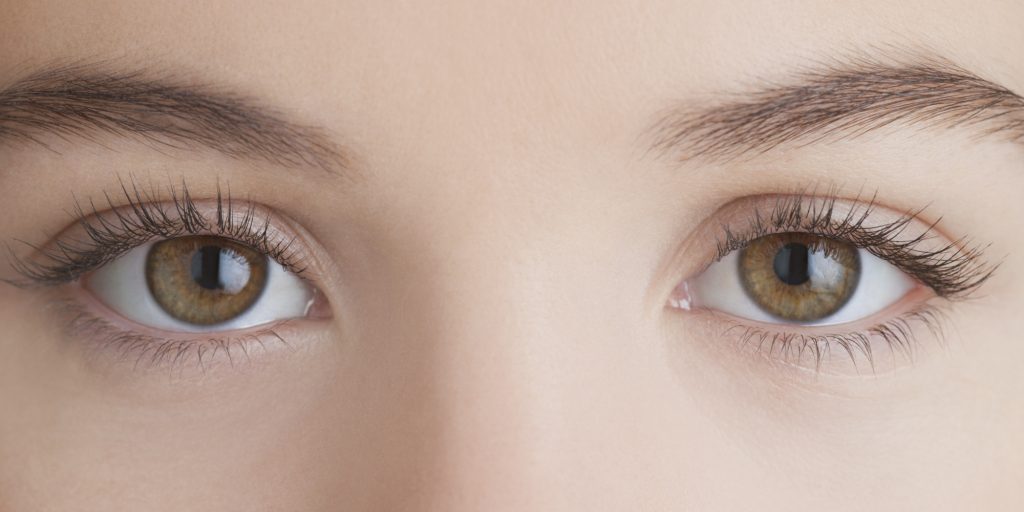 Close up of woman’s eyes (www.huffingtonpost.com)

Step 1: I start with a layer of pink.  This will get mostly covered up in the next step, but you will leave some of it showing at the corners of the eye.  If you end up with a bit of pink showing along the bottom edge of the eye that can be nice too.  For the pink shade I usually use a mix of red and my skin tone, but the exact shade of pink is not critical.

Step 2: Now I go over the previous step and paint the ‘white’ of the eye.  Remember to leave the corners pink.  The real trick here is DON’T USE PURE WHITE!  If you do, the result will look unrealistic.  Remember, the eye is a sphere and you’re looking at the side.  If the top is pure white, the side will be more of a light grey.  I often use Reaper’s Weathered Stone, but a variety of light greys or off-whites will work fine.  On a bust, I’ll do some shading here, though I don’t spend a lot of time on it.

Step 3: Time to paint the iris.  Let’s break this down into a couple of stages…

Step 3a: Starting with a dark colour (dark blue, dark brown, etc), I’ll place a small dot where I want the centre of the iris to be in each eye.  I then take a step back and see how it looks.  Are they pointing in the same direction or are they a bit too close together or too far apart?  In the next step you can make minor corrections.

Step 3b: Gradually expand the small dot into a circle for the iris.  If the initial placement is good, then just expand it evenly.  If they’re a bit too far apart, expand more towards the inside of the eyes.  If they’re too close together, expand towards the outside of the eyes.  Once that’s done, I’ll clean up the edges as needed with the off white shade from step 2.

Step 3c: Finally I’ll go in with a lighter colour (light blue, light brown, etc) and shade the iris.  I’ll tend to highlight down, so the bottom of the iris is lighter than the top.  Sort of like how you’d shade a jewel.  The lighter you go with the colour, the more the iris will pop for the viewer.  So feel free to exaggerate!  As you do this, try to leave a fine line of the initial dark shade around the edge as a border.  Don’t make this too thick, the smaller the better.

THE PUPIL AND OTHER ADJUSTMENTS

Step 4: Time to add the pupil.  This is just a dot of pure black.  I use a small brush (000), though you can also try using the tip of a tooth pick.  The more practice you get, the easier this will become.  If it’s not right, go back with the iris colour and either try to fix it up or just paint over it and start again.  The eyes are a focal point, especially on a bust.  So put in the extra time to get it right! 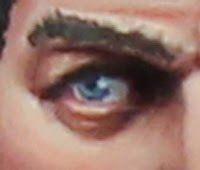 Step 5: We’re almost done.  Now I’ll go back in with pure white (yes, this time actual white) and add in a catch light.  This tends to look best if it’s off centre but overlapping the pupil and iris slightly (see the example images for what I mean).  It should be in the same position for each eye, so if it’s off to the right in one eye it should be off to the right in the other eye.

If you’re painting OSL or as if the light is coming from a specific direction, the positioning of the catch light should reflect (pun not intended) that.  However, if you’re doing zenithal lighting, I’d still place the catch light slightly off to the right or left and not at the exact top of the iris/pupil.  As with the pupil, you can try applying this with the tip of a toothpick instead of using your brush.

For larger figures like busts, you can skip the catch light and instead apply a layer of gloss varnish to the eye.  You may prefer this to the painted on catch light, it’s just a matter of personal preference.  However, I do not think this is as effective on smaller figures (75mm, 54mm, and 28mm). 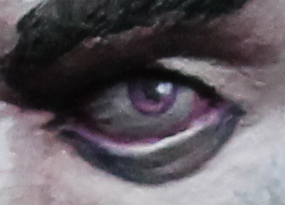 Eye for a bust painted using this process

Step 6: Time for cleanup.  Often I’ll get some of the whites of the eye or the iris colours on the area around the eye.  To clean this up, I will use a dark colour and create a border at the top of the eye.  This looks good above the eye but not below it.

A black or dark brown line below the eye looks “cartoony” but above the eye it represents the shadow at the bottom of the upper eyelid and also sort of mimics the presence of eye lashes.  Below the eye I will either use the skin shade or the pink from step 1 to create the border.

Placement of the iris/pupil: Look at the pose of the figure and think about whether it makes sense for the eyes to be looking straight forward, off to the one side, or up or down.  If the figure is pointing or has the head turned, place the eyes following that direction.  On a bust you might not have a pose to work with, but having the eyes looking in a direction (other than straight forward) can help add some interest and motion to the piece.

Colour of the iris: Light colours tend to show up a bit more when viewed from a distance, so often I’ll pick colours such as light blue or green over brown.  If I’m going to all the effort of painting the iris, I want people to be able to see it!

Shape of the catch light: If you’re looking for even more realism, you can paint the catch light to match a specific shape.  For outdoor lighting, a round dot works well.  But indoor you might do a square/rectangle (for light coming from a regular window).  If you really want to up your painting, you can start to think about the fine details like this.

Adapting approach for smaller figures: The smaller the figure, the less detail I’m physically capable of painting on the eye.  Plus people probably aren’t going to be able to see it all on those small figures anyway.  Try to do as much as you can, but slim down the approach where you need to.

For example, on a 54mm or 28mm figure I might skip step 1 and just go on to step 2.  I might try to do a single colour iris (no shading) or just pick a dark colour (dark blue, dark brown) and use that to represent both the iris and the pupil.  I think adding a catch light is still a nice touch, but it can be very difficult on a small figure so skip that too if it’s too frustrating.

Thanks for reading, I hope you find it useful!