This site is not focused on any one genre of figures.  We hope to expose people to all sides of the modelling hobby.  Speaking for myself, sometimes it feels like there is a disconnect in the figure painting community between the fantasy/Sci-Fi crowd and the historical crowd.

Certain sites, shows, and clubs seem to cater to one or the other.  In my experience, groups and shows are generally accepting of any genre of figure.  But there’s not as much overlap as I would expect.  While a lot of the top artists paint all types of figures, people who entered the hobby through games like Warhammer, 40K, Warmachine, etc. often seem tentative to try their hand at historical figures.  If you’ve never done a historical figure, then this article is for you!

Range of figure genres, from Neanderthal to Modern. All pieces from Pegaso Models

WHY PAINT AN HISTORICAL PIECE

Well, there’s a huge range of top notch sculpts/kits out there in the historical genre.  Companies like Pegaso Models have been making fantastic historical figures for years.  Newer companies like NutsPlanet, Nocturna, Figone, Life Miniatures, and many others are also offering great historical pieces (along with fantasy and sci-fi ones).

Typically the historical figures out there are designed purely for painting and not gaming, so they are great art pieces.  So if you never even looked at those subjects, you’re cutting yourself off from some amazing sculpts.  But, more importantly than the quality of the kit/sculpt, hopefully there is some era, some historical subject that interests you.

There are figures representing cultures from around the world and from prehistoric times up to the present.  You don’t need to be a history buff, but I think most people have at least a passing interest in the history of their culture/country/family.  This can be a great excuse to delve in to this interesting genre. 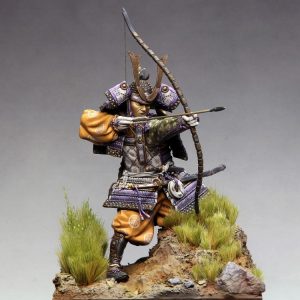 Great historical piece.  Whoever painted this must know what they’re talking about. You should listen to them.

Perhaps you are tentative because you feel like you’re not an expert on a certain historical era and don’t know how a figure should be painted.  How much does historical accuracy matter?

The short answer is it’s all up to you!  I think people approach historical figures in a number of different ways…

Strict Historical Accuracy: Here the idea is to be as accurate as possible. People research the subject, look to reference books like those from Osprey Publishing and, if possible, check out historical artefacts from the given era.  If you’re painting a relatively modern figure (something within the last couple hundred years), maybe there is information available on the specific colours and shades of colours that the piece should be painted.

For more ancient subjects you might research what dyes were available and pick colours to match.  If the sculpt isn’t entirely accurate you can convert it too.  This is a very serious approach and can end up meaning a lot of time and planning go into each of your pieces.  But the internet is a fantastic resource.  Often you can find sites dedicated to different eras and consult experts on those topics to help you out.

Relative Historical Accuracy: In this case you want to be accurate but without putting in a ton of work or stressing about the small details. You might Google the subject to see what colours the piece should be, but not worry so much about the EXACT colours.

You know the uniform should be red, but don’t care so much if it’s crimson or scarlet or vermilion.  For ancient pieces you don’t worry about finding proof for your choices, just so long as the colours and materials are plausible.  I like to think of this approach as painting historical figures but with some artistic license.

Who Cares About Historical Accuracy? In this approach all that really matters is you paint the piece how you’d like to. There’s no research done and you let your imagination go where it will.

In short, what I am trying to say is historical accuracy is a sliding scale.  You can endeavour to be 100% accurate, 0% accurate, or anywhere in between. The key thing here is to realize that all of these are perfectly acceptable things to do!  If you like doing the research, do it.  If you don’t, then don’t worry about it! 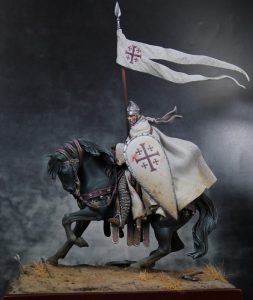 My knight – I took some liberties with colours and patterns, but still consider this a mostly accurate historical piece.

Even if you want to compete with the figure, most shows don’t judge you on historical accuracy.  The ones that do are typically IPMS shows where their focus is on vehicles.  But, when it comes to figures, the judges usually just care about how well it’s painted.

Obviously I can’t speak for every show, but unless a figure is just so out there (like a WWII figure painted in pink polka dots), it probably won’t hurt your score at most shows.

If you’re just painting for your own enjoyment, then it’s completely up to you whether you want to put a lot of effort into historical accuracy or not.  If you post your work on-line you might get comments from people about this colour not being right or that material being incorrect (it was bronze, not iron!).

But, even if you put in a lot of research that can happen (hey, that’s not the right shade of blue!).  My response is typically to claim artistic license (yes, but that shade of blue looks better with the other colours I used).  You can let it bother you and stress out, or you can say I’m making a piece of art so I can do what I want to achieve my vision for the piece.

To be completely honest, this problem isn’t limited to historical figure painting.  I’ve had my version of a space marine criticized for not being the right shade of green for that chapter!  Are we really going to get worked up over the correct colour for something that doesn’t even exist?  Well, I just used the same excuse (artistic liberty) there too.

FINE LINE BETWEEN HISTORICAL AND FANTASY 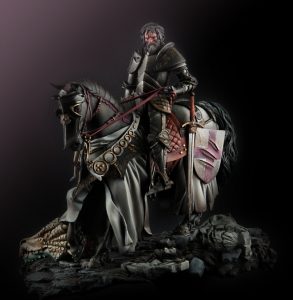 Depending on the subject, there is often a fine line between historical and fantasy figures.  An obvious one would be a knight.  You can paint him as a crusader and go full historical.  Or you can paint him in whatever colours you want and pair him with a dragon.

There are plenty of medieval figures (knights, barbarians, Vikings) that can just as easily pass for fantasy figures.  An example that comes to mind is St George from Michael Kontraros Collectibles.

The kit comes with a dragon head for the base which makes it a fantasy piece (unless you take the legend as fact… but that’s a conversation for another post).  Of course, if you remove the dragon head, the figure can easily pass for a regular historical knight.

Another example is work from Roman Lappat, Davide vs. Goliath.  He took a 75mm historical figure and paired it with a 28mm fantasy piece.  That turned the historical figure into a fantasy giant and created a very interesting end result.

Don’t get hung up on labels.  Take advantage of everything that’s out there and do what you want with it.

SO WHY HISTORICAL FIGURES?

Returning to my initial question, why should you paint historicals, I’d like to give one more answer.  Paint historical pieces because it helps bring the different communities in our hobby together.  And, even if you don’t paint an historical figure, check out some of the shows, clubs and forums that are more geared to historical figures.

You will find the vast majority of them are open to fantasy and Sci-Fi figures too even if they don’t paint them themselves.  I think both sides can learn a lot from the other.  There’s a lot of freedom in fantasy and Sci-Fi pieces to explore colour and create bases/scenes.  Help expose the historical painters to those ideas. 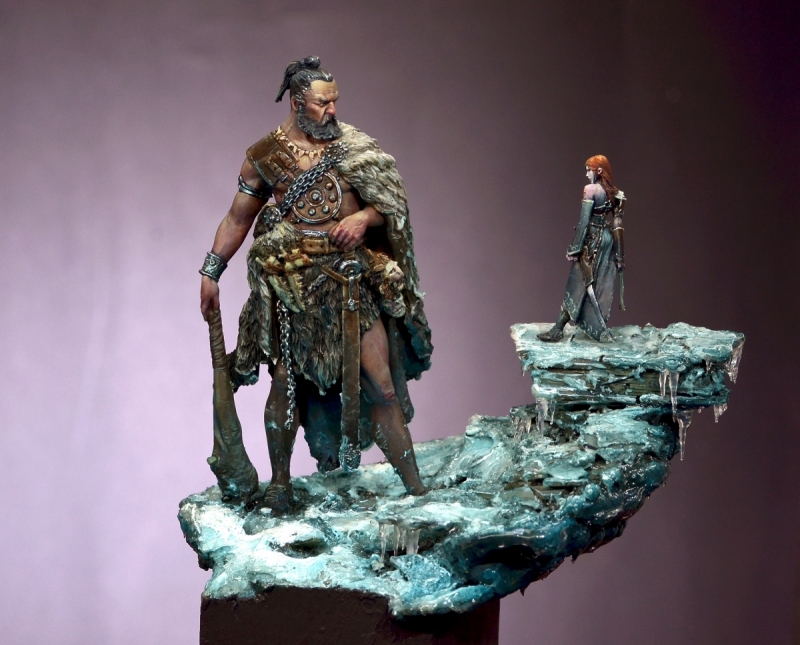 Meanwhile, in historical circles they’ve got a lot of experience working towards realism.  The vehicle people are often experts on weathering techniques.  I’ve taken a lot of lessons from them and applied those to my figures.

In short, be open to any figure, don’t limit yourself to just one genre.  That goes both ways, if you’re a dedicated historical painter, try a fantasy or a Sci-Fi figure from time to time. It will help you learn to be a better painter/modeller and, you never know, you just might find you like that other genre too!