A Step by Step for Painting Tartan Patterns 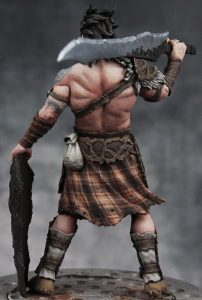 54mm example piece showing the end result of this step by step.

If painting designs on your figures makes you nervous, taking on a tartan might seem like a nearly impossible task.  Well, the truth is, if you can paint (mostly) straight lines then you can paint a tartan.

In this tutorial I’ll breakdown the pattern and show you how to build it back up, one simple step at a time.  The only other trick is trying to keep those lines uniformly spaced and of uniform thickness.  The more uniform the lines are, the better the tartan will look, so I’ll be sharing some tips to help with that as well.

I’m going to begin with a bit of historical background and some tips on coming up with the tartan design.  Tartans can look great on both historical and fantasy figures.  So if the background info sounds too boring and you just want to paint trollbloods, feel free to jump to the following section where I’ll get to the actual painting.

A BIT OF BACKGROUND

Tartan is a pattern that is closely associated with Scotland.  The pattern is made by weaving alternating bands of colour at right angles to each other.  These days we associate specific colours and patterns to specific Scottish clans.  However, that association came about in the middle of the nineteenth century.  Prior to that the designs were related to the weaver making them and the natural dyes available in the area.  As a result patterns would be associated more with a region or district rather than a specific clan.

The shades of the colours in the tartan come in three different variations: modern, ancient, and muted.  Modern tartans are coloured using chemical dyes.  These produce strong shades and darker shades for the tartan.  Ancient shades produce a lighter coloured tartan and represent the colours that would result from ageing over time.  Meanwhile muted refers to shades between modern and ancient.  However these shades are said to be the closest match to the shades attained by the natural dyes used before the mid-19th century.

Whether you plan to paint a historical piece or not, browsing a collection of historical patterns can help you come up with the colours and pattern for your project.  A good resource is: http://www.house-of-tartan.scotland.net/house/tfinder.htm

STEP 1: BREAKDOWNING DOWN THE PATTERN 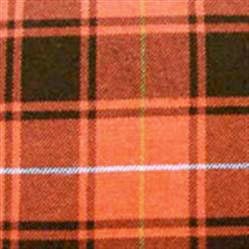 At first glance, tartans look like a complex design.  In actuality they are just a series of horizontal and vertical lines.  If we treat it as such and take it one set of lines at a time, we can recreate that complexity without getting overwhelmed.  So we begin by looking at the pattern we’ve selected and breaking it down into the following parts:

Background Colour – In my case, orange.

Secondary (Next Thickest) Horizontal Line – For my example this is the thin brown line on either side of the thick one.

Secondary (Next Thickest) Vertical Line – Same as the horizontal case.

And so on until you run out of lines…

If you pick a different tartan style, the colours and number of lines might change.  But, all you’ve got to do is identify the lines and divide them from most significant (thickest) to least (thinnest).

STEP 2: LAY DOWN THE BACKGROUND COLOR 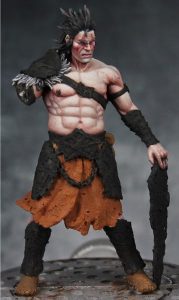 Tartan area base coated with orange

Probably the easiest step… all you’ve got to do is paint the solid background colour on the mini.  We’ll be building up a number of layers on top of this, so best to keep the application as thin and smooth as possible.  Applying overly thick paint here can make your work more difficult in the later stages, so take some extra care as you go.

At this point you’ve got a decision to make… do you shade and highlight or wait until later?  It’s personal preference.  You’ll want to give each set of lines some highlighting and shading.  I find it easier to shade as I go, that way I’m not overwhelmed at the end.  In this case, I decided to wait until I’d done the first set of horizontal and vertical lines and then shade both those and the background at the same time.  It’s up to you to decide how you want to tackle that and what is the easiest for your style.

First, what colour should you use?  The colour of any region should be a 50/50 mix of the colour for the horizontal yarns and the vertical yarns.  In this case, one family of yarns is dark brown and the other family is orange, so I mix the orange and brown to create the shade for these lines.

Okay, on to laying down the lines.  This is the hardest step.  Once you’ve got these lines down, you can use them as guides for the rest of the project.  I suggest starting work on just the horizontal or just the vertical lines to start.  For a kilt like the one I’m working on, the bottom edge forms a nice reference so I’d begin with the horizontal lines.  Yes, the bottom is tattered, but I’d expect the line to be a roughly the same height all the way around.

Alternatively I could use the belt as my reference and work my way down.  In this case, I began at the bottom and painted the lines all the way around and keeping the height above the ground as constant as I could.  I then moved up to the next line and painted it around the figure (keeping the spacing between the two lines consistent as I went).  To help with the spacing you can grab a ruler or place marks on a scrap of paper.  Check your work as you go and make adjustments as needed.  For this piece I had just one more line to go and then I was done.

In addition to the spacing, I want to keep the thickness of the line constant.  Again, use a ruler or marks on a scrap piece of paper to check your work and make sure you’re not getting too far off from where you want to be.  Remember to look at your reference to see how thick it should be relative to the spacing between the lines. 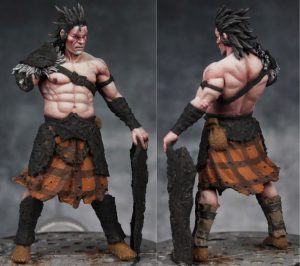 Once all the lines are in, take a step back and see how they look.  Do they randomly getting closer together or farther apart?  Go back and adjust them so they don’t.  Pay attention to the folds in the cloth and any movement.  The lines should follow these features in a believable way.  In general, if they look right, then they are right.  It’s much easier to make fixes at this stage.  The further we go, the more difficult it will be to make changes to the pattern.

STEP 3 – PART 2: PAINT THE SQUARES WHERE THE LINES CROSS

For the last step I had used a 50/50 mix of the dark brown and the orange.  This is valid for most of the lines, but where the horizontal and vertical stripes cross it should be pure dark brown.  After the last step, this should be simple by comparison.  Use the lines as a guide and use the dark brown to fill in a square where they cross.  If your piece has different colours for the horizontal and vertical lines, use a 50/50 mix of those two shades for the box. 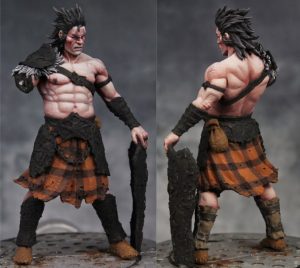 Dark squares painted wherever the horizontal and vertical lines cross.

At this point I decided to take a step back and shade the piece.  This can be done at any stage.  But I felt I had enough down that now would be a good time.  I’ve only got three colours to worry about (orange, dark brown, and orange+brown).  As I go on from here I’ll be adding more colours and lines.  Shading everything at the same time can be daunting, so I shade what I’ve got now and will shade each of the following lines as I add them. 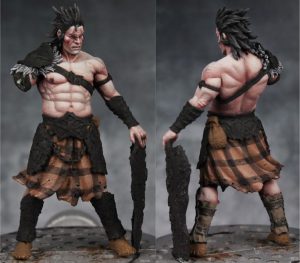 With the main lines done, we now turn to the secondary set of lines.  Just like step one, we start with either the horizontal or the vertical families.  Remember, the colour should be a 50/50 mix of the colours for the horizontal and the vertical yarn.  I find it easiest to use the line colour and the background colour to start.

When laying down these new lines, use the existing lines as a guide.  You can still use a ruler to measure the spacing, but most likely the presence of the primary lines should be enough to get them looking right. 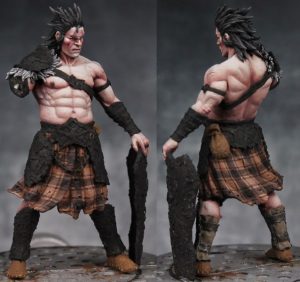 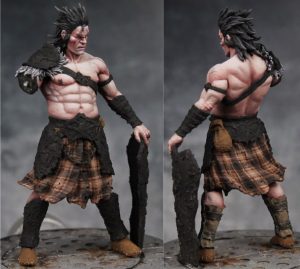 Tertiary lines added and finished touches put on the tartan

During each of the preceding steps I was cleaning up the lines as I went.  If they weren’t quite straight or got too thick somewhere, I’d use the background colour to touch them up.  Still, I’ll take a good look at everything now that I’m theoretically done and see if there were any mistakes that I didn’t catch earlier.

This is also the time where you can apply glazes to help tie the whole piece together.  You can also use glazes or washes to further shade the tartan.

As you can see, none of those steps individually are all that tough.  It’s just a matter of laying down parallel and perpendicular lines.  Keeping track of all the colours and lines can be tedious, but if you take your time it’s very doable.  Give it a try and I’m confident you’ll be making a great looking tartan (and impressing other painters) in no time!