This latest bust release from my friend Benny Sa sent me from NutsPlanet is an absolute gem, it is quite literally one of the most beautiful busts I have ever seen. The kit arrived in its’ now customary blue box adorned with the boxart by Myeong Ha-Hwang, the kit comprises 12 polyurethane resin parts, secured in ziplock bags and nestled between layers of shaped foam. The sculpt by Jun-Sik Ahn is intricate in it’s ornate detailing and perfectly captures the regal and opulent appearance of the Korean Naval Commanders. The cast as always is very good and first impressions on opening the box are superb.

Yi Sun-sin (April 28, 1545 – December 16, 1598) was a Korean naval commander, renowned for his victories against the Japanese navy during the Imjin war (two separate invasions between 1592-1598 led by Toyotomi Hideyoshi) during the Joseon Dynasty. Such was his prowess and tactical excellence he was well-respected not only by Koreans, but by the Japanese admirals as well, indeed many military historians have placed the General on par with Admiral Nelson as arguably the greatest naval commander in history, in respect to his undefeated record against seemingly insurmountable odds, all of this without any prior experience or naval training.

One such remarkable military victory occurred at the Battle of Myeongnyang (October 26, 1597), where with just 13 ships to his command and facing a Japanese force totalling 133 ships,  he halted the Japanese fleet and destroyed 31 enemy ships, without losing a single ship of his own. Despite never having received any training or been involved in Naval combat prior to the War with Japan and despite always facing overwhelming odds, he remained undefeated in 23 confrontations.

Admiral Yi lost his life at the Battle of Noryang which took place in the early morning of 16 December 1598. He was mortally wounded by a single bullet and with his dying breath said “The battle is at its height…beat my war drums…do not announce my death.” 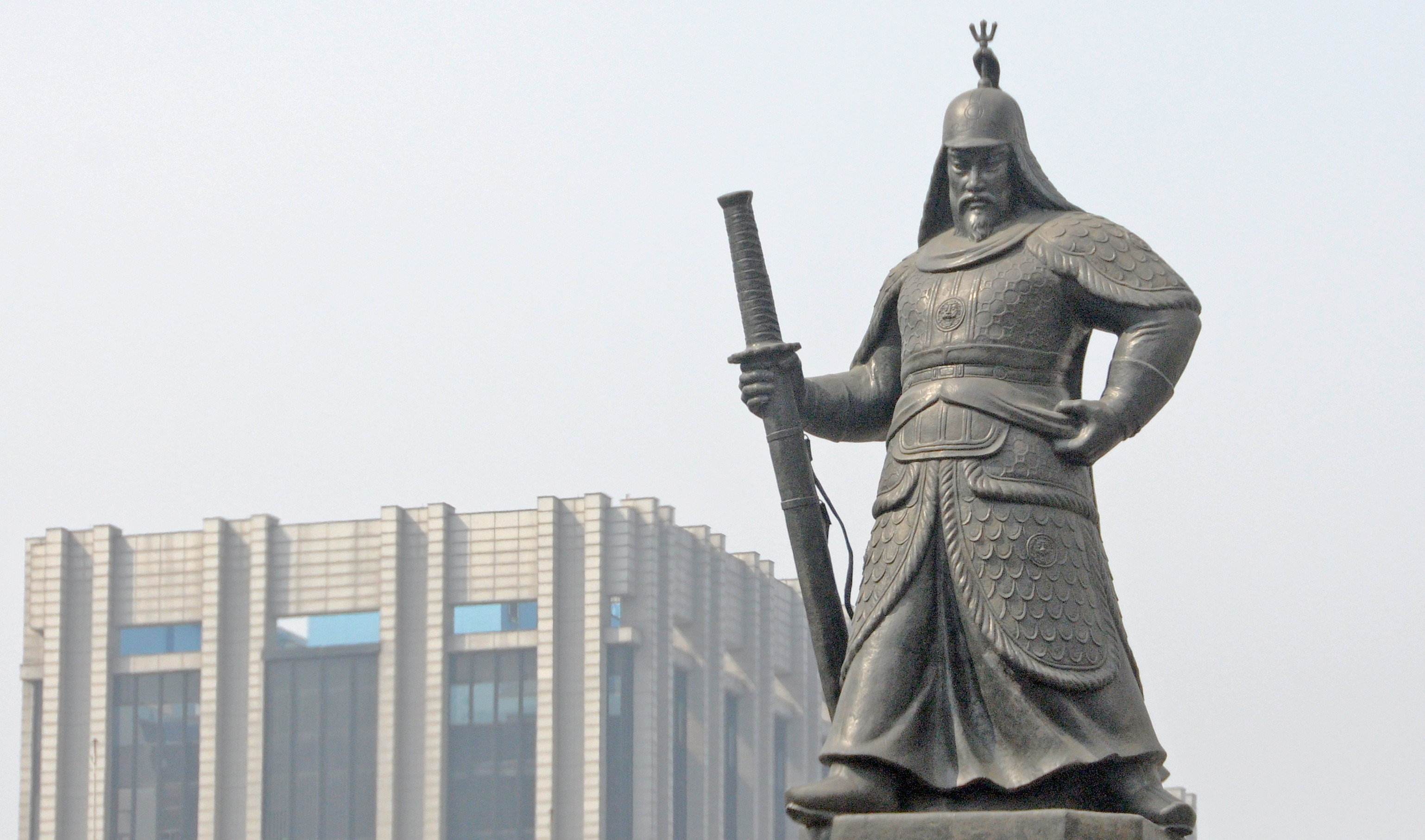 One of his greatest accomplishments was reinventing the “turtle ship”, along with his creativity and innovative support of his subordinates, Yi was able to revise the geobukseon, based upon an older design that had been suggested during the reign of King Taejong (13 June 1367 — 30 May 1422).

These new turtle ships designed by Yi held eleven cannons on each side of the ship, with two each at the stern and the bow. The ship’s figurehead which was in the shape of a dragon also held up to four cannons, and emitted a smokescreen that, in combination with its fierce appearance, was meant to be used as psychological warfare. The length of the turtle ship was dotted with smaller holes from which arrows, guns, and mortars could be fired. In addition, the roof was covered with spikes so as to prevent the ship from being boarded by the enemy, the Japanese ships sat higher in the water and so any likely boarders risked being impaled if they were to jump down upon the turtle ship. Admiral Yi made it a strategic point to avoid hand-to-hand combat, in which the Japanese navy specialised. The turtle ship was thus developed to support this tactic primarily against the Japanese fleets. 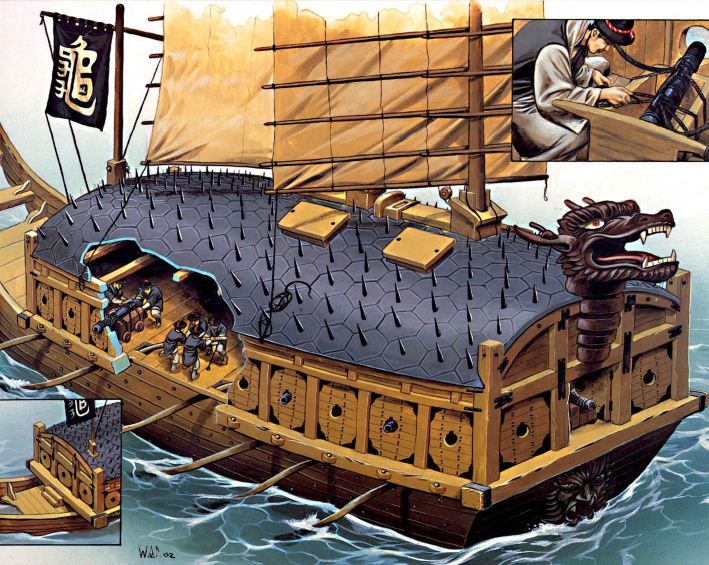 this illustration clearly shows the innovative design and armament

The royal court eventually bestowed various honours upon him, including a posthumous title of Chungmugong (Duke of Loyalty and Warfare) and he remains a national hero among Koreans even today.

There are predominantly four main parts to the bust, the torso, head, helm and the decorative, multi panelled neck guard. Beginning with the torso, it is crammed full of intricate detailing including horizontal lines of small, round studs with larger ones interspersed throughout. There is a fur trim along the centre of each side and also along top and bottom of the ornate “sash” around the waist. 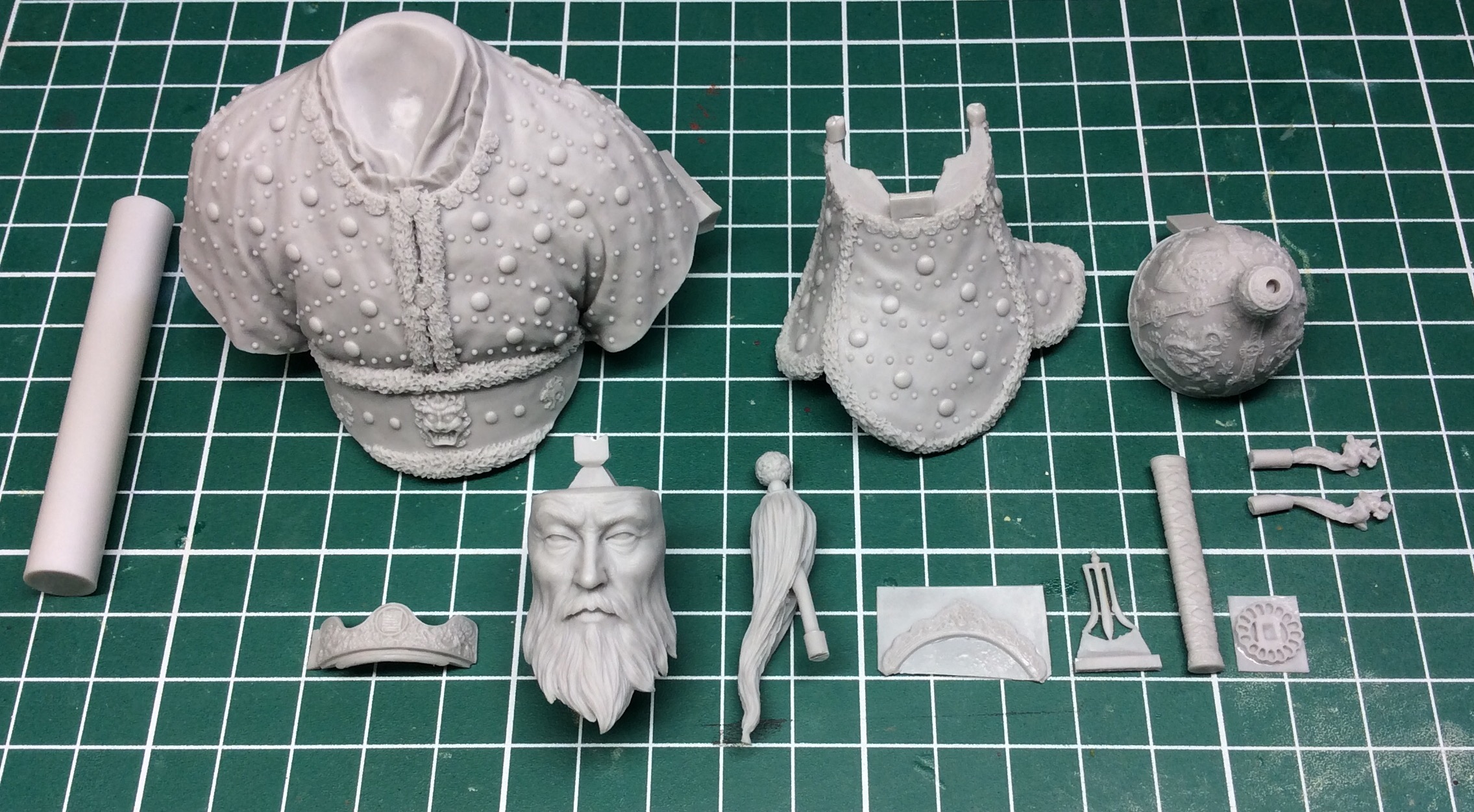 There are several decorative dragon motifs that are all wonderfully intricate and highly detailed with crisp, accurate casting. The folds and creases to this padded or quilted “jacket” are natural looking and not over done, looking realistic and the fabric is cinched nicely where appropriate. There is a resin block that needs removing and filing smooth. 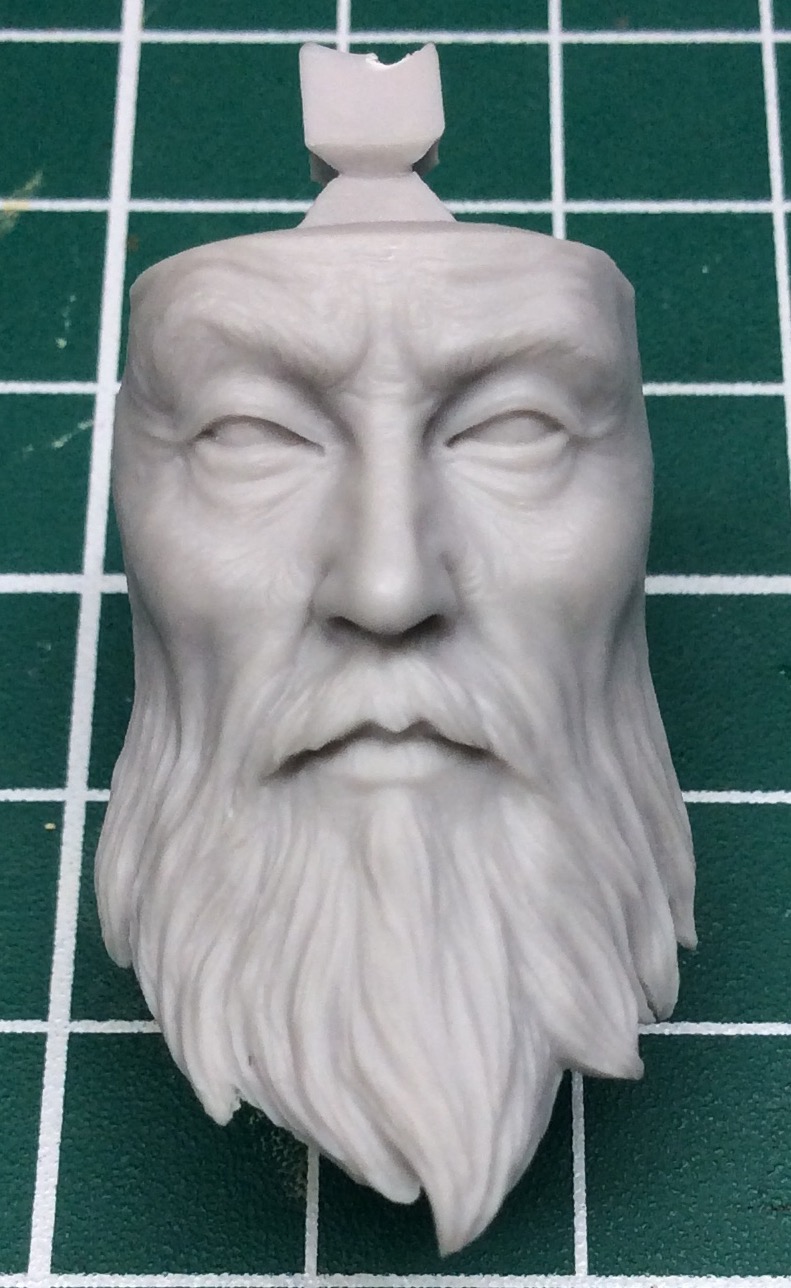 the level of detailing to the face alone is stunning

The head is enigmatic and beautifully captures the facial features of the Korean people, there is a wisdom and solemness that really appeals to me. The accuracy of the anatomy is first class and the attention to detail is what brings this sculpt to life, the crow feet wrinkles to the side of the eyes, the crease along the side of the nose and the bags under the eyes, are all naturally and realistically rendered. The head has a rather odd cut to it to allow it to fit to the neck and to receive the helm and neck guard. 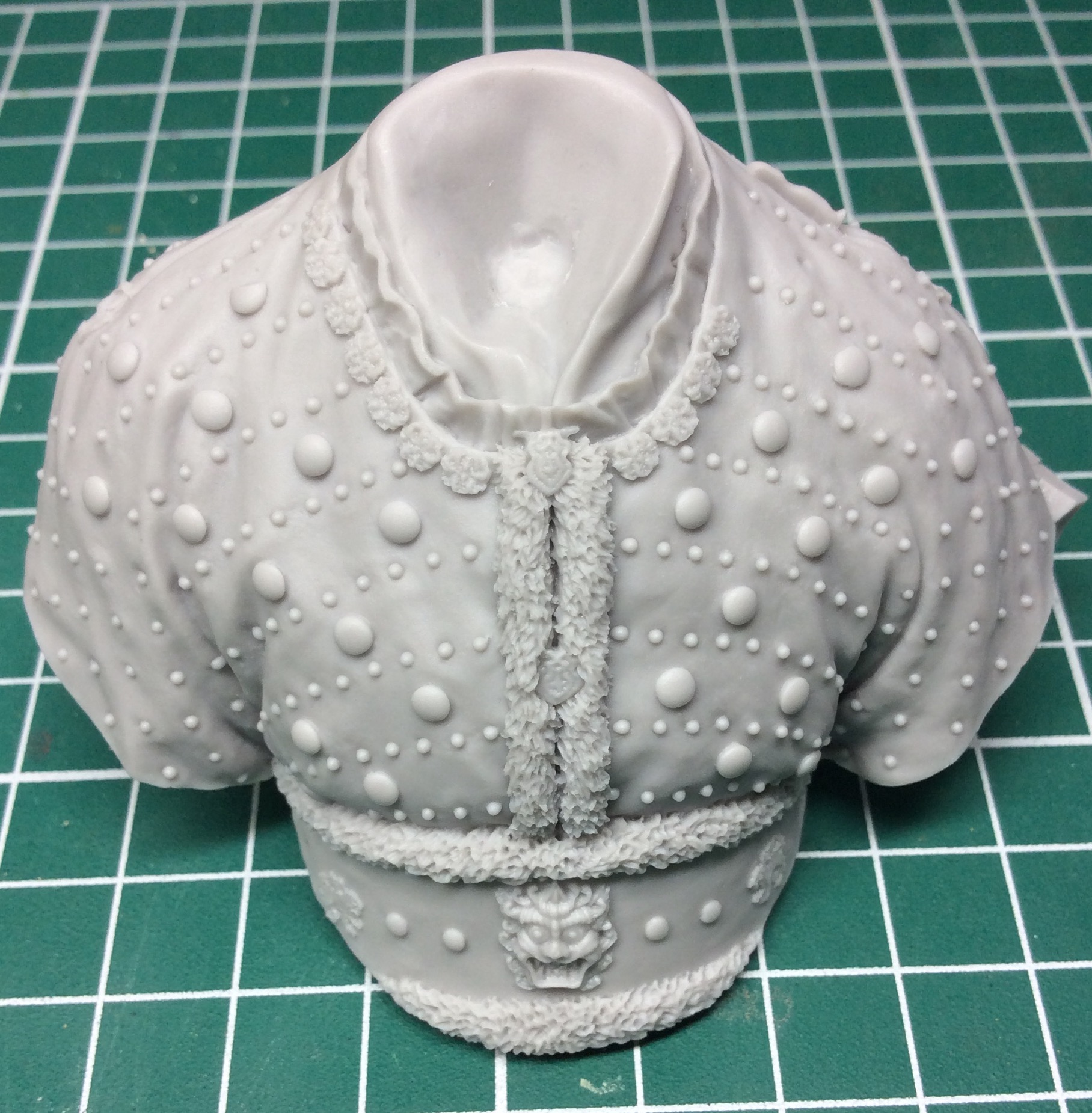 wonderful detailing throughout, especially to the thick, fur trimmed jacket

The tri panelled neckguard continues in the same design as the jacket with fur trim and studs, trailing down the neck and splaying out along the shoulders. The dome shaped helm is incredibly detailed with divided panels embossed at the front with dragons and phoenixes to the rear. The helm reaches up towards a small dome mount for the plume and trident sigil.

There is a separate piece to attach to the underside of the front rim, a nice fit to the groove and highly embossed once again. In addition you also need to attach the ornate peak to the helm which is quite narrow and delicate and sits within the slight gap left between the helm and the other piece we attached earlier. The bar to the plume has a small plug attached at the end which needs removing to allow it to be inserted in to the hole located at the helm dome top. 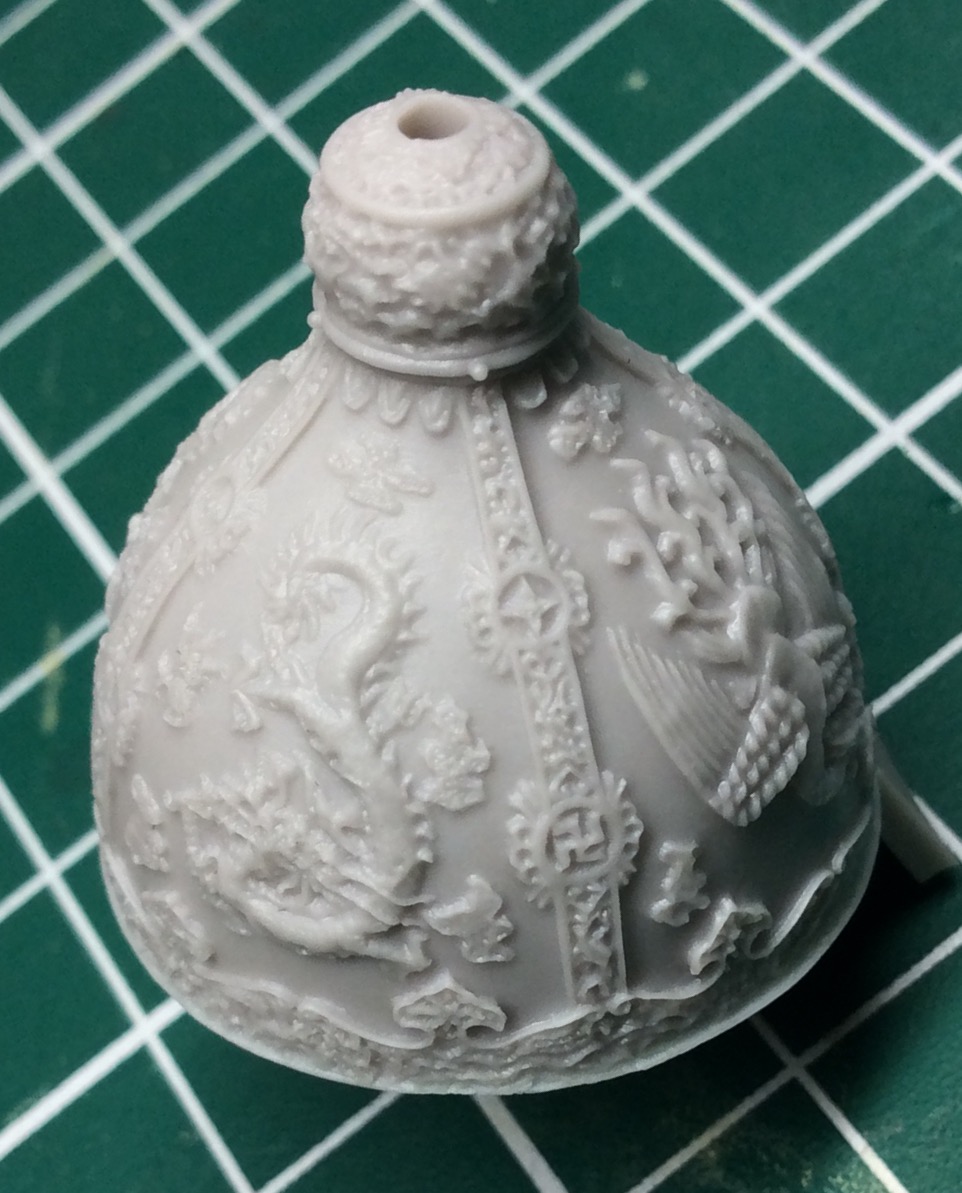 The plume is really nice and displays individual and clumps of hair and is sculpted with the same flourishes as the Admirals’ beard. Atop this we have an ornately, embossed sphere, once more with a hole at it’s apex to accept the trident head. There are just a few parts left to discuss, we have two flowing dragon icons that protrude from under the neck guard and sit in grooves along each shoulder. We also have the sword handle which has a wonderfully, intricate detailed wrap that criss-crosses it’s length and the Tang which sits at the base of the handle just before the start of the blade. The Tang is attached to a thin film of resin which will need removing, the attachment hole and the various holes around it’s circumference, integral to its’ design will need drilling out, at the very least you will need to do this to the central hole to attach to the sword handle.

The detailing throughout this kit is simply outstanding and as such, with it being a Korean subject from a Korean company it is a worthy addition to their catalogue! The cast is second to none, there are literally no defects and preparation will solely consist of removing and filing smooth the various resin casting plugs. What on first inspection looked a complex and advanced bust build actually turns out to be intricate yet simple and straightforward. Yi Sun-Sin comes highly recommended indeed!

This is a beautifully designed, traditional bust consisting head and shoulders. It is exquisitely detailed throughout with a great balance to the pose, which perfectly captures the martial prowess of this iconic Korean Naval Commander. Yi Sun-Sin is a quality bust of a subject that I have rarely seen before and is a perfect addition to the NutsPlanet catalogue. They continue to set the bar extremely high and figurementors.com highly recommends this piece.

NutsPlanet have an ever growing fanbase to match their rapidly expanding catalogue of diverse subjects and this bust is a definite standout kit. It will offer the painter several challenges but will overall make a wonderful addition to the display cabinet. It should appeal to historical figure painters in particular.

I am often surprised that kits of this quality go for the prices that they do, to consider that this kit has been researched, sketched, sculpted, cast, packaged and sent from Korea to your doorstep for about £50 or so on average is staggering. This kit costs $65 and I seriously consider it an item of Art and as such I believe offers good value for money!