The Soviet Female Tanker is the newest release to the BEGINNERS SERIES of 1/10 scale busts from Life Miniatures. The kit comprises of 7 Polyurethane Resin parts and is subject to a “how to” PDF explaining the painting process Sang-Eon Lee used for the boxart. The kit arrived in a sturdy, compact box adorned with the boxart upon the lid with other angles along its sides. The parts are sealed within ziplock bags nestled between layers of shaped foam. Although the bust is marketed as a BEGINNERS project, do not be fooled into thinking, the sculpt is anything less than highly detailed and faultless.

The bust is of a traditional styling, representing just the head and shoulders and cut to a “V” shape ending in a short  rectangular plinth. In the most part the kit consists of two main parts the upper torso and the head. Beginning with the torso we immediately see the crisp perfection prevalent in all of Life Miniatures products. It is the accuracy and subtlety of the detailing and anatomy that makes Sang-Eon Lee such a giant within the community. 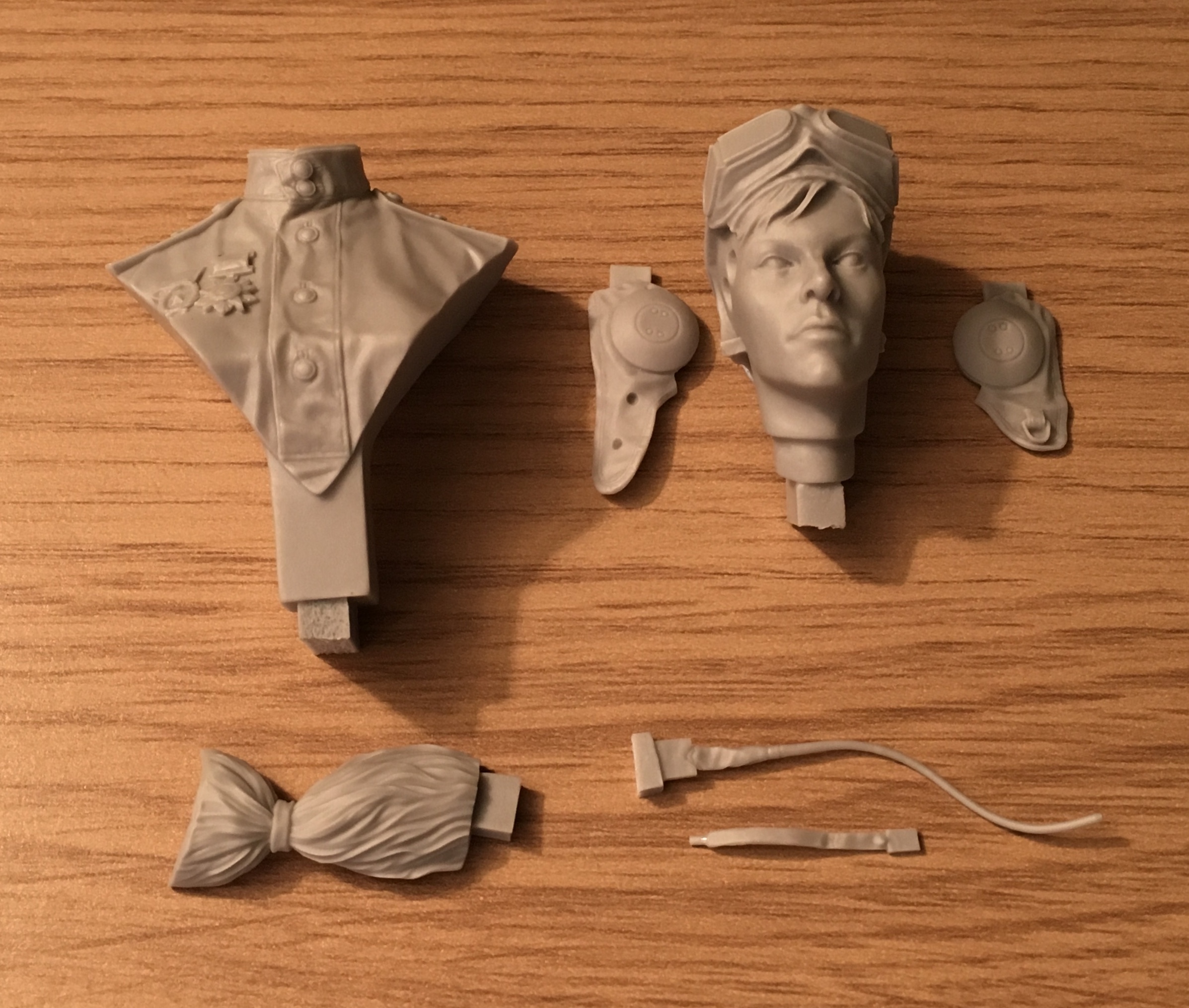 The high collared jacket sports realistic creases and folds especially the area beneath the lapels, decorated with her pips of rank. To the right chest we have her medals, intricately and delicately detailed with realistic finish. The rounded buttons cinch the fabric nicely and the collar is closed with double buttons, accurate seams to the tankers jacket throughout.

The head attaches snugly via a large peg and hole assembly, held high and looking slightly to her right. The facial features are wonderfully captured with attention to correct anatomy, with high cheek bones, slender jawline, delicate chin and straight nose. The eyes are perfectly rendered and should make painting them so much easier, the volume of the forehead is broken up with loose strands of hair drifting left and right. 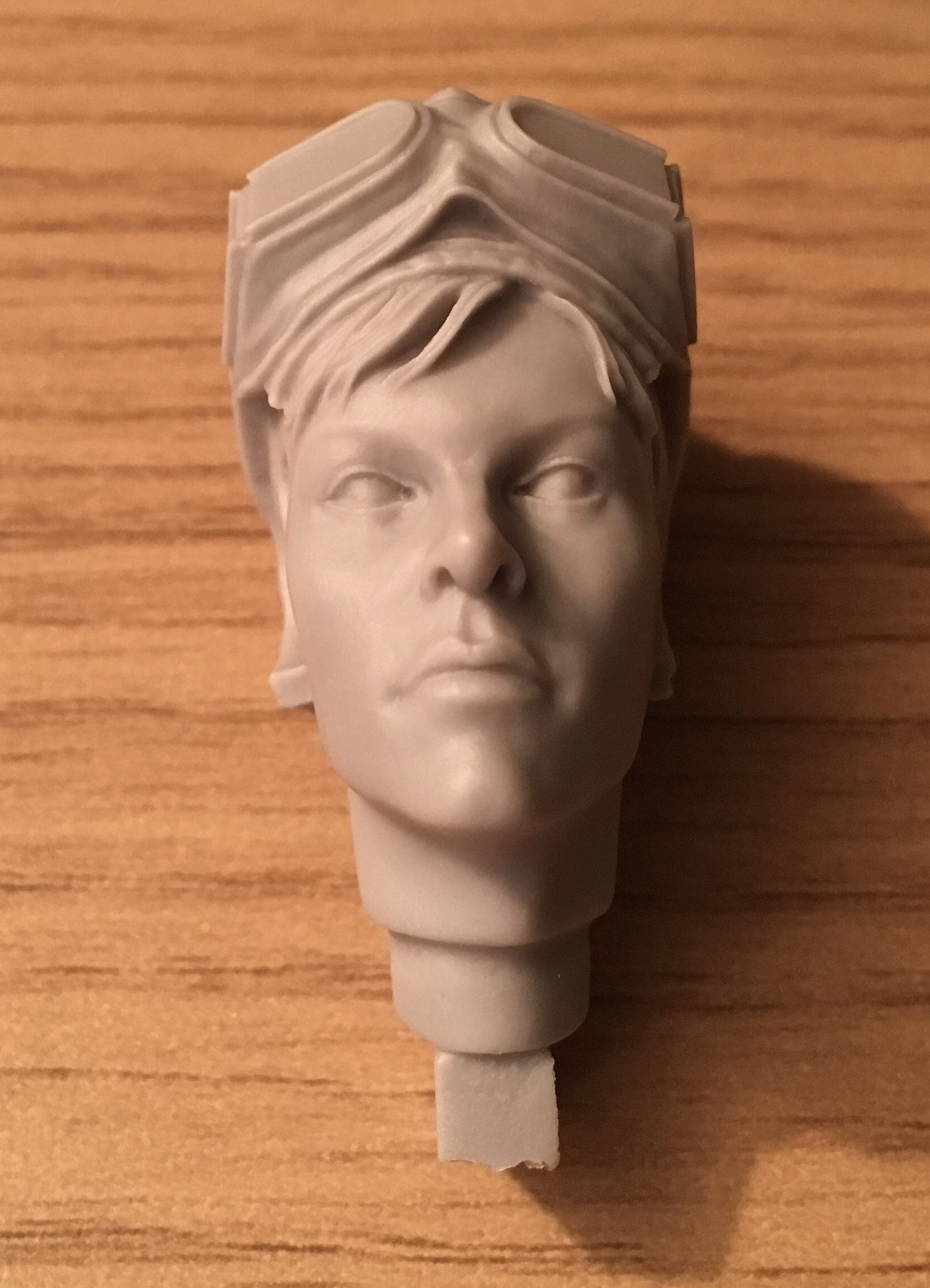 wonderful anatomy to the facial features

The tankers cap is itself a wonderful piece of sculpting, it’s soft casing has a flap to protect the neck which is buttoned and held up, with three thick leather bands that run the length of the cap to act as a cushion within the confines of the tank. The somewhat bulky goggles are held high upon the forehead with elasticated strap looping behind the head and beneath the buttoned neck flap. There are holes either side of her temples to receive the ear flaps, which have the circular ear protectors incorporated, accurate detailing throughout. We also have two different lengths of chin strap and a hair piece, held in a pony tail which fits flush to the base of her neck under the neck flap. The bottom of the pony tail has two studs that locate into holes upon the upper rear of the torso.

The casting is of the very highest standard with no deficiencies whatsoever, you will however, need to spend some time and effort cutting and filing smooth the casting plugs that are still attached to most of the parts. 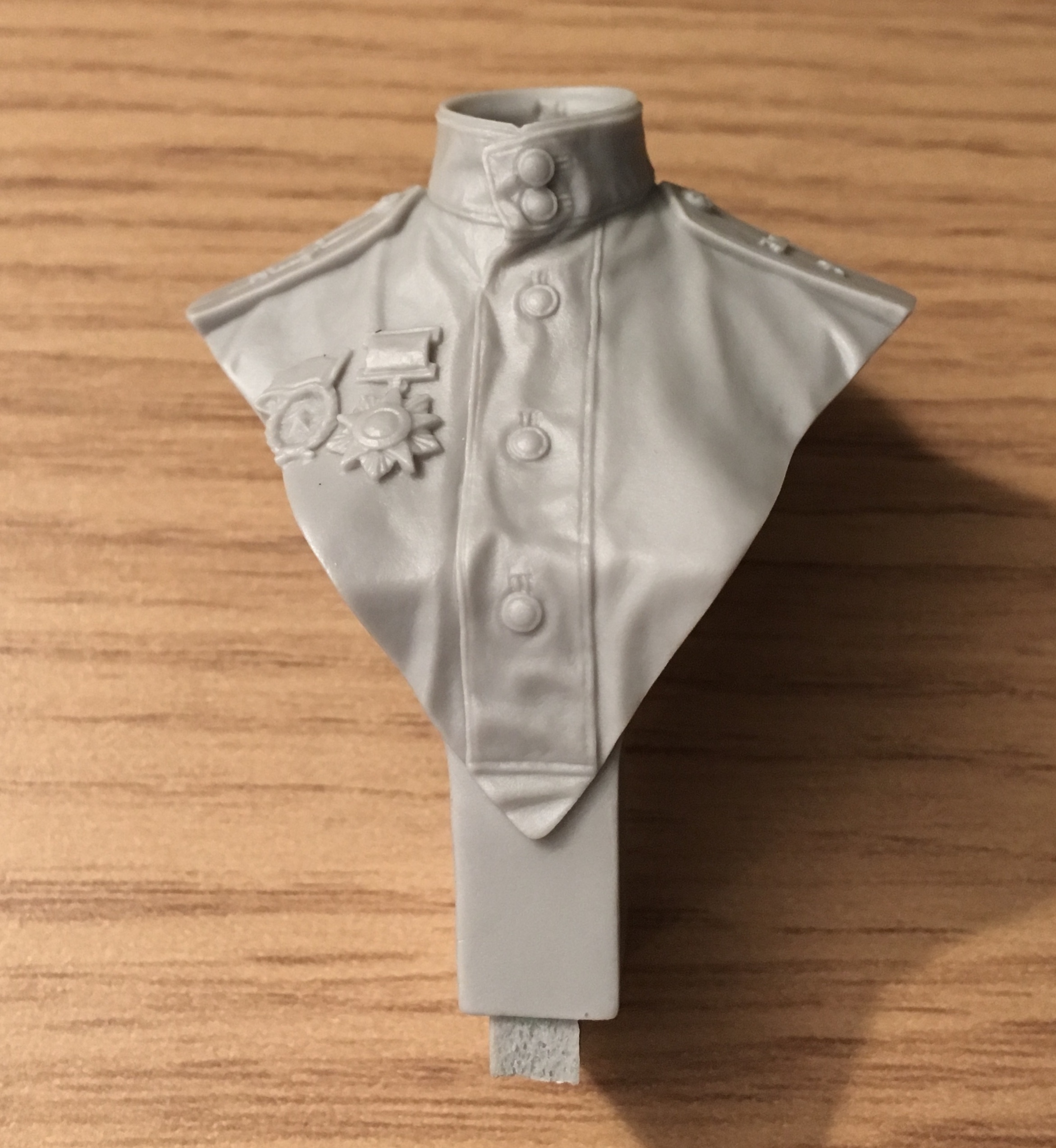 The design of the bust is traditional in its styling and therefore does not offer a dynamic or recognisable silhouette however, it is the subject matter that makes the piece original. The historical accuracy and level of detailing sets Life Miniatures apart and the smoothness of the kit offers a wonderful palette to the painter.

As I have already mentioned the subject matter is one I have rarely seen covered and is of a particularly interesting concept, a Female Tanker. Indeed I believe this sculpt depicts Aleksandra Samusenko, the only female tank commander of the 1st Guards Tank Army who following the Battle of Kursk received (the medals shows on this sculpt) the Order of the Patriotic War and the Order of the Red Star. She died in 1945 aged 23. 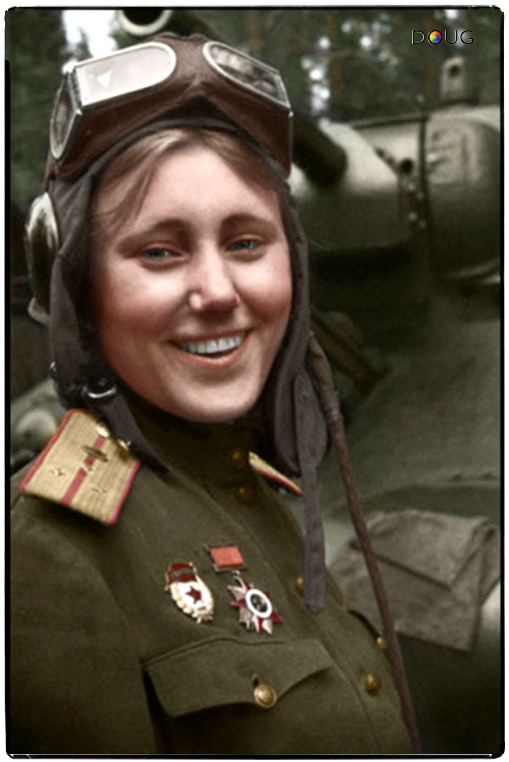 This series of busts would appeal to BEGINNERS looking to try their hand at something larger but also to the experienced competition painter. The quality of the cast and sculpt is first rate and the chance to work on the bust using the available PDF written by Sang-Eon Lee himself should be an interesting opportunity too. Despite it’s smaller size there is no lack of options here to produce a delightful project, crisp and accurate detailing, wonderful anatomy and facial features and that tankers helm is a piece of work in it’s own right.

This is once again a high end product with sublime sculpting and flawless casting a prerequisite of any product out of Life Miniatures and in many ways it comes with a high end price point, but as we all know, you get what you pay for. At $48 this represents a considerable investment for a smaller scale bust but the quality really makes the product worth every cent.