Today I am presenting two separate kits from MJ Miniatures but which have such common attributes I thought I would review them at the same time. We have two pairs of 1/35th scale WW2 soldiers, one set of Panzer Crew and one US Paratroopers. Both are cast in polyurethane resin and on opening the boxes you are presented with a wealth of parts. The boxes are relatively small, adorned with the box art by Man Jin Kim himself and the parts are in ziplock bags nestled between layers of foam. The parts are literally crammed in, in the main part due to the various accessories and head variants. The Panzer crew have the least of the parts but does come with a rather “snazzy” paper map that will look great once washed and weathered, super realistic. The casting looks very good indeed also.

Beginning with the Panzer crew, we have the commander plus one crew. The commander consists of just three parts, plus an additional head and the map. Dry fitting of the parts shows that the joins are perfect, no need for gap filling here. The uniform and it’s detailing is spot on, the short jacket, cinched tightly by the belt, the broad collar sporting insignia and the map case is a lovely detail too. The pips of rank on the lapels, the iron cross on the breast pocket, the commanders pistol holstered at the hip are all accurately presented and shows a great eye for detail in such small scale. I really like the strap and button pocket fasteners and the trousers are carried with realistic looking crease, the folds just above the boots really take me back to my Army days. There are holes in the shoulder but not a very good pin to the arm, not that I think they need pinning anyway. The arms are held in such a way to hold the map and I don’t see any difficulties with this either. The two heads display very nice facial features and all the detailing is very crisp.

The crew man is very similar in design and quality of sculpt and once more comprises of three parts plus the head variant. The detailing once again is wonderful, accurate seams, pockets, neckerchiefs, panelling to the tank boots etc. His pose is quite expressive as he seems to be pointing out an enemy position whilst the commander refers to the map. The mouth is slightly open and you can see nicely rendered teeth, there’s a frown to his expression also.

It is the US Paratroopers where we are almost overrun with parts, let’s take a further look. The main element for each is the body that includes the legs, then its a case of adding the arms, choosing your head variant and then attaching the various items of tooling. Once again the detailing to the uniforms is superb, realistic creases, folds, pockets, pouches and straps, with sharp undercuts throughout. The bare head versions are similar yet subtly different and we have two camo covered helmets.

On closer inspection I realised that both of my heads have the top of the head chopped off, to affix the helmet, in other words I have three cut offs and one with hair. A quick message to MJ meant id get the replacement head in the kit from them, nice touch!! The texturing throughout is very nice too and the gloves are another indicator of the attention to detail. The right arm holds the rifle in the crook of the inner arm with left arm relaxed down by the side. There is a variety of accessories including grenade, trench tool, knapsack, water bottle, field dressing and additional pouches. Once more the detailing for this size is exceptional and the cast is top quality!

I think these are a very clever idea, they will appeal to figure painters but also to those that want to populate a dio or vignette, and due to their poses and active design, it will be a great way to add narrative. They have been designed in such a way also that if placed together they clearly form an action yet they could also be placed in separate elements within the same vignette or dio. It is obviously difficult to consider them original when they are referencing WW2 subjects however, the idea of using them to populate 1/35th armour projects makes them quite refreshing. Too often I see armour subjects with poor stock figures, so for anyone wanting to up their figure game, these are ideal.

As I have already discussed, these will clearly appeal to figure painters and armour modellers alike, in particular those with an interest of WW2. The level of detail really is second to none and the sheer volume of accessories makes the Paratroopers kit particularly flexible. 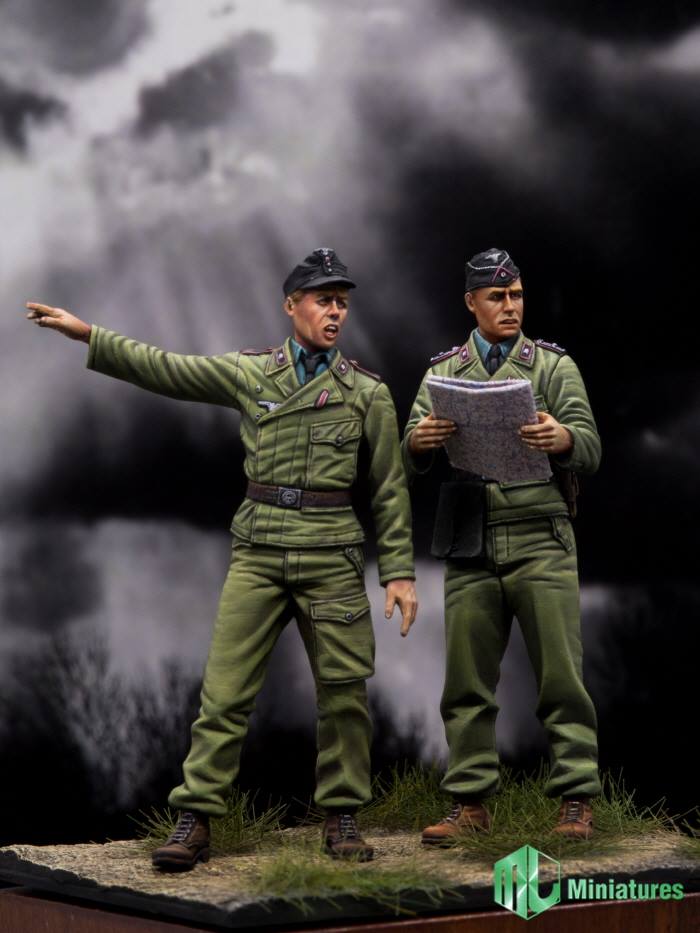 Each set costs $27 which I think is a very good price, in addition each figure can be bought separately at $15 each HERE. These are a great option for painters looking at trying their first WW2 projects or even the Armour modeller looking for the perfect accompanying figures to a scene. Highly detailed, believable interactions, great design and a super crisp casting that is all too often soft and fuzzy in this smaller scale. Highly recommended.