DG Artwork are always looking to create something’s new and original for their loyal fan base and the World Military Academy Series is yet another good idea as it opens up the opportunity of a series of releases. Imagine a whole display of these, of same subject matter, all painted up and upon their plinths?! We are going to look at No1 and No2, West Point and Sandhurst respectively.

These are 1/12 in scale so should prove quicker to paint up, the first consisted of three parts, the second with four, but both on first inspection look particularly simple to assemble. Each came in their attractive boxes adorned with the box art by Dae-Hyeong Kim himself, with further angles of the box art presented along the sides. The parts are sealed in ziplock bags then safely wrapped up inside bubble wrap.

DUTY, HONOUR AND COUNTRY is the motto of the Westpoint Academy and the sculpt captures that well, starched, upright and polished. The first of this World Military Academy Series consists of four parts, torso with head, cap, the ceremonial cap known as the tar bucket and chin strap. 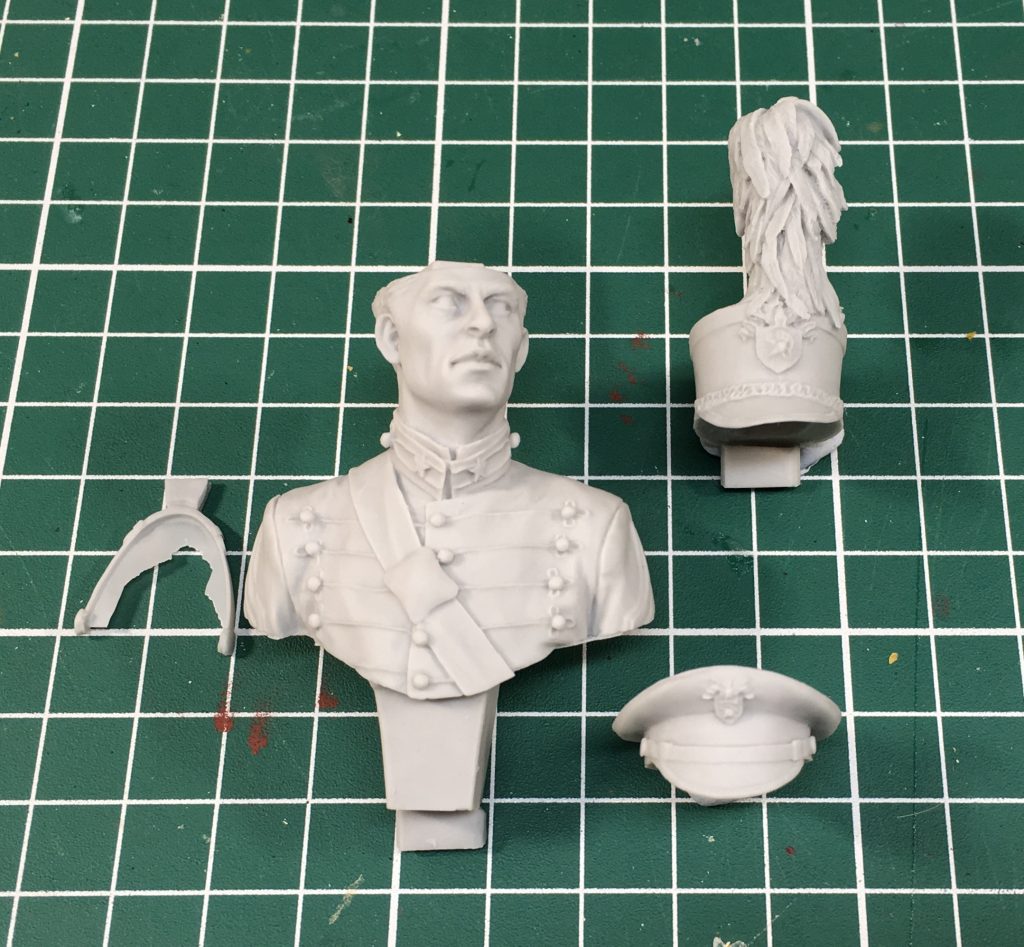 The bust is of the traditional styling, presenting just head and shoulders, it’s a one piece cast with nice detailing throughout. The seams are present and correct and the dress jacket also shows realistic creases and folds along with braiding and round ball buttons. The lacing to the jackets front ends in trefoils and that to the collar is accompanied with a star on each profile. Across the chest we have the broad cross belt with plain brass plate displaying sharp and clean under cuts. 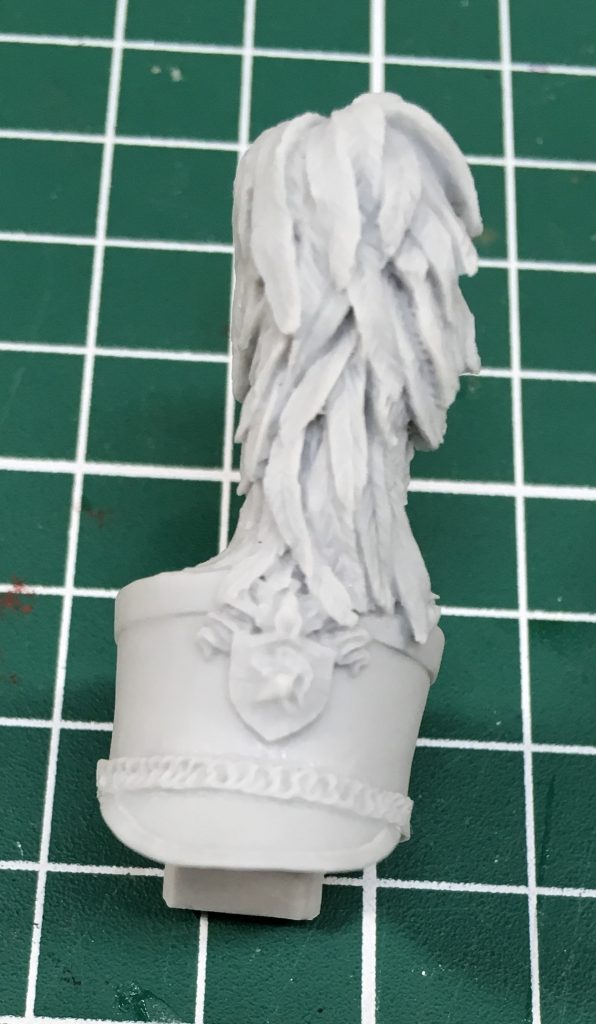 The face is nicely sculpted depicting a young, serious looking cadet with nice facial features. The eyes are particularly well done which is always a bonus, painting eyes correctly is difficult enough but the sculpt and cast on this will definitely be of invaluable help. The hair is presented neat and tidy not cropped short and we have two choices of cap. The first is the plain soft cap, with banded, strapped peak, nice strap and button detail with the Academy badge to the centre. The second is the parade ground cap which due to its extravagance will be particularly popular to those that paint this bust. The height of the cap along with the cockerel feather plume should make this part quite a piece of Art in its own right. The chin strap has some excess resin attached to it and will require careful removal. There is the usual clean up involved but there are no major defects such as air bubble holes or casting slippages.

The second bust portrays a young recruit at Sandhurst selected for commission and who I believe has already passed P Company as evidenced with the wings upon upper, right arm. There is a medal, attached to the right, breast pocket along with a sash that crosses his chest right to left. The shaped pedestal to the bust is a very nice touch and I’m unsure why it wasn’t done on No1 too. Meaning the Academy badge that is sculpted in relief there, looks very nice indeed. Unlike the first, this bust comes with separate head and just the one peaked cap which again shows very nice detailing along the rim, the central band to which is mounted the badge and the peak itself. 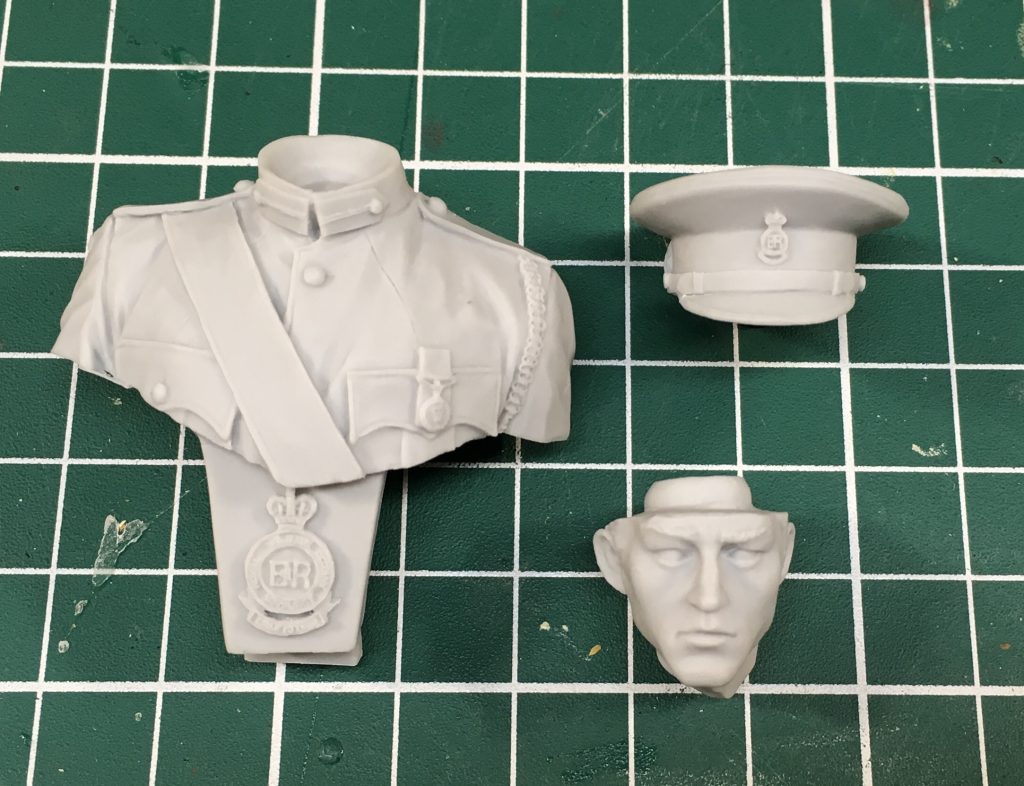 Sandhurst kit in full, note the badge on the pedestal

Folds, creases and seams are once again nicely presented, not over done and very realistic. The head to this bust is possibly my favourite of all those sculpted by DG, the anatomy, bone structure, the subtle musculature around the jawline are all very nicely done. The fit of the cap to the head is perfect and the head attaches to the torso looking slightly to the right.

Again the cast is very nice with no major defect although there are some minor mold lines and as with the other bust there are the remains of casting plugs that will need cutting away and filing smooth. 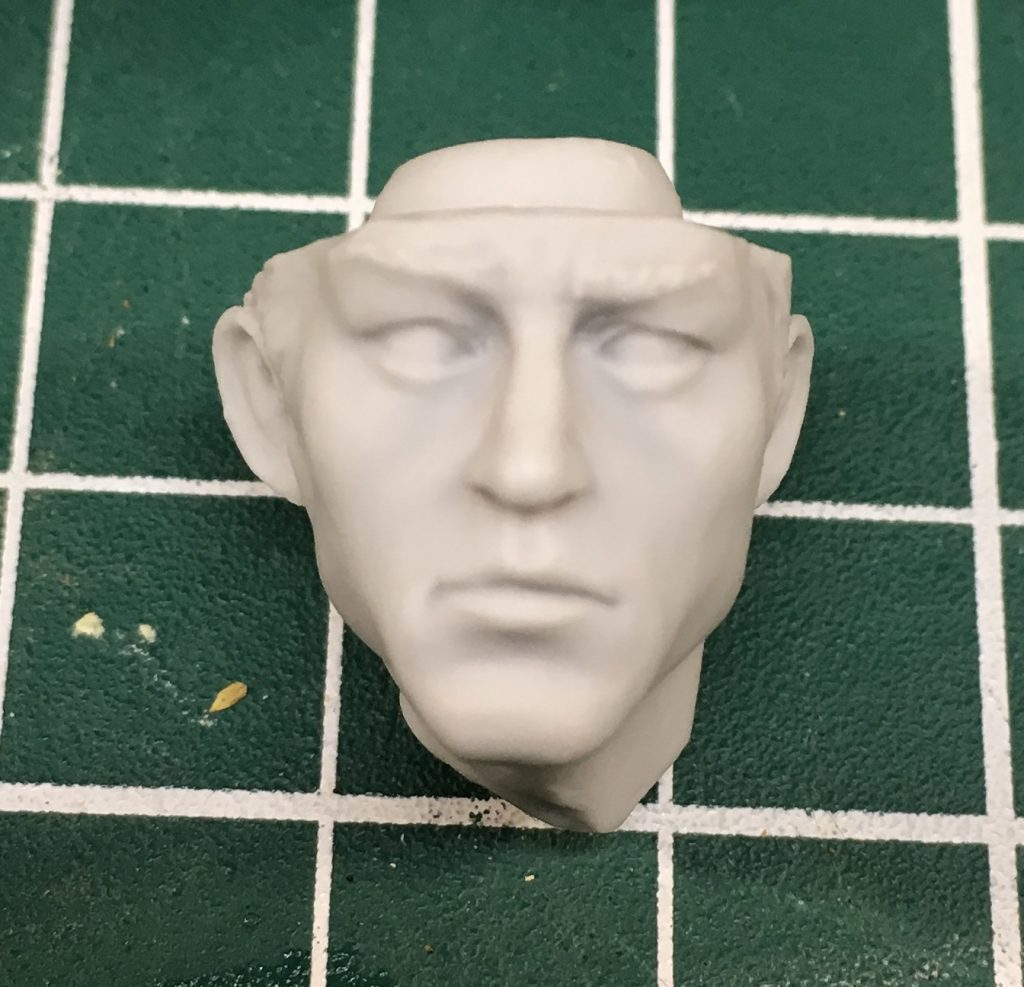 super sculpt to the facial features

I really like this idea, although the subject matter does not appeal to me, a similar approach say to Celtic Warriors or Officers of the Napoleonic War for instance would be awesome! The design of each bust is simple, classical in the head and shoulders only pose with nice silhouettes to both. They will look great painted up as a set, I believe No3 was recently released also. DG Artwork are prolific in their releases and always looking to represent new subject matter in resin. I think it’s this approach that makes them a manufacturer of several original ideas.

Anyone with a military interest will find these desirable and have an interest in adding to their grey army. The opportunity to paint these up as a series is quite appealing too, creating a long term project. The relative small scale of these busts, with their simplistic assembly would also offer quick projects to the experienced bust painter or a great introduction to larger scale projects for those who are yet to make the transition.

At just $25 I believe these represent great value for money! The sculpt, cast and packaging are very good indeed and so the price point is hugely competitive. A fun project with a particularly affordable price, recommended!!