Weird Armies Reign (WAR) and now for something different!

WAR is a relatively new company out of Athens, Greece that creates 1/35 scale, highly detailed figures to populate their alternative history set during World War II, a kind of dieselpunk, post apocalyptic, “what if” scenario. I spoke with Christos Apostolopoulos what seems an age ago now as I was considering doing a diorama involving vehicles and 1/35 scale figures in a “what if” scenario. My interest in this type of scenario was piqued by modeller and creative whizz, Yen Kwie Drenth who had written such a piece for us back in 2016, you can read that article HERE.

I was sent four items, each in the very distinctive yellow and black “Biohazard” packaging, the box lid being adorned with a graphic depicting the contents. Casting, which seems very good, is done in Greece by Masterpieces and sculpted by Christos himself. I have two boxes titled “Soviet Recycled Troops” and “Soviet – Asian Coalition Tank Crew ’46”, in other words we have the zombies and the human fighting forces. Each is generally accompanied with an “extra” piece whether it’s a discarded teddy bear or a zombie emerging from a mound of dirt, along with small transfers. 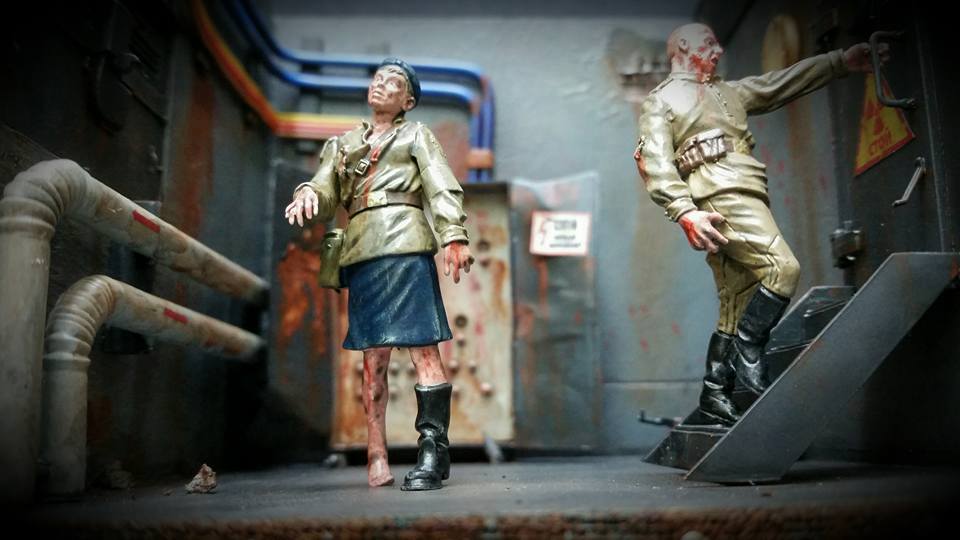 One observation other than the good quality of the sculpt and cast is that the one size fits all box can be a little oversized and clumsy looking. However, the presentation throughout is very good and the brand is very clear and well thought out.

The sculpt and cast are of a high standard throughout and the complexity of the figures ranges from single or two part pieces to multi parts and various head options. Let’s look at the zombies first, I really like these! Both of these figures consist of three parts, the body and two arms and are full of little details that reveal their zombie status. The female looks like a Medic for reasons I am not overly sure of, the beret, belted jacket, the shoulder slung satchel all display nice details, sharp undercuts to straps and an accuracy more associated with the larger scales. My wife Kerri actually pointed out to me that there are stars on the cap and belt buckle, damn that is some fine detailing. 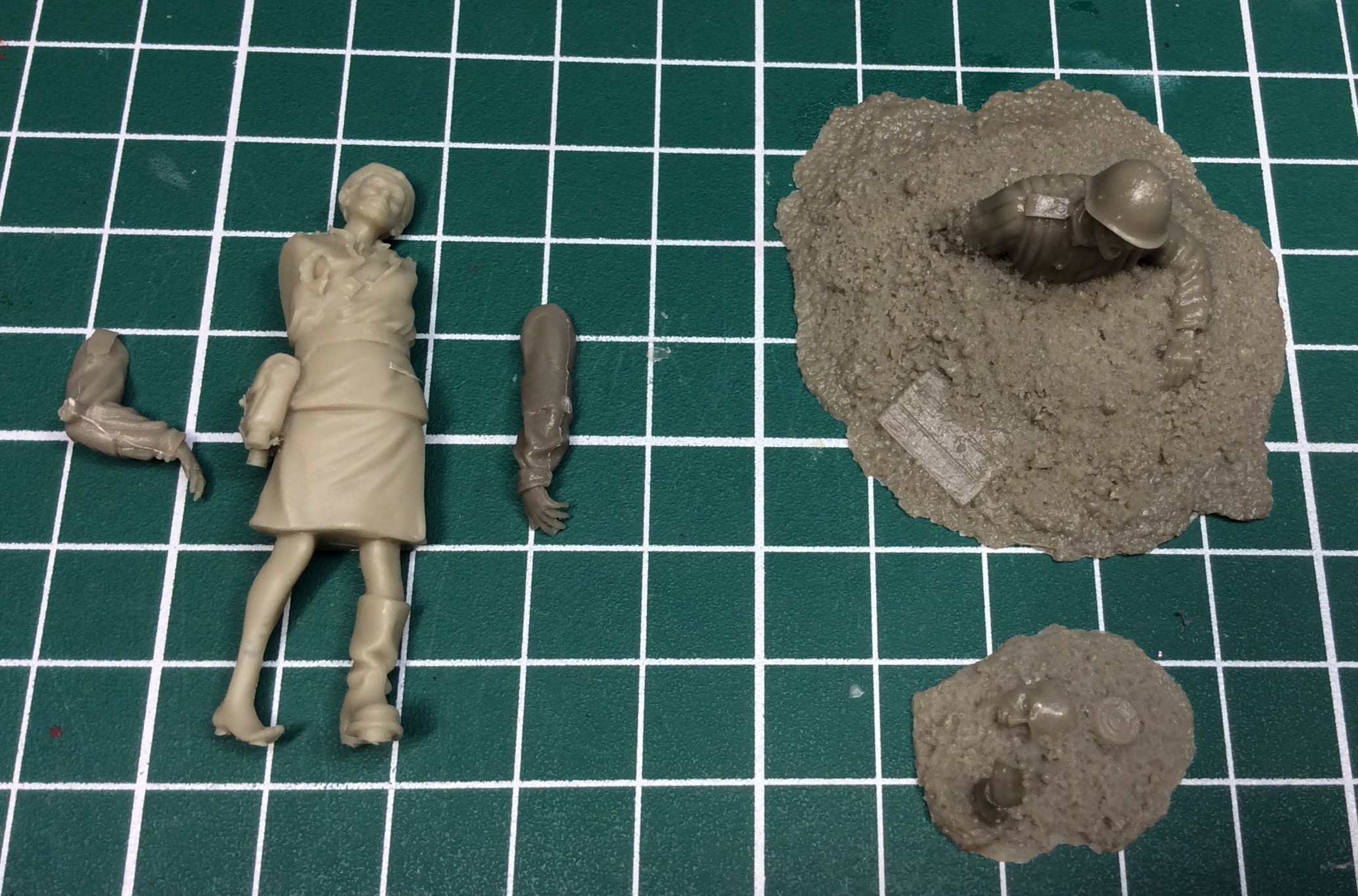 The facial features are gaunt, with high cheek bones and deep set eye sockets to hint at the change her physiology has gone through. The head is tilted to the side, neck straining to her left. The leg joints turned inwards and the right foot dragged, twisted along the ground all help to tell a story and leave us under no illusion that she is a zombie. The gash to her right leg and the missing boot help to complete the story. The arms attach, flat surface to flat surface, but the sculpting is such that you can line up the folds of the jacket to understand exactly how to position the arms correctly.

This particular kit is accompanied by two additional “zombies” are should I say sections. We have the outstretched arm and reaching hand out of the ground and a larger piece that shows the upper body of a soldier with helmet. 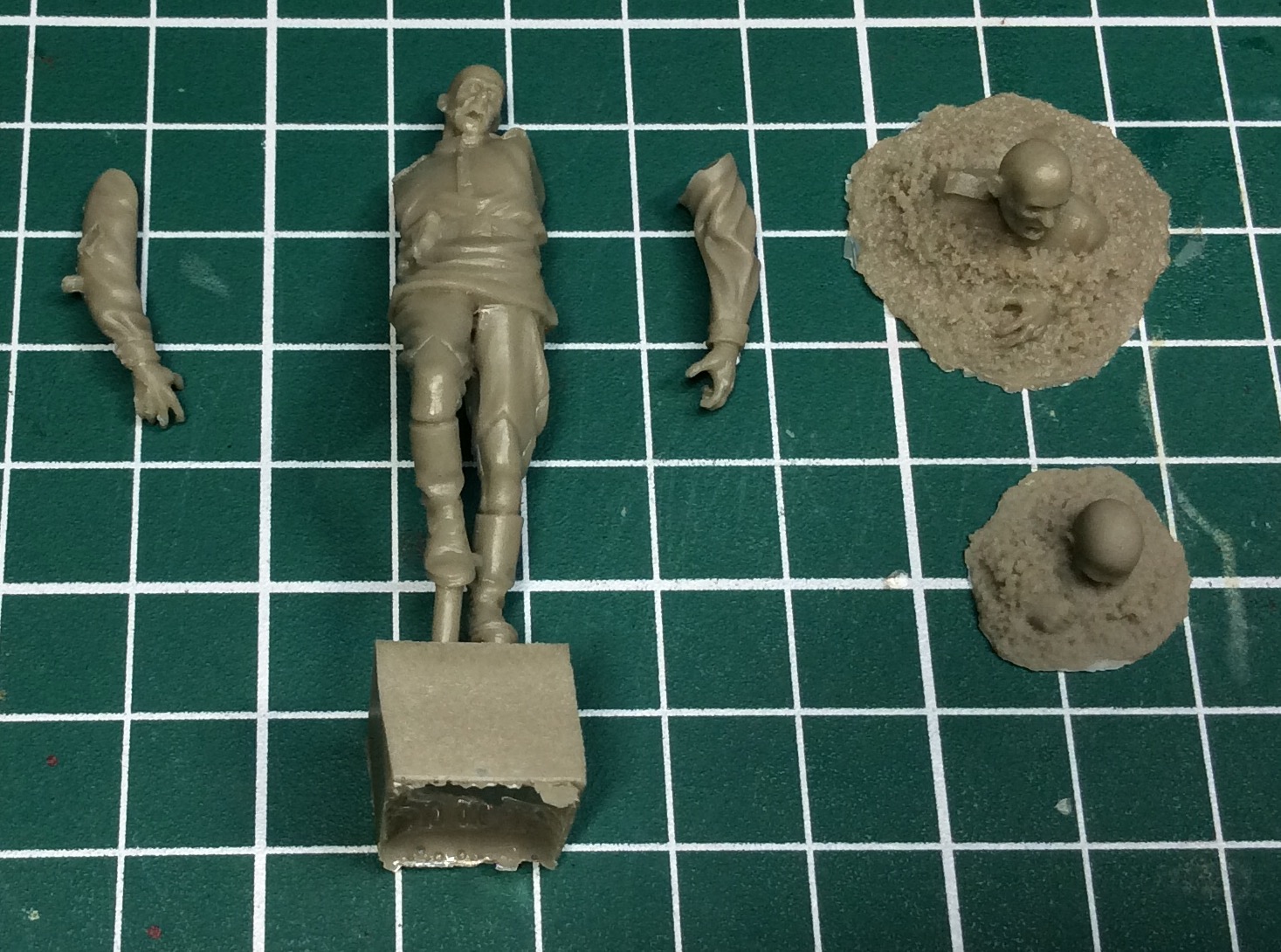 And the male too … the extras are a nice touch

Our second zombie is a male soldier sporting once more the deformed facial features and anatomy, the mouth is twisted in some sort of rictus grin, you can almost hear the groaning! The pose to such a tiny figure is particularly dynamic and the detailing to the waist length jacket, trousers and knee high boots is very nice too, with realistic looking creases and folds present where necessary. The belt, pouches and water bottle are additional nice touches and I particularly like the cinching of the material where the smock is pulled in at the sides and pushed to the rear (brings back memories of the parade ground that’s for sure). The grasping fingers and reaching left arm further strengthen the whole zombie vibe.

This zombie comes with a partially revealed head and a second that is exposed down to the shoulders, telling how more and more of the post apocalyptic, military zombies are rising from the battle field. 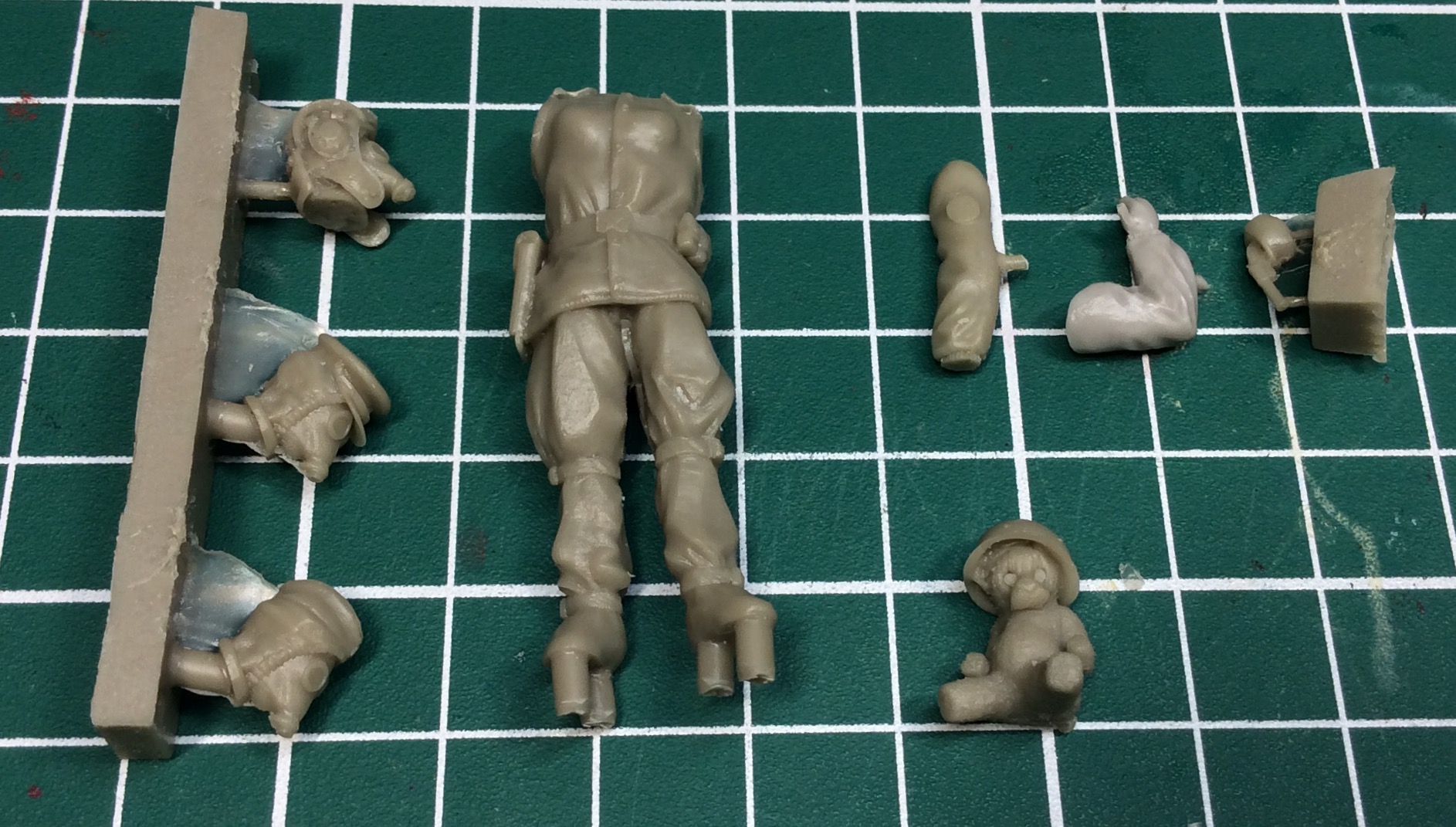 The first of the tank crew looks surprisingly accurate regarding the uniform of tankers, the padded combat trousers, tight smock with service pistol holstered at the right hand side hip. The left arm hangs down by the side and there is a delicately sculpted hand holding a small revolver whilst the left is bent at the elbow and raised towards the eyes, maybe shielding her eyes from the sun or looking into the distance. The figure comes with three completely different head options, from the peaked cap to the compete tankers helm with mouthpiece, comms unit and night vision goggles. The “piece de resistance” for this particular kit is the wonderful little teddy bear wearing it’s very own gas mask and tin helmet!

I must admit to a little uncertainty to what some of the parts are and where they go for the fourth figure (theres a small sprue of tiny parts which I actually believe to be Service Medals!) but in general it carries the trademark high level of detailing and accuracy. The smock displays seams, lapels, elasticated waistline, zipped and buttoned. The low hanging shoulder strapped, duffel is full of intricate details and the belt at the waist cuts into the smock in a realistic manner, creating creases and folds that are realistic looking and not overdone. The right arm is raised and attaching the hand shows he is clearly pointing which ties in with the left hand which is holding a set of binoculars. 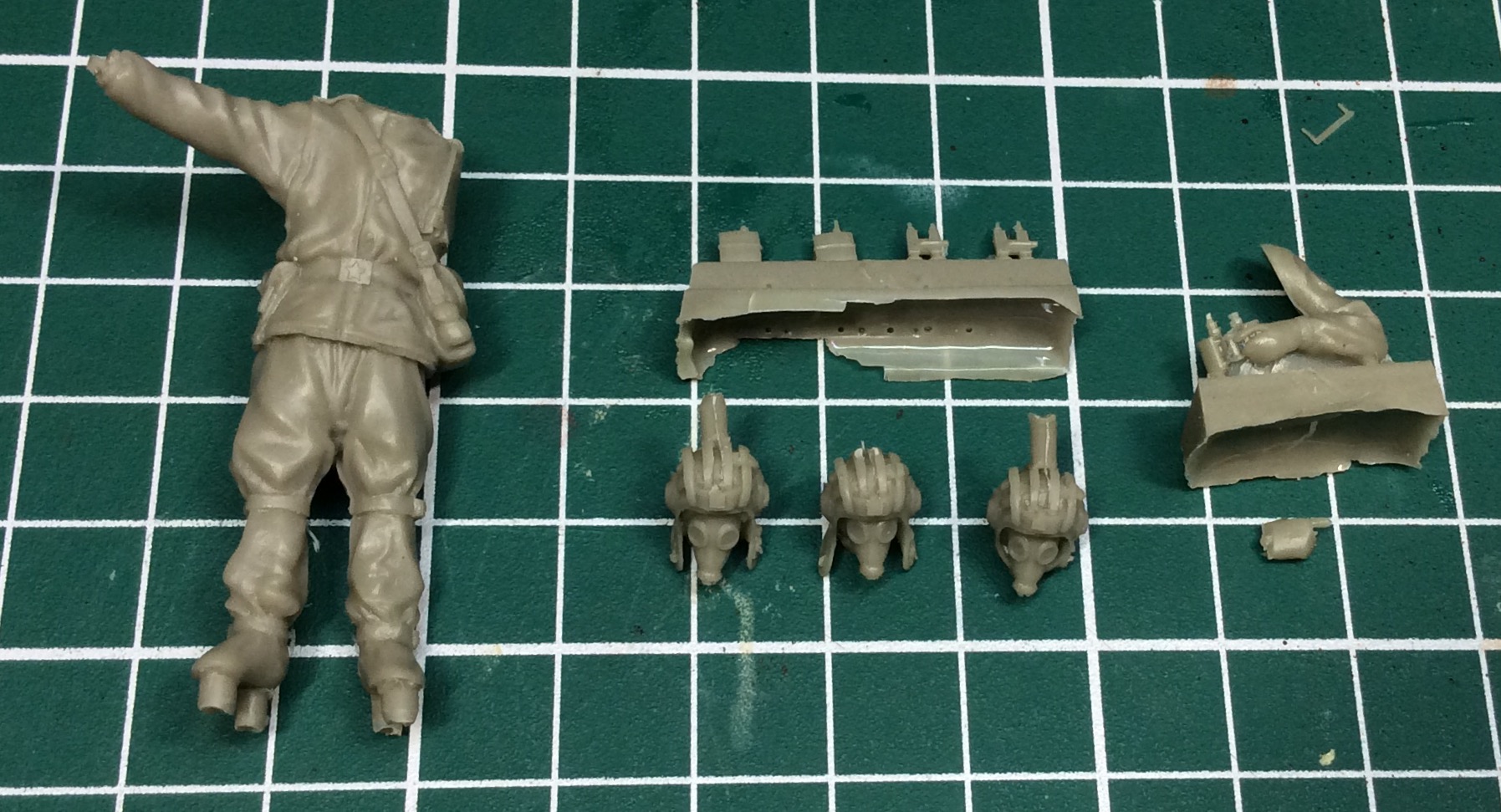 you can clearly see the intricate detailing to the head types

Again we have a choice of three heads, highly detailed and believable, in addition to the figure this time we have the upper torso of a Tank Commander, so could easily be incorporated into a vehicle of the correct scale. Indeed that is the very beauty of these figures and the creative freedom they offer to produce a unique “what if” scenario, with these figure it truly is a case of your only limit is your level of creativity.

The whole idea I believe is very well thought out, the detailing is crisp, the cast is nigh on flawless and concept is new and refreshing. It has merged the ever popular zombie culture with a growing trend in armour modelling and figure painting, that of the “what if” scenario. The figures can be painted as individual pieces, a vignette with multiple figures or even used to populate a scene with vehicles including tanks. I have not seen something similar in our little hobby world.

Desirability and affordability are even more subjective than whether a kit is attractive, or nicely presented etc but I believe that you could do far worse if you were looking to create a “what if”, alternative history scenario, picking these kits up. It will definitely appeal to those with an interest in post apocalyptic warscapes, zombies and a host of other possibilities if a little imagination is used. However, do not think that these are just some sort of a gimic, these are delicately, accurately sculpted and cast 1/35 figures that have more than enough about them to produce a stunning painted miniature.

I don’t think it is possible to create a concept, sculpt and cast a figure, package it and sell for much less than €17, so I think these offer great value.