Games Workshop has just released a new version of their old game Adeptus Titanicus and the miniatures to go with it. Well to begin with we have the Warlord Titan and a pack of three knights. A reaver and a Warhound are sure to follow and probably more besides.

Adeptus Titanicus is a game about the big titans clashing and fighting each other. The god machines fighting rendering mere humans and their tanks insignificant. Originally the game Epic Spacemarine grew from this depicting the other aspects of the battlefield, making for huge battles with huge machines as well as ordinary soldiers. Adeptus Titanicus on the other hand is all about the godmachines, the Titans fighting each other, so no small soldiers here… The warlord Titan was the most iconic of the titans, the flagship of the game and the range of miniatures for it. The one that set the benchmark for all titan models.

What we have here is the Warlord Titan for the new Adeptus Titanicus! And it has been awaited for with anticipation. 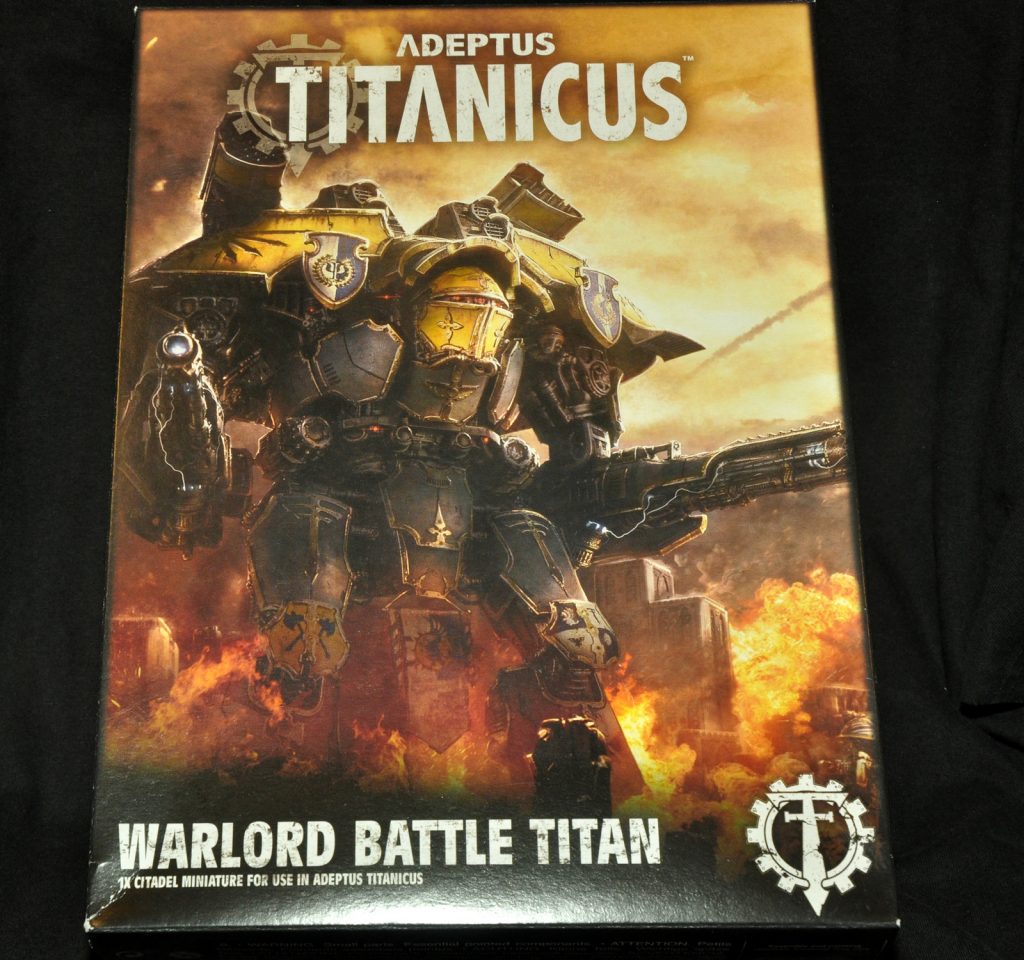 Originally Adeptus Titanicus was made in 6mm scale making for rather small models all around. This time it is more like 8mm, so they get beefed up a little so to speak. Games Workshop have taken the designs of the huge Forgeworld titans for Warhammer 40K and scaled them down to this size as well as their knight models and scaled them down as well, so here the knight model is about the size of a spacemarine and the Warlord Titan is a little smaller than the knight for 40K.

They are scaled down directly, really just smaller versions of the Forgeworld ones! Very interesting in my opinion, as I will probably never get to make one of the big ones from Forgeworld, at least now I can make a Titan anyway.

I for one really like this concept. The Forgeworld Titans and many pieces of artwork have over the years come to define the look of these Titans, so there is really no reason to start to make them differently as opposed to the ones in the early days, when the design was more loose. I must say I find the resemblance uncanny, they have really captured it. I think it is great with an opportunity to make one of these without having to spend the amount of money and time that the titans from Forgeworld need. 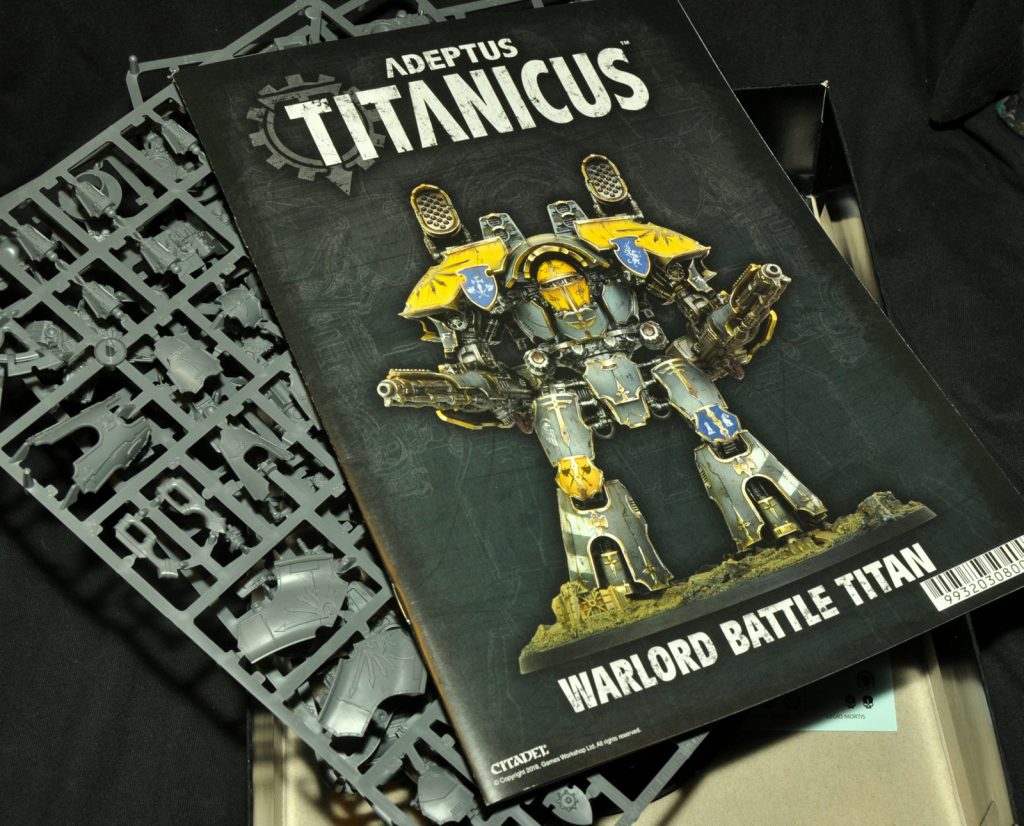 The kit comes in a cardboard box, just as all the big GW kits do. There is a nice cover art painting on the front, showing a loyal Warlord Titan blazing away at the enemy and on the back we see a picture of the assembled kit in the livery of one of the traitor Titan Legions, nicely showing the alternative ways to finish the model. There are nice paintings on the side of the box, showing the same different versions of the Titan. There is an inner box that slide out of this outer box, making for a sturdy and protective package. In the inner box we find three sprues of the usual mid grey plastic we know from most GW kits. There are a lot! Of small parts on these sprues, this looks like quite a complex kit. The sprues seem to be organised in different parts of the overall assembly, one with mainly the parts for the inner skeleton of the Titan, one with the outer carapace armour and one with the two head options and the weapons. Apart from these sprues we find the building instructions, a large oval base and a decal sheet. 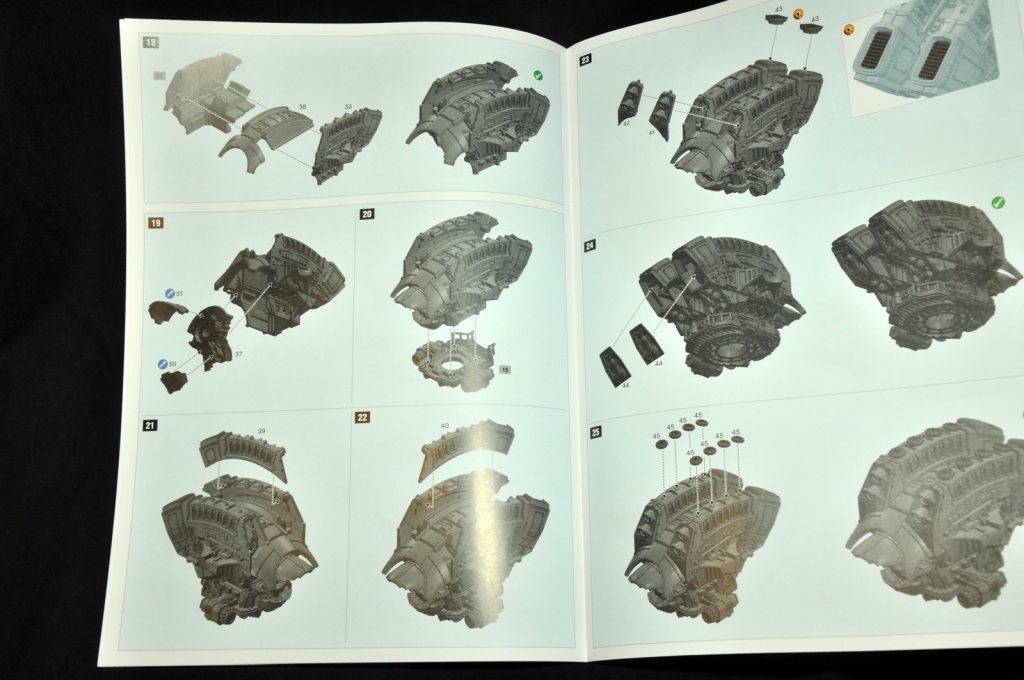 QUALITY OF CAST AND ENGINEERING

Let’s take a look at those sprues of grey plastic. This is a big multipart plastic kit consisting of 142 parts and a base. Everything is crisply moulded grey polystyrene, just as we have come to expect from Games Workshop. The details are sharp and precise. Very nicely reproduced in the plastic. There are two head options, one leader-like with a cross symbol on the cheeks and one without. We have three different choices for the shoulder plates, one with a mechanicum symbol for the loyalists, one with Horus’s eye symbol for the traitors and one smooth one for freehand painting, which is a lovely touch indeed! I could have wished for some different weapon options, but maybe they’ll release an upgrade pack at some point in the future.

All the limbs of the figure are posable, so we can make our Titans more or less animated. All their heavy armour do inhibit the posabillity a little, but it still it makes a big difference and we can make them in a variety of poses. There are a few mould lines on the model, but they are small and discreet. Many are placed in a smart way, where they will be hidden, so clean up of this model is a breeze.

Construction of the Titan itself is also done quite cleverly, with many parts overlapping and supporting each other, making for an intricate design but still a sturdy build. Perfect for the gaming table as well as for the collector, it would like a nice and convincing model.

The parts fit perfectly, building this model I had no fit issues what so ever, in this regard I am very impressed with this kit indeed. 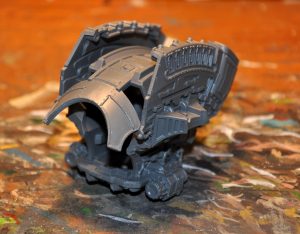 The torso of my model

The Warlord Titan sure does look the part, it looks like this big godlike war machine, exactly like it is supposed to be. It is an iconic design, it is the flagship of it’s kind. A tried and tested design. Nothing new here, this is an exact scaled down replica of the Forge World Titan. It has exactly the same silhouette and many of the same details and design features. It is a perfect rendition of a well-known original design of Games Workshop. I know some people may not share my opinion of this but I find this model very original.

The Titans are part of the 40K canon and very much GW’s own invention and design. The design of the Titans have been refined and developed over the years, culminating in the big ones from Forgeworld. In my opinion there is no reason to deviate from that design, it is all there and in the case of the big ones purely original. As this scaled down version, this kit works perfectly in my opinion and is exactly what it promises to be.

As a collector of Games Workshop models and occasional player of their games, I find this model very desirable indeed. It even evokes nostalgic memories of my early days in the hobby by being part of the resurrection of the old Adeptus Titanicus game.

At 65£ this is by no means a cheap model! This is the standard price of this size of kit from Games Workshop. Thinking of the many hours of fun I had building and painting this kit and the crispness of detail and moulding and also considering the impeccable parts fit, I’d say it is worth the money.

I built and painted my Warlord Titan. It took me about 35 hours all told. It went together very nicely without any fit issues. I did assemble some parts in another order than the way they are described in the instructions for ease of painting. I recommend building the entire skeleton of the model and paint this as a whole and then paint all the outer armour plates separately. Due to the very clear building instructions I did not have any difficulties assembling the kit even though it is a rather complex one. It is recommended for ages 16 and up on the box and instructions and that is the appropriate age recommendation in my opinion. I painted mine in the livery of Legio Mortis, a traitor Titan legion, that has followed close to Horus the arch-traitor since before the Heresy. For one who has read many of the Horus Heresy books and generally read a lot of the 40K background, this is a very iconic model to make. I did grind some holes of corrosion into many of the armour plates to symbolise the taint of Chaos seeping through the machine.

It was all in all a very satisfying kit to build and has now pride of place on my display shelf. Now sometime I’ll get another one to make as a loyalist… 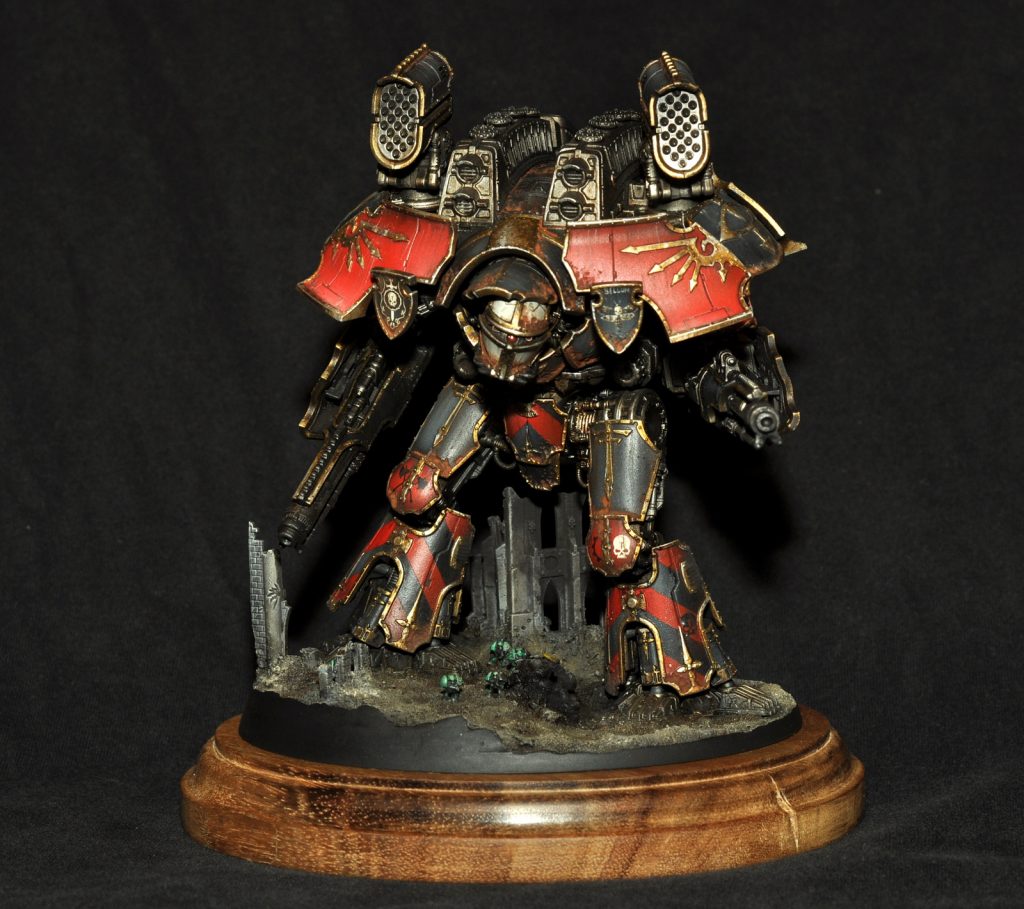 Dates and Figures and Stuff