“With so much happening recently and me not really being in love with Games Workshop and some of their releases I didn’t manage to attend Golden Demon this year  . Which in hindsight was a shame as it would have given me a chance to catch p with some of our super star painters and celebrities from our awesome community. Maybe next year, as I definitely have my eye on some cool miniatures to paint over the next twelve months or so. I really wanted to know what this year was like though so I asked Jamie Tranter of Rubicon Models and Savage Forged Games to check it out for me and this is what he had to say about Warhammer Fest. Congratulations to David Soper for his third Slayer Sword, stay tuned for an exclusive interview soon! (Ed.)”. 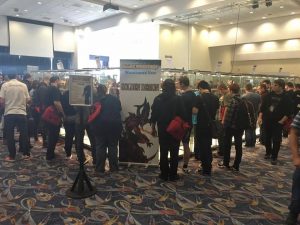 So guys, unless you’ve been living under a rock you will know that this weekend was Warhammer Fest: Games Workshops re-branding of the Games Day events of the past couple of decades.   I was lucky enough to attend the Sunday, which coincides with Golden Demon and when Jason asked me to do a write up I jumped at the chance.

Having missed last years: but having attended two Games Days, two Forgeworld Open Days, and a Horus Heresy weekender in the last 5 years: I feel we can make some interesting conclusions about the event.

This write up won’t share much of the miniature related news: we’ve all been seeing the eye candy on every social media platform these last 48 hours! So it would be pretty moot to go over this, instead I want to look at it from a purely event stand point: looking at activities, the Demon itself, and various stands put on in order to answer: Was it worth it? 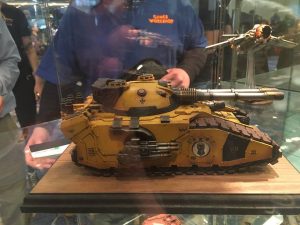 First of all: the main attraction of the second day is of course Golden Demon. Painters from far and wide compete to win a statuette within their category. I myself, have never entered but love looking at the row upon row of entries finding inspiration for my next project, seeing the work of artists I follow in the flesh, and most interestingly to me: seeing alternate takes and styles compared to the classic GW style we have all seen.

The Demon area dominated a large room at the event: and it must be said I was impressed. Not only by the level of entries; but by the preparation that had gone into the event. You can see all the entries here at Volomir.com (Ed.)

Previous events have seen beautiful paint work suffer due to poor lighting or cramped display cases. I felt this wasn’t the case this year. Aided by the new venue being both spacious and light (unlike the last Games Day I attended where miniatures were shown in the basement of the NIA) the display cabinets were arranged by category with good lighting being generated by the cabinets themselves.

For the first time at a Demon I felt I could adequately view the entries in a way they deserved to be: judges of course pull miniatures out to look at under day light bulbs and undisturbed. As attendees we do not have this option: so I was very pleased that I did not have to squint through shadowy display cabinets to see my fellow hobbyist’s hard work; and I feel I actually want to take part next time! This better view, to me, makes the event more appealing to guys like myself: who may not win and therefore will not be viewed individually by the crowd: at least we can have a moment in the spotlight! 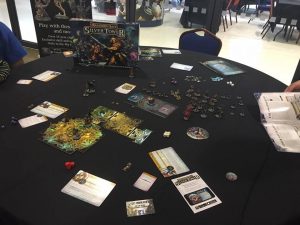 A criticism of the NIA Games Day for me, was the lack of Games present. Despite the renaming of the event to Warhammer Fest: Games Workshop have attempted to rectify the lack of games. I feel this event mirrored the opinion of many GW Fans in that the new CEO is placing an importance on the Games side of the business, where his predecessor did not believe games were an important part of their business model.

If I were to be really picky in this write up: it must be said I do miss the glory days of the event games where Games Workshop would put on large participation games with beautiful armies and display boards: this seemed to have died when the event moved from the Birmingham NEC.

I was pleased to see a return of the bitz box challenge from earlier Games Days but I felt it was poorly organised: parts were not replenished and there was no theme or competition like previous years. 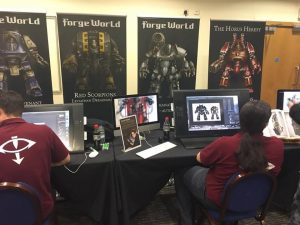 One of my favourite aspect of such events has always been the interaction between design studios and me, the consumer. Warhammerfest did not disappoint: the new specialist games department (complete with bloodbowl!) was present, alongside Forgeworld, Eavy Metal, the new Middle Earth Team, and White Dwarf were all present.

One could talk directly to staff members offering feed back and ideas, whilst hearing about technique, train of thought, and future projects. Combined with seminars spread throughout the day I fail to see how this event could have offered more in the way of customer interaction. 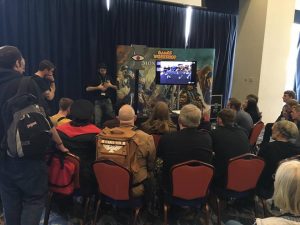 Demonstration pods were present throughout the day at regular intervals in order to show how the design and painting studios went about model production and painting. Questions could be asked throughout with answers not just being given but also being demonstrated.

However, it was quite difficult to hear the staff members demonstrating and I felt that the painting side of the event was limited towards beginners: I believe GW missed a trick and would have done well to demonstrate the new(ish) Citadel Air paint range in such demonstrations as personally I am still undecided as to whether to pick some up.

Warhammer TV was also present with demonstrations based upon what you asked to see, and as some one who produces youtube content I did enjoy speaking to Duncan. One thing I gathered from all my interactions with staff from the guys at the door, to the sales counters, to the stands and demonstrations: GW staff are very much passionate about what they do, and more than willing to share that enthusiasm with you. (Big thank you to Mark Bedford for snapping a picture of me and Alex with the bloodbowl trophy!) Previews were good, and I was left smiling at all the the good products to come. 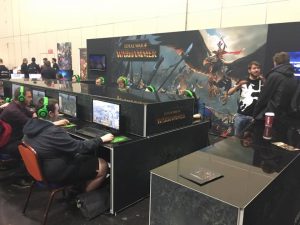 You will notice I have talked very little about the sales at the event. This is because I do not feel they were relevant. I will say that there was a good amount of stock, and pre releases. And queues were dealt with better than any other GW event I have ever been to. It was clear a good amount of thinking and extra staffing had gone into resolving this previous criticism. 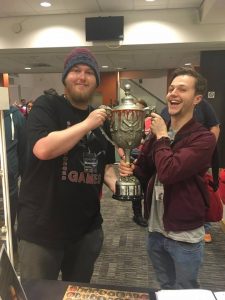 In conclusion: I really enjoyed Warhammer Fest and believe my ticket price of 20 GBP was a bargain. Unlike my last equivalent event at the NIA it did not feel like a pop up store. It felt like a well organised painting competition with a focus on community showcase; and it felt like an opportunity to learn from and interact with the largest company within this industry.

I will definitely be back (I even purchased a ticket for the Forgeworld Open Day at the event) and would like to thank all the members of the GW, FW and video game companies present for putting on an enjoyable event. I also highly rate the new venue!

Thanks for reading everyone, hope to see you there next year!!