This is the first full figure release from Life Miniatures, sculpted by Sang-on Lee, War Daddy is a clear tribute to Don “Wardaddy” Collier, a battle-hardened staff sergeant of the U.S. Army in the 2nd Armoured Division and commander of the M4 Sherman “Easy Eight” tank named Fury, in the same titled 2014 movie.

The kit is 1/16 scale and comprises eight polyurethane resin parts and the kit arrived in a compact black box adorned with images of the finished sculpt but no boxart was available at the time of writing. First impressions when opening the box are very good but once I put on my trusty optivisor the depth and breadth of the detailing and quality of the sculpt and cast come to the fore. This is an exceptional kit, another piece of Art by the Master himself!

Leading a five-man, all-veteran tank crew which include gunner Boyd “Bible” Swan, loader Grady “Coon-Ass” Travis and driver Trini “Gordo” Garcia in the Allies final push into Nazi Germany, the tank’s original driver/gunner, “Red”, is killed in action and so the inexperienced Pte Norman Ellison (a raw recruit and merely a clerk) is assigned “Red’s” replacement.

Norman’s inexperience becomes dangerous and drives a wedge between himself and the cold, focused and determined to survive crew mates, first instance of this is when he fails to shoot several Hitler Youth soldiers — who kill the crew of commanding officers tank with Panzerfaust (tank fist –  a recoilless, single shot, anti tank weapon) during an ambush! War Daddy is angered at his further incompetence, during a tank battle and after hostilities and orders Norman to execute a captive German soldier. Norman refuses and War Daddy forces a pistol into his hand and forces him to pull the trigger, killing the prisoner, traumatising Norman in the process. There are several incidents durin the film that continue along the lines of Norman having an almost anti War stance, Norman is clearly trying to retain a sense of humanity, whilst those around him know better, it is a battle of wills in many ways.

Following another Tank battle we get to see the brilliance of War Daddy and you begin to realise he is determined to keep his men safe and alive, which in hind sight could be why he seemed to “bully” Norman in the early exchanges. Ultimately the movie comes down to a final, desperate stand against incredible odds to hold a vital crossroads. Their task is made so much more difficult when the Sherman is immobilised by a landmine and thus we see an epic battle. If you have not seen the movie yet I do not want to ruin it for you so I will not go any further!

Let’s begin with the head, the likeness is unbelievable and is instantly recognisable, unlike the statue of Cristiano Ronaldo! Not only are the details correctly represented, the jawline, the swept back hair, the scarring etc but the actual expression is perfect, you look at this sculpt and you see Brad Pitt! Uncanny! The cut to the neckline is great and once the casting plug is removed the fit to the open collared neckline is perfect, no need for any gap filling. 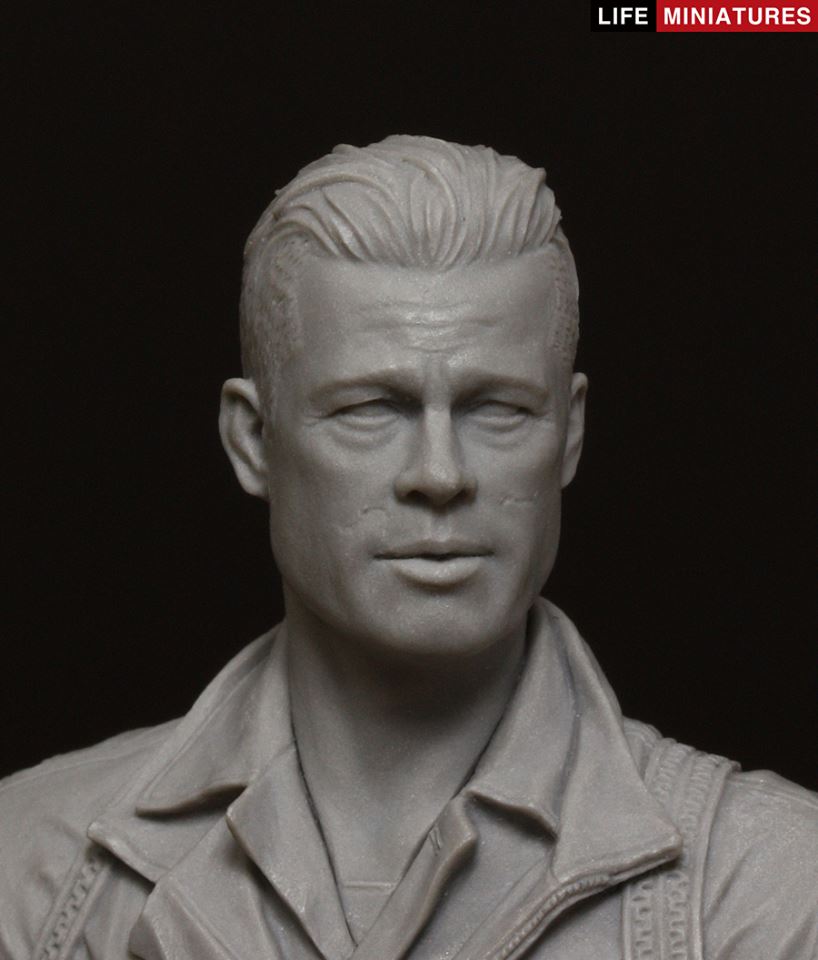 the uncanny resemblance is testimony to Sang-Eon Lees sculpting skills!

The next piece consists of torso and upper legs, everything is done as far as I can tell, to the nth degree of historical accuracy, being as it is a carbon copy of the rugged character from the movie. The attention to detail is incredible and only matched by the flawless cast. Taking a close look to the torso you see the individual teeth of the zipper, the actual zip piece has a loop to make it easier to use when wearing gloves, seams to the jacket and patterned stitching to the shoulder holster are all present.

The waistband and cuffs to the sleeves of War Daddy are ribbed and elasticated, the oversized square pockets are accurately represented with sharp undercuts throughout. The creases and folds are stunning and a great detail is how the size and depth of folds in the trousers are different to those of the jacket. The left and right arms attach by square peg and hole assembly with a snug fit, no gap filling required. Both hands sit on the waist, the left open whilst the right is slightly clenched, clever sculpting and cutting means the thumbs sit snugly on the hip, settled in amongst the impressions sculpted there. 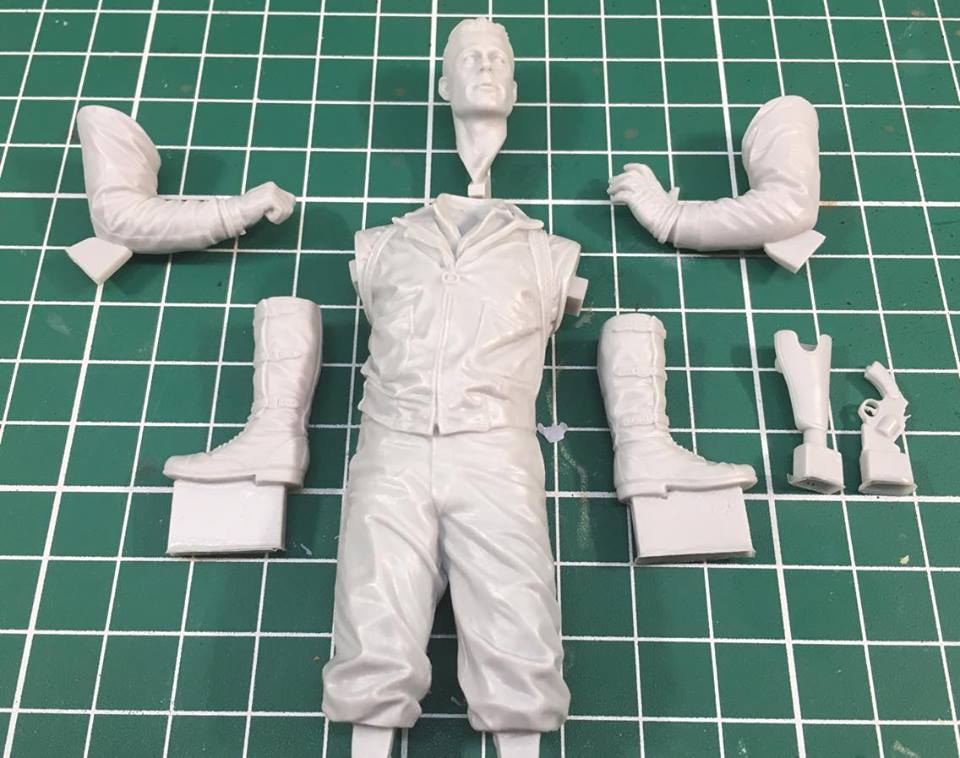 Next we have the boots, cavalry style and high fitting, the sections of the boots are clearly presented, with clear heel and toe protection, the lacing along with holes and eyelets are finely detailed, the casting is crisp. So often details such as soles of boots are an after thought yet with Sang-Eon every little aspect is sculpted with the same care, time and attention, hence why the overall effect of his sculpts, regardless of subject matter, is perfect. Make no mistake as a sculptor, painter or all round Artist he is at the apex of the game. Finally we have the shoulder holster which is open sculpted to receive the commanders’ pistol, which itself displays delicate detailing to the trigger, guard and cocking mechanism. 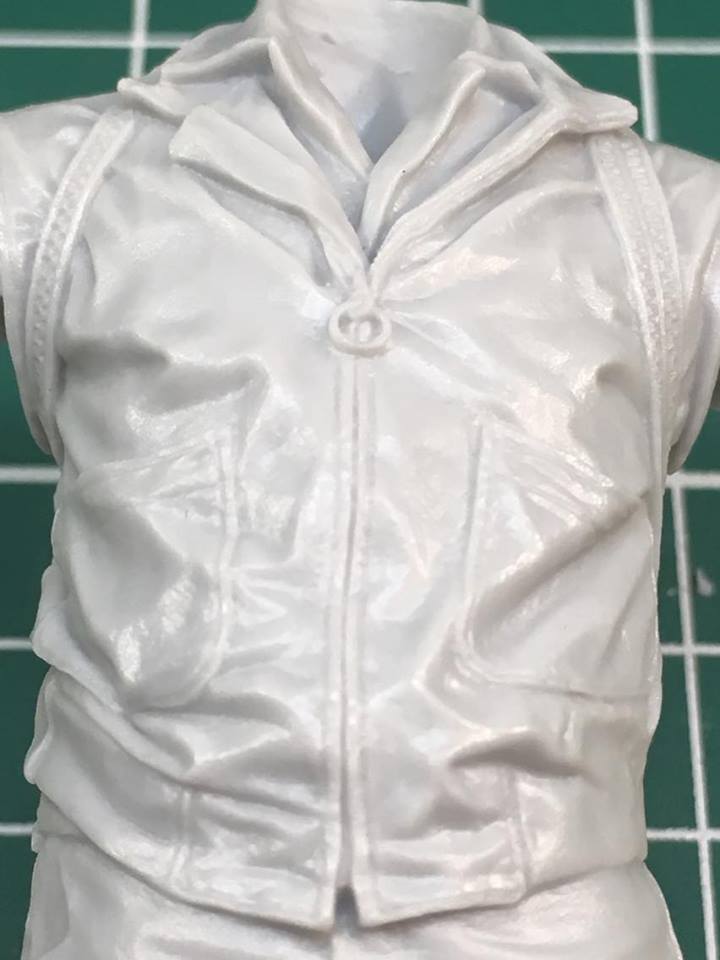 The casting for War Daddy was done in house too and is simply flawless, the casting plugs need removing and the parts need a soapy bath and you are good for assembly and priming!

The design of War Daddy is static yet at the same time perfectly captures the unwavering confidence and bravery under impossible conditions and odds. This piece would look stunning next to a section of Sherman (wedge style) or as a stand alone figure. There is a wealth of textures and details and the folds to the materials will create some stunning contrast between light and shade. I really like the fact that this can be painted to mirror so accurately an incredible character from a compelling movie, which will also make finding reference for the uniform so much easier too!

Life Miniatures are the pinnacle for what is achievable both in sculpt and cast and as such have a large following who lap up the next new release from Sang-Eon Lee. I am blown away by the accuracy and detailing each and every time and I can not wait to finally see the official boxart for this piece. My only regret, is that I would have loved to have seen a wholly original and new sculpt from Life for their first full figure release.

It is my belief that $60 for this is a steal! I guess the desirability and popularity of the Fantasy genre influences the prices of those figures, that they receive a premium price, yet I see nothing there that can hold up to the quality of Life Miniature releases and all of this for $60 seems incredible!