This is a new bust in 1/10 scale from NutsPlanet titled “Succubus”, sculpted by Jun-Sik Ahn. It arrived in the customary, blue, sturdy box adorned with the box art by Myeong-Ha Hwang. It comprises of seven polyurethane resin parts, sealed in ziplock bags and nestled within layers of shape foam for extra protection during transit or storage. In truth I was pleasantly surprised by the beauty of the piece, first impressions are very good indeed!

“A succubus is a Lilin-demon in female form, or supernatural entity in folklore, that appears in dreams and takes the form of a woman in order to seduce men, usually through sexual activity. The male counterpart is the incubus”.

Let us begin by stating the obvious, Jun-Sin is an incredibly talented sculptor and the cast is nigh on flawless. There are some support struts and resin blocks that need removing from most parts yet a close examination reveals no defects such as cold lines, air bubble holes or casting slippages. The quality here is very high indeed. 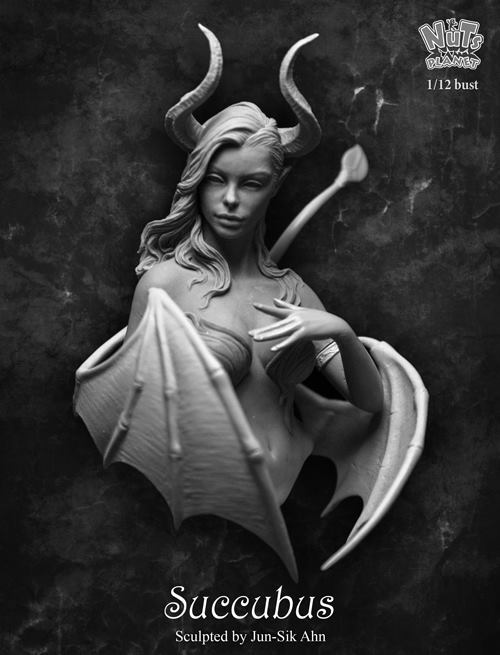 We have the torso, including the head and upper arms, as one piece. The hair is swept back from the forehead and flows down the shoulders and upper back, pushed behind the left ear, revealing its almost elven appearance. The facial features are particularly delicate with fine details to the eyes, nose and the mouth displaying full, sensual lips.Either side of the head we find holes to receive the textured, slightly spiral in shape, horns. These fit perfectly.

Adorning her upper torso we have a tight fitting under garment that whilst revealing is also rather tasteful and not overly gratuitous for the hell of it. The anatomy is slender yet muscular telling of an inhuman strength. We also have a serpentine tail, twisting and curling, that attaches via a peg and hole assembly, which loops up over the left shoulder. However, it is the next series of parts that really brings this bust to life and reveals her demonic and seductive nature.

The two demon wings are rather petit, showing the slender wing bones and covered in a nice texture along the membranes. Both wings attach nice and snug to the upper back and she holds them curled in towards her body, suggestive and demure, rather seductive if I say so myself. The left arm attaches cleverly at the bicep, the join hidden by a torc. The fingers are expertly sculpted and their pose and position further enhances the feeling of seduction.

This is a very clever take on the archetypal demon type sculpts, by adding the sensual allure to the sculpt it transforms the subject matter to something else entirely. The design is very carefully considered and the sculpt is balanced, offering a very attractive silhouette. I can’t off the top of my head recall a similar bust, showing the same level of detail and expression. Highly recommended!

I can not remember ever seeing a bad sculpt from Nuts Planet, they are without doubt one of the leading manufacturers, especially within the fantasy/sci-fi genres. Their large fanbase I am sure will enjoy this bust and indeed anyone who is looking at trying to develop their skills could do far worse than investing in this bust. It offers the chance of trying a female skin tone and textures, whilst allowing the painter some freedom to interpret in his/her own way.

At $50, ten more than for the Barbarian bust, is in my opinion a great price point, considering the quality of presentation, sculpt and cast. It offers great value for those who are already seasoned bust painters or indeed for those who want to make the transition from painting figures to larger subjects.