In many ways SKOH continues in the same vein as other anthropomorphic creations such as Rhinotaur (2011) which appeared in Spectrum Vol19, Haane, Kahaar and Minotaur all the way back in 2009. I am always excited when there is  new Figone release involving the sculpting of Carrasco even if , as always the presentation and packaging need in my opinion, improving! SKOH arrived sealed in a zip lock bag inside a bubblewrap envelope, thankfully there was no damage to the parts, one of the things us painters like are the little details, a nice box, a bow or wax seal, boxart or a limited edition authenticity card. This is a twelve part, polyurethane resin kit in 75mm scale, the sculpt is lovely and the casting is of a high standard too!

“Without any scruples, they take possession of our lands, tear down our hundred year old trees, bulldoze our savannah, grow hundreds of acres of palm…. our people suffer this form of extermination under the greatest indifference worldwide, our children are catching new incurable diseases, we cant find anything to eat anymore and our water is polluted…..

I am called SKOH and in my veins flows the blood of anger and the thirst for justice!”.

The main piece consists of torso and both legs and the only criticism I have is that the legs are really statuesque and blocky. Obviously they are beautifully sculpted, with thick, wrinkled skin just like the real thing but I would have liked to have seen some movement in the hips. I am currently working on this piece myself and the stance helped me a lot with my narrative, SKOH is standing guard at some medieval gates, I will be continuing with the build soon. 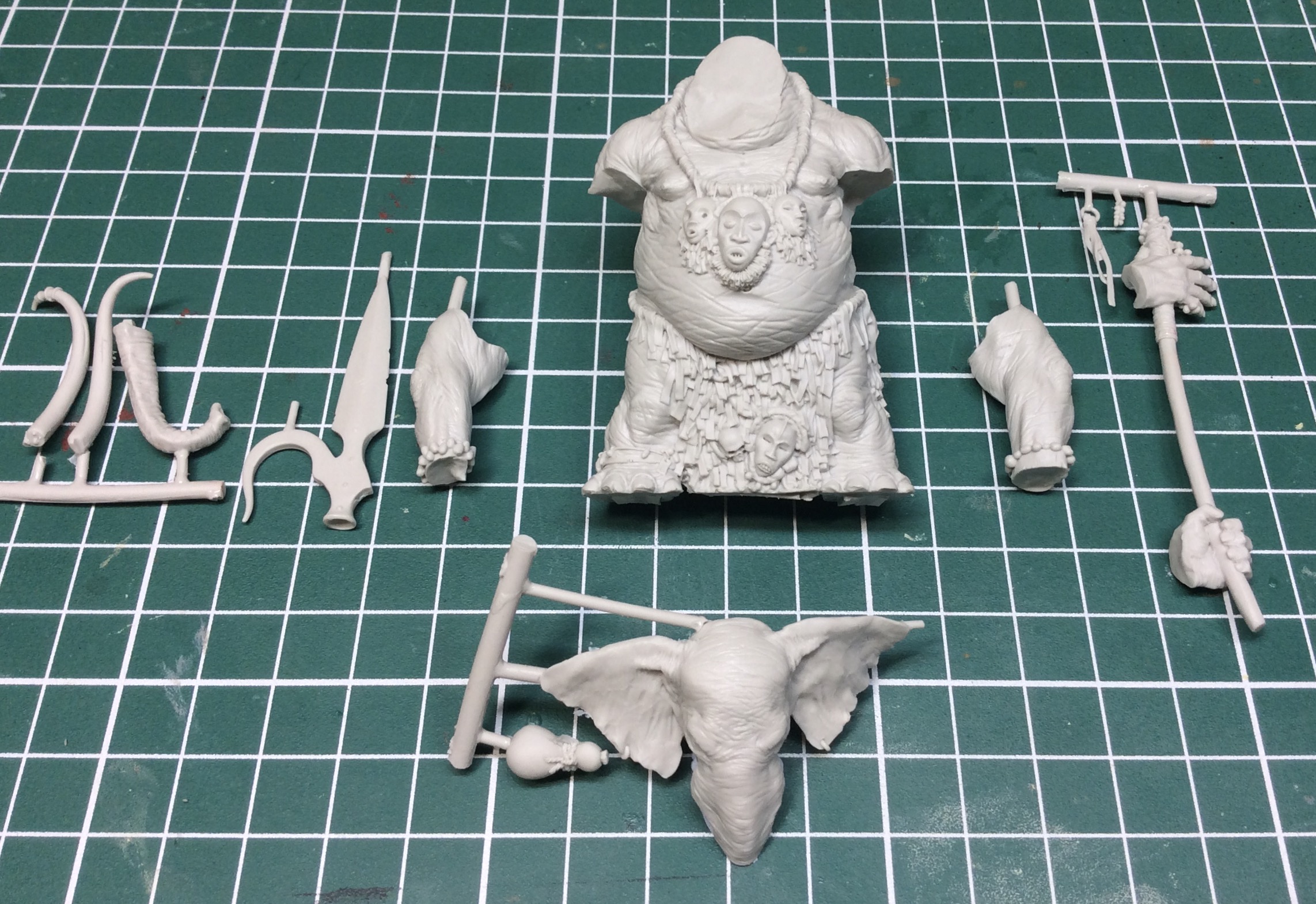 There is a real sense of the organic in Allan’s sculpts, a definite benefit of the traditional methods of sculpting, there is a wealth of textures, detailing etc and the anatomy is very well done, as always there is a rather graphic detail between the legs. The body is covered in the thick and deep wrinkles seen in creatures such as elephants with calloused areas at the knees and knuckles. The feet are definitely elephant like in design whilst the hands are much more human looking, the droop of the bulky stomach is another clever way of joining the two species in an anthropomorphic manner and it also helps to convey the size of the elephant in a more human form. The veins of the arms and hands is nicely rendered too as is the texture to the trunk. The tusks have a nice movement to their shape and the face in general looks emotional and intelligent.

There are a lot of visual clues to SKOH’s origins with the reed skirt and African tribal masks and the spear/halberd has a nice design to the blade which ties in nicely with the design and lines of the figure. The fit of the arms is good and the musculature sits nicely into the empty spaces of the side of the figure for a tight fit. I did however, add some thinned putty to the joins just to make sure everything is perfect. The hands attach via a clever cut that follows the contour of the wrist and so there is only one way of correctly assembling them. 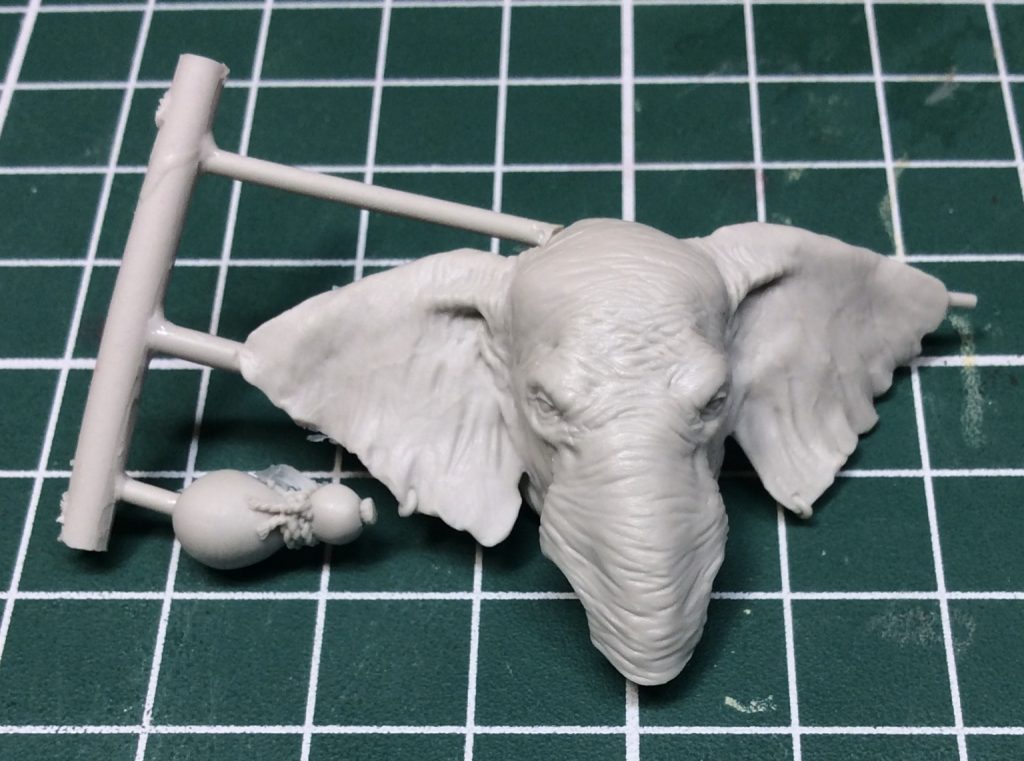 On the bottom of the right leg we have what is left of a manacle/fetter indicating a time in his life where he was held captive. This is a nice way of creating a narrative about SKOH as detailed in the snippet above. There is a clay, water gourd too which attaches, via a small peg so it is seen to hang from the waist rope that forms the reed skirt. The casting is good although there are mold lines that need removing, the left ear of my copy was a little on the thin side and did snap when I was cutting my figure up, but a spot of super glue and all was fine. There are no major defects such as air bubble holes or casting slippages, the detailing is crisply recreated and the undercuts are sharp throughout. 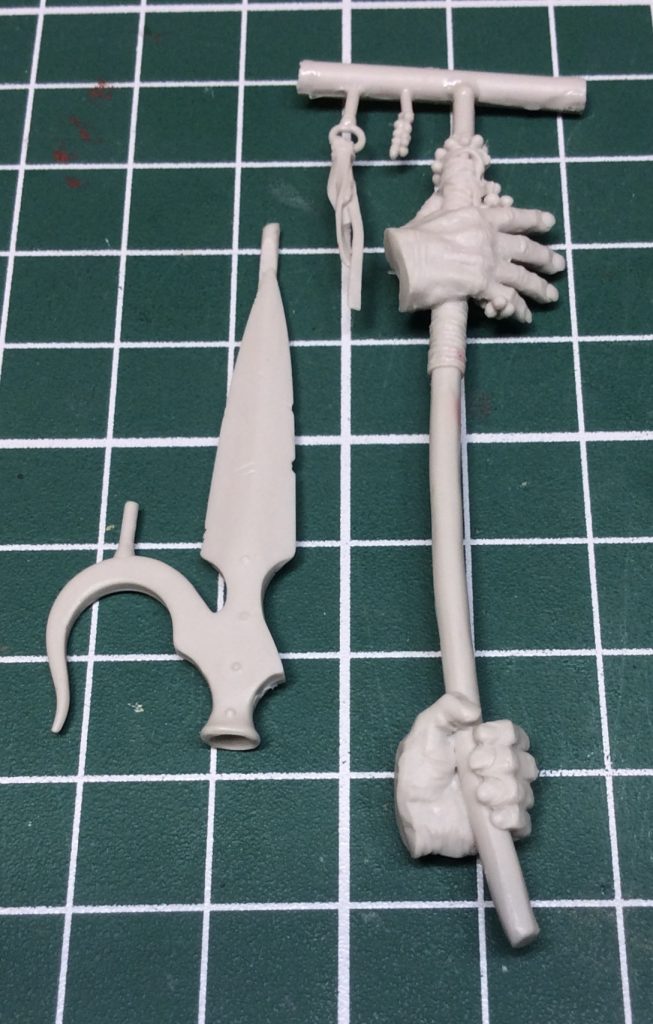 the weapon, as you can see needed considerable cutting for me to use as a single handed weapon

I really love the creatures from Allan Carrasco and the moment I saw this one I had an idea for how I wanted to approach the project, that in itself speaks volumes for this particular release. There is so much scope to create an original piece and at a time where the fantasy market is awash in new releases (not all original), another Figone/Carrasco combination is always met with some excitement.

SKOH is stocky and powerful looking with an instantly recognisable silhouette, although I really like this figure in my opinion the design lacks a vertical element which makes the piece look squashed. For my project, I have done minor adjustments so that SKOH will be holding the spear vertically in his left hand. This decision was made primarily because it helps to balance the figure with my intended scene and base.  The visual clues and steadfast pose of SKOH really brings the Figone narrative to the fore which really helps to picture the setting etc for this figure. For me this is another release in the line of original concepts from Allan and Jeremie and I love it!

Every Carrasco sculpt is received with much aplomb and Figone remain and continue to push the boundaries within the fantasy genre, with that in mind I believe SKOH is another to add to the list of cool Carrasco creations that many of us will want to paint. There is a lot to appreciate in this sculpt and the character is very persuasive.

I think €35 offers great value for money as a figure to paint, I always wish Figone would make more effort with the presentation and shipping, yet that’s is one of the reasons why the prices are kept competitive. I highly recommend this figure for ll those fantasy painters that want to try a Carrasco sculpt.