Greetings from the team behind Figurementors! To help you get to know us a little better, we thought that each month we’d share with you what we’re working on. So, without further ado, here’s a quick look at some of our current projects. 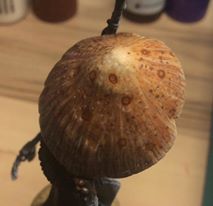 mushroom shaman from Mindwork Games. My idea was to create something alien but natural, working on the lights and shadows to really push the figure to the foreground and have the dark woods receding as he emerges into the light.

I had a lot of fun creating the textures for the various mushrooms and his hat. I started this as a break from a bust I’m working on but had so much fun creating the base I now want to get this piece finished in time for Euromilitaire in Folkestone this month. 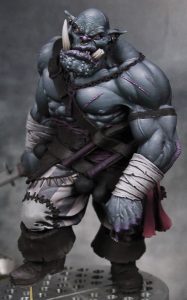 I’ve been working on Redghar from Big Child Creatives. I’ve got a number of the figures from their Black Sailors line, but this is the first one I’ve actually started to paint.

Really phenomenal sculpt and so much fun to work on. To make this different from other versions I’ve seen, I decided to paint him as a black orc.

The skin was done with a mix of dark green and purple then highlighted with a light grey. Purple accents were used on the face, elbows, and knuckles to break up all that green. I used some greys and off whites in the red to give that a muted look to go along with the skin.

Up next I’ll be working on the leather.  I’d be lying if I said that didn’t make 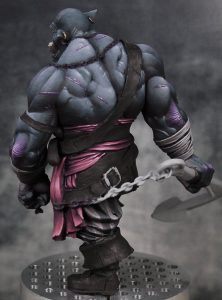 me nervous.  Getting a good texture will be key, so I’m looking through a lot of reference images.  Hopefully I won’t screw it up!

Because (shamefully) I’ve not started anything i’m happy with sharing this month, here’s what I’ve been working on over August. 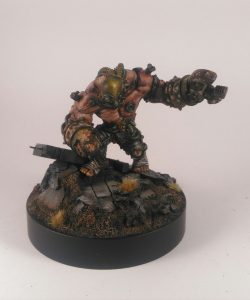 mercenary from Privateer Press. I’ve tried to perfect my slightly scruffy and textured variation on NMM on the helmet, along with using dots of gloss varnish on the specular highlights to make it grab a viewers attention from a couple of feet away.

Originally the same technique was to be used on the claws, but I decided not to over use the effect as it just wouldn’t suit the nature of the model. 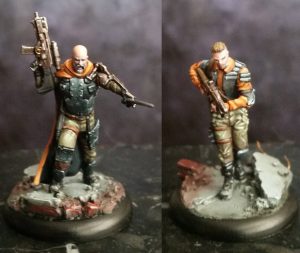 I have been working on a ‘secret’ project. A new miniature company from the Netherlands – Code Orange Games – is about to embark on a kickstarter for a new game and line of miniatures set in an post
apocalyptic near-future: Collission.

I was asked to paint up their ‘Reclaimers’ models for them. They wanted me to have them really dirty and represent the Mad Max-like wasted world idea.

However, I felt that I should rather paint everything very ‘clean’ i.e. without and added dirt painted or dusted on. On the one way the models themselves had enough details to show a rag tag bunch of people, worn by strife and such, but more importantly I felt that if I DID add lots of dirt, weathering powders, stains, etc, that it would fail as a tabletop model: all details would be lost in the bigger picture.

I really had fun with these boys, and I am just now eagerly awaiting the professional shots from Code Orange Games. 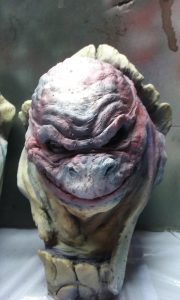 Here are a couple of early WIP shots of 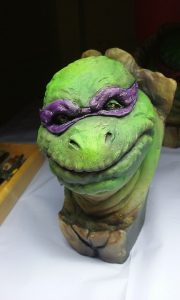 my ninja turtle busts sculpted by Cyril Roquelaine. In these first stages I used an airbrush to get all the pre-shading and shading done. I used a new technique for me that involved tightening up the pressure valve on the airbrush so it spattered some brown paint onto the miniatures. This shows through subsequent layers as blemishes and freckles on the skin. I really like how it looks on the miniatures and it’s something I would do again.

The shades are with reds, dark blues and dark greens. I have been adding progressively lighter shades of green to highlight the skin. Now I have done the airbrushing, and I have base coated the bandanas in their block colours the next step is brushwork, adding highlights and lots of glazes on the green to smooth any transitions. 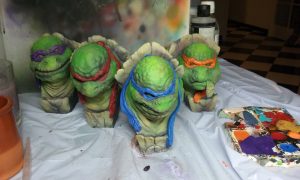