Despite the furore that followed Kimera Models when they released Dumah it has been this figure, Sarah Fortune, since Francesco Farabi showed me the concept by Vincenzo Lamolinara, that I have most wanted to get and paint. I love the pose, the details and the general composition of the piece. It is the first of the Aridam range of figures and is far more straightforward to build than the multi choice kits of the Pulvis range. 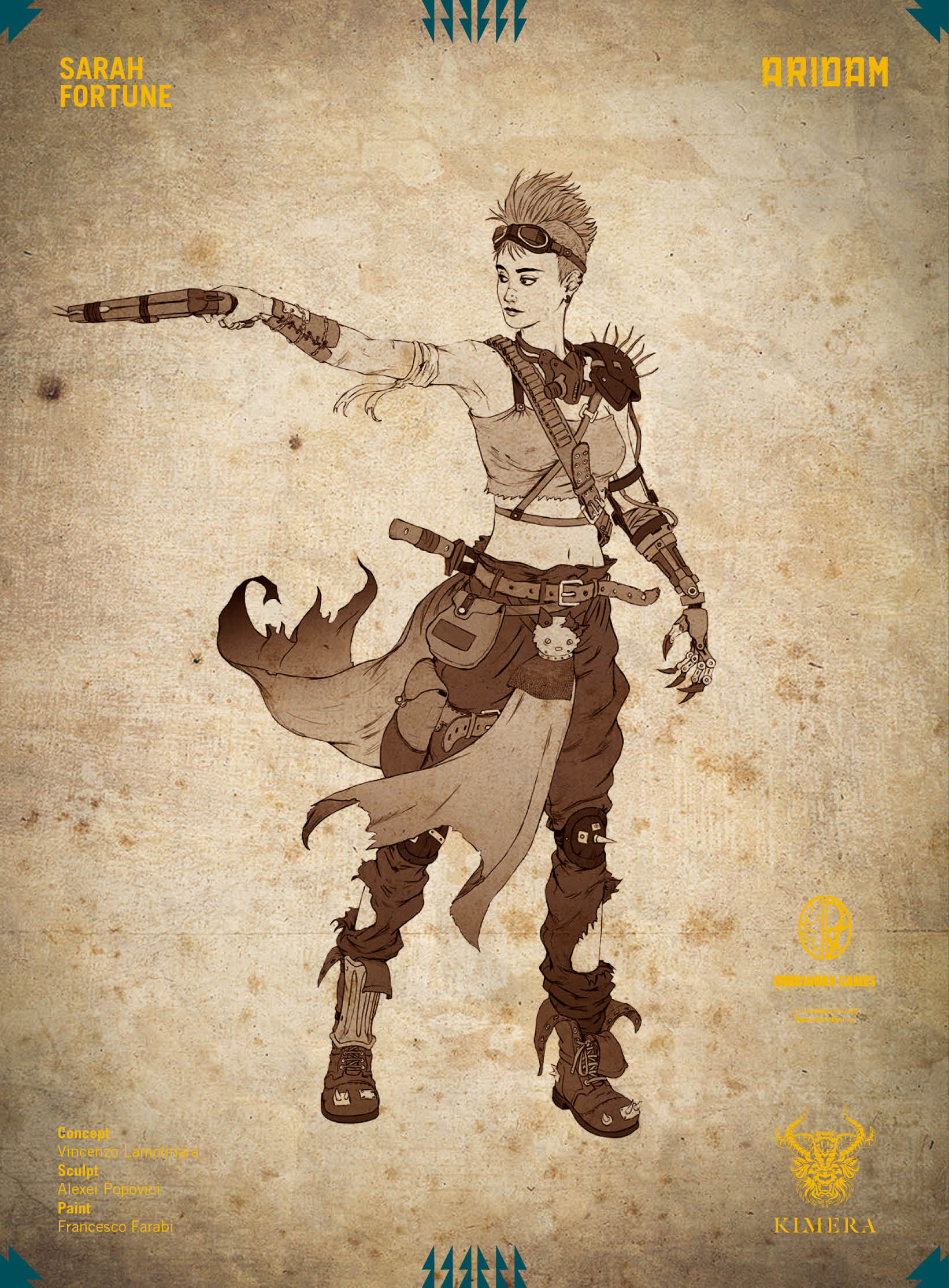 Sarah Fortune arrived in Kimera’s obligatory packaging, no expense spared, this is a premium product, wonderful box with pull out info sheet with concept Art and box Art represented. The box lid has the stunning logo and the reverse has a copy of the box Art by Francesco Farabi himself. The kit consists of 16 polyurethane resin parts safely nestled between layers of foam.

“Many centuries have now passed since the Cataclysm, the explosion of the star Eta Carinae, that swept the Earth in a blaze of fire and destruction. Yet from the ashes of a dead planet there is a burning hope.

Some survived, saved from the Cataclysm, those fortunate men and women, have inherited the Earth now. They continue to struggle, fighting for survival, killing for the meagre resources left, the little food, water and ammunition.

A land contested by factions fighting each other, some despotic and violent, oppressing others with an iron fist whilst others keep to themselves, hoping and fighting to survive, to find salvation. Because there is a voice that echoes throughout, telling of a ship in a bunker, ready to leave the dying planet….

and thus the battle for Aridam begins!” 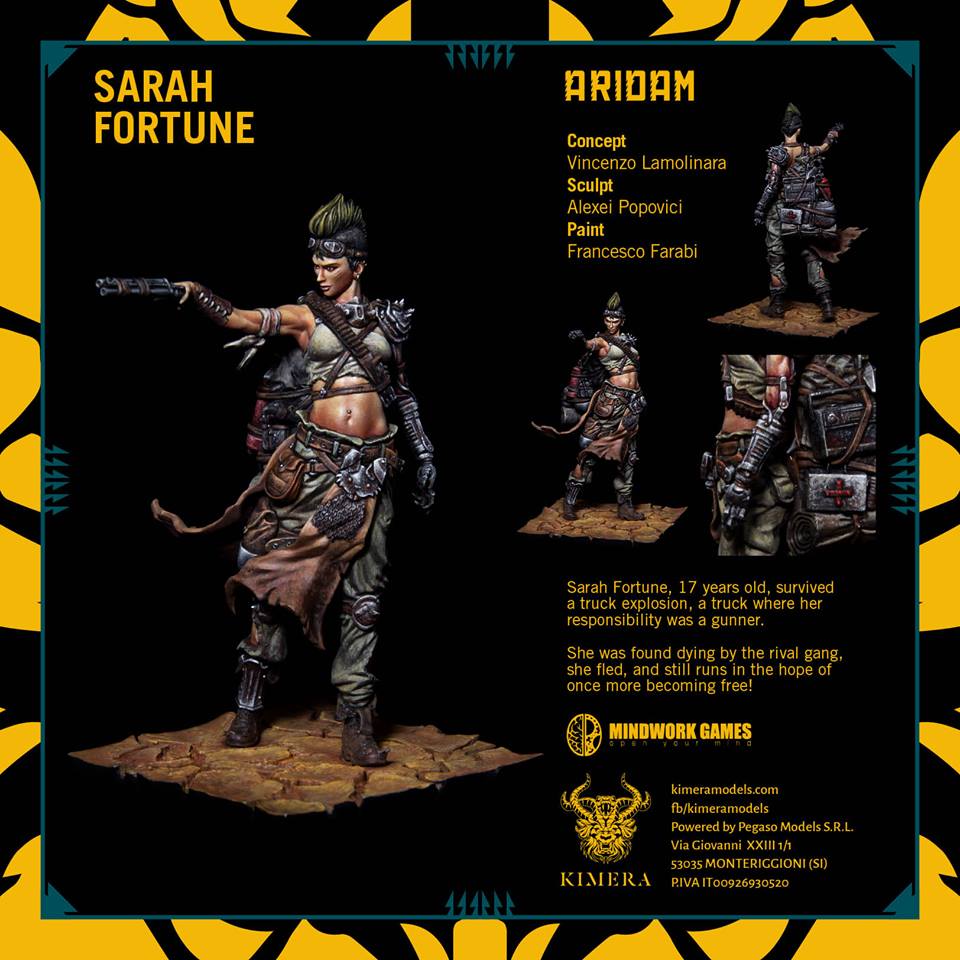 the full graphic from Kimera displaying various angles of the boxart

The sculpt by Alexei Popovici is simply delightful and the cleverly thought out cutting for the casting process makes assembling the kit very straightforward, with parts almost clicking together via peg and hole assemblies. When I built mine I was in two minds about adding certain parts but in the end opted to completely build her and just left the backpack separate for painting purposes.

There is a lot of detailing to this figure but it all seems necessary to build the story of a survivor, a character that is having to scavenge for any little “nuggets” of tech, personal equipment, first aid or weaponry, as such she is adorned with pouches and  belts and the backpack itself is a major project to paint, overflowing with her belongings. The addition of the cyber arm is a nice touch too and helps to hint at a futuristic world. Everything seems to carry out a function and has a purpose which really does help to tell her story, from the lightweight, makeshift armour, to the crop top and through to the goggles to protect her eyes from the swirling dust storms.

The detailing is crisp and the bandolier, straps and belts all display sharp undercuts and attention to detail is apparent throughout the entire piece. The loincloth type of garment is bedraggled and as it blows in the wind it offers a great silhouette but again helps to tell the narrative on this dusty, post apocalyptic world. There are pouches to attach to the legs so take care deciding which parts to attach and in which order so as to make thing as easy and accessible as possible.

There are two head versions for the figure, the Mohawk and goggles or the spiked helm depending on your preference for painting faces or not. There is a chemical rebreather that attaches under her jawline around her throat, which I had for some reason all manner of issues to attach smoothly and snugly but I got there eventually with a little perseverance. The positioning of the weapon arm is really cool looking to with the arm slightly twisted, “OG” style and the weapon itself is nicely detailed and again fits with the “salvaged” look of the figure. The concept has clearly taken influences from the classic Mad Max movies and the craziness of Tank Girl,another quirky touch that adds a little humour is the bunny icon at the top front of the tabard between the legs.

The backpack is crammed full of details and attaches to the back with the bedroll at the bottom and a clasp that fits a slot in her right shoulder. The pack fits the contours of her back nicely and shows all manner of oddities including an old Analogue radio, first aid kit, cooking pot and digging tools. The final piece is the square base which depicts, the scorched and cracked, infertile soil of her realm. 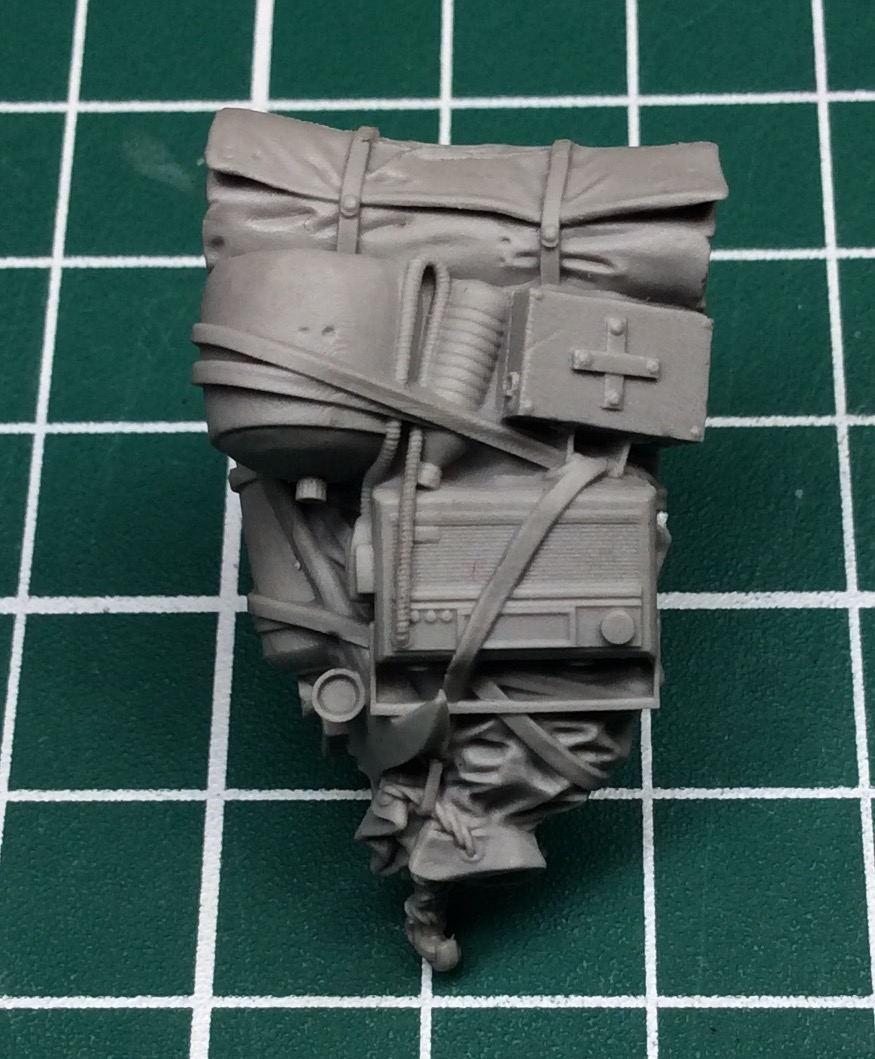 the back pack (although shown here upside down)

I really like the design and composition of this figure, the silhouette is quite dynamic despite it being a static pose, due in the main due to the raised weapon arm, the flow of the robes and the turn of the head. It is well thought out and perfectly sculpted, crisp in detail and full of charisma. The figure stands about 78mm in height and consists of 16 parts, assembly is easy if planned out with due care and attention, the anatomy is perfect with delicate facial features.

Each figure from Kimera Models is warmly received by the figure painting community and for good reason too, each release is of the highest quality, from concept to sculpt, cast and through to presentation. This new range of figures will appeal on so many levels especially to those with an interest Science Fiction ranging from Dune to Mad Max and Tank Girl through to The Expanse.

At €50 this is the upper end of what I can afford yet it is still exactly the type of kit I would purchase again. This really appeals to me and anyone with similar taste or interest in this type of figure will find it hard not to make the purchase. Highly recommended by figurementors.com!