ROMMEL is another in a smaller scale line of historical busts released that are aimed with the inclusion of a “how to” PDF to help those wanting to make the transition into painting larger scales and busts. It consists of just four parts, torso, head, cap and goggles, so the focus is on getting the piece to the painting stage as quickly as possible.

The kit arrived in its small, sturdy, black box, the parts nestled between shaped layers of foam with the clear acrylic goggles attached to a small sprue. The presentation as always is excellent, the lid adorned with the box art by Sang Eon Lee and the sides displaying various steps of the painting process and first impressions regarding the sculpt and cast are second to none.

Erwin Rommel (15 November 1891 – 14 October 1944) was a German general and theoretical tactician, known as the Desert Fox, he served as field marshal in the Wehrmacht of Nazi Germany during World War II. He was a highly decorated officer in World War I and was awarded the Pour le Mérite for his actions on the Italian Front. In 1937 he published his classic book on military tactics, INFANTRY ATTACKS, drawing on his experiences from World War I. He further distinguished himself during World War II,  as the commander of the 7th Panzer Division during the invasion of France.

His leadership of German and Italian forces in the North African Campaign established his reputation as one of the most able tank commanders of the war, and earned him the nickname der Wüstenfuchs, “the Desert Fox”. Among his British adversaries he earned a strong reputation for chivalry, and the North African campaign has often been called a “war without hate”. He later commanded the German forces opposing the Allied cross-channel invasion of Normandy in June 1944. 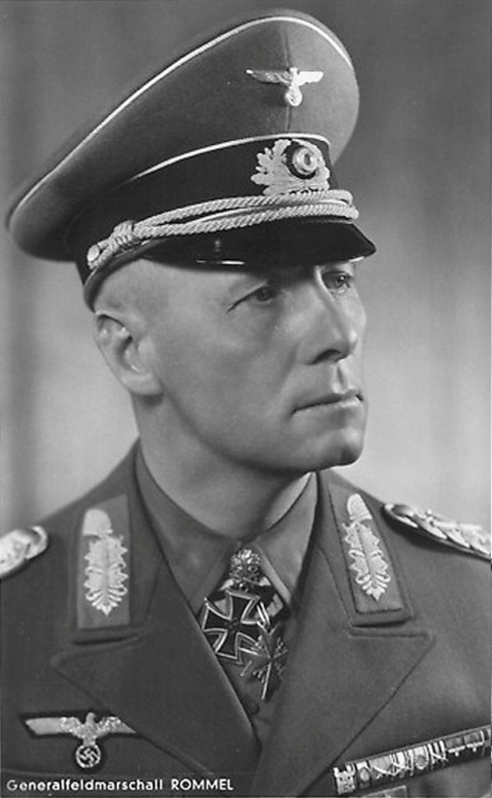 Rommel supported the Nazi seizure of power and Adolf Hitler, although his reluctant stance towards antisemitism, Nazi ideology and his awareness of the extent of The Holocaust remain a matter of debate among scholars. In 1944, Rommel was implicated in the 20 July plot to assassinate Hitler. Due to Rommel’s status as a national hero, Hitler decided to have him quietly removed and not immediately executed, as many other plotters were. Rommel was given a choice between committing suicide, in return for assurances that his reputation would remain intact and that his family would not be persecuted following his death, or facing a trial that would result in his disgrace and execution; he chose the former and committed suicide using a cyanide pill. Rommel was given a state funeral, and it was announced that he had succumbed to his injuries from the strafing of his staff car in Normandy.

Rommel has become a larger-than-life figure in both Allied and Nazi propaganda, and in postwar popular culture, with numerous authors considering him an apolitical, brilliant commander and a victim of the Third Reich although this assessment is contested by other authors as the Rommel myth. Rommel’s reputation for conducting a clean war was used in the interest of the West German rearmament and reconciliation between the former enemies – the United Kingdom and the United States on one side and the new Federal Republic of Germany on the other. Several of Rommel’s former subordinates, notably his chief of staff Hans Speidel, played key roles in German rearmament and integration into NATO in the postwar era. The German Army’s largest military base, the Field Marshal Rommel Barracks, Augustdorf, is named in his honour. 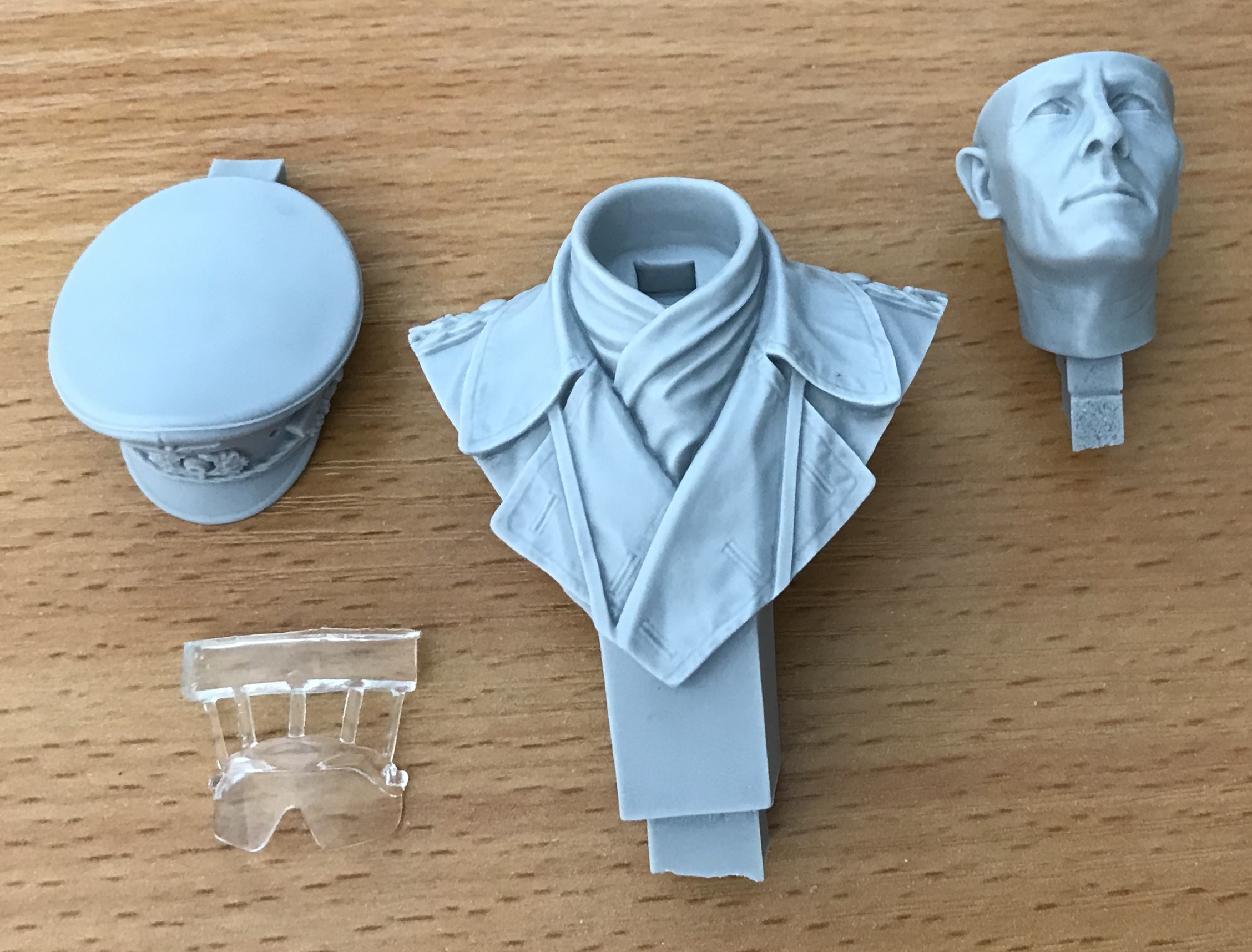 There is not too much to discuss here really, although the piece is relatively small and simple it does not lack in detail or accuracy. The fit of the head to cap and likewise to the torso is absolutely perfect, no need for gap filling. There are a few resin plugs that need removing and the one to the cap in particular will need careful sawing, scraping and filing so as not to effect the sculpt in any adverse way. 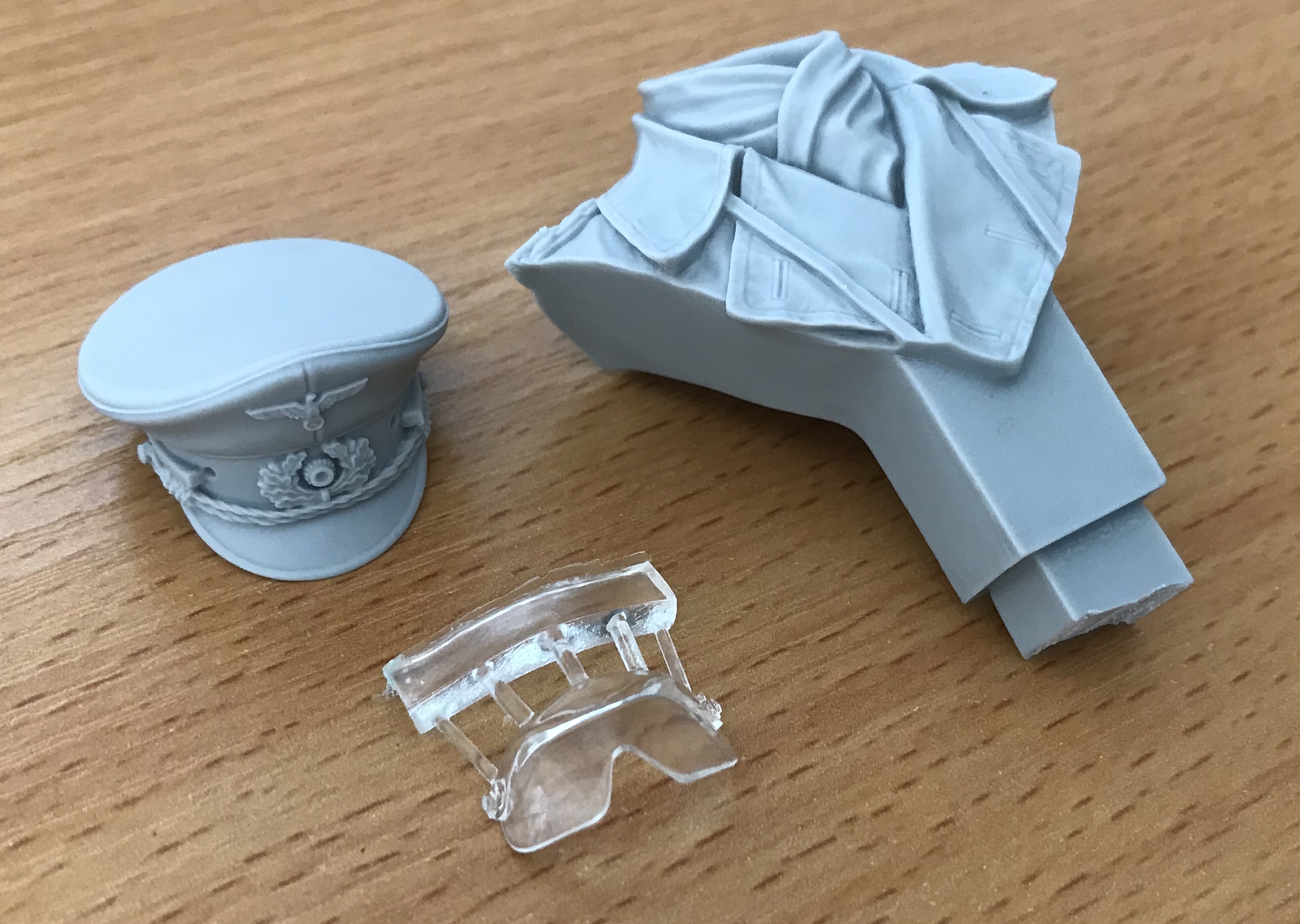 CLOSE UP OF THE IMPRESSIVE DETAILING

The resemblance of the facial features is exceptional, a great piece of work with delicate wrinkles to the neckline and some wonderfully subtle underlying muscle volumes to the cheeks and jowls. The various facial features are expertly rendered, the attention to detail especially around the eyes is particularly impressive.

The cap is accurately depicted, correct insignia etc in place with incredibly delicate detailing to the laurels and the cord, brass button attachments, left to right across the edge of the peak. There are two small holes adjacent to a pre-sculpted strap for the goggles. The goggles are a one piece affair however, note that the upper section needs to be painted as fabric and not left as clear acrylic. I’m a little anxious how I will remove the goggles from the clear sprue without damaging their leading edge but I guess I will need to be super careful. The cap boasts the quarter seams and trim and the folds and dimples in the fabric are realistically presented once more. 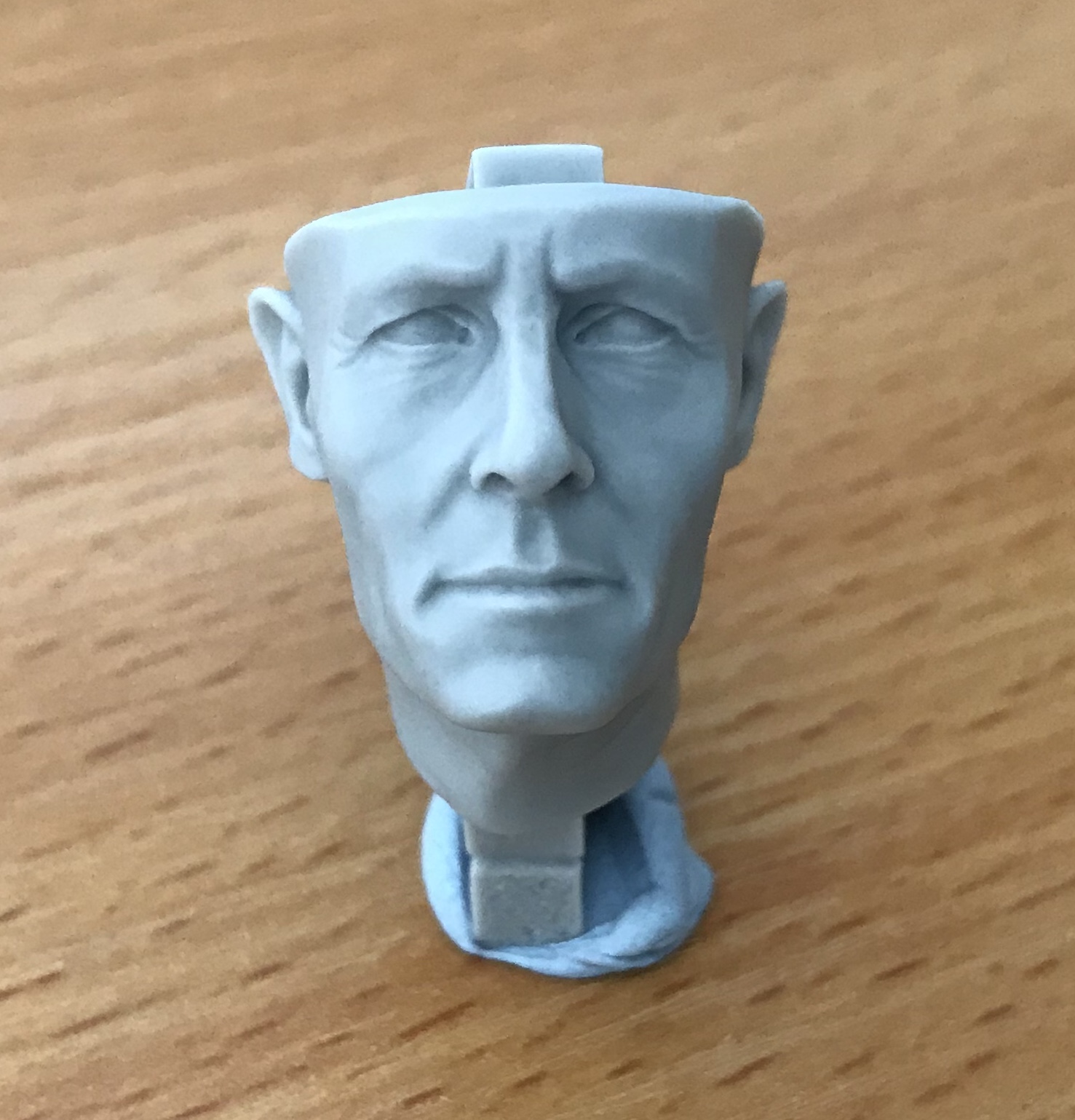 The leather jacket is again accurate and full of subtle detailing including seams, buttonholes, creases leather straps which i’m assuming are for his field binoculars. I’m not an expert in this field but I know Sang Eon Lee well enough to know his research prior to sculpting his subjects is particularly extensive and I would be very surprised if anyone was to pick him up on an erroneous detail.

These smaller scale busts are part of a series specifically designed to offer the painter a variety of curious subjects, easy to prepare and assemble, with great volumes and uncomplicated details, so they may focus on the painting process. Although the bust is of the classic head and shoulders, static in pose, it offers a enigmatic personality, for many a true leader and military tactician, a General for all intents and purposes that fought War as honourably as possible, well respected and admired by his peers and those of the Allied Forces.

This will definitely appeal to a select group of people who have an interest in the events of WWII, the German forces and their Armour. It should also appeal to those that wish to try their hands at an historical subject in a simple yet highly detailed 1/10 bust. ROMMEL is beautifully sculpted with faultless casting.

At $48 or a little over £30 I think this is represents good value for money, little preparation and a great painting experience, just what us figure painters are looking for!