I have been friends with Vittorio at TKS for some time now and I am an avid collector of their miniatures, I am lucky enough to have purchased the two previous Brom collaborations and when he told me of this particular project some many months ago I knew I just had to have it!

The kit arrived in a much larger box than is traditional with Terrible Kids Stuff releases, the box is the wrap around version with a white sleeve detailed with the TKS cutout, displaying the Brom artwork beneath. On the reverse of the artwork we are reminded that this is a collaborative project between some of the big hitters, Brom, MuMi, Pegaso Models and Terrible Kids Stuff and was a Limited Edition release of 100 casts!

Redwing consists of 19, white metal parts, the smaller pieces contained in a ziplock bag and nestled together between layers of foam, first impressions of the sculpt by Andrea Jula, now at Scale 75, are quite simply outstanding. 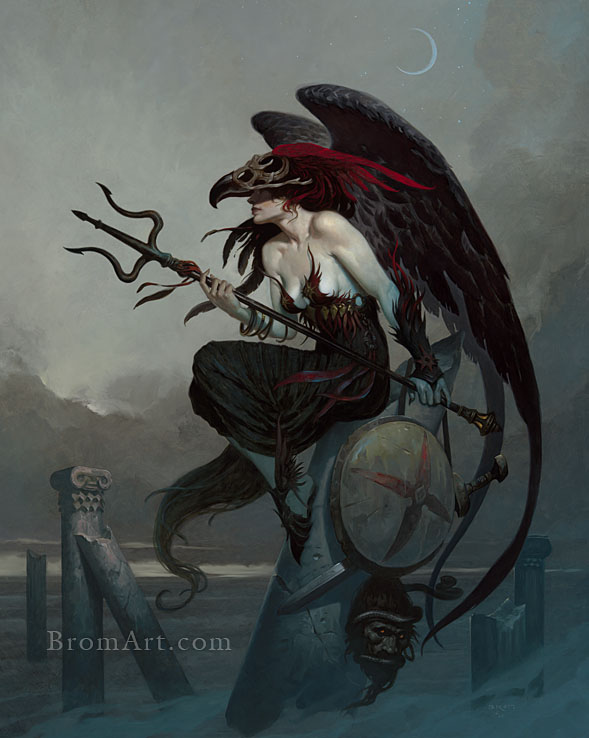 So what is all the fuss about this Brom guy? Who is he? Well he was born in the mid-sixties, son to a military father and spent a lot of his formative years on the move, living in such places as Japan, Hawaii and Germany. He has always had an affinity for creating the weird and wonderful and soon after leaving his teenage years behind him he began working full-time as a commercial illustrator in Atlanta, before entering the field of Fantasy Art which he had loved his whole life. He has added his distinctive style and vision to many genres of the Arts, from novels, games, comics and film. I have several of his books including the rather gothic noir “The Plucker” which he illustrated and wrote and his own dark retelling of the Peter Pan myth, “The Child Thief” both of which were the subjects for previous releases with TKS.

The casting is of a very high standard and I will approach this kit as I do other white metal projects, filing smooth the soft mold lines and then using wire wool to polish the surface super smooth, whilst also taking care not to deface any surface details. Then it is just a case of pinning, attaching filling any gaps (if needed) and finally washing the kit prior to priming, to remove any metal fibres from filing and any grease through handling. 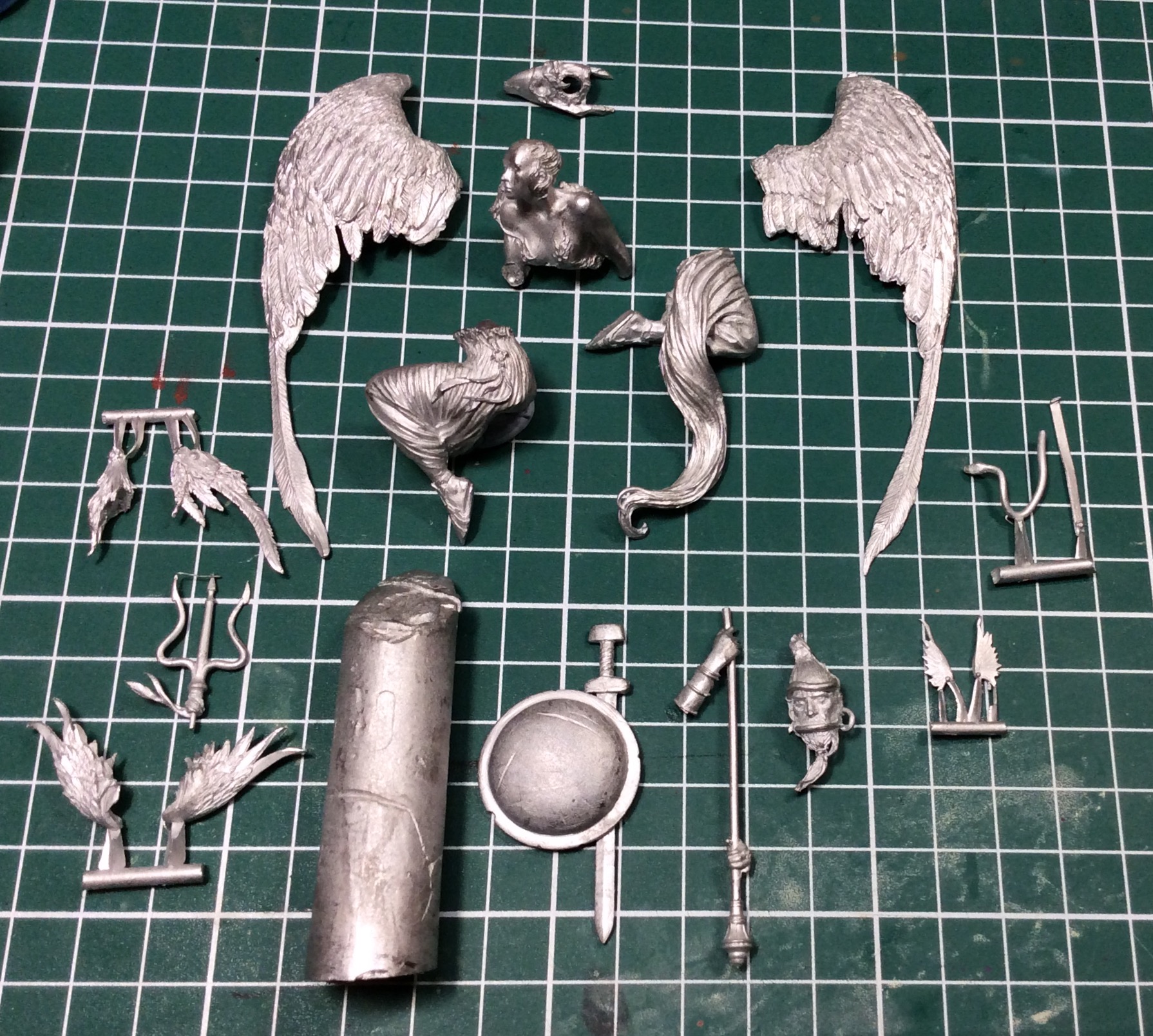 So looking at the kit it is quite clear there are two elements to the build, the anatomy followed by the decoration and accessories. The lower torso consists of two parts that when attached form the two legs from the waist down. The limbs are braced against the pillar she perches upon, soles of the feet flat against the cold stone, knees bent. The folds and creases to the “dress” flow with wonderful lines adding to the beauty of the piece and the volumes and anatomy speak of a physical balance between strength and fragility. Redwing is wearing what appear to be decorative, delicate shoes and to accentuate the image of the “crow” further we have two wing motifs to attach about the ankles. 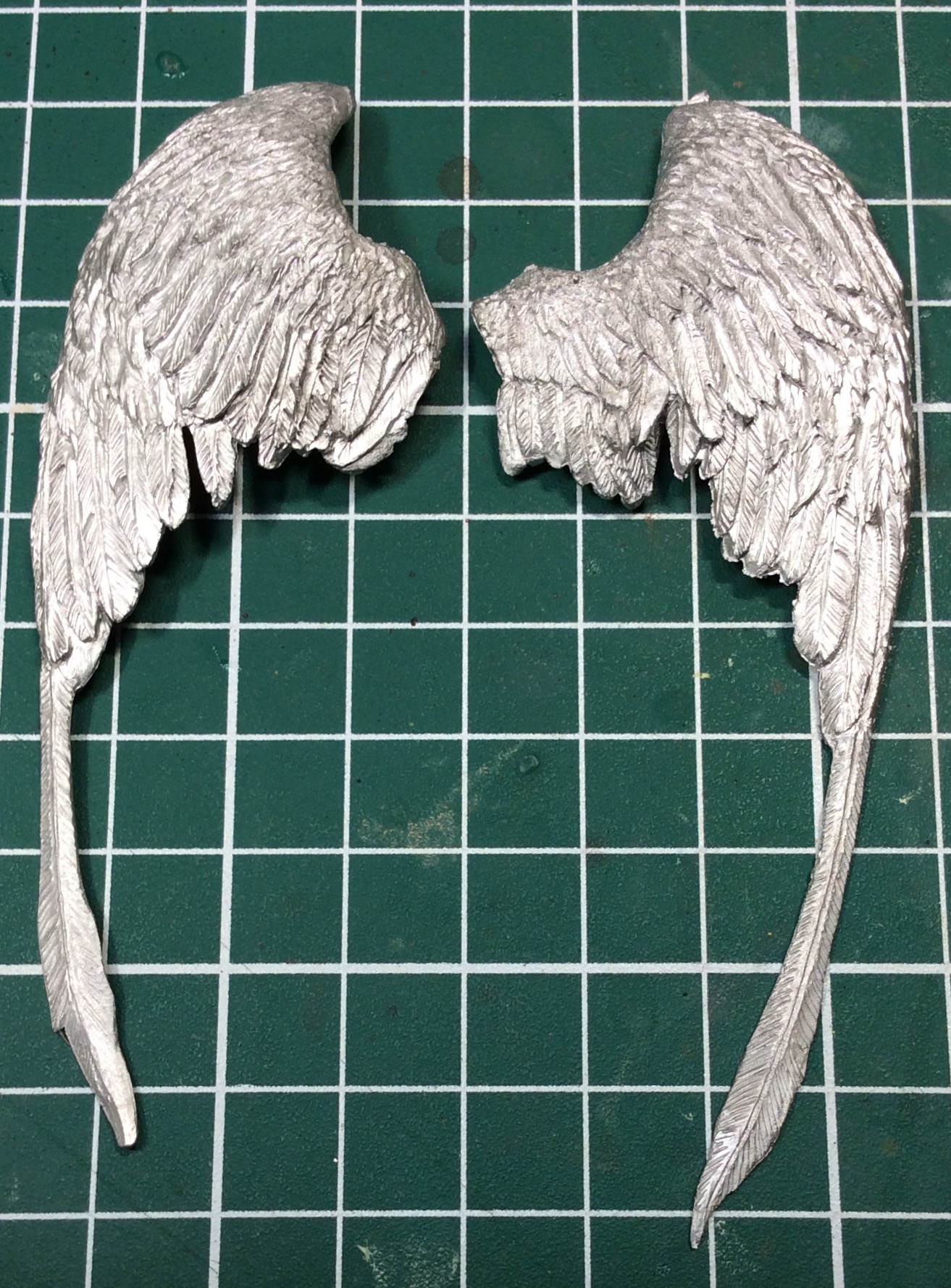 The upper torso attaches via shaped hole and pin and consists of upper body, head and upper sections of both arms. This part is predominantly nude but the fine and petite design of the dress makes the sculpt ……….. and not crass and sexualised. The facial features are exquisite and nicely detailed, even more impressive when you consider the size to be about half that of my baby finger nail. Yet it is the addition of the skull that really completes the head and complements the features. The skull itself looks anatomically correct and there are two attachment points near the eye sockets for the small wings that really aid the flow of the design and creates a unique silhouette. 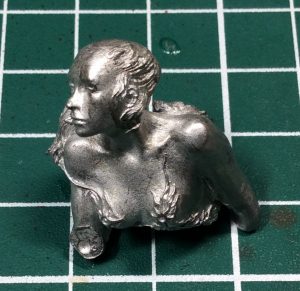 delicate features to her face and physique

Redwing has two beautiful wings that are partly folded and raised high over the shoulders and what I really like about these is the attention to the physiology. It regularly happens that I see wings included in a project where all the feathers are sculpted the same size and form, it is a simplified representation when in fact the wing of a bird has many different elements comprising several feather types which have various functions and aid flying in a variety of ways. You can quite clearly see the different feather types in Andrea’s sculpt and the addition of the long, decorative feather is another clever touch to accentuate and heighten the form and design of Redwing. 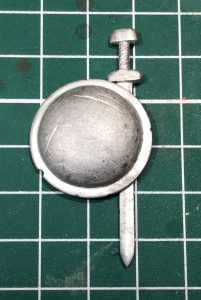 the single piece sword and shield

She is depicted carrying a slender and stylised trident, once more the appearance of “feathers” near the head help to harmonise and strengthen the design. The weapon comes in two halves and you will need to take care attaching them. I think the circumference of both is large enough to accurately and carefully drill out in preparation to pin the two sections. The hands and right arm are attached to the handle and line up accurately to the torso, the left arm and hand are connected via a third piece, the decorated forearm, so again careful attention to assembly will be required. I am always a little wary of this type of attachment for two handed weapons as on the one hand I do not wish to attach anything that may make painting awkward yet on the other, attaching anything after painting can possibly result in damaging the paintjob.

Finally we have the pillar sections. There is just the one vertical (ish) colum, there is a molded surface at the top that aligns with the molded surface of her rump and you can see the subtle outline of her feet on the front surface of her “perch”. So long as you line these up there should be no issues. The shield and sword are cast as a single piece with some nice details throughout, including minor damage to the shield, the hand strap and the multi folded face of the blade, although there is no boss to the shield. We also have a length of thin strap that when bent to shape and attached complete the illusion that the shield and sword are hanging from the pillar. To complete the kit we have the severed head! The quality of the cast is superb throughout!

As this perfectly follows the Artwork the design is that of Brom and not Andrea Jula, the sculptor, yet it is still stunning in it’s execution. There is a balance and poise to the piece that speaks of beauty, fragility, mystery and danger, the slenderness of the female form, the exotic touch of the wings and the bird mask (similar to a masquerade) add to the other worldly form, that is simultaneously both alien and instantly recognisable. I believe it is a rather original subject although it reminds me of “Mor-rioghain”, a Celtic Goddess, typically associated with Fate.

She was regularly seen flying over the battlefield, foretelling doom and death in battle, in the form of a mighty crow. Her name has many translations and had been referred to as phantom queen or entity that was wreathed in terror and nightmares. She was sometimes referred to as a witch or even a banshee and frequently described as a triple Goddess, one of three sisters, the daughters of Ernmas: Morrigan, Badb and Macha. 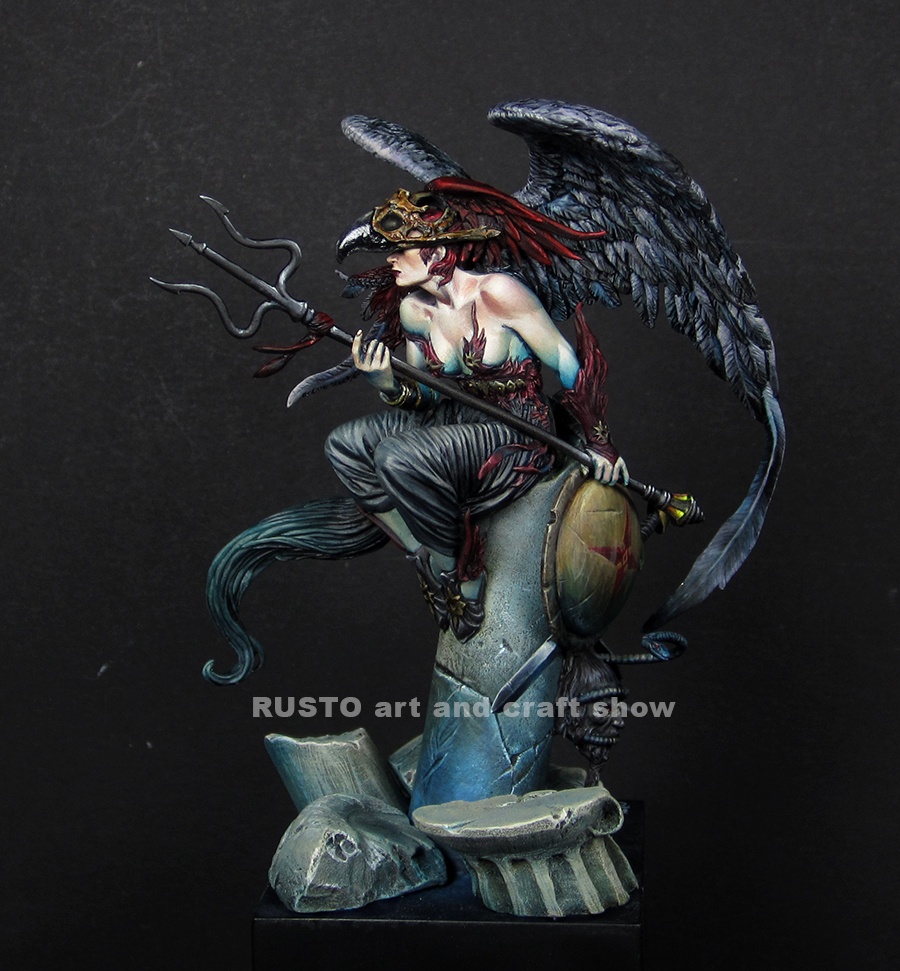 the moody and beautiful boxart

To think the three releases so far came about simply through an email between Vittorio and Gerald (fans will rejoice to know there is one more release due on the current Brom franchise/licence) is quite staggering when we think about it. I do not think there is currently a more enigmatic and fitting Artist to lure to the world of Figure Art than Brom and I for one can not wait for the final release.

Well what can I say, Brom, Terrible Kids Stuff, Pegaso Models and Andrea Jula is some Dream Team right? The fact that this is a review of an item that is no longer available, in fact the 100 copies SOLD OUT in less than 12 hours, points to how desirable the kit is. Acyually I have a host of their miniatures with quite a few of those also SOLD OUT, which I believe is Testament to how wonderful their products always are.

If nothing else, let this review serve as the nudge to LIKE their Facebook page and stay up to date on future releases, as I have already mentioned there is currently one more release under the Brom licence scheduled more than likely for some time this year.

This piece of Art and believe me there can be no doubt about that title, would cost you $70 which I believe still offers incredible value for money, in particular if you are an avid fan of Gerald Brom’s work!