This write up is a little different, being that I have been trusted with one of the masters, prior to its official release, indeed I have been sat on the figure for several weeks awaiting the stunning boxart by Sergio Calvo Rubio. As such I haven’t received the actual packaging and any of the other trimmings, just the parts in ziplock bags, wrapped in bubble wrap.

The figure in question is Anne Bonny, a 75mm, eleven part, polyurethane resin kit that includes a nice scenic base and some nice treats including: 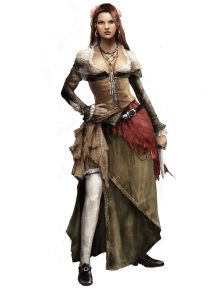 Anne Bonny as depicted in the Assassins Creed games

Anne Bonny, born at the end of the 17th Century was christened Anne McCormac in Cork, Ireland. Daughter to Mary Brennan and William McCormac. Anne was taken away to hide from her fathers previous wifes’ family, she was dressed as a boy, called Andy and eventually fled to the Carolinas and dropping the “Mc” from their surname to better fit in.

Most historical papers and references to Anne have been lost or destroyed and most of what we know about her comes from a book titled “A General History of the Pirates” by Charles Johnson.

She was described as red haired, “a bit of a catch” with a fiery temper to match. She married a small time pirate James Bonny, who had ideas of inheriting his father in laws wealth, but William Cormac, disowned Anne.

Her and her pirate husband fled to the Bahamas, living on New Providence Island, a sanctuary for English pirates, known as the Republic of Pirates. It is here her life would change forever. She was to meet John Rackham aka Calico Jack, captain of the sloop (single mast sailing ship) “Revenge”. John became her lover, they had a son and she divorced her husband. 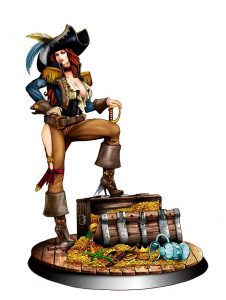 They formed another crew, stole a larger ship and became quite notorious for capturing smaller ships and amassing a sizeable pile of treasure. Despite her becoming an infamous pirate, named in “Wanted Pirates” circulars etc she never actually commanded her own ship.

In 1720 their sloop was attacked by a Kings ship, under commission from the Jamaican governor Nicholas Lawes. Only Rackham and Bonny put up much of a fight, the rest of the crew being too intoxicated to offer any resistance. Rackham was hanged, yet Bonny pleaded for stay of execution on the grounds that she was pregnant.

There is no conclusive proof that she was ever executed. One theory is that her freedom was purchased by her father and she was married off, having eight children and living into her eighties!

This has been traditionally sculpted by Jaroslaw Smolka based on the concept art by Alessandro “Shin” Trambetta. The main piece is almost complete, only the left leg and hand need  attaching. There is no socket as such for the leg but it is cut in such a way the fit is obvious and there is no need for gap filling. 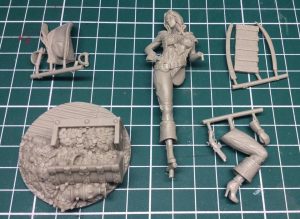 The facial features are delicate and handsome with a quiet confidence suggesting she was a powerful and persuasive individual. Her hair is wonderfully sculpted with some very nice curls towards the ends as it flows down her back.

She is depicted here as athletically built yet with curves and it is nice to see a design of her with her breasts not totally on show. It has to be said though that it was recorded that she regularly went about her days topless or at the very least with her breasts exposed.

The high collared jacket with epaulettes is very nice, with detailing to trim and button holes. The bodice is nice, frilled with great textures and this takes us down to her belt. The belt with large buckle is accurately rendered, with sharp holes and nice undercuts.

The sleeves of her jacket have natural looking creases and her slender hands are fitted with gauntlets. Her leggings are rather provocative, clinging to her curves and showing her exposed buttocks.

Again sporting nice creases and evidence of the fabric being cinched. Her boots are elegant and extravagant with nice detailing and textures present once more.

Her hat is attractively adorned with edging, compact frills and feathers, further accentuating her rather gaudy attire. The two additional parts include a pistol with fine detailing to the trigger guard and cocking mechanism.

The second is an alternative sword hilt with the Jolly Roger motif. The cutlass blade is rather plain and simple looking, no warping or defects though and the scabbard has nice, fine pattern running its length.

The scenic base itself is a cracking piece of work too, an open chest over-spilling with pirate treasure, coins, bottles, vases etc The small coins look incredible and the chest is nicely detailed with wood grain and iron supporting bands.

The rear showcasing the hair and her curves

The last piece is the side of the chest that attaches via pin and hole assembly. This is a nice touch, it means you can paint the entire contents of the chest with ease and then attach the other side after painting.

The cast was done by GRX Creations and as we would expect the quality is very good. There are no defects such as air bubble holes or casting slippages, there’s no moldlines, with just a little flash to remove from the sides of the corset. The sharpness of the details and undercuts to straps and buckles is exceptional. There is a little clean up required along the rim of the base and you are good to go. Time spent prepping this figure should be minimal.

Pirates are a really popular modelling subject and there have been some female versions appearing recently including of this particular person. It seems to follow that a release of a particular subject, especially those particularly popular, results in others being released straight after. This figure is particularly well done, very attractive, with lots of painting potential. The design and composition is very well balanced.

Kabuki Studio have a growing fanbase, with 10,000 Facebook followers and 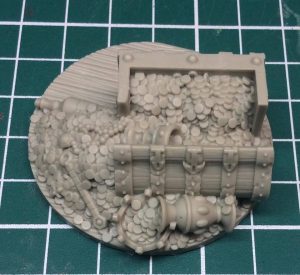 Stunning detailing to the chest and its contents

burgeoning reputation. In the last year or so they have began to forge strong relationships and form collaborations with some of the very best figure painters in our hobby. The quality of the sculpt and cast along with the subject make this piece in my opinion particularly appealing and desirable.

The limited edition pre-order price for this kit is €45, rising to full retail of €50. I think this is a fair and reasonably competitive price point for a 75mm figure of this quality.