Tony Diterlizzi illustrates and writes popular children and young adult book series including Spiderwick and Wondla. I was always aware of his Spiderwick books but never really attracted to the fairy world. I discovered the sci fi series, Wondla, while searching out an age appropriate book series that would get my children reading. I ended up more interested in the series’ illustrations than my kids interest in reading. I sought out more of Mr. DiTerlizzi’s artwork and found Dark Horse’s Realms art book which collects works from his Dungeons & Dragons commissions. TD illustrated the Planescape campaign world and a Monster Manual, reinventing and introducing many new characters and creatures in his signature lighthearted style.

Dark Sword Miniatures developed a new artist line based on many of the Realms illustrations. TD even developed new characters especially for DSM.

As part of the review of his past Planescape work, Tony revisited one of his favorite designs, the young Tiefling. Rather than drawing the character in action in the wilds of Planescape, he painted a classic royal portrait of the character sitting with her Displacer Beast pup familiar. 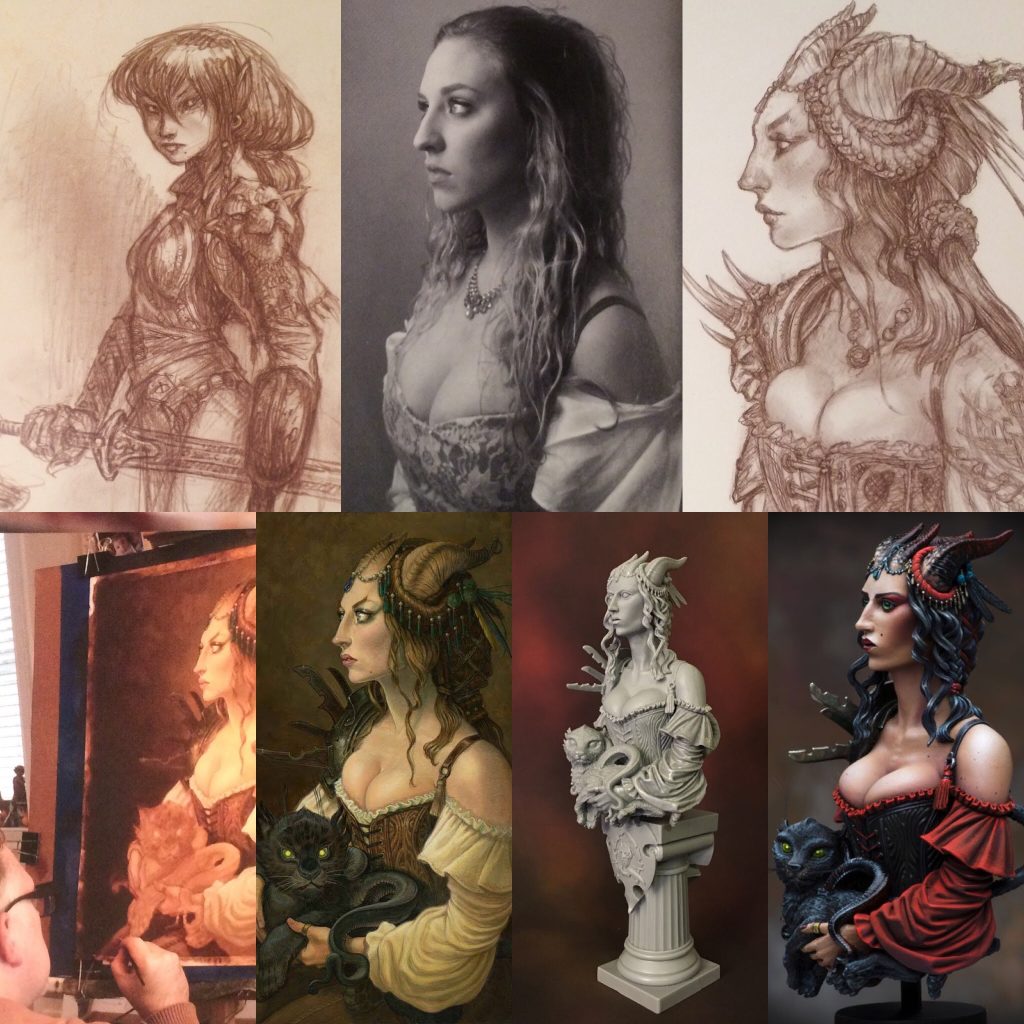 So impressed with the portrait and by request of their DiTerlizzi Kickstarter backers who received the small scale version of the character, DSM commissioned Tom Meier to translate the sitting beauty into the company’s first limited resin bust. Mr. Meier sculpted the bust traditionally with close oversight and approval by both DSM and the original artist, Tony DiTerlizzi. The bust was expertly separated, keyed, and molded. DarkSword Miniatures production went through many molds even for this limited run as they could only pull 30 pieces before the molds’ condition would affect quality. Though the development and production of the bust generated high costs, Dark Sword Miniatures couldn’t be more pleased with the final product.

Dark Sword Miniatures’ Portrait of a Young Tiefling resin bust ships securely with three major pieces: the torso and head, the lower left arm holding the displacer beast, and a stylized pedestal. The kit also includes five smaller pieces on two sprues: the large horns and head dressing, shoulder pad spikes, shoulder pad crest, and displacer beast’s tail. DSM provides very clear and helpful resin preparation instructions and some promotional post cards. As a treat, DSM will throw in a bonus miniature as part of larger orders to encourage spreading the word about the boutique company. I was lucky enough to receive the small scale Portrait of a Young Tiefling figure as a bonus. 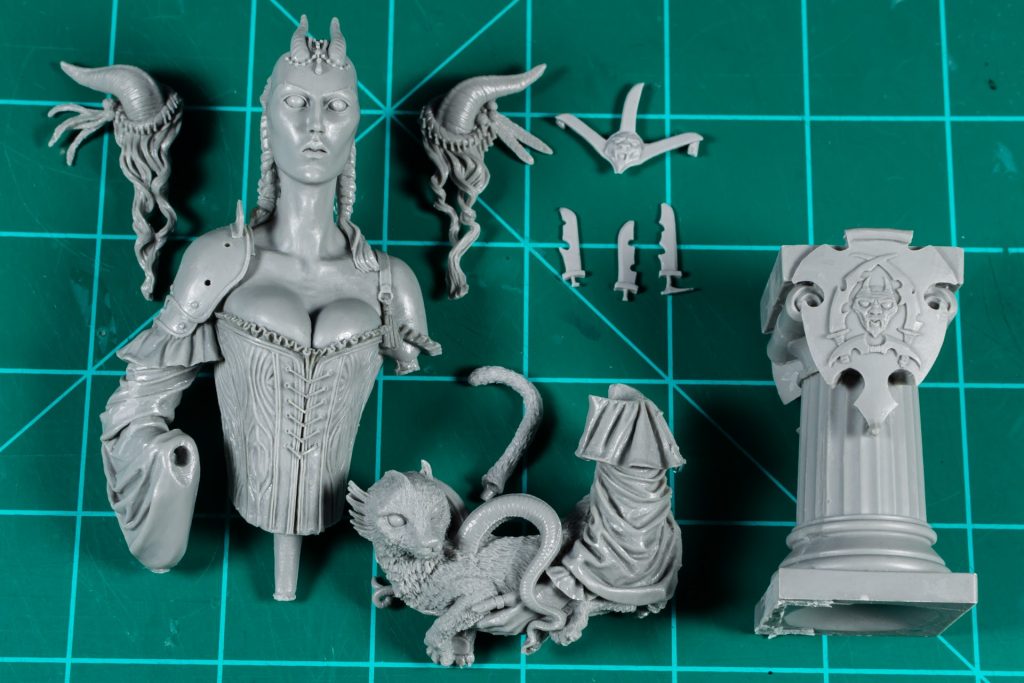 The full kit parts showing the front of the torso/head, left arm and displacer beast, and display pedestal. 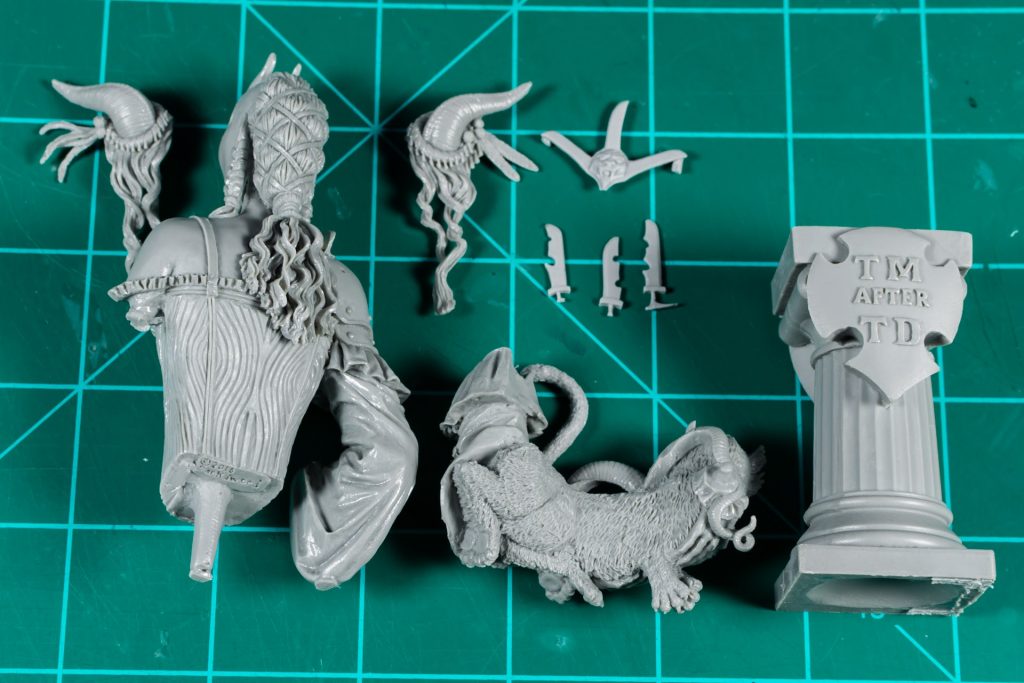 The full kit parts showing the back of the torso/head, left arm and displacer beast, and display pedestal.

Dark Sword’s production team cast a very clean kit with minimal mold release lines and no air bubbles. The mold line running down the right shoulder pad will require major cleanup with some sanding and patching. DSM strategically placed all mold lines and resin pour tabs in obscured or hidden areas, for example, in the left arm socket, the back side of the horns or the bottom of the pedestal. The quality of the resin pours and mold pulls left no detail obscured, filled in or softened. The cast preserves subtle micro surface detail such as the fine texture of the Tiefling skin. Overall, the bust’s cast will satisfy the more discerning bust enthusiasts.

Tom Meier’s sculpt captures the original artwork’s character, pose, and mood. The tiefling gains an otherworldly viel through the sculpt of her elongated head and neck, sharply pronounced collarbones, cheekbones, and nose. Her embroidered corset adds a sense of royal formality and near paralysis that softens at her pushed up breasts. The pose hurts. The displacer beast contrasts her rigid pose with a relaxed, unwound sense of ease, secure in the arms of its mistress. The bust reminds me of Blade Runner’s replicant, Priss, sitting dead still, lying in wait to surprise Deckard with her deadly acrobatics. The bust features a mix of surfaces and textures that will positively challenge skilled painters, including smooth flesh, embroidery, ruffles, loose blousey sleeves with many folds, beast fur, curly and braided hair, plate armor, tiefling horns, jewelry, and marble. 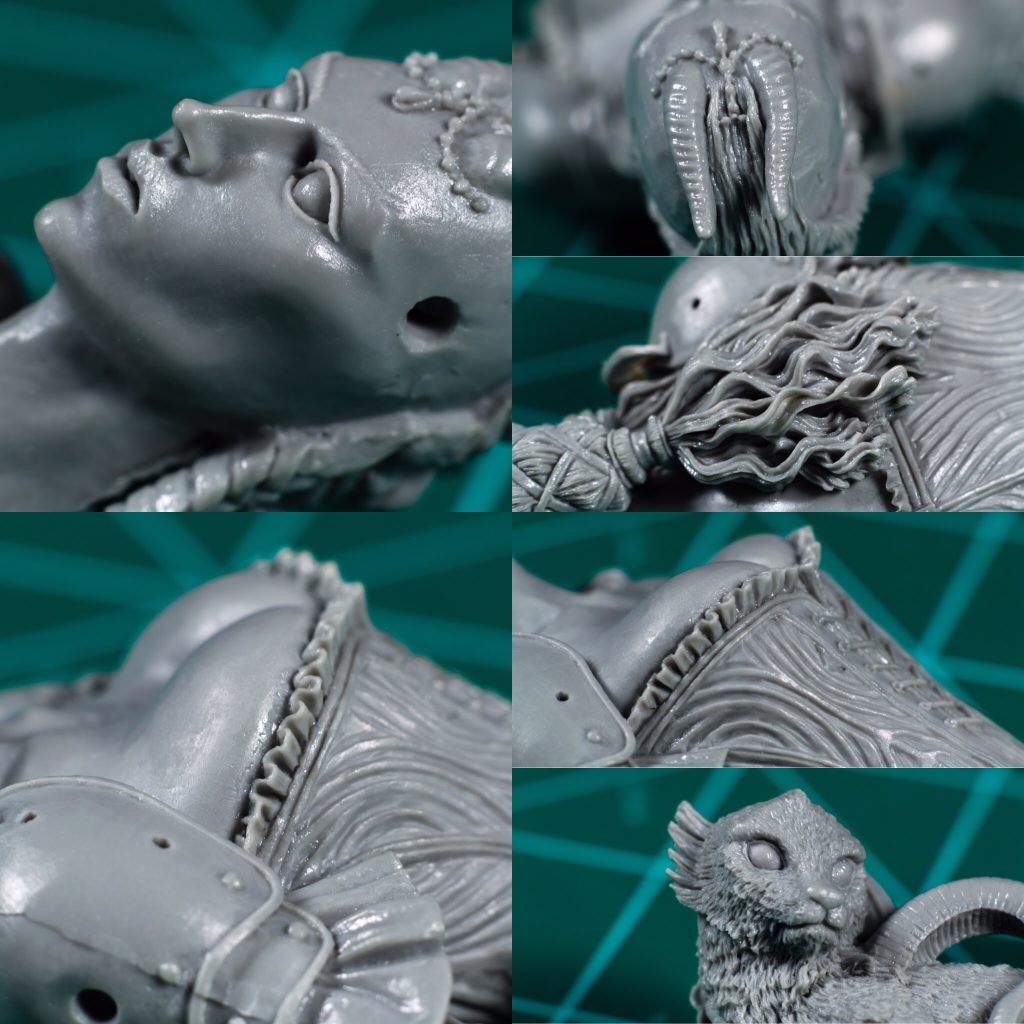 A collage of detail close ups revealing the variety of textures and expert casting.

Mr. Meier added some extra details not present in DiTerlizzi’s final portrait, but found in the earlier studies. He sculpted a tiefling or feline facial relief on the trident shoulder pad emblem and a similar face on the pedestal’s shield. I appreciate any extra faces to paint on a sculpt.

The bust leaves some wiggle room for assembly with deep male and female domed sockets. I detected no warping on any of the parts even though some have long thin section like the hair hanging from the horns. With the peg extending from the bottom of the torso, you can pin it to the decorative pedestal or cut it off and insert a rod for placement on a plinth. Either options results in an impressive display of the bust.

Tom Meier’s sculpt of the bust achieves more than just an extrusion of DiTerlizzi’s original portrait. He infuses it with with a symmetrical design calling back to classical sculpture busts admired in art museums. Every added and enhanced detail strengthens the bust’s design unique from the original art. The addition of the pedestal vertically balances the bust in space and helps to break it out of the original’s rectangular frame. The bust complements and improves on the original art and brings it one step closer to reality. 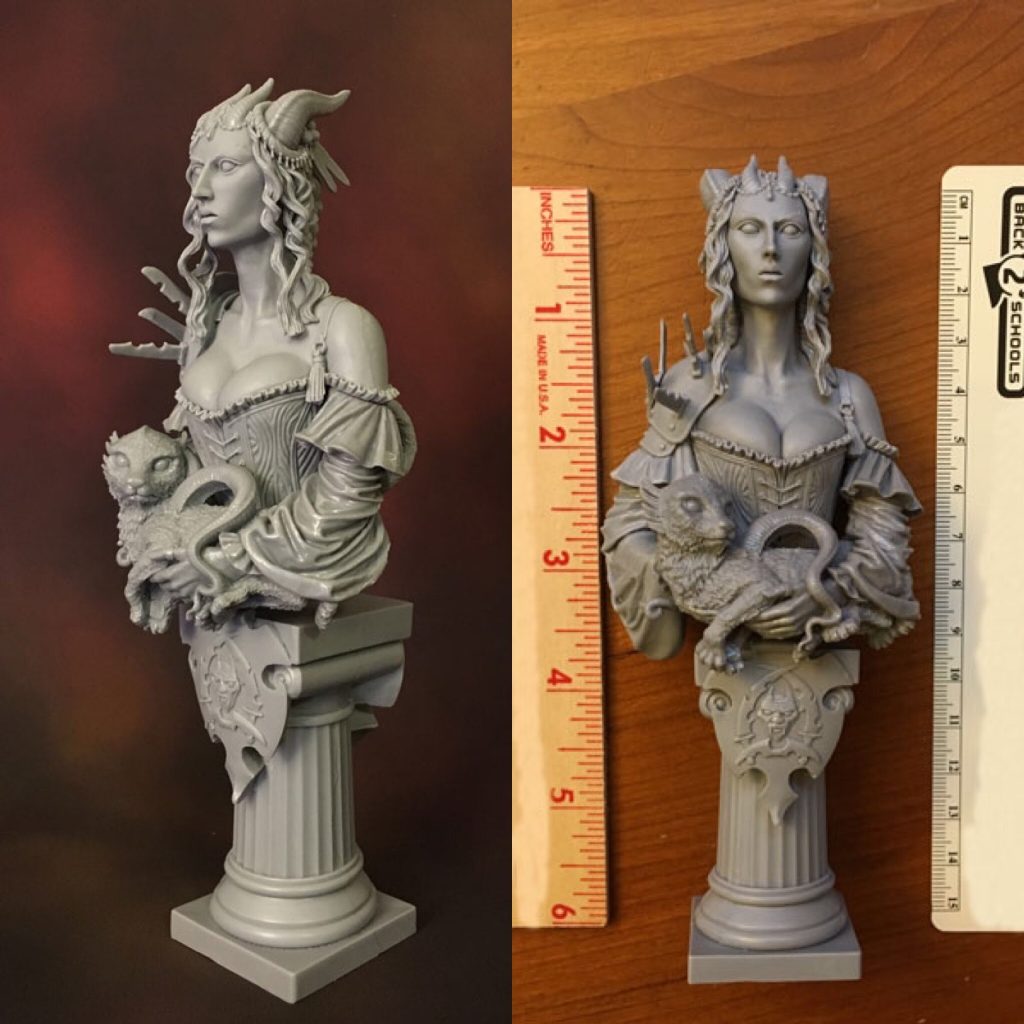 The Portrait of a Young Tiefling resin bust deserves shelf space in any Tony DiTerlizzi fan’s collection. The bust should also appeal to Dungeons and Dragons and Planescape fans. Bust painters will find a challenge in its variety of surfaces and projecting their own character onto the fine canvas of her face. If this is your first interaction with Dark Sword Miniatures, you will be amazed at their customer service and love of the hobby and their customers. Dark Sword really succeeded with their freshman entry into the world of busts.

Raffaele Picca’s amazing interpretation of the bust should excite all bust painters and show them the creative possibilities with the variety of surfaces. 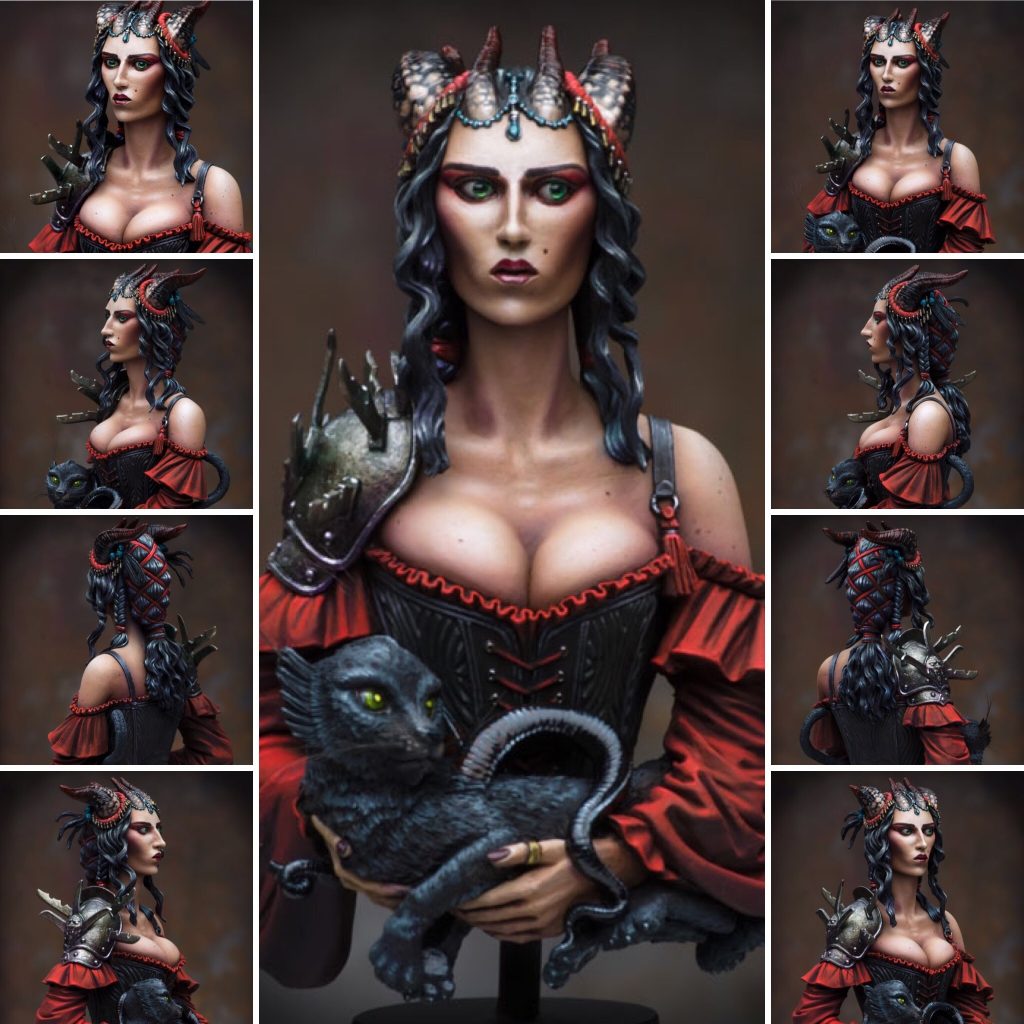 Raffaele Picca’s painted rendering of the Portrait of a Young Tiefling bust seen from all angles.

Dark Sword Miniatures priced the bust perfectly at $69.99 USD for a well cast 1/10 scale kit. Forego a few meals and get your order in.

You can find a detailed exposition of Tony DiTerlizzi’s process in this iO9 article. 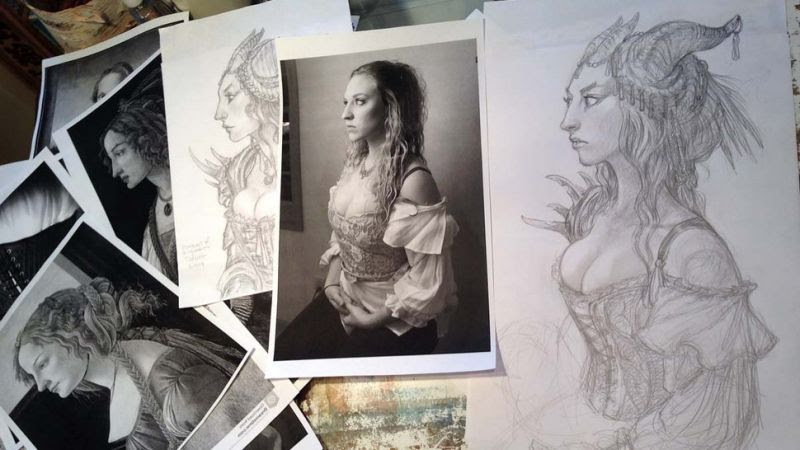