This figure is one of my favourites from Altores Studio, Pikeman of the XVII century, English Civil War, with its unique shapes and volumes, it offers the figure painter a wealth of opportunity to try something new.

Pikeman is a eight part, polyurethane resin kit, with a square scenic base, sculpted by D. Shevchuk in 75mm scale with an immaculate and crisp casting. It arrived in a sturdy white box adorned with the box art by Aleksandr Kataurov. The parts come sealed in ziplock bags and nestled between layers of foam. First impressions  are very good indeed!

The English Civil War (1642-1651) was a series of armed conflicts between the Parliamentarians and Royalists, predominantly over how the country was governed. It was common practice that any local force would be commanded by a local member of the gentry and thus the funding of these forces was entirely local. Many of  those who owned land but who were unable to fight would make a sizeable contribution to the upkeep of these forces. However,  this financing was haphazard at best and so fighting units always had an impossible task to maintain armour and operational weapons themselves, a cost out of their own pockets. 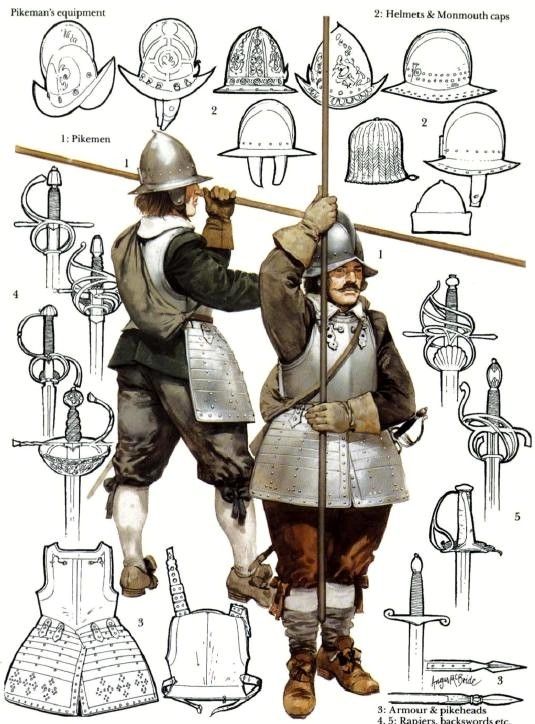 Commanders of these soldiers chose their ‘colours’, usually displayed as a sash worn around the body and so every individual within one unit would wear the same colour. It is important to remember though that certain colour dyes were cheaper than others and were frequently used by both sides at the same time. For example the red shown in the boxart, was a reasonably cheap dye and would often be worn at the same time in battle by both sides. Although there is a possibility that the Pikeman depicted here could be a member of the New Model Army who all wore Venice Red uniforms.

The most common types of soldier were found in the foot regiments, containing musketeers and pikemen. Each regiment contained 1,300 men and was divided into ten companies with each company having (in theory) two muskets for every pike. However, cost of muskets compared to pikes and the high rate of desertions make this theoretical formation almost impossible to adhere to. 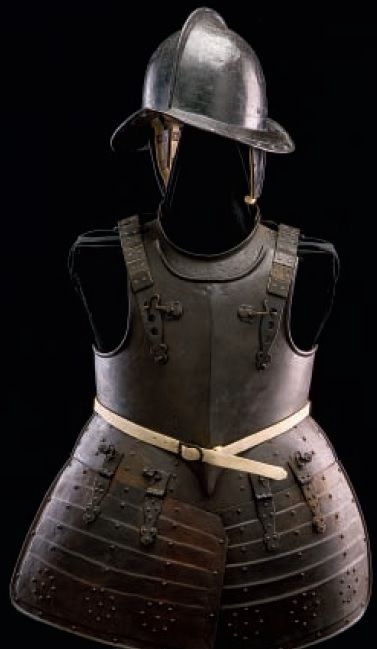 Great reference image of the armour

Generally the soldiers wore a buff coat (a jerkin made from buffalo hide) over their clothing. This offered a modicum of some protection, say against a glancing blow but a penetrating hit or deep slash was a different matter. Pikemen were also issued with a set of armour, which consisted of a corselet (a back and breast plate) and tassets (thigh guards) also known as almain rivets. Their pike was about eighteen feet long and made of a hard wood and reinforced in the key section (near the front) by metal bracings and was also issued with a sword for close quarter combat.

The sculpt and cast is of a very high level, the main piece consists of torso and legs with locating holes for the arms and head. The fit of the parts is perfect with no gap filling required. There is a little excess resin on the flat surface of the arm cuts which need removing to achieve the perfect fit but clean up throughout is minimal. The lengths of pike will need straightening, you can do this with tepid water or hairdryer. 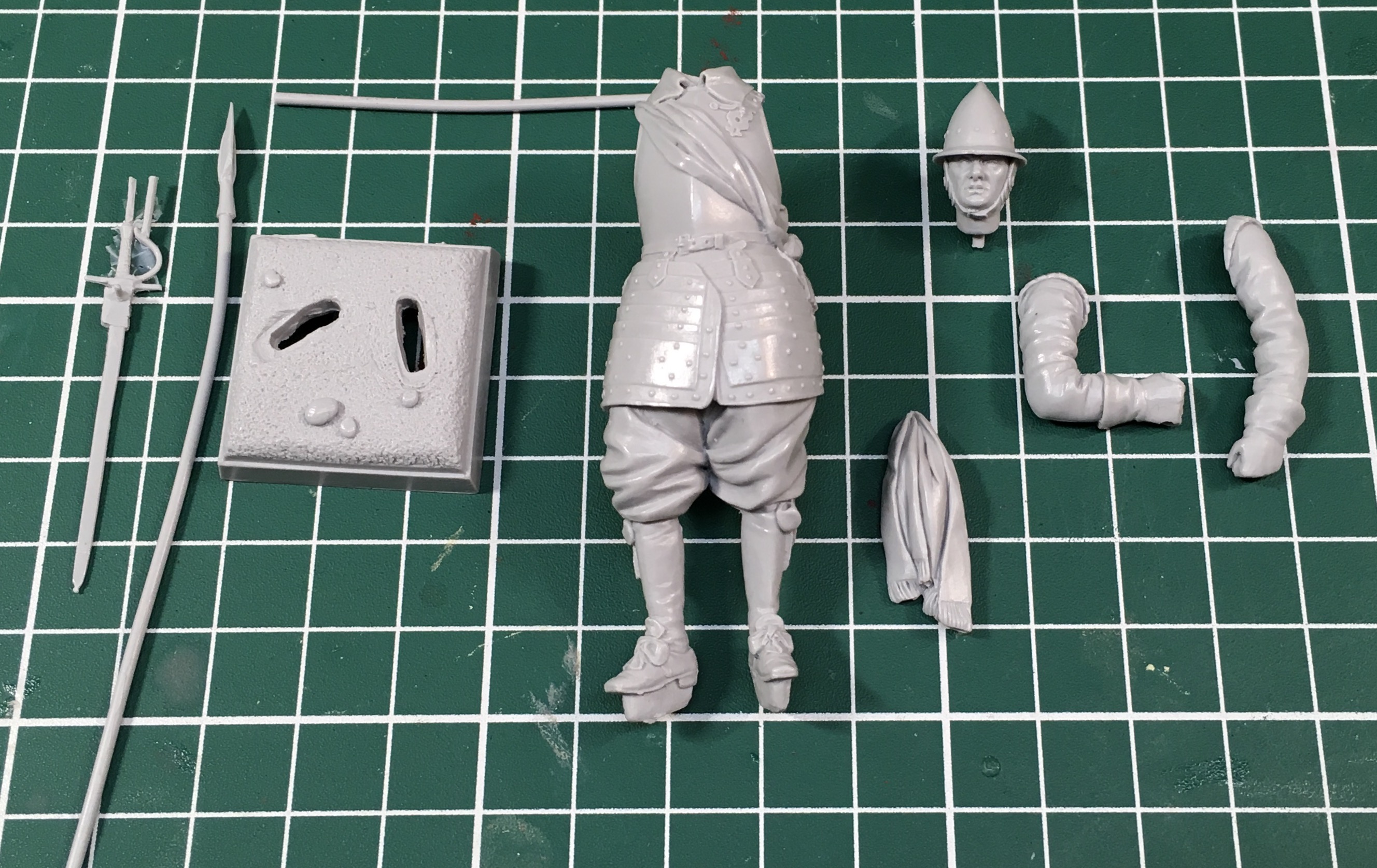 The corselet is nicely rendered, dimpled at the lower back to receive the bolted, multi layered tastes that cover the upper thigh. The rivet detailing is spot on and below this we have the broad, heavy hanging pantaloon style trousers tucked into his knee length, bow tied stockings. His footwear is typical of the period and again tied with a bow and displaying nice detailing throughout. 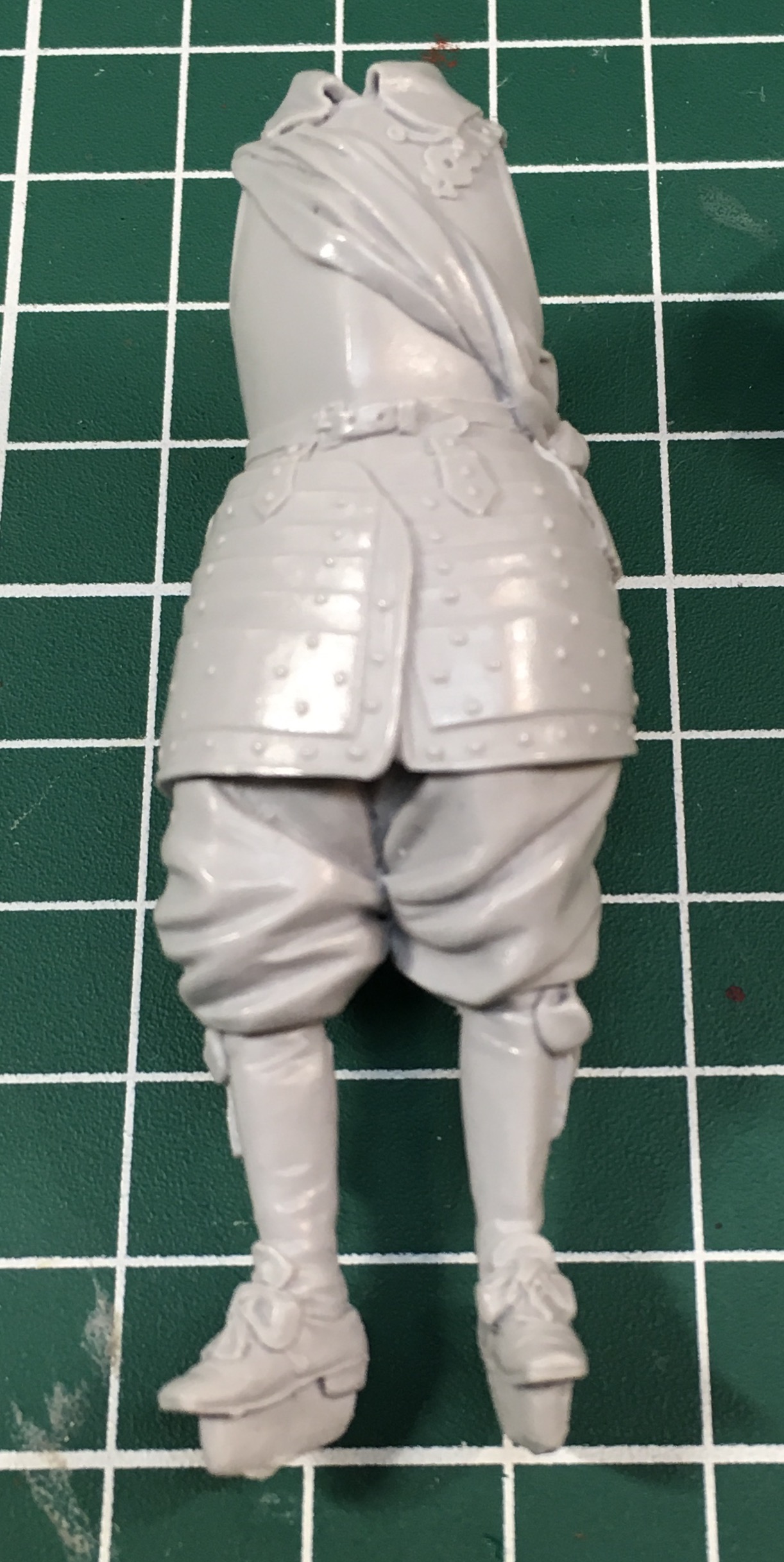 The sash across the chest, running diagonally from right shoulder to left hip has wonderful folds and creases just like the trousers and the sash end is a separate piece that attaches at the hip via small peg and hole assembly, the sculpting sports sharp und routs throughout and crisp detailing. The arms attach nice and snugly and rage right hand is drilled out to receive the two halves of the pike, which should make attachment so much easier.

The helm to the head is typical of the period with studs around the lower perimeter and the segmented armour, leather chin strap is tied, nice detailing to the buckle work. The hair is simply yet effectively rendered and the facial features are fine if somewhat chubby, almost a hint to the Pikeman’s non military background. The sword is of the basic type with nice detailing to the handle and pommel, basic hand guard with a long pin to attach to the left hip. 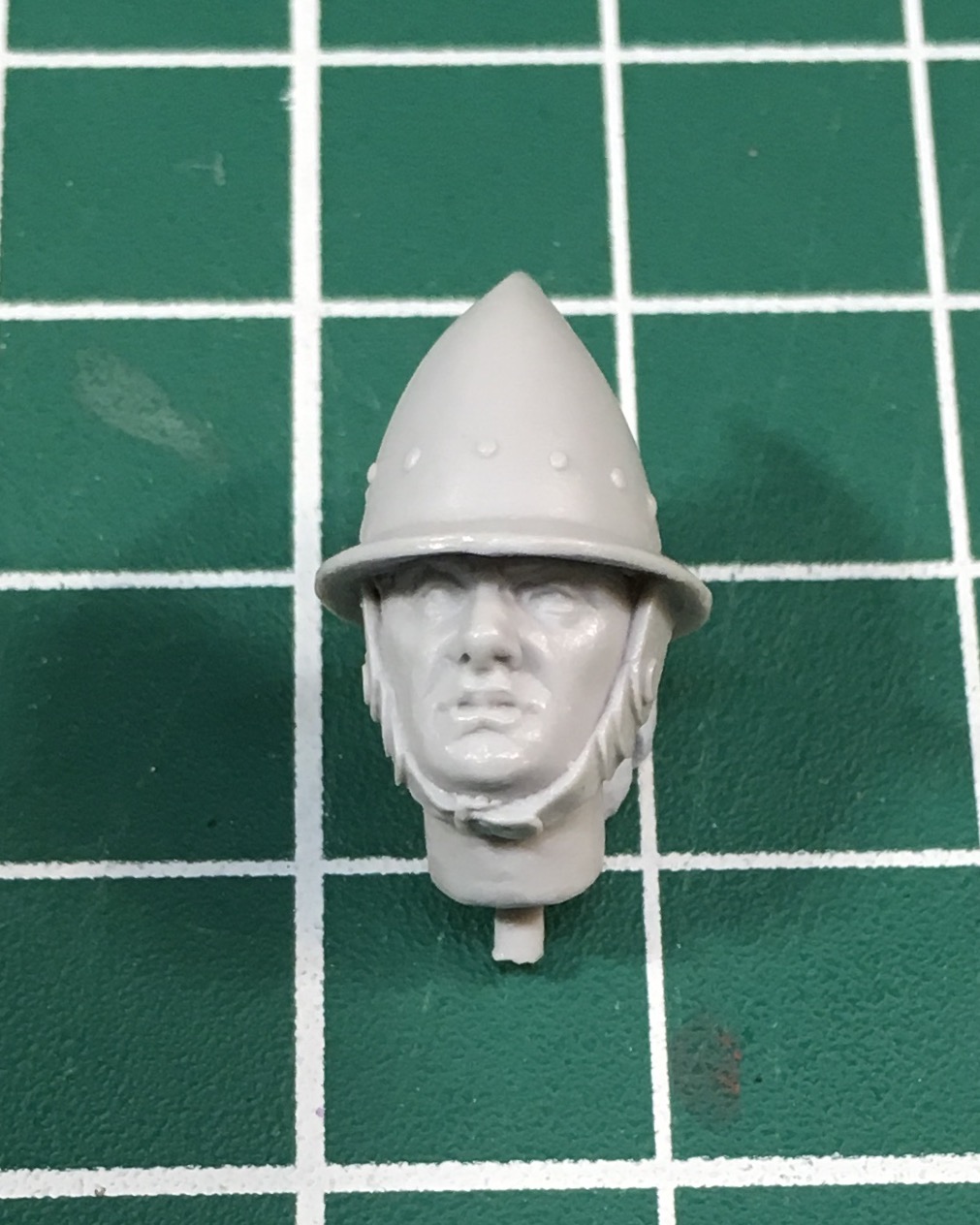 The base is rather simple fare, textured surface with a few stones and footholds to receive the figure, slightly sunken. The cast is nigh perfect with very little preparation, a bath in soapy water and good to assemble. 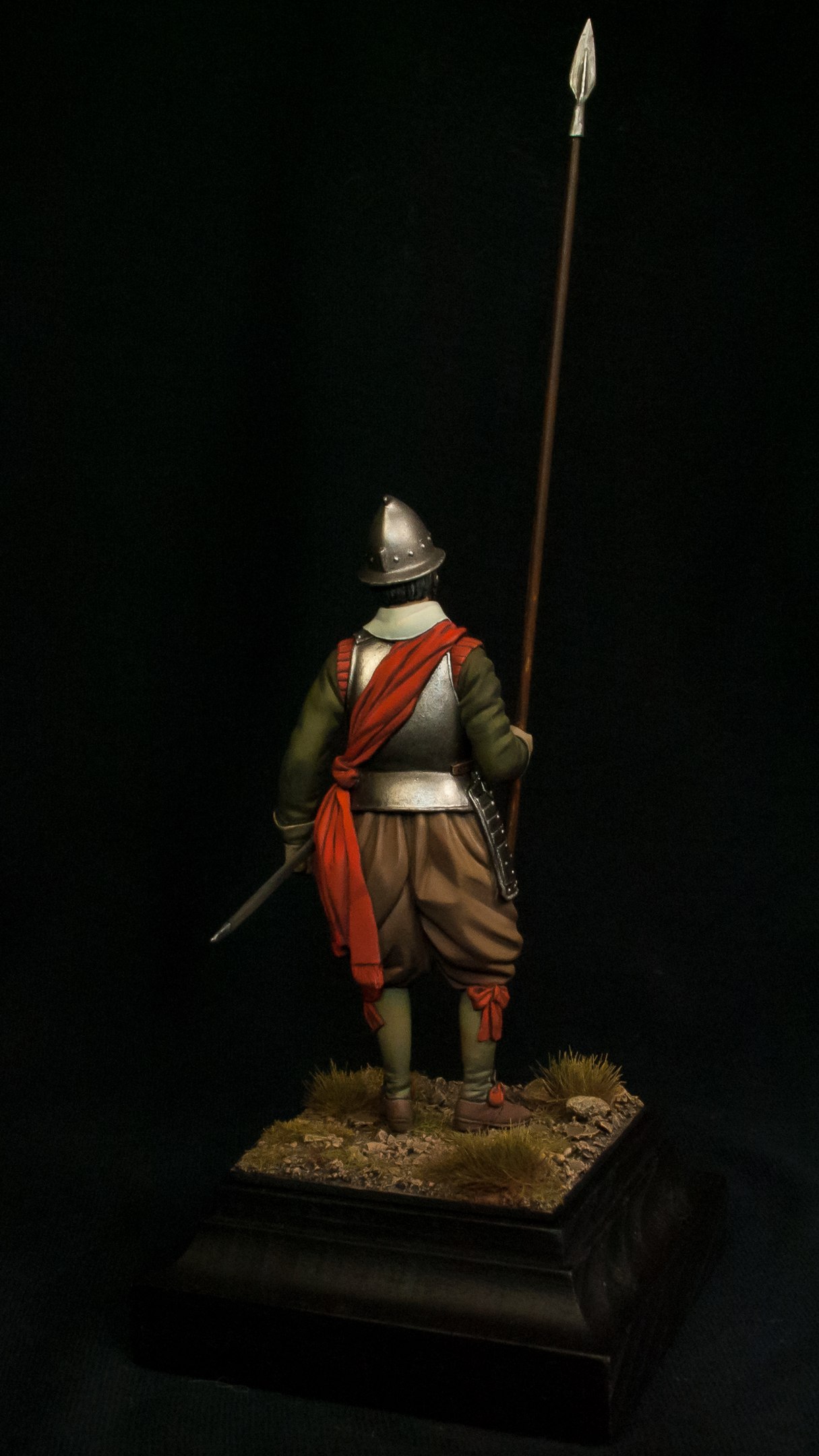 Reverse of the boxart

It is always nice to see figure of The English Civil War and the standard of the sculpt and detailing is perfect, it’s a rather simple and static pose but one which lends itself well to a Pikeman taking a moments respite. The pose is balanced and creates a nice silhouette, would look great on a understated base.

As always it is matter of personal taste but would obviously appeal to the historical collector and painter, in particular those with an interest in The English Civil War which for many fashioned modern England.

At £35 I believe this is a competitive price point, the design, sculpt and cast are all of the highest quality.