It’s a Piece of Cake – THE PRELUDE

I met Jinkoo, the creator and owner of La Historia Miniatures, a couple months back when he approached me and bought the Sail Away bust I painted. Jinkoo is a big collector and it was a great honour for me that he wanted a project of mine to sit alongside those from master’s such as Kirill Kanaev in his cabinet. As it turns out it was also the first ever female subject he had purchased, wow!

Over time we have become good friends and he asked if I would review  this figure, having been blown away by it on social media and sites such as Putty & Paint, it was pretty obvious I would be only too happy to research and review this kit! 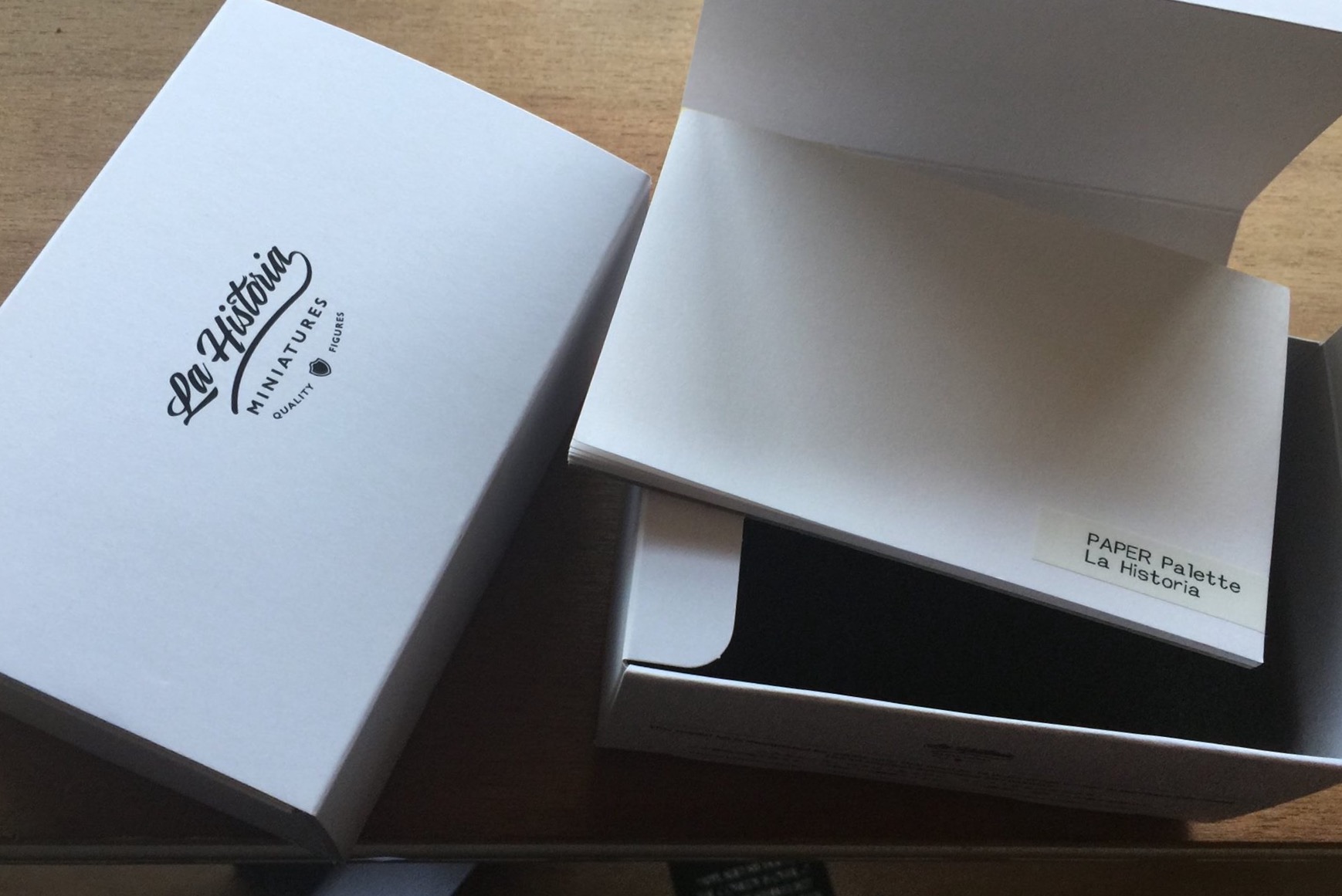 “It’s a Piece of Cake” arrived in a high quality box with excellent presentation. The box itself is enveloped by a white sleeve with the rather “up market” looking logo. The box lid is adorned with the fabulous boxart by Man Jin Kim with the sides containing the relevant data relating to the company and product, a nice touch here is that it is presented in such a way it can also be read using Braille. 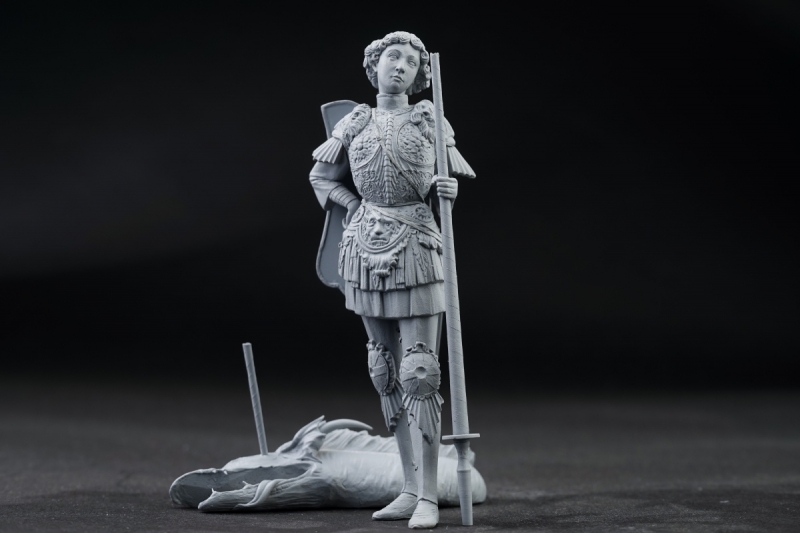 Inside we find the kit sealed in a plastic bag and nestled between layers of foam. This is a 9 part, polyurethane resin kit sculpted by Richard Seo in 90mm scale. I have to say first impressions of the sculpt, cast and presentation, are very good indeed, the whole kit speaks of a high end quality.

The kit is clearly based on a piece of artwork titled Portrait of Saint George by the Italian Renaissance painter Carlo Crivelli (1430-1495). Born in Venice, into a family of painters, he did most of his training there before finishing his Artistic studies in Padua and began working as an understudy in the workshop of Francesco Squarcione.

Despite several of his images being immediately recognisable, actually there is not too much known of this artist. He painted in a late Gothic style in Tempera despite oil colours becoming the trend at that time. Tempera was a fast drying, permanent, paint medium consisting of colour pigments within. Abinder such as egg yolk and was regularly used on panel paintings.

He moved to Zadar in Dalmatia (now part of Croatia) in 1459 following a six month jail term for adultery. Many of his Tempera paintings were done on wood such as the Portrait of Saint George, although some were eventually transferred to canvas.

A common practice of his was to employ decoratively punched gilded backgrounds with a conservative Gothic approach, more often than not incorporating decoration in the form of fruits and flowers in particular with paintings of verdant landscape backgrounds.

Another painting of his is Saint George slaying the dragon, which in all likelihood immediately precedes the Portrait of Saint George, the subject of our review. He often incorporated Trompe-L’oeil in his work, a technique using certain objects within his painting to deceive the eye to believe the panel is in fact three dimensional.

Commissioned by the Franciscans and Dominicans of Ascoli, his work was exclusively religious in nature, more times than not depicting Madonna and Child for instance. His paintings were often referred at the time as “grotesque” often showing deep and open wounds to Christ and the wailing and torturous nature of his mourners. Other than his commissioners, who clearly were in love with his religious ability, many did not like his work and he was never truly revered alongside his contemporaries. He died in 1495 and in recent years, especially in England for some reason, his works have seen a bit of a revival. 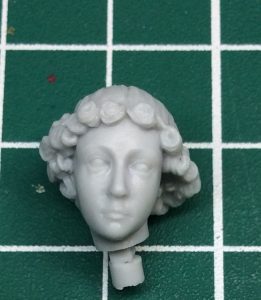 “It’s a Piece of Cake” by Richard Seo perfectly captures the nonchalance of youth and bravery in this piece and remains particularly true to the original piece of Art. From the facial expression to the ornate armour and down to the sleek and slender slain dragon. There is no scenic base with this kit and as there are no holes or pegs to attach George on or near the dragon, it offers you considerable freedom when planning your own composition.

Beginning with the dragon, we have the type that boasts a long slender neck with sail and the two swept back horns protruding from the temples, just behind the long ears. Seeing as it is a very close copy of the dragon from the Artwork, it feels of the traditional and historical type, it really helps to bed the kit in very well, to the period represented. The various textures to the dragon will make it interesting to paint yet it’s understated simplicity will ensure that our splendid George will remain the focal point. There is a pre-drilled hole to the dragon’s head for the length of lance that had snapped off. 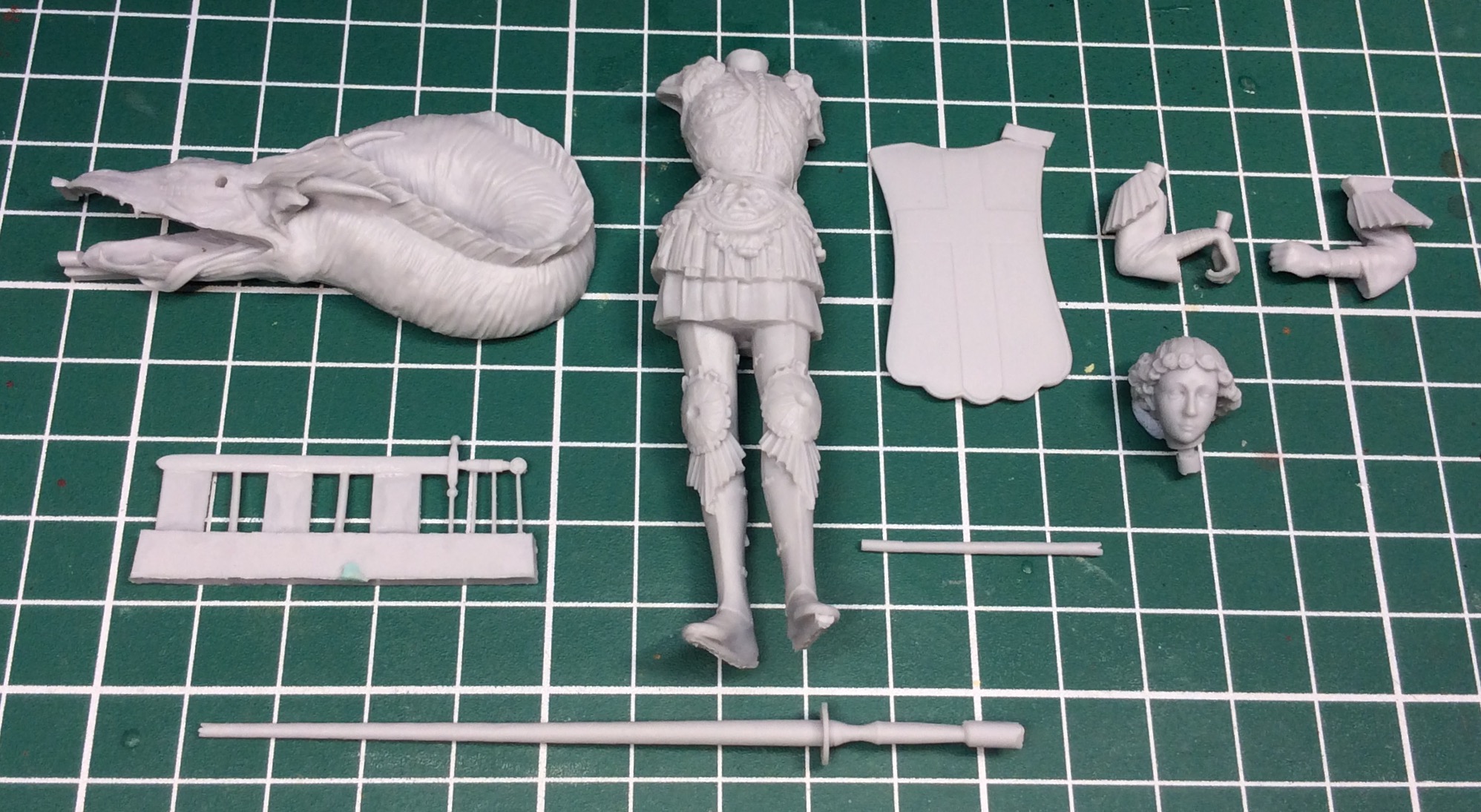 Everything about the sculpt is a nigh perfect replica of the painting and that includes the shield which is a very attractive shape, with the George Cross, embossed to its surface. There are two little pegs for it to attach to the back of our young George, although the top hole is not quite deep enough and so from the side you can see the peg. Either cut down the length of the peg or drill the hole a little deeper to rectify this. The sword comes attached to a length of resin sprue with bracing so as to prevent “warpage”, which is another clue to the quality and consideration that is prevalent with this release. 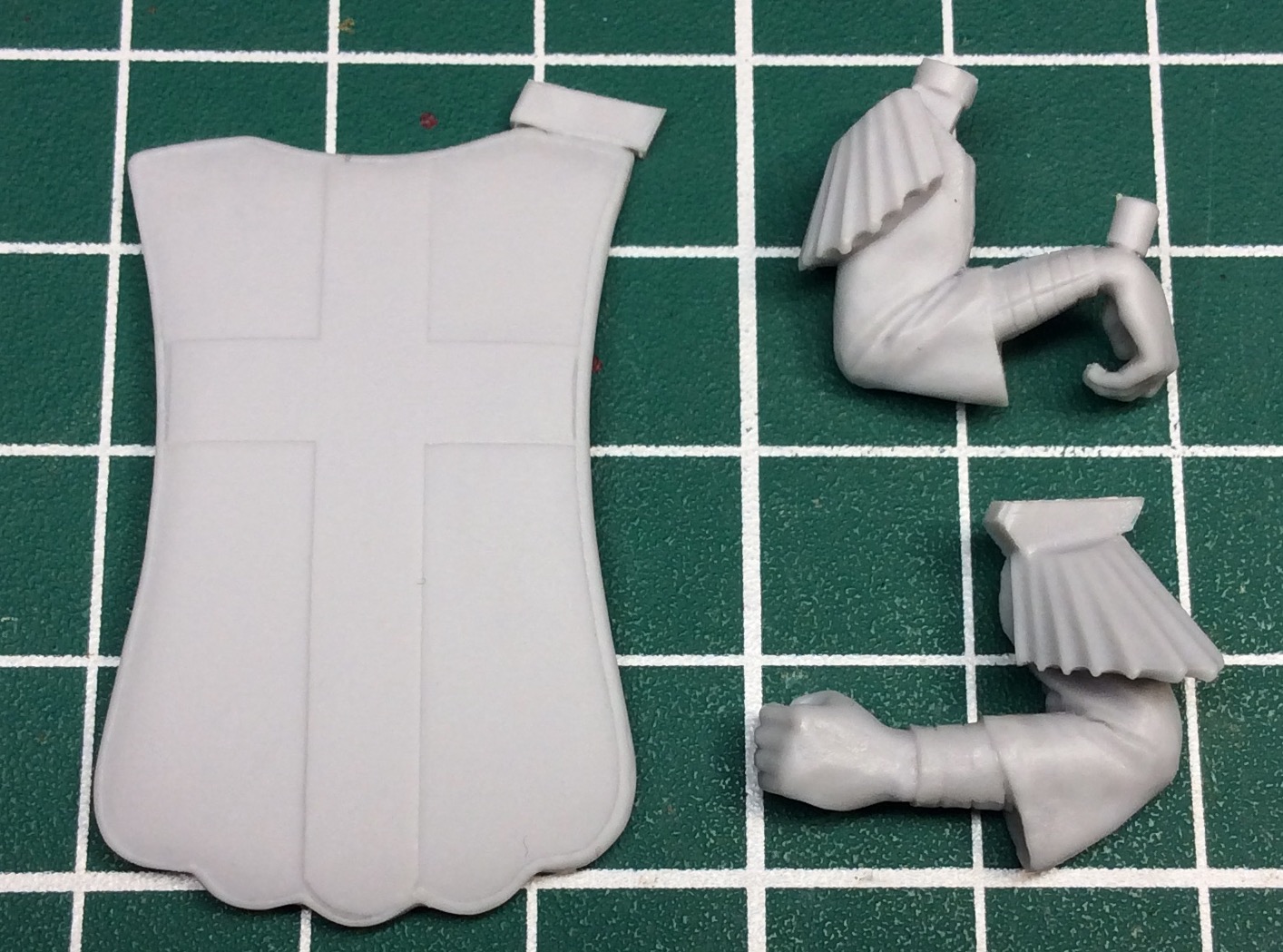 The arms and head all attach via a peg and hole assembly, the left arm bent at the elbow so as to hold the lance whilst the right is settled rather casually upon the hip. The head is positioned so as to be tilted and held slightly to the left, the expression is somewhat disinterested yet melancholic, as if he is almost regretful of killing the dragon on one hand yet on the other does not care one way or the other. It is in sculpture as it is in the portrait, the figure of Saint George is awash in Gothic detail, intricately sculpted and crisply cast.

exact replica of the painting

The level of the detailing both in quantity and quality is phenomenal and yet somehow remains balanced and not exhaustive. There are sharp undercuts, deep engraving and a finesse that is often missing in many sculptures on the market.

The cast is flawless with no major defects such as air bubble holes or casting slippages and preparation, other than removing the resin plugs on several parts and filing smooth, should be minimal and a quick bath in some soapy water should see us ready for primer. dry fitting shows that the fit of the parts is very good indeed with minimal or no gap filling required.

With the sculpt so closely based on the Artwork, the design is wonderfully balanced and enigmatic. I simply love the idea of this kit, Jinkoo told me that he really admired the Artwork and decided to get it sculpted and I for one am happy he did! I hope it is a signal of the things to come from La Historia as if you ask me there are way too many companies taking the easy route of constantly rejigging the same tired old archetypal characters.

At the time of writing this La Historia were busy sculpting 10 new projects and I can vouch for their originality, although I am sworn to secrecy! I believe we will see a lot from this company over the coming years and with Jinkoo’s passion as a collector and his acumen as a businessman, I think they are in for a lot of success. They already have a growing fanbase and with several high quality items in their catalogue!

Below we have a little gallery of the Boxart by Man Jin Kim of MJ Miniatures, the second set of thee images were produced by Dong Wook Cha!

At $75.50 this is a price at the higher end of what I can afford to pay for one miniature, yet remember this is a 90mm scale kit of the highest quality sculpt, cast and presentation and as such is a competitive price bracket.