Phlegethon is the third miniature from Aradia’s Dante’s Inferno Kickstarter campaign that we have reviewed here on Figurementors. Unlike Kristian, who wrote the previous reviews, I went for the full pledge and was lucky enough to pick most of it up while at SMC last year.

Just as the previous reviews, this is a product that’s currently unavailable outside of their Kickstarter campaign. 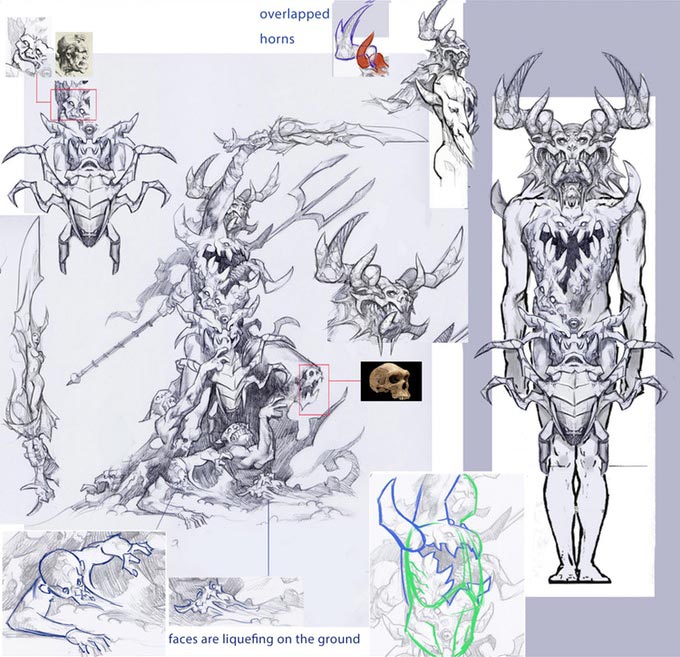 Phlegethon or Pyriphlegethon comes from Greek mythology and means Flaming or Fire-flaming and is one of the five rivers located in the infernal underworld together with Styx, Lethe, Cocytus, and Acheron. It runs through the first and outer part of the three different regions of the seventh circle of hell which is reserved for those who have landed in hell through their violent life’s.

The first region deals with the sinner who has committed crimes of violence against their fellow man in different ways, from murderers to tyrants.

Phlegethon is also the Greek river god associated with the river itself, a so-called Potamoi. The different Potamoi’s were the God’s of all rivers and streams in the world. The Potamoi’s are usually referred to being the son’s of the Titan God, Okeanos or Oceanus, but in Virgil’s epic Æneid, he is referred to being the son of Cocytus, one of the other river god’s of the underworld and in Inferno, Cocytus is the frozen lake that Lucifer is frozen to.

In the Greek mythology, the river is filled with boiling water and mud but in Inferno, it’s instead filled with boiling blood and the sinners spend eternity there being submerged at different depths, that is determined by the level of violence their sin contained. The whole river is being guarded by thousands of Centaurs that shoot flaming arrows at the sinners who try to leave the river or change the depth they are submerged in.

One of the leaders of the centaurs volunteers the centaur called Nessus as a guide for Dante and Virgil, to show them where they can cross the river in safely so they can continue on their path.

As I chose to pick up my pledge early at SMC, I did not get the kit packed in it’s planned box but when available in retail, this kit will come in a sturdy cardboard box divided into zip-lock bags just as the previous kits.

This is a big kit, it consists of 24 resin parts covering both Phlegethon himself and his base that feature two tormented souls that from the looks of it is trying to grab a hold of him as he moves forward in the river.

The kit is in 75mm scale, and when assembled on his base, Phlegethon stands around 85-90mm tall.

The sculpt is very well made as we have come to expect from Aradia. It’s a very smooth sculpt, without reducing the amount of fine detailing, which gives it a unique feel. There are plenty of fine details across the miniature and its base and they are all well defined and sharp as you can see in the photos. The base is also well sculpted, with some very fine details and they have really captured the chaotic flow of the blood-filled river and its movement.

The casting is also very well made. There are some very minor mould lines and a little flash, so some cleaning is required but it’s generally located in easy spots for removal without damaging the details of the miniature or the base. The cutting is well thought out and follows the form of the miniature and many of the parts have guiding holes and fittings to help with the assembly.

As you can see in the photo, I have dry fitted most of the kit and the parts fit very well together and with the guiding holes and fittings, this should be a relatively easy kit to build for one that consists of as many pieces as this does.

Phlegethon in the Greek mythology isn’t described much in the literature so Aradia didn’t have much information on how he’s supposed to look like, which must have been both a blessing and a curse. They had more or less free hands to create the concept of Phlegethon but at the same time, it had to look like it was from the Greek mythology, to have design similarities with the other sculpts in this range. The feeling I get when looking at the concept art and the sculpt is that they focused on the characteristics of the wild and chaotic river and applied that to the character as well, creating a demonic warrior type, rising up from the boiling blood while tormented souls are trying to grab hold of him. I think they succeeded in creating something that works both with the mythology, literature and to make it into a very interesting miniature.

Before Aradia launched the Kickstarter campaign, there weren’t any miniatures based on Dante’s work, to my knowledge at least, and I think they took a risk by going all out on the campaign. As this was a first it would be hard to predict the response of potential backers. The campaign ended up being very successful and they funded everything they offered.

If you have an interest in classical literature and Greek mythology, this should be a very interesting kit. It is a massive kit, with its 24 parts and with the amount of details and high quality, I think it’s a miniature that’s on the harder side to build paint but perfect for anyone looking for a challenge but more suitable for experienced hobbyists.

The cost of the kit during the campaign was 50CHF, which translates to around £38. What the price will be when its available in retail I do not know (I can guess around 60-65CHF), nor do I know when the kit will be available. Both the price I paid in the Kickstarter and my humble guess is a bit lower than expected when you compare this with other available kits in this size.