Orc on Wolf – the PRELUDE

Orc on Wolf is a new release in Terrible Kids Stuff’s Nether Kingdom, it is the ninth 75mm release in this particular range, which also includes four 54mm and two 32mm offerings. Like all the others in this series the Orc on Wolf is a limited release, there are only 100 copies available. 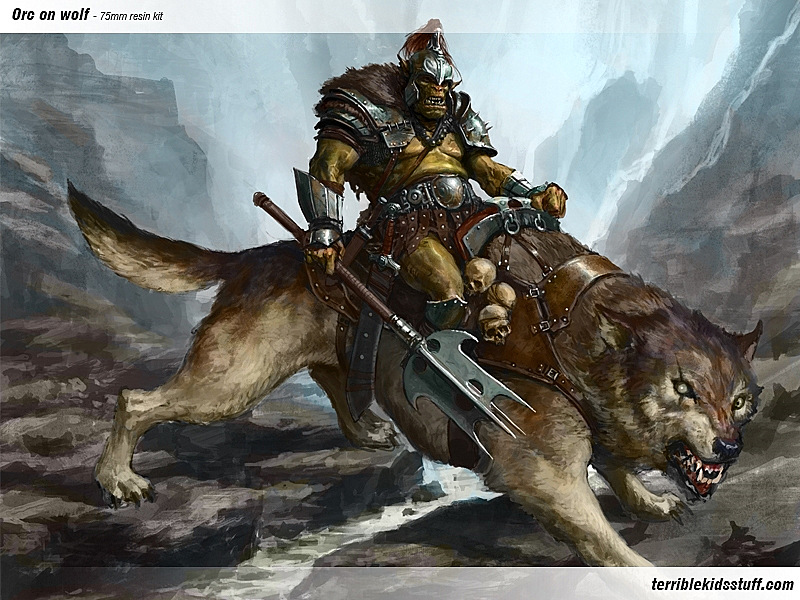 We have other reviews of Terrible Kids Stuff here, here and here check them out.

The kit depicts a slightly fat orc riding a giant wolf. He appears to be slouching in the saddle, yet tensely ready for action anyway, with a special four bladed axe drawn. He has a slightly understated air of menace and violence about him; like he may be relaxing now but he could attack at any moment.

The figure is in 75mm scale and measures 105mm from bottom to top, he is after all mounted. The figure is based on a piece of artwork by Karl Kopinski and sculpted by creature creator extraordinaire, Allan Carrasco. We have 2 boxart paint jobs on this release, the main version from Marc Masclans, that is based directly on Kopinski’s art work and an alternate boxart by John Keys, which also features another assembly option. I recently visited John Keys and had the distinct pleasure to see his box art paint job with my own eyes, it was fantastic.

The figure itself and for that matter Karl Kopinski’s artwork is very much a sort of generic orc wolf rider, he could fit into any fantasy setting. He is very much like I envisioned Warg riders when reading Tolkien before the movies came out. I think Allan Carrasco has captured Karl Kopinski’s artwork perfectly with his sculpt, not just creating almost a 3d copy of the painting, but capturing the feel of the whole thing as well. I think Marc Masclans’ paint job captures it as much, making a kind of echo, from painting to sculpt to figure paint job, it is uncanny. This is rock solid work by all artists involved, that shows great integrity and leaves me with quite high expectations. 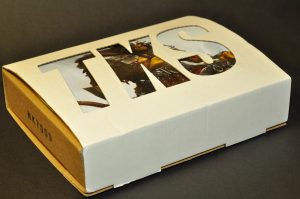 The big box in the mail.

The kit comes in a rather large box, with the TKS logo as a cutaway showing Kopinski’s artwork underneath, rather cool I think. The box is 18.5 x 14 x 4cm.

The box looks slightly bloated as if it is stuffed, a slight cause for concern, but at the same time a bit thrilling as it must contain a lot. Sliding the box open reveals a sort of wrap-around card with a sandwich of foam inside. On top of that is a nice print of Kopinski’s painting, on it’s reverse side is the cast number. I got number 41. 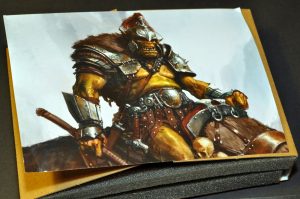 The inside of the box

I would have prefered a slightly larger  box for this one, but I guess they can’t make completely customized, perfect boxes for a small production of only 100 sets. The box seems sturdy enough though. My art print was a little wrinkled from having been jammed in this box and from the handling in the mail. I just hope the kit inside has been protected adequately by the foam and card.

Now let’s open the card insert. The foam holds a lot of resin parts! This is a huge kit consisting of 30 parts. The foam inlay is jammed with resin parts of all sizes and shapes, all safe and secure. 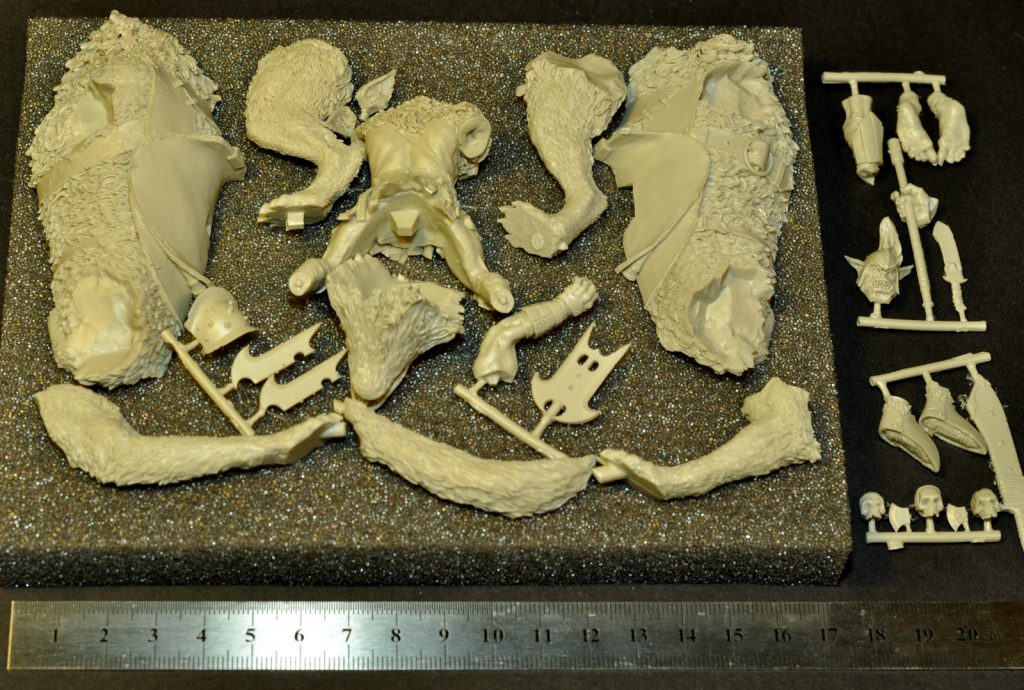 What the foam contains.

As you can see, there is even more parts than there is room for in the foam. Those on the right were fixed between the lower half of the foam inlay and the two layers of cardboard on the outside. This is what has me a little concerned; they are perfectly fixed in that position, but one side is hard cardboard and I suspect that if the box is too battered in the mail those parts are not sufficiently protected. My parts were perfectly intact, so this is only speculation, but a bigger box, with room enough for all parts would be perfect.

This is a big kit and the quality is great, as we are used to from Terrible Kids Stuff. The parts are finely cast with very little mould lines and no bubbles. There is some slight flash on the smallest parts which needs to be taken care of. Let’s break the kit down a little and take a look at the wolf and rider separately. 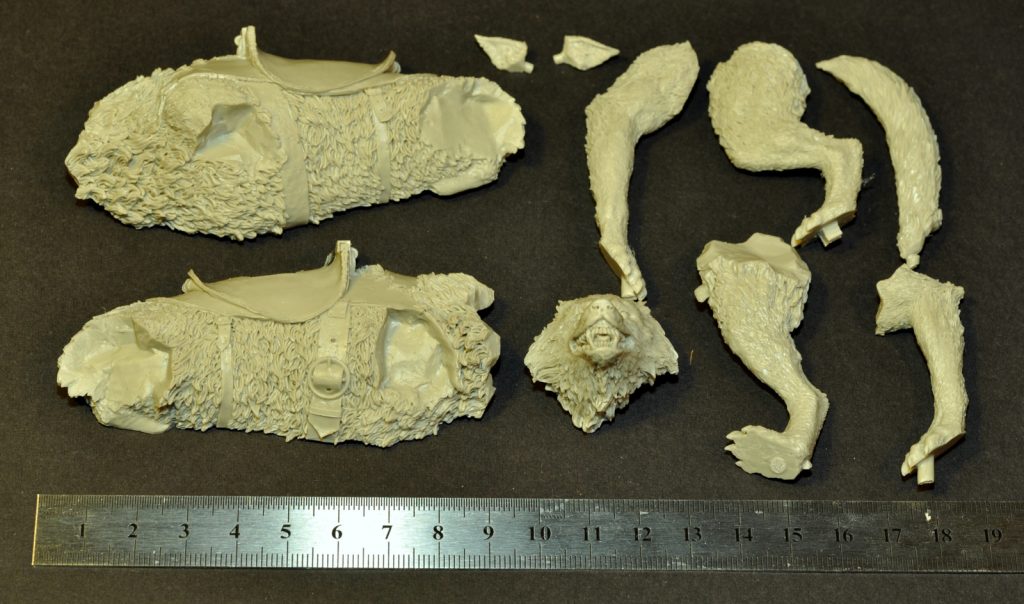 The wolf, a complete kit in itself.

The wolf is a complete kit in itself, consisting of 10 parts. The parts are finely detailed, I especially like the texture of the fur, it is very fine and has a nice natural flow to it. The cast is very sharp and there is not a bubble in sight. There are small mould lines here and there, most of them are placed in sensible places, like along an edge or on the planes where you are going to glue anyway. That is of course not possible everywhere and they need a little attention where they are not hidden. There are also a few pouring stubs, that need to be removed, but they are also sensibly placed for the most part.

Allan Carrasco is a master of cutting up the models. I’ve seen it before, very creative cuts, that follow the contours of the model and make for very discreet assemblies. Take a look at the wolf’s body (above gallery), the cut goes in a zig-zag line between tufts of fur. This creates a very precise assembly of the body and the assembly is almost hidden in the furry areas, needing very little filling.  Of course the assembly is more visible on the straps and the saddle, but these are smooth areas where it is much easier to sand the assembly flush.

It is the same with the joints between the legs and the wolf’s body and here the fit is even better! I think assembly of this kit will be very easy, though allowing for the slight warping of large resin parts of which there is next to none here, but still the big parts need a little adjusting and gap filling, but it is very little. The kit has many parts and is as such a rather complex  resin kit, but I think it will come together fast and without the usual difficulties of most larger resin kits.

The wolf itself does not look evil as we normally see in such fantasy miniatures.

The wolf has a slightly goofy expression which I really like, he is after all just an animal. The wolf will do his masters bidding but he has no clue to what is occurring, the wolf is a dangerous predator animal, but not a monster. I really think Carrasco has nailed that concept. He does get a little bit of an evil expression from the scar running down over the right eye.

The other kit in the kit, the rider.

The orc rider is also a whole kit in itself. The rider’s body stands at about 65mm but he has no feet, a separate head and is a little hunched over. If you could straighten his body, attach the feet and head he would measure 75mm or maybe even a little bit more. He comes with an option of either bare feet or armoured boots. You get separate arms again with those ingenious cuts for good fit and discreet assembly.

We have his strange four bladed axe, a shoulder plate, a knife and a sword sheathed, so he is armed to the teeth. There are also 3 small human skulls and 2 blade like things to decorate his saddle. Sculpt is good and cast precise, sharp and without bubbles, but the small parts have some very fine flash which has to be addressed. The attachment points to the sprues which is the kind of pouring stub you get on these small parts, are quite delicate and easily removed.

There is a wealth of finely sculpted detail, leather straps for armor and weapons, fur, a pattern on the belt buckle.  There are many different textures to work with, we have the bare skin, the fur, metals, leather, even different textures at the wolf’s lips.

Karl Kopinski’s paintings and sketches are always quite dynamic and full of life. I think that comes through admirably in this model. The image itself of a wolf riding orc is a classic from the books of Tolkien, I think this one is very reminiscent of characters like Azog or Bolg. As such the character is a rather typical generic fantasy villain. On the other hand it is very nice to see such an image that is not in any way lifted from the Tolkien movies, but more like what one would imagine reading the books. I have never either seen this kind of character in this scale or quality, I think there is a uniqueness here. 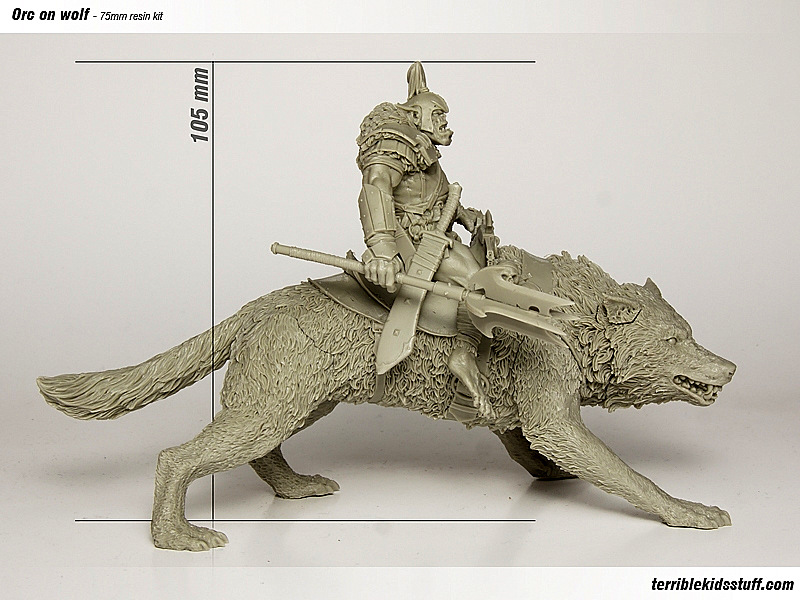 The orc has that slightly slouching, fat pose, we have seen on many of Allan Carrasco’s sculpts. He also has unusually long legs, making for a slightly elegant, even slender orc, quite the contradiction with his slightly fat upper body, also a typical Carrasco touch. It makes for a certain kind of attitude, which fit in with many people’s taste, but certainly not everybody, I like it though, I have always loved these kind of sculpts. I think the style fits this subject very well and it also matches Kopinski’s painting nicely.

If you are a fan of Karl Kopinski or Allan Carrasco I think this model is just the thing, it has many of their personal touches. Personally I think Kopinski and Carrasco is a match made in heaven, their art interlock perfectly to create a unique model.  If you are looking for a large high quality classic orc wolf rider this is probably the best you can get. It is a large semi complex kit of high quality. It has a lot of attitude and expression, yet aT the same time it really resonates with our older basic fantasy impressions it is almost nostalgic in the way it tickles my memory of old books.

At 70€ this is an expensive kit, but you get a lot of model for your money. Unpacking this I was genuinely impressed with its size. You get many hours of painting fun out of this one, I think it is worth every cent.

Be sure to look out for my upcoming article on painting this bad boy, coming soon (ish)!.

Where can I get it?     http://www.terriblekidsstuff.com/