This 1/11 scale Orc Raider, as hinted at in the title, is a crazy figure, it’s big, brutal, beautifully cast with a ton of options. I first became aware of these figures some time ago, back then the company were considering, selling the digital files for people to print their own, thankfully they changed their idea and now there are a whole series of brutal looking goblins and orcs in different scales.

The initial figure costs $55 and comprises 14 digitally printed, Polyurethane Resin parts. In addition, you can add various other elements such as a serrated scimitar or the large circular shield, available from the website at a small cost. In effect you can create your own version! I was sent a complete figure with some add ons, the parts arrived, wrapped in bubble wrap and secured in ziplock bags, within a large square, matte black box. First impressions were great, in fact I had no idea of the size of the thing until I started taking individual parts out, wowzers! Oh and the time of writing there was a type of SALE on their website HERE, called the Crazy Offer.

The design, sculpt and cast is all done by 3D Artdigital and I think this shows in the continuity of the theme throughout the figure and their other releases. Due to its large size there is a lot of detail and texture, some other companies have released large pieces and I have previously found the detail and finesse lacking, not here though. 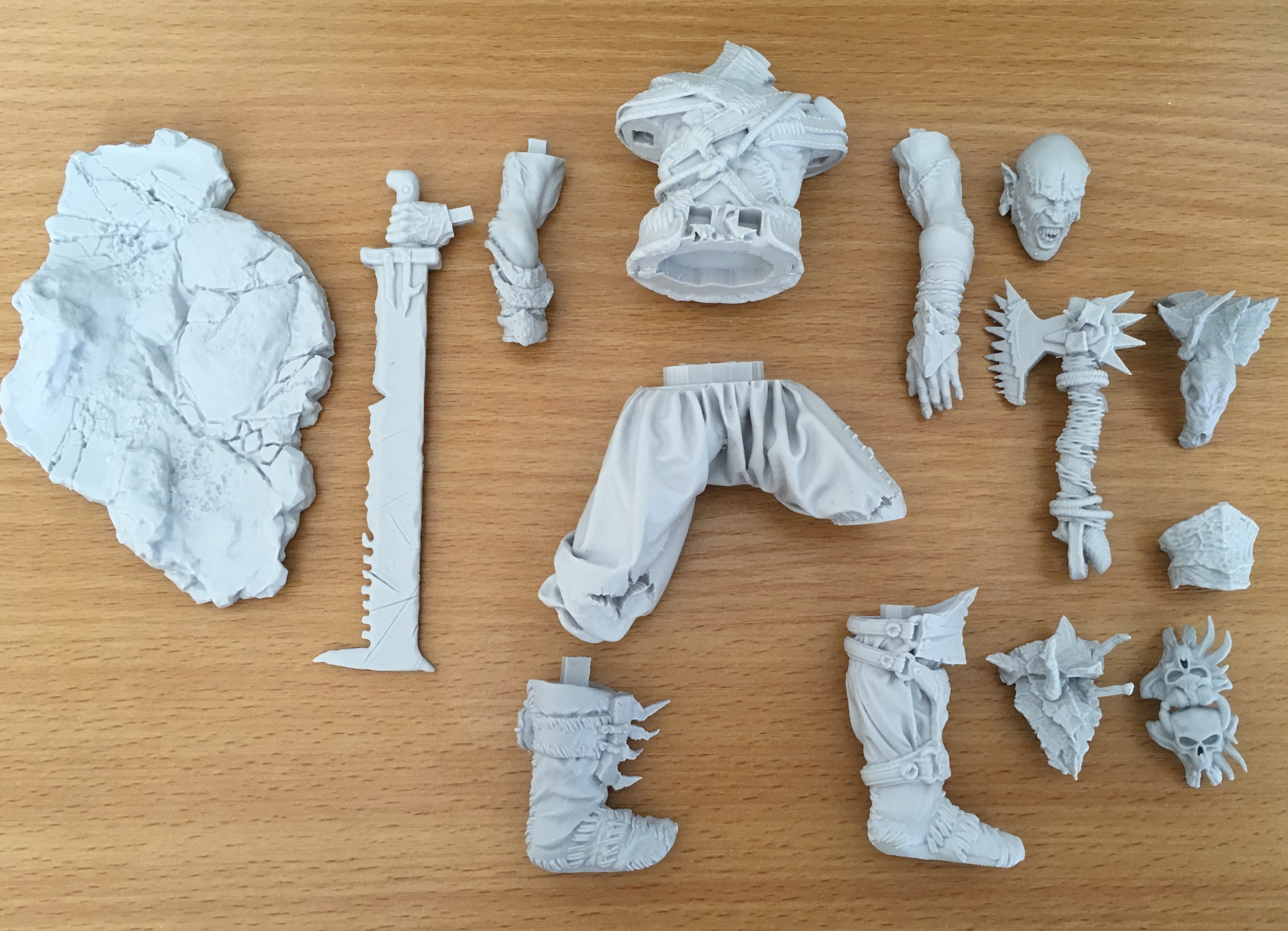 For the most part, the kit can be assembled consisting of 7 parts, head, torso, legs, feet and choice of arms. Upon this figure you can then add the various other parts including the armour and weapons. The main figure can be purchased with a large chopper blade and an axe that straps to the back. If you want to go crazy you can buy the serrated scimitar and/or the horned shield or indeed any number of optional parts, all are big, multi part and highly detailed. One thing that was not sent with my review kit were the magnets. The company provide magnets for the various add ons so you can swap out the various weapons and sections of armour! So cool! 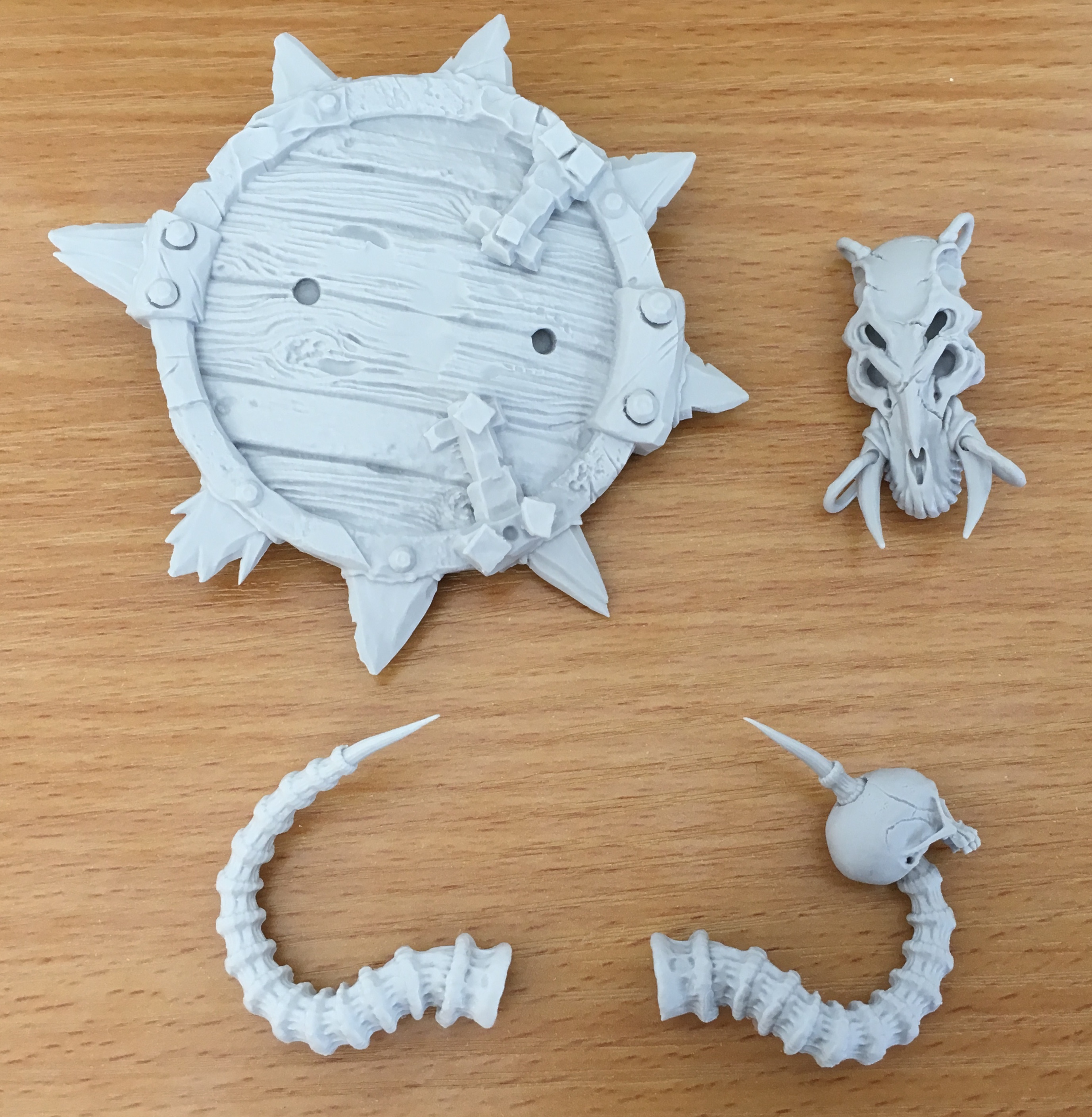 In my opinion these are probably some of the very best digitally printed sculpts I have seen, no printing lines, no accidental textures and superbly crisp detailing. Sharp undercuts where needed and delicately rendered detailing throughout. Dry fitting of the parts via large peg and hole assemblies shows no need to gap fill the arms, hands, weapons or legs although a little putty wash will be needed along the neckline, joining head to torso and also around the waist. 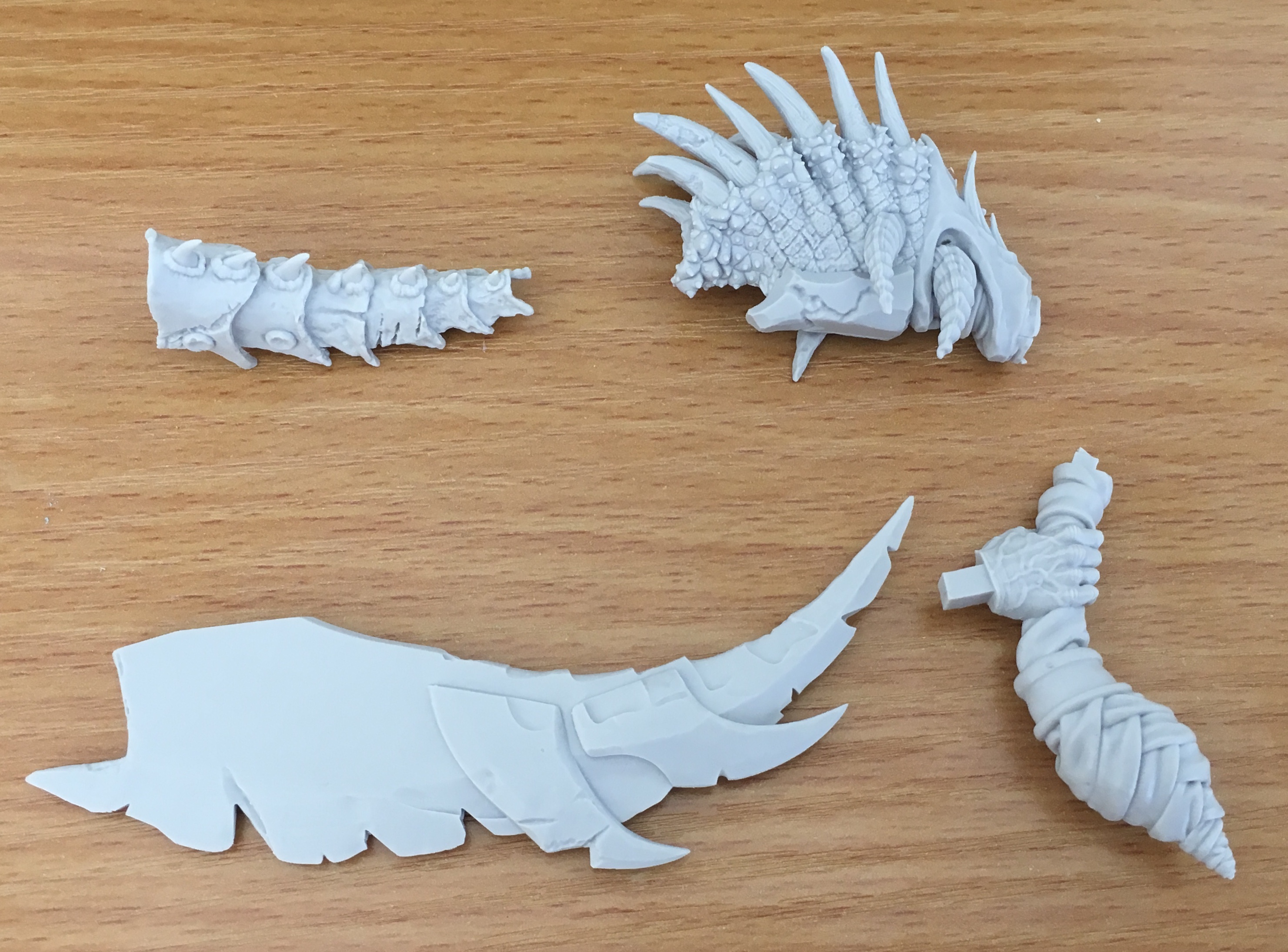 For the most part, the armour and weapons look like they’ve either been scavenged from some poor victim or created from a hunted beast, lots of spines, ribs and bones on show which all add to the menace emanating from the Orc Raider. This Orc Raider is nothing like the almost comical archetype from GamesWorkshop, he is malevolent intelligence and evil, more akin to those from LOTR. The head perfectly captures the savagery of the Orc Raider, pointy eared, pig eyed, sneering mouth and scars!

The textures throughout are excellent, from armour to material to primitive looking weapons and even the skin of the Orc Raider. All elements show interesting textures and excellent detailing once again.

a great colour render of the orc raider

I don’t recall ever seeing an Orc quite like this or this big and it is huge at 155mm, they have paid particular attention to its aggressive and dynamic pose and the cut of the figure means it can be fully assembled prior to painting, although if you go for the other options and magnetise the parts, you can paint it in a series of sub assemblies. The design is well considered, the anatomy is wiry and muscular with nice detailing and it is very well balanced, creating a dynamic silhouette.

This new range of orcs and goblins finally gives gamers and painters alike a ton of options, you can even design and print your own parts or print the files yourself. For the gamers we have traditional 28mm figures and these large scale figures would make exceptional competition/display pieces. I think the biggest issue for 3D Artdigital at the moment is their visibility within the painting community, I rarely see their work on my social media newsfeed, hopefully this review can help reach a larger audience so more can see how nice these releases are!

The basic figure is $55 which I believe offers excellent value for money and I am really happy to see, a small indie team put in the time and effort to create something a little different!