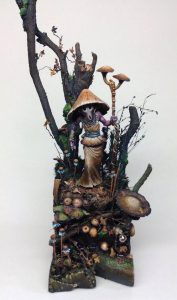 Time for another look at what the people behind figurementors are working on.  We’ve got three new team members, Anthony Rodriguez, Peter Müller, and Matty Pearce.  Welcome to the site!  Here’s a quick look at what they (and the rest of us) have been up to this past month.

Hey everyone, well the Mushroom Shaman was finished in time for Euromilitaire and Scale Model Challenge winning Silver and Bronze. Very happy with that, even happier with how it was received by the modelling community.

I really enjoyed creating the environment and had a lot of fun with the textures. I used cold colours such as blue, purple, green etc to help make the background recede into the shadows and used 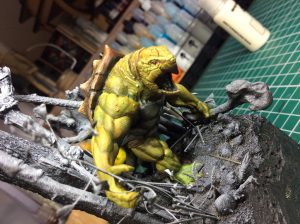 warmer colours for the shaman and indeed on the ground-works near him.

The eye is naturally drawn to warmer, more saturated colours so this forces the viewer to look at the figure and accept the scene around him. I’m currently working on Whati from Kaha Miniatures sculpted by the incredible Fancagne Didier and after that I plan to complete each of the projects pictured below.

I believe this will see a big step up in the challenge, these are complex and beautiful kits. The mermaid, a now out of production kit from the defunct company Origen Art will see me trying my hand at some extensive water effects. 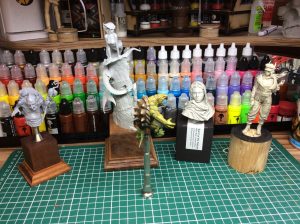 Kati from Luftkrieg 1919 is a stunning sculpt and has a lot of textures and materials. The bust from Romain van den Bogaert is beautiful and i have never painted female skintone before and then there is JuJu one of my favourite sculpts of 2016! Which would you like to see me paint next?

Next up we have the cycling, Euro travelling, new team member Anthony, who literally paints wherever 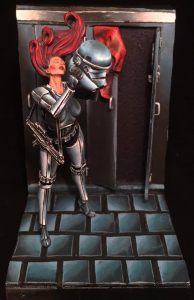 he is, no matter the country, his surrounding or the tools at his disposal.

Lt. Plasma was painted for the Poppys Angels Charity raffle. I was going for a full body TMM on her which was challenging on such a large figure. The orange hue of her skin helps to add contrast to all that blue steel. I simplified the lighting to help myself achieve the effect.

The Kingdom Death Survivor was a 3 hour sketch and study of the effect of light coming from a lantern as well as drop shadows on a 32mm figure. I think it is important to sometimes create smaller projects so as to learn or develop a new skill, at the 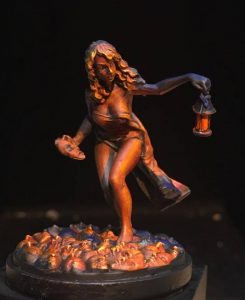 very least it will identify what I need to work more on.

Most of us love Space Marines so when I was challenged to see what I could get achieved in five hours by my friend Daniel Illingworth, I knew I wanted to do a brother of the Dark Angels! 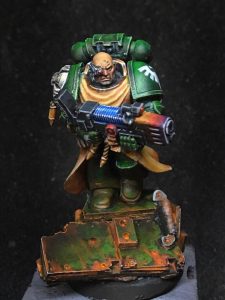 ry other week. Thereare always so many projects and idea though, who knows what will happen next week!

I took a break from Redghar (still trying to figure out how I want to paint the leather) and decided to play around with a bust I just received from Polaris Minor.

The kit is called ‘Count Melenth’ and looks to be part vampire and part ghoul.  I wanted to experiment with this kit and decided to paint it using dramatic lighting. 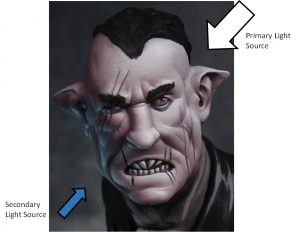 d three-quarter lighting, which is often using in portraits (2-D painting and photography).

Since a bust is basically the 3-D equivalent of a portrait, that seemed like a valid approach.  I then decided to use OSL to add a secondary light source.

This time the light would come from below and to the figure’s right.  I decided to give it a blue glow.  It’s a fantasy piece, so perhaps there’s some magical artefact that’s creating the glow.

When the bust is viewed from the front or at a slight angle, this works as an edge light (again, treating the bust more like a 2-D work than a 3-D one). 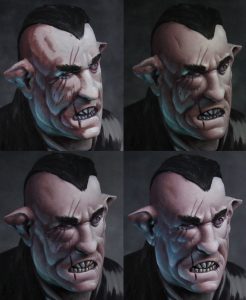 You can see a bit of how I developed the lighting effect on the figure.  I started with just a quick and rough sketch of the main lights and shadows.

I then worked on the portions of the face lit by the primary light source.  After that I turned to the OSL areas and worked to smooth and blend them into the rest of the face (bottom left).

I wasn’t quite happy with the look, so I decided to go back in and increase the highlights in the OSL, brightening up the effect.  I still need to address the rest of the figure (hair and clothing), but I’m very happy with how he’s turned out so far. 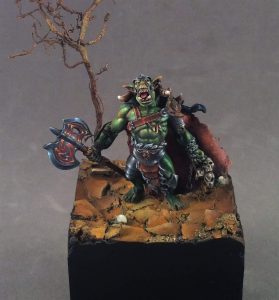 There’s been a shift in my painting of late, years of commission painting has stunted my growth as an artist to a certain extent.

As both figurementors tech support and friend of Jason Martin, I’ve been privy to some stunning works of art over the last few months, along with witnessing Jason’s drive to be the best painter he can possibly be.

All this has inspired me to attempt the same and concentrate on one model at a time, making each better than the last. So, starting afresh, I’ve just finished Volgor: Skull taker by Andrea Miniatures as my ‘first’ miniature with a new mindset. 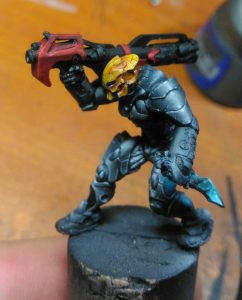 To be honest finishing felt good, so the next project, a random infinity figure that I liked the look of, is already underway, with a focus on a brushed aluminium style nmm, still needs a lot of work though!

MATTY PEARCE
For my first time adding to the monthly WIP blog here at figurementors I thought I’d show you the two main pieces I’m working on at the moment. 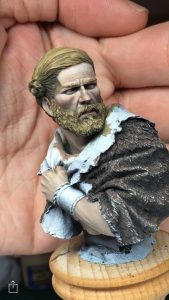 After coming away from Euromilitaire 2016 feeling ultimately inspired (as us artists often do after visiting a show with the calibre of figures on display and usual chatter among the masses).

I took a look at my work on returning home and decided I needed to challenge myself more. Get out of my comfort zone and try and achieve something totally different.

I decided I would paint a bust and figure along side each
other and I’ve really found this has helped my wondering mind when it comes to figure painting, as I don’t have time to think about what’s next because I’ve been ping ponging between the two . 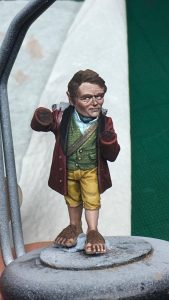 The bust I chose was the Germanic warrior by Heroes and Villains Miniatures and the figure I chose
was The spirit of adventure by Peter Punk Studios retailed by Fer Miniatures. 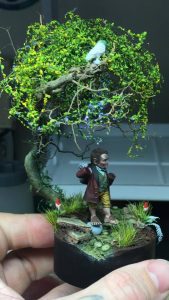 With the figure it was more complex, I’m going to have to paint textures and atmosphere, something I have not achieved before in my painting.

I am also going to have to sculpt and use water effects, something else I’m not used to doing at all . Both pieces have been enjoyable to paint and build so far and I’m having a lot of fun, which for me is what it’s all about. Stay attuned to the light side and enjoy what you’re doing 🙂 . 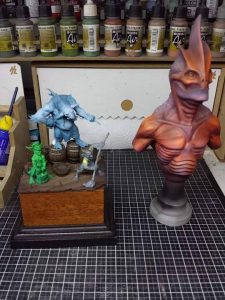 The Blacksailors figures and the Savage Forged bust are personal projects. Nothing particularly planned for either of them, just having fun.

I love the Black Sailors range, the sculpts are so cool and everyone loves Orcs right? I may adjust the composition here and there to make sure everything works but I am happy so far.

The second project will become a large diorama tutorial for the people over at FPM. I have an avid interest in nea
r future sci fi and post apocalyptic scenarios. The kits from Nuts Planet, 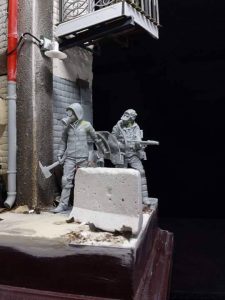 Trigger series, are wonderful and perfect for this idea!

That is it for another month folks, see you next time. Remember you can always leave a comment and let us know what you are currently working on.