The latest annual Mosonshow was held in the small Hungarian town of Mosonmagyarovar (try saying that many times very fast) during the weekend 22.4. – 23.4. 2017. Mosonmagyarovar is located in western Hungary only 70 kms from the Vienna airport Schwechat. The Finnish team was this year almost 20 persons strong and as usual we had arranged a pick up by Hungarian taxi service to Mosonmagyarovar. The return trip cost only 27 euros per person. Moson is also connected to Vienna by train but east bound trains leave from the centre of the town and require a few changes with train and underground from the airport. 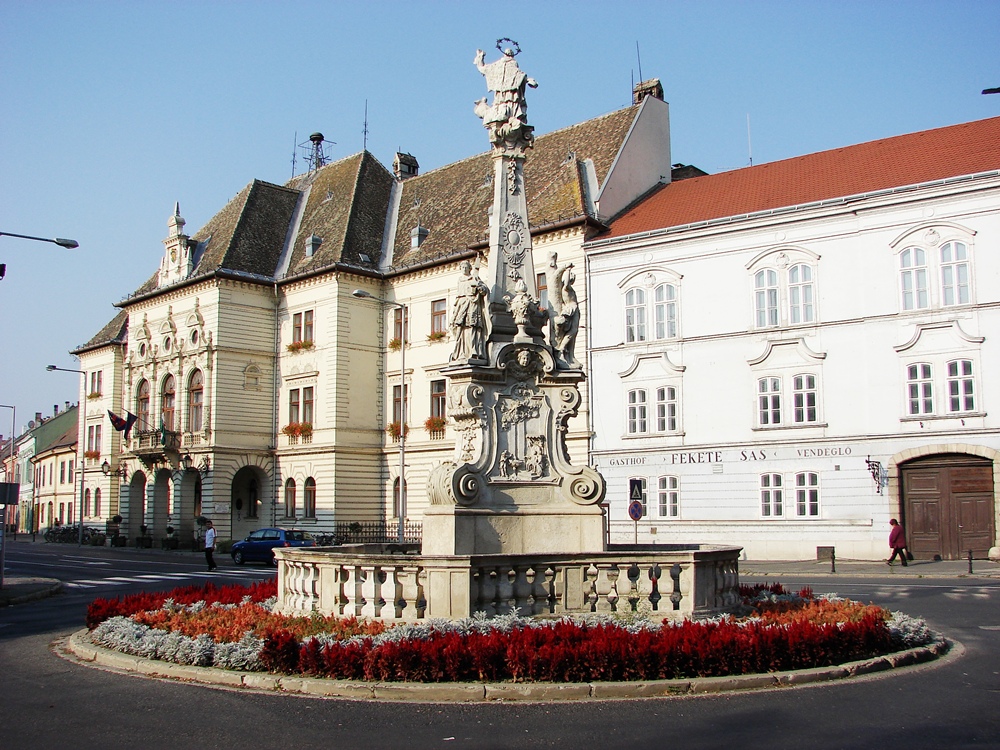 Moson is also very close to Bratislava and connected to Budapest with frequent trains. Many visitors arrived by car. The drive for example from Holland took 13 hours. The venue has limited free parking space. Moson is not a big town and the hotels were fully booked as usual. The amount of beds for visitors may be a limiting factor in the future if and when the show keeps growing. Hotels are quite affordable and offer good quality. My stay in Thermal Hotel cost 159 € for three nights with breakfast included .

A CHANGE OF VENUE

The show was relocated from the old venue, which became too small for the growing show, to a brand new sports arena. The arena was equipped with two bars serving soft drinks, beer, light snacks and also lunch. Some people missed the atmosphere of the old site, an agriculture University with cow skeletons and an aura of soviet style decor. The new venue proved to be excellent as it is spacious and well lit. Still most of the vendors were located in the adjoining high school. 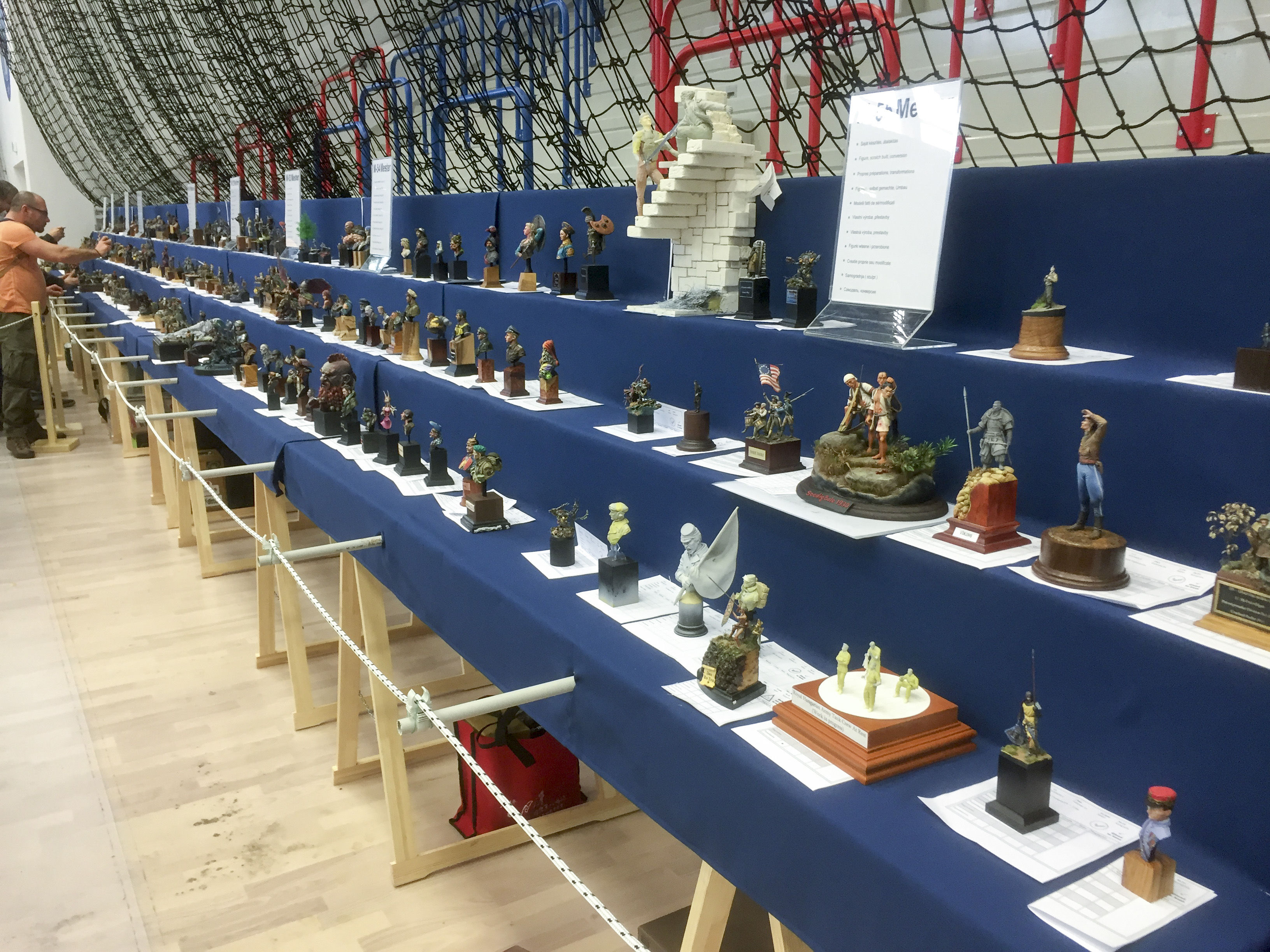 inside the venue – note the barrier and layout of the tables

No wonder as there were over 110 vendors from all branches of our modelling hobby. Particularly aimed at figure enthusiasts were Scale 75, Michael Kontraros, Tiny Leads and ReadOak Model with their 3D scanned and printed products. All major paint brands were available and Tiny Leads stand had for sale the somewhat rarer Jo Sonja brand of paints which Korean painter Man Jin Kim uses. The renowned Polish modeller Radek Pituch launched his new enterprise called Rado Miniatures with a new 1/35 German SS tanker figure. 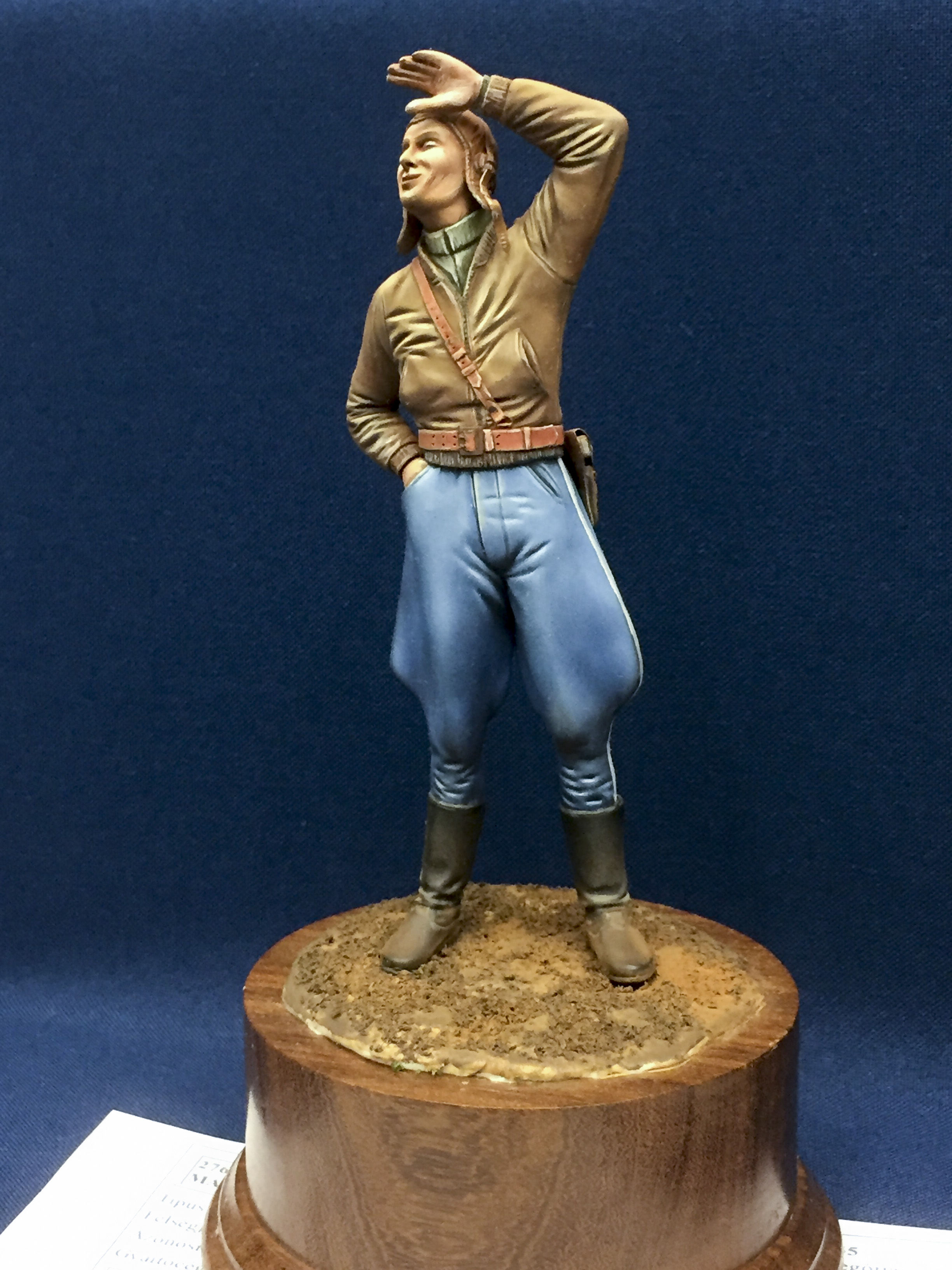 One of the author’s (Pekka Tapani Nieminen) entries

David Parker of Meng AFV Modeller magazine fame was selling his 1/16th scale Panzer crew and 1/16th scale resin engine for Panzer IV, which I bought. I was asked if I had the Trumpeter Panzer IV model too, but I plan to exhibit the engine within a maintenance scene with several mechanics, a scratch-build naturally. Several sellers specialised in diorama accessories and some very nice handmade miniature trees were available. While most vendors supplied the tank/aeroplane/boat/car customers, figure and diorama builders needs were sufficiently served.

ALL OF THE INGREDIENTS OF A GREAT SHOW

While the show opens officially on Saturday the 22nd, the venue was open from Friday the 21st between 16.00 and 18.00 and models could be entered and placed on the tables covered with black cloth. Also most vendors were doing business. For pre-registered modellers the entry fee was 4 euros and for those registered on the spot 10 euros; and you can enter as many models as you like for that fee. The show was open on Saturday from 08.00-19.00 and on Sunday 08.00-13.00 but you can enter 07.00 on Sunday to take photographs without the crowds. Actually, there can be a large audience which was causing some congestion as the entry to the show is free and the locals seem to enjoy it. By Saturday noon when the registration closed the tables were overflowing with all kinds of miniature wonders. Below is Part 1 of the figure gallery!

The total amount of models entered in 2017 was over 1800, a new record naturally. There were 53 different categories to enter from children to masters. All adult classes were divided to hobby and master categories. Everybody could enter their models to master categories if wanting to compare their work at a higher level or awarded gold medal in hobby level or any prize in master level in Moson in previous years or considered master in their own country- complicated, maybe… The rules, classes etc. can be found at the organisations site mosonshow.hu. Here is part 2 of the figure gallery.

The Moson show has always been a all-round show, but for example, aeroplane modelling has always been at very high standard. Also dioramas and tanks have been of the highest quality. The figure classes have been gaining more and more entries and indeed the quality has got much better over the years too. The organisers have invited some very famous figure modellers and painters during the few last years which has elevated the figure classes further.

This year workshops were given by Radek Pituch, Bernhard Lustig, Andrew Argent and Douglas Lee for dioramas. Kirill Vladimirovich Kanaev, Man Jin Kim and Anna Shestakova for figures. Michael Rinaldi from USA gave a workshop on AFVs. The Master classes were judged by Kirill Kanaev, Anna Shestakova and Alex Varela. They did a very good job, the attention to detail in their respective roles was particularly evident. The following is a gallery of predominantly military figures and vehicles.

The figures had a three tier presentation system which gave a good view of the figures to the audience. While the other classes were situated on tables set on square position with space for the judges in the centre, the judges in figure classes had no other option but stand between the viewing audience and the exhibits. This situation was compounded by a rope to keep away the rowdy masses, but this is standard for example in the defunct Euromilitaire (now reinvented as the Euro Miniature Expo) and other shows. My take on the figures was therefore quite short and I didn’t have as long to photograph and scrutinise them as I would have liked. Overall, a very high standard was seen in all classes and I was impressed by the artistry shown. 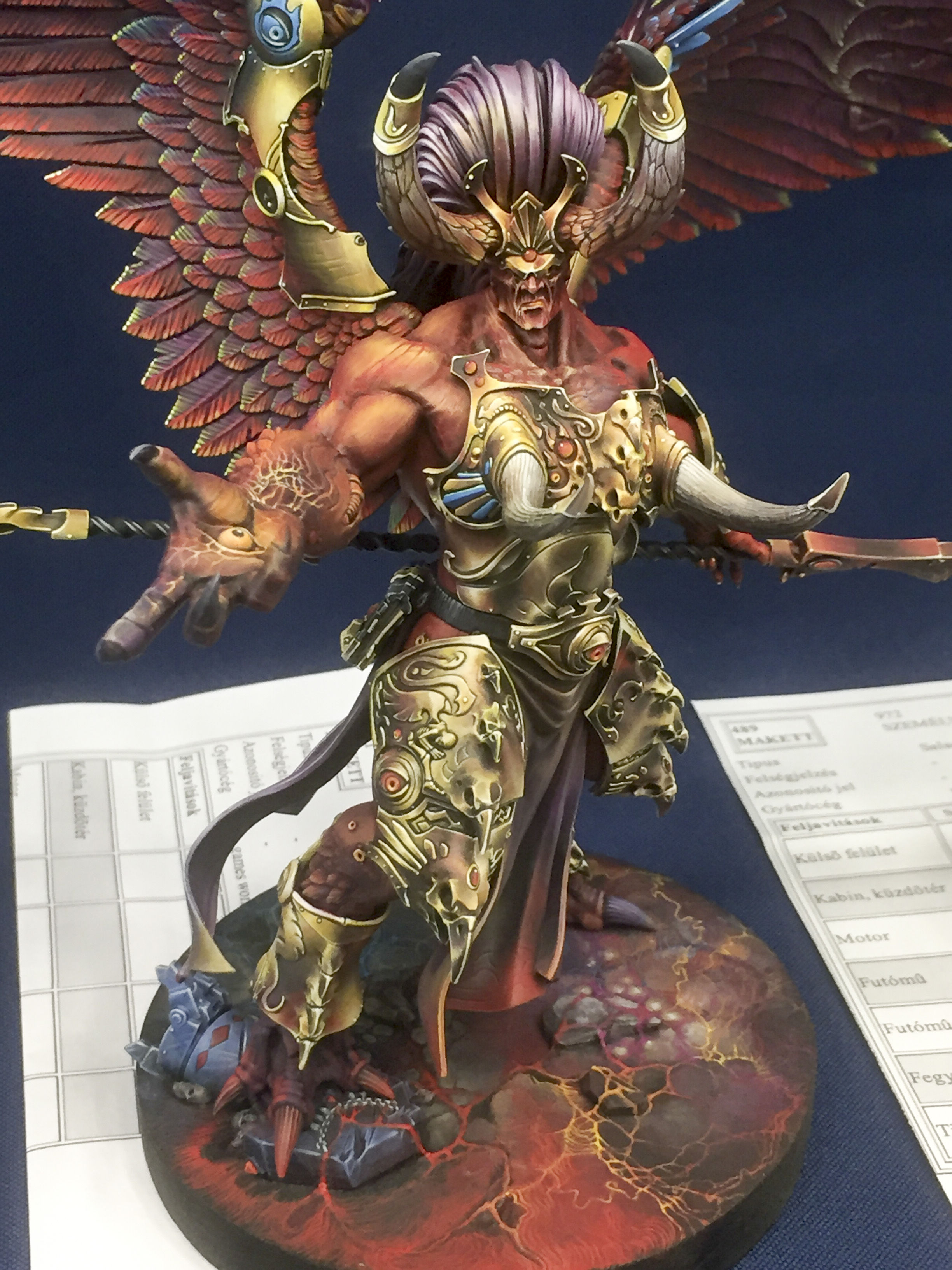 The overall Best of Show set quite a few new benchmarks

Some that particularly caught my eye were the 1/72 scale Austro-Hungarian soldiers from WWI, also produced in resin by Black Army Models from Hungary, some great busts and also previously largely absent scifi models. This year the Best of Show was a wonderful entry by Katarzyna Gorska, a lady from Krakow, Poland. First BoS in Moson for a figure entry, scifi entry and a lady modeller!!! Excellent result. I let the photos tell the further story. 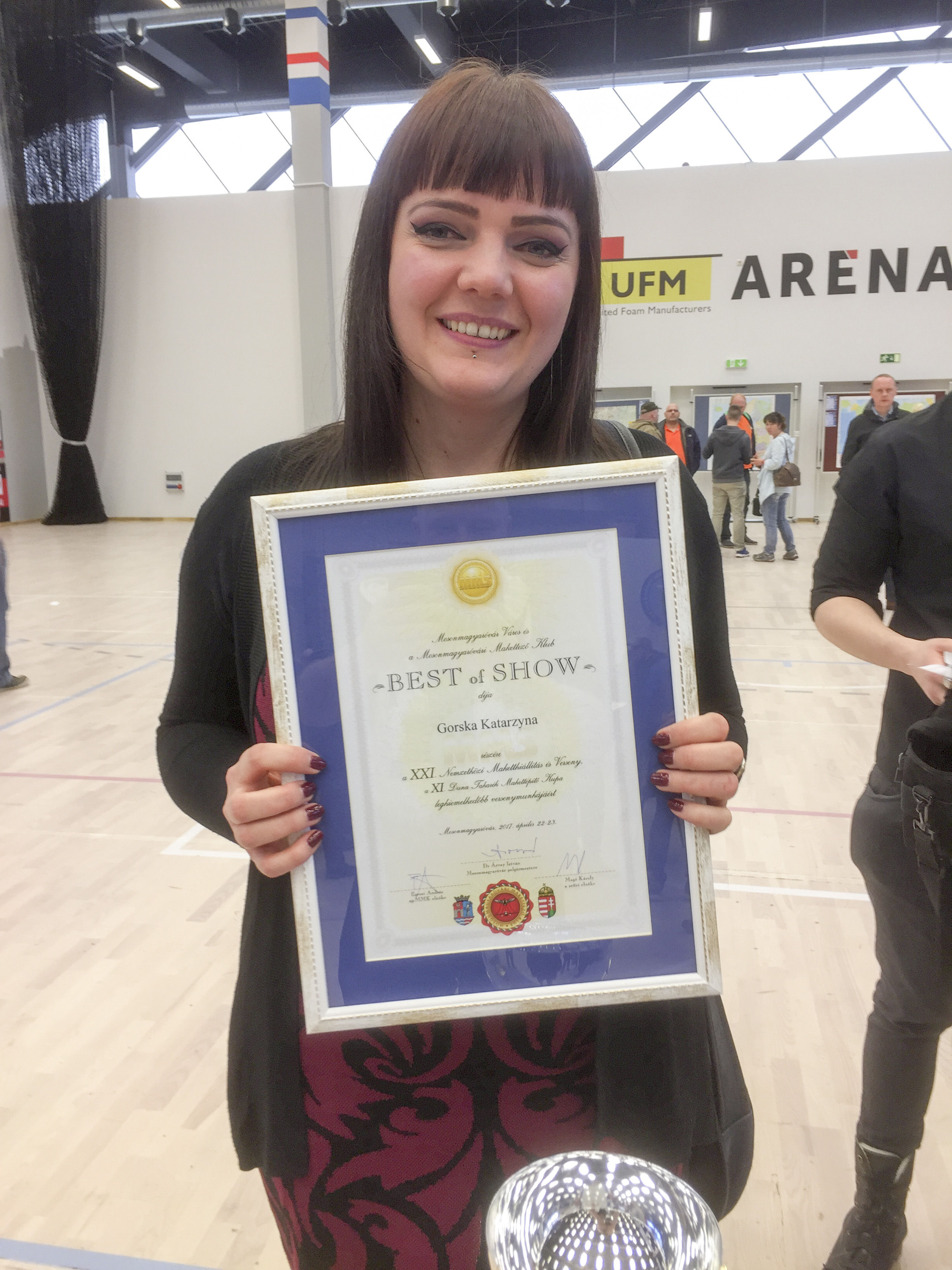 This year the organisation started to dismantle the show already just past noon on Sunday. This came as a suprise to many as the official program stated 13.00. The models were handed over to their owners in exchange for the receipt given when registrating the models. Very efficiently the crew dismantled the tables and constructed a platform where some dignitaries would sit. A brass band played, chairs were set up and the awards ceremony was started… and took over three hours. Not bad as the bars were open but that is the negative effect of having so many classes and all medals given personally, but also a positive event as one could observe the joy of medal recipients. While I write this no official award lists etc.have been published on the official site but they should appear later. Below we have the gallery of busts!

All in all again the weekend in Mosonmagyarovar and Mosonshow was a success. The models in the show were actully too many to register properly and their quality again fantastic. The evenings in the Korzo restaurant were loud, fun and also informative as many interesting conversations were enjoyed. I can wholeheartedly recommend the Mosonshow as it´s one of the premier shows in the world right now, well organised but very friendly atmosphere. Hungary is very good travel destination; drink, food and hotel accommodation are very affordable. 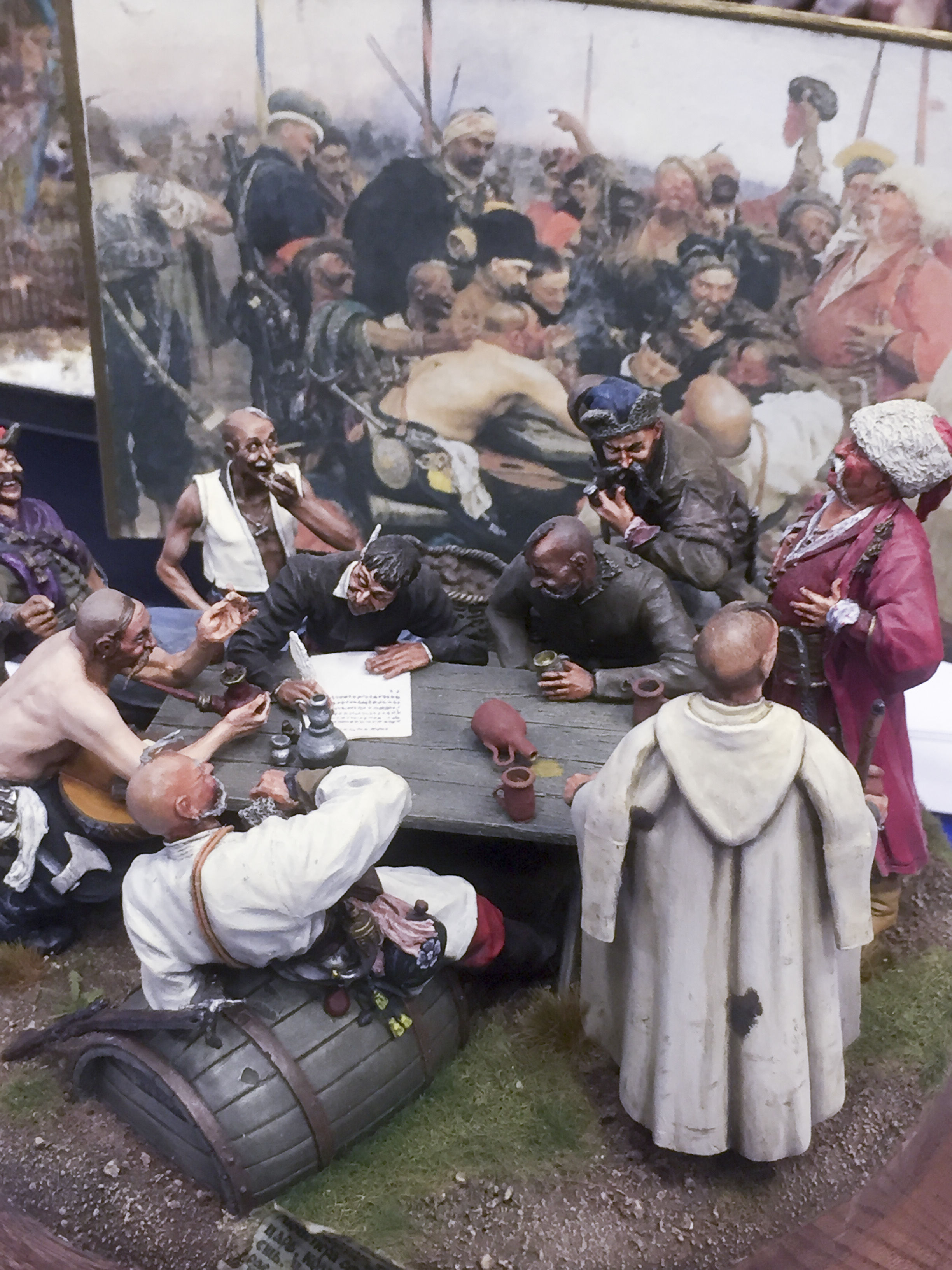 And how did the Finnish Team succeed? Quite well, actually. Five golds, four silvers, six bronze medals, Michael Rinaldi Best Weathered Model award and for some, the most important prize; Last Man Standing award was given to Leepu Lindeman. I would like to offer a thank you to Jay aka Redrum for the opportunity to collaborate with this site and I hope you enjoyed reading my musings and looking at some of the many images I took over the weekend, Cheers!