How to begin a write up about Massive Voodoo Private Coaching and Classes? Well GOOOOOOOOOD MORNING, FIGUREMENTORS!

Hey, can you tell me, what’s your name?

“My name is Richard Sharp.”

Richard, what town are you stationed in?

“I’m stationed in Augsburg, Germany at Massive Voodoo for a week.”

Well, thank you, Richard. What’s the weather like out there?

“It’s hot! Damn hot! Real hot! Hottest thing is my shorts. I could cook things in it. A little crotch pot cooking.”

“Fool, it’s hot! I told you again! Were you born on the sun? It’s damn hot! It’s so damn hot, I saw little miniatures, the metal, resin and plastic burst into flames. I saw Roman Lappat with a wet towel on his head. It’s that hot! Do you know what I’m talking about?”

What do you think it’s going to be like tonight?

“It’s gonna be hot and wet! That’s nice if you’re with a lady, but ain’t no good if you’re in the Massive Voodoo jungle!”

This little reference to the classic Robin Williams comedy, Good Morning Vietnam, really explains the environmental experience at Massive Voodoo in July 2018. I spent a week of my annual leave with Roman Lappat, at both the beginner’s course as well as 2 days private coaching at the Massive Voodoo studio. It was hot, damned hot, but so rewarding and enjoyable. 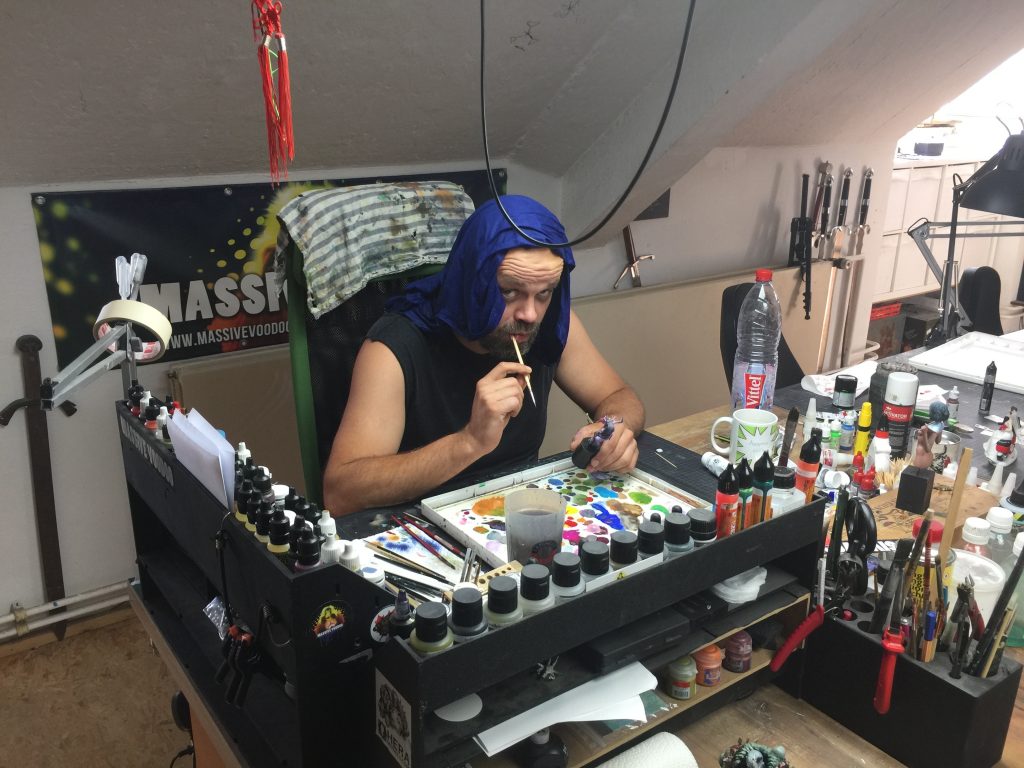 In this article regarding Massive Voodoo Private Coaching and Classes, I will briefly outline my experience with the beginner’s course but place more focus on the private coaching, including what I wanted to achieve and how Roman helped me realise my vision.

Now, for those that don’t know me, I am from Melbourne, Australia. I have recently relocated to France, so I am sucking the marrow from the bone and trying to visit as many painters, sculptors and shows as possible before I return to Australia in a few years. I have painted Games Workshop 28mm miniatures to desktop standard on and off for a while but in the last 2 years turned my attention to painting busts and 75mm scale miniatures for display. This has become an obsession, with me painting whenever and whereever I can get a chance!

My secondary problem has been how do I realise the many ideas and visions I have for what I call, ‘creative in miniature?’ My foundational background is art and design, but I haven’t flexed those muscles for approx. 20 years, more focusing on business pursuits. So, call it a mid-life crisis but I am very much enjoying rekindling my love of art and design through miniature display painting. With this in mind, Roman Lappat is not only the perfect teacher with codified lessons on a wide variety of topics but he is the perfect teacher for someone of my ilk.

We built a GW 28mm daemonette on a small plinth. Below is an SBS of my progression. Now I will admit that I raced through this course, spending a disproportionate time on the couch! Partly because I visited Augsburg in 2017 for Roman’s basing class and partly because of my background.

The beginner’s course was a great experience however, as explained before I have built and painted 28mm miniatures and have an art and design background, so colour theory is not an unknown. Although, I wanted to experience the class as a contextual link into the private coaching and understand the answer to my first objective; what does good look like in the miniature world? This was a great experience in putting colour theory and composition in the context of miniatures. Although related to other art mediums, there are nuanced topics needing inclusion, such as (but not limited to) the need to, 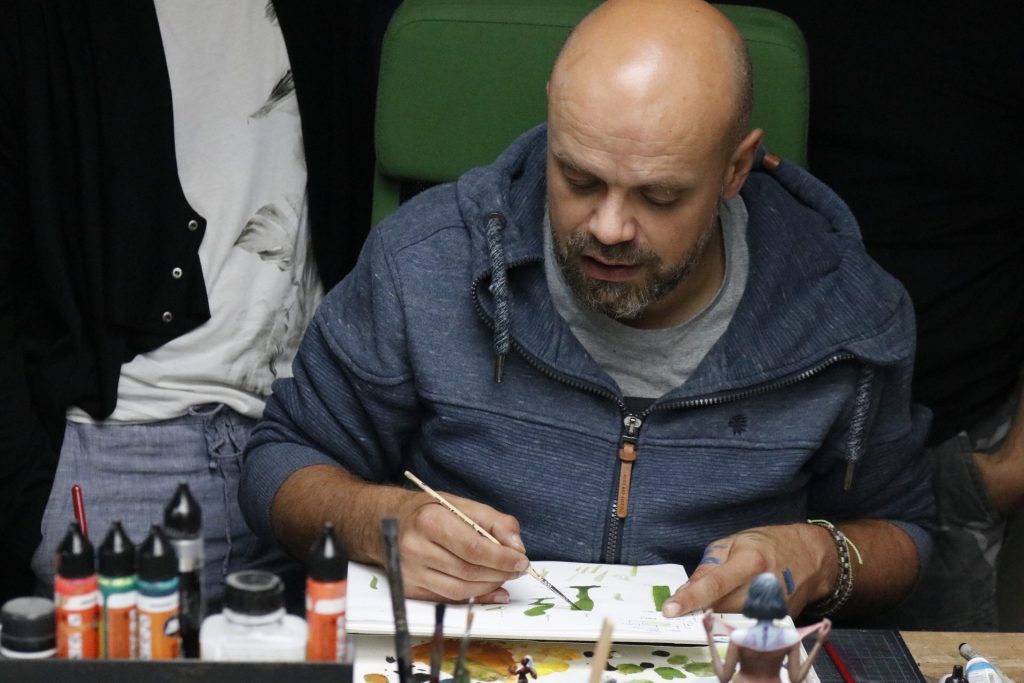 Roman explaining the theory in application

Roman teaches all these topics in his class but what does this mean to me specifically? The best way for me to illustrate this is visually. However, let’s start off with defining my problem statement that the beginner course reinforced and drove home:

As a painter I had been painting hues and tints with no problems. I had a session with Jérémie Bonamant Teboul from Figone a few months ago where my objective was to understand his style and push my understanding of the use of white for contrast. So, I now had a good basis in tints. I understood colour harmonies but what I was afraid to do was work with tones or shades to really push the dark side of contrast. So basically, I was stuck in the middle. I was producing pleasing work but not really pushing the boundaries of what I could and probably should be doing.

Roman’s first comment in his one on one coaching with me succinctly reinforced this based on his observation of my past work. Tough critique, but not wrong, and exactly what I needed. The following diagram illustrates my progress in applying colour theory concepts as taught by Jérémie (one on one coaching) and Roman (beginners’ class and one on one coaching). 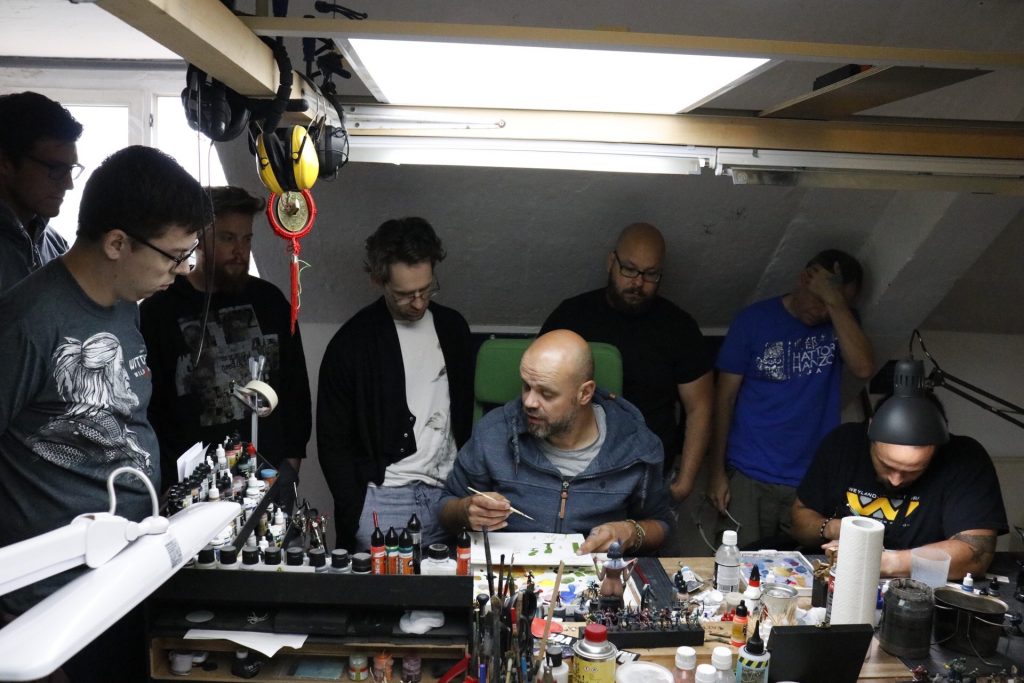 Now we move onto the one on one coaching session with Roman. What can I say, I am of the belief that if you’re going to do something, go hard or go home! You will see what I mean in a second!

I discussed some objectives with Roman including:

I chose Karol Rudyk’s Draco the Impaler as my bust. Now, poor Roman was a little concerned of my ability to progress through his planned approach to teaching because it is a big bust! Really big! 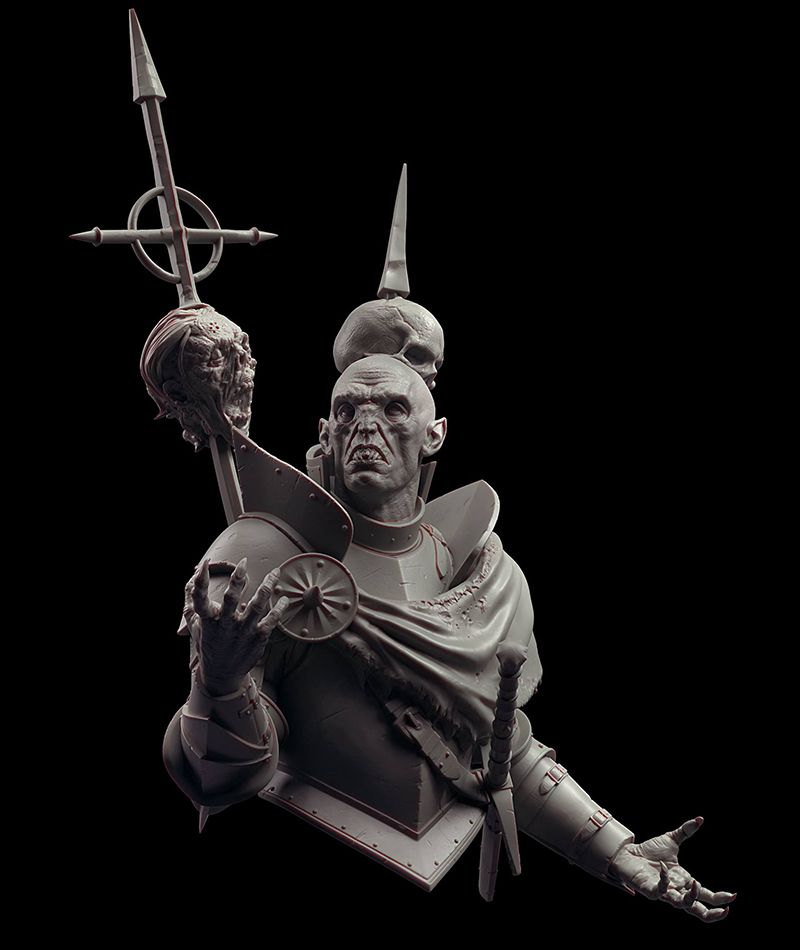 Specifically, Roman was worried about the time to paint. But seeing me operate in the beginner class, he understood that I can paint fast and have generally a good understanding and ability to apply what I know and have learnt. So being the typical Aussie that I am, I probably bit off more than I could chew, but I chewed fast! I wouldn’t recommend choosing such a big bust to anyone who may be considering private coaching though. Be a little more modest than me. Spend more time talking with Roman than madly painting and applying what he is teaching you!

Anyway, I digress. Next up Roman asked me what the story was. My explanation was, I wanted to capture Vlad the Impaler at the moment he realises the terrible bargain he has made. He has transformed into the vampire as dusk settles but as the sun dips under the horizon he realises he will never see it again or feel its warmth. He sheds his last tear as his humanity and soul slips into the demon he becomes as Dracula. I thought Karol Rudyk’s sculpt was perfect for this, particularly because of its almost Shakespearean pose.

I was inspired by a great photo by tomedgerry on Instagram of Lyon at dusk. It is just spectacular and is a perfect environment for me to realise what I was calling “First night. Last light.” 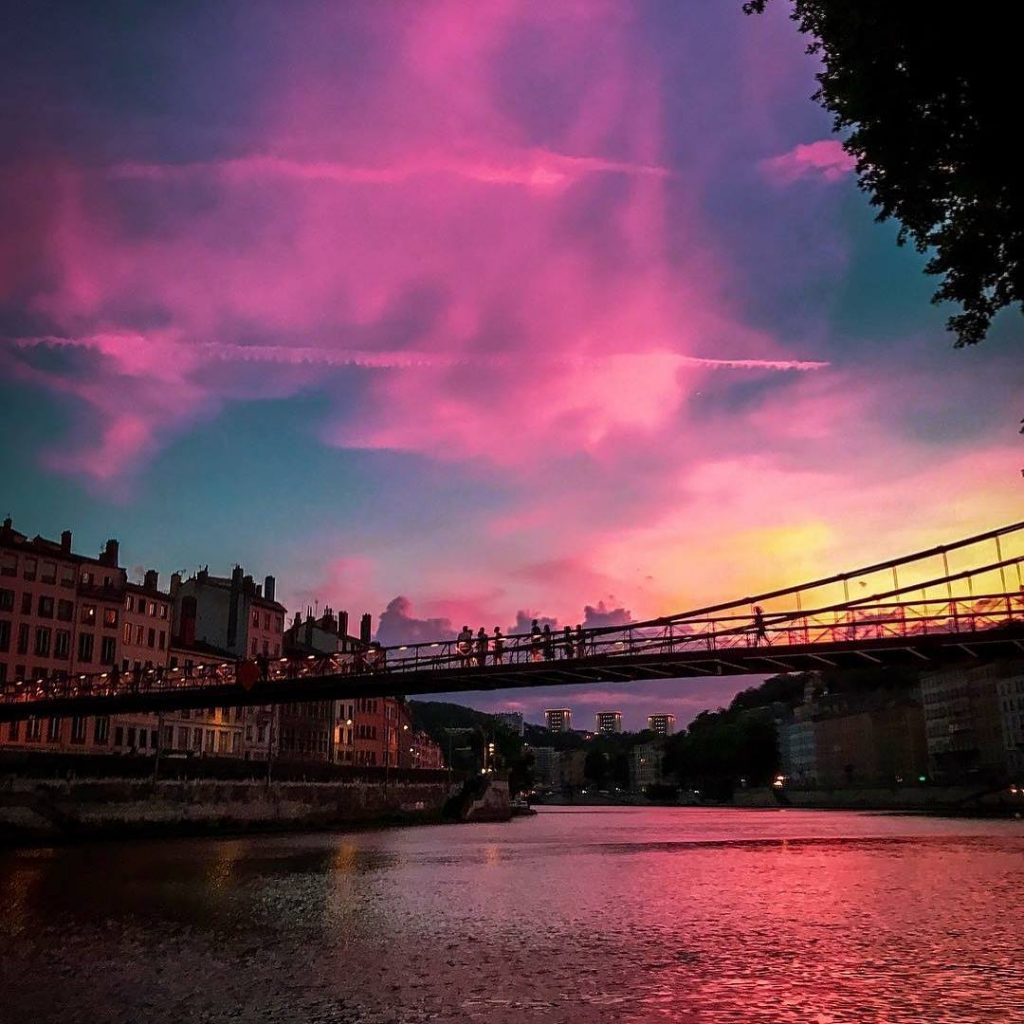 To begin with I took a photo of the bust with a black primer coat to understand the view on main light source.

Then Roman took me through a process of mapping out the plan and then sketching texture using the grisaille method of painting in colour to build out the volumes.

This went on for a while… but I chewed fast! As I said, it is a big bust!!! Finally, I had arrived at a place where I was happy with the contrast on his flesh. But I was still missing the 3-4 light sources!

Now I am going to fast forward a little. This was the moment that Roman kept pushing me towards where my vision would start to be realised. Suffice to say it was an ‘aha’ moment. Where I did think, “wow! How simple!” But this is a mistake people often make. Simplicity takes experience and is very hard to create if you don’t have that experience. I just didn’t have that experience. Whereas Roman did and guided me through the process clearly.

At this stage, we were nearing the end of the 2-day session, but Roman wanted to push me further. He said some people might stop there but he felt I was only half way done! So, he pushed me a little further to where I ended up in the below photo. We posed for the obligatory Massive Voodoo photo and back to France I went! A little frazzled but totally inspired! 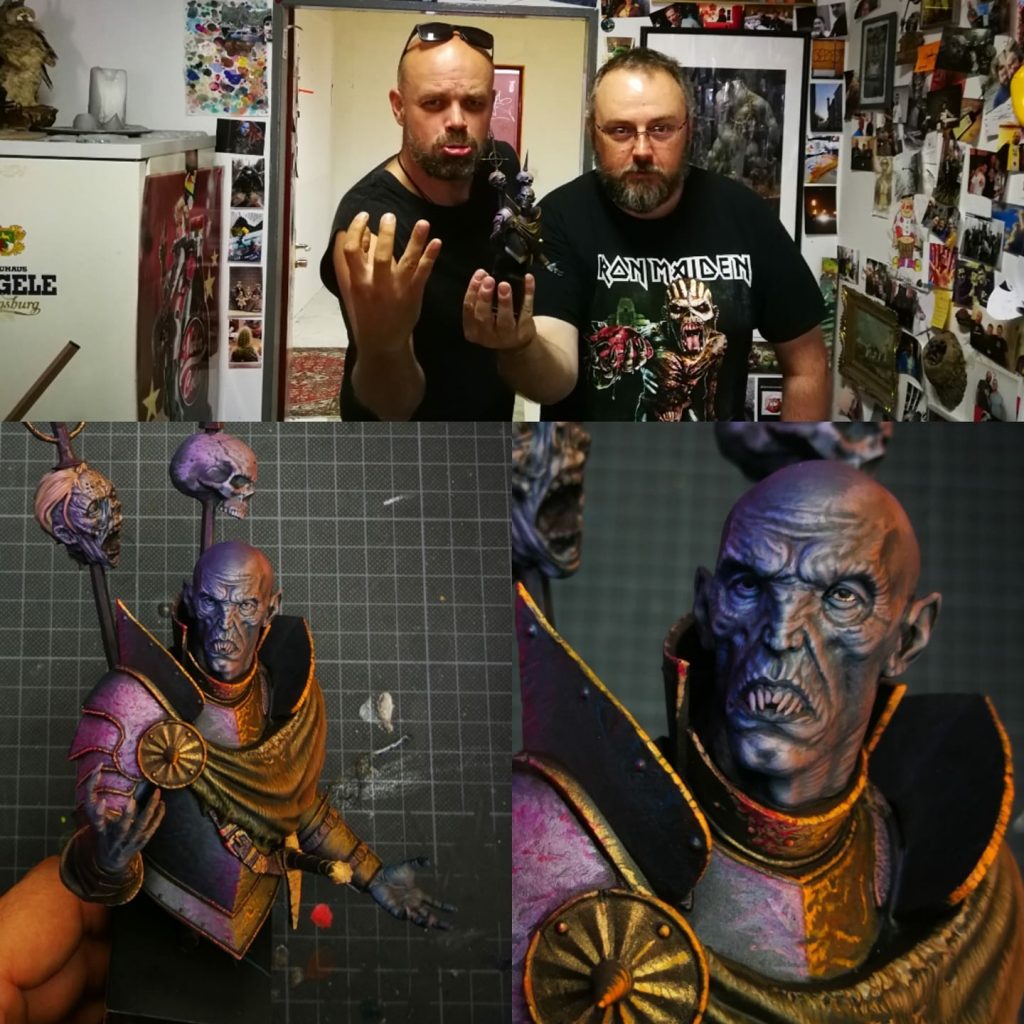 Upon returning to France I spent another approx. 24 hours in total on the bust applying Roman’s teachings and guidance. I believe I finished with a lot of more nuanced detail and vibrancy to reflect the intent I wanted and the source material and story I wanted to communicate.

My week at Massive Voodoo is one I will not forget. I forgot to mention it was also Roman’s birthday on the first day of coaching, so we caked it up and enjoyed many beers. Australian’s and beer have a fond relationship, so I was very happy!

I am really proud of the result of the coaching. I couldn’t have done it by myself. I have been getting comments from friends back home that my painting has improved massively in the last 6 months. I credit this, in particular to Roman, as well as Jérémie and other painters I have met since living in France. Meg Maples was my first miniature painting teacher nearly 18 months ago in Australia. She is a big advocate for learning from and crediting others. It has Meg who told me to reach out to Roman and Jérémie. I am so happy I did. They are different in their approach but the benefit in seeing how people approach and execute what they set out to achieve cannot be understated. It is challenging, humbling and such a wonderful experience. 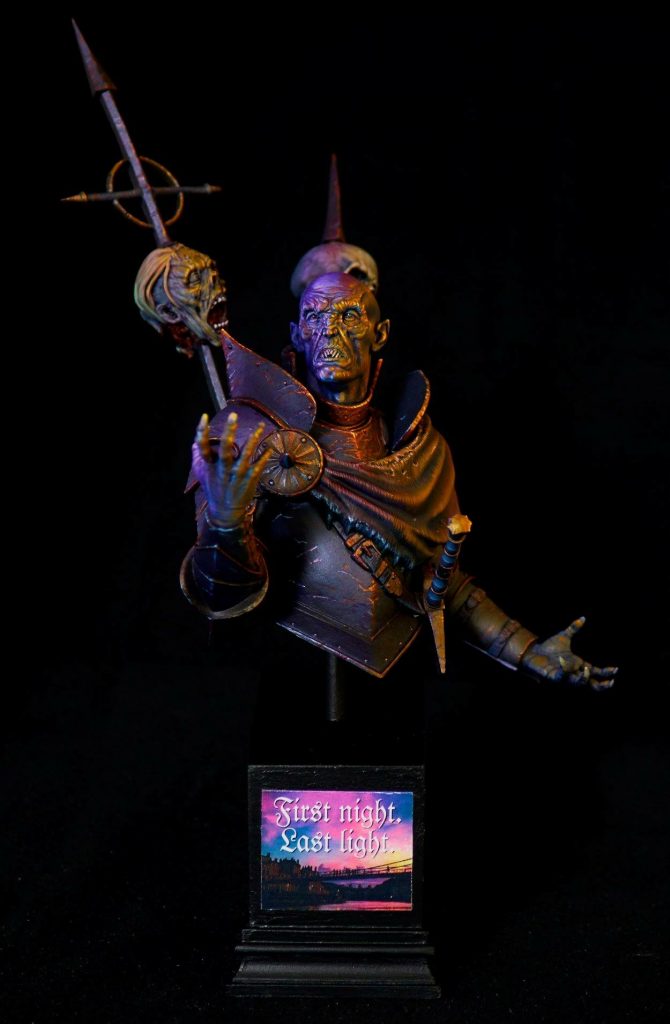 I really look forward to continuing my journey as well as seeing all of the friends I have made in my last 12 months in Europe. If you have a chance to spend time with Roman at Massive Voodoo for his regular courses or even private coaching do so. You will not regret it. More information on Roman’s regular classes can be found at:

I will leave my contribution here. Normally I wouldn’t do a write up because painting has always been such a private thing for me. However, my experience in the last 18 months with Meg, Jérémie and Roman has made me rethink this. All three people have been very generous with their time, knowledge and experience. I know this started as an article on my experience with Roman’s beginner class and one on one coaching, but I had to include the background context on Jérémie and Meg. I am a big believer in the academic principle of “we stand on the shoulders of the giants before us” meaning we give credit to those who guided, informed and helped us and who went before us. Thanks Roman, Jérémie and Meg. You have broad shoulders that can help painters of all skill levels.