Marcus is one of the most recent releases from Siren Miniatures and also one of my favourites, you know you’re going to get something pretty original when they design a new figure. This is a five piece, polyurethane resin kit and it arrived in their now customary blister pack adorned with the concept sketch. The parts are nestled between layers of foam and comes with a round gaming base. Siren Miniatures have long been the beacon for producing gaming figures that also easily appeal to the competition level painter, in part due to their original designs and intricate detailing.

I grabbed the opportunity to speak with Daniel Kalaska regarding this stocky troll and here is what he had to say. “I really wanted to do create a troll miniature. The easiest way would have been to produce something that people would easily use in any game. It means dumb, clumsy or savage look with big belly, long arms with big hands, scales, bone, hammer or club in the hand. The most generic and safe approach. Yeah… but everyone that knows our range and me would know by now that this is not what we do or like. There is nothing wrong with classic generic fantasy it is just not our cup of tea. 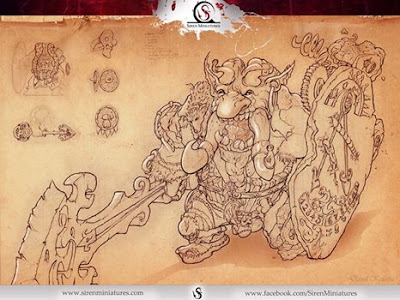 So I had this idea with the clock as a shield and weapon. Than I devised some background story and some interesting elements to support it. Marcus was part of the Circus freak show. He was captured when he was young and every hour or two people would come to visit him.They wanted to see the beast, the abomination. The circus was close to the town clock so every hour, bells reminded him about his suffering. He hated that clock so much. When you look at the mini, you will se that there is a CIRCUS sign at his back and clown masks suggesting that this “business” is over, it is a symbolism to a past life.

He was treated like an animal, there are cow bells on his horns and cuffs on his hands and legs. Marcus is not dumb but he is a big guy so he used what he could to protect himself.You can find some funny elements like barrel armor around his belly. This barrel has got even small crane on the front, there is also this sad fox on his shoulder who holds the strap and two low hanging pouches…yes, they are there on purpose. I also didn’t want to make classic clock. Why all people in my fantasy world would use the same time measurement?

So lets make it ornate, fancy, cosmic ect. Every time when you design minis you have to remember about the scale and space,you will have to apply your ideas. This time I had it so why not go crazy. By far this is one of my favorite mini we have produced, a lot of character and (in my opinion) good execution.

One more thing. Mini is not “tall”, but he is really chunky. Remember that when you look at the scale measurement”.

Lets begin by mentioning the cast, its flawless. I have spoken at length with the guys and what comes across is an unflinching desire to create the perfect figure, no excuses, no substitutes. An almost perfect sculpt or cast is not acceptable. I do not mean this in an egotistical manner, far from it, they’re very humble about what they are doing, it is more that they want to deliver the very best product for their fan-base and this means exacting standards. 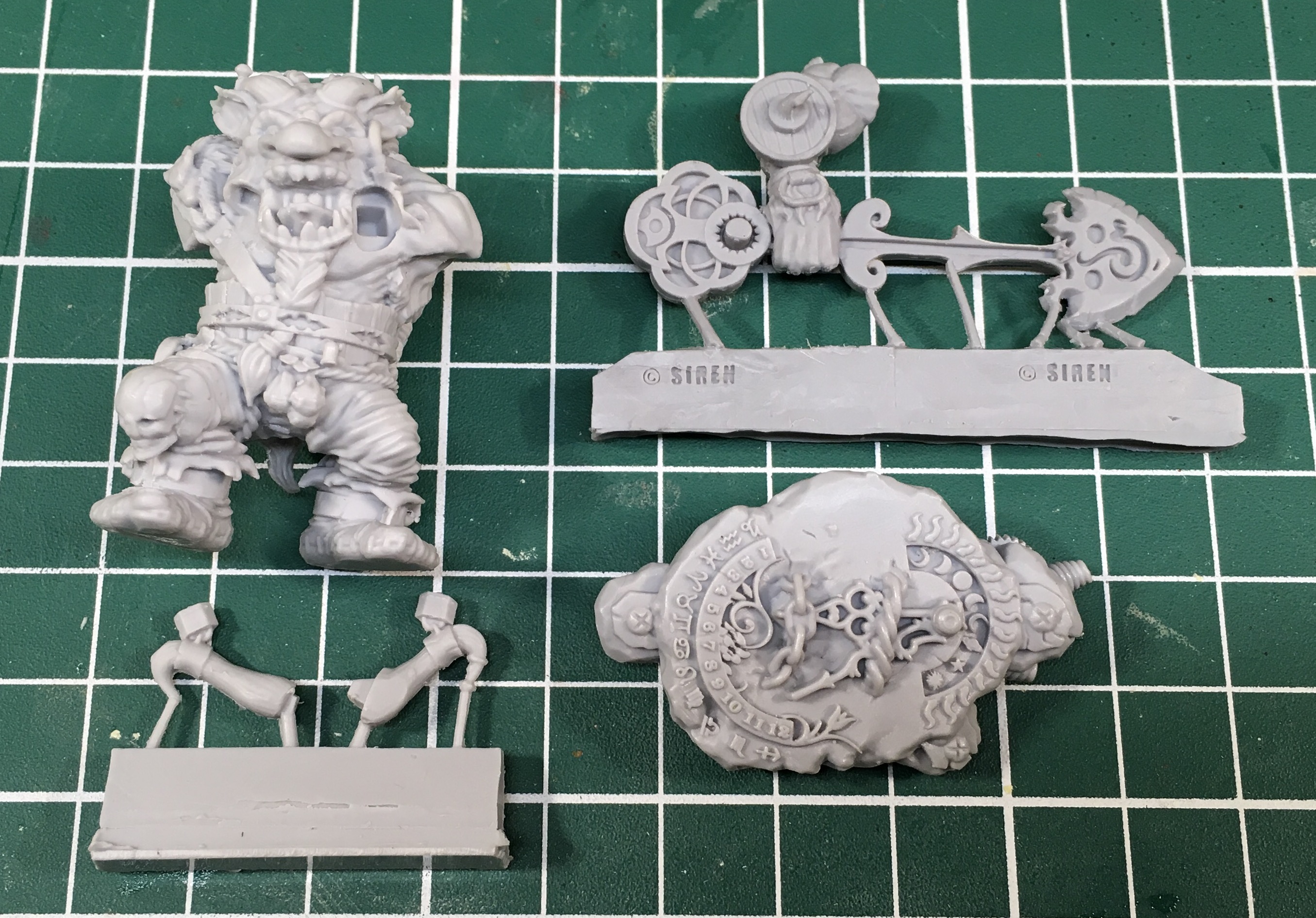 The kit is sculpted predominantly in one piece with just the arms and horns that need attaching. Marcus is full of detailing, rather short at 41mm but incredibly bulky, even without being told about his background there is a definite circus freak feel to his anatomy, the hooded eye brows, the bulbous nose, the details mentioned by Daniel are all nice visual clues to his persona. He has a broad and squat silhouette, legs shoulder width apart with the right slightly forward. The braided hair is perfectly rendered, swept back over the skull and down the back, framing the circus icon. 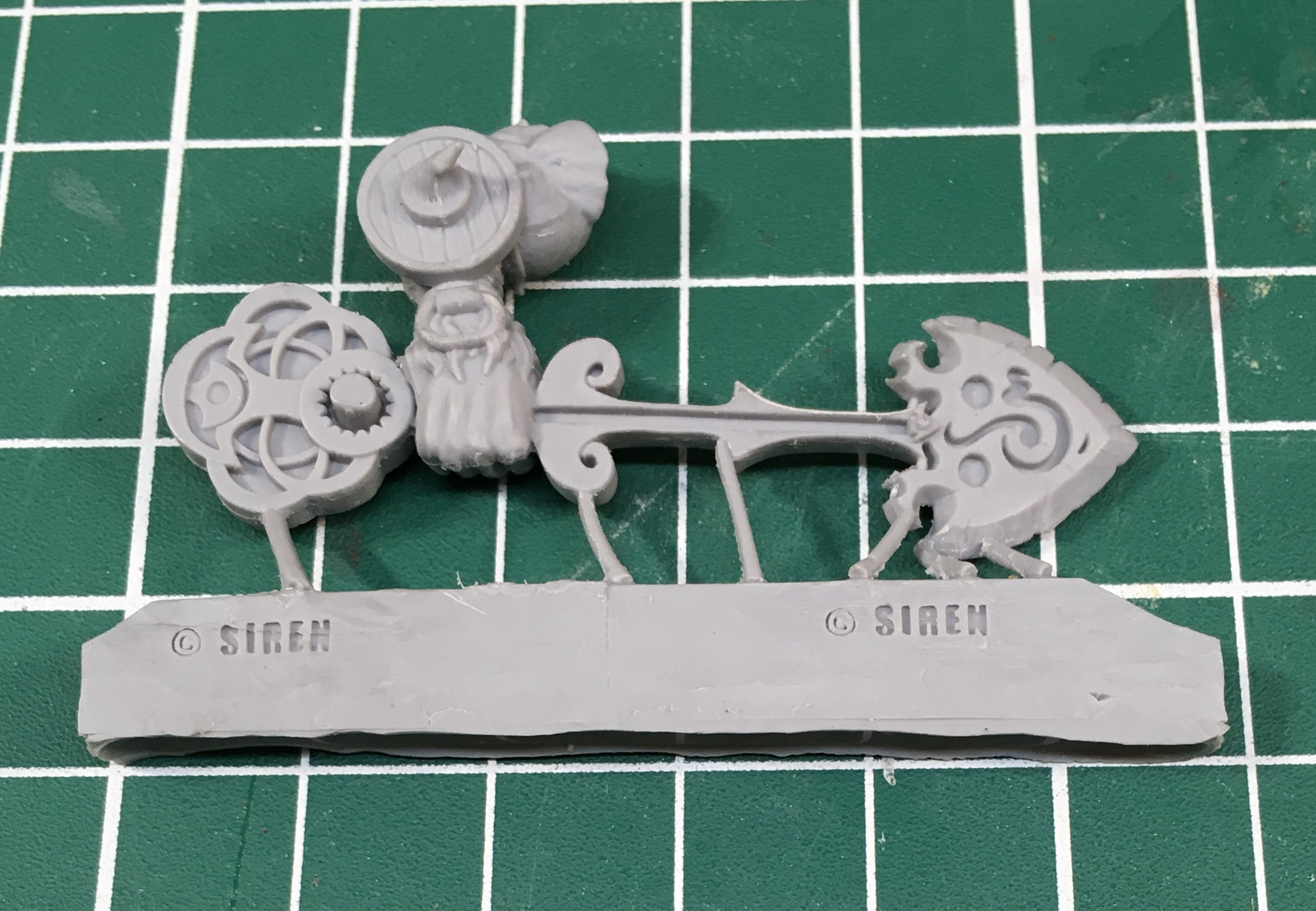 There is a wealth of detailing and textures with sharp undercuts present throughout. The barrel armour is a comedic touch and perfectly rendered once more, whilst the trousers show deep folds and creases with another facemask acting as rudimentary armour to the knee. Our ogre certainly took advantage of his surroundings when he armed himself before setting off and leaving the cruel Circus life behind him. I like the crude and bulky, stitched moccasins complete with holes for ugly toes to poke through. The two horns fir via hole and peg assembly and complete his rather aggressive facial features.

Let’s now take a look at that incredible sword and shield. Firstly the fit of both arms is absolutely perfect with no need for any gap filling whatsoever! The “sword” is incredibly stylised with circular/cog motif pommel, an extravagant length to the blade with an engraved, shovel headed point. I could imagine this starting life as the counter weight in some grandfather clock, perhaps another nod towards his earlier, uglier life and the fear of the bell that rang out all around him. The shield resembles a chunk of granite or stone, again the iconography of clock mechanisms is present and on the forward facing side we have even more detailing, both engraved and embossed. 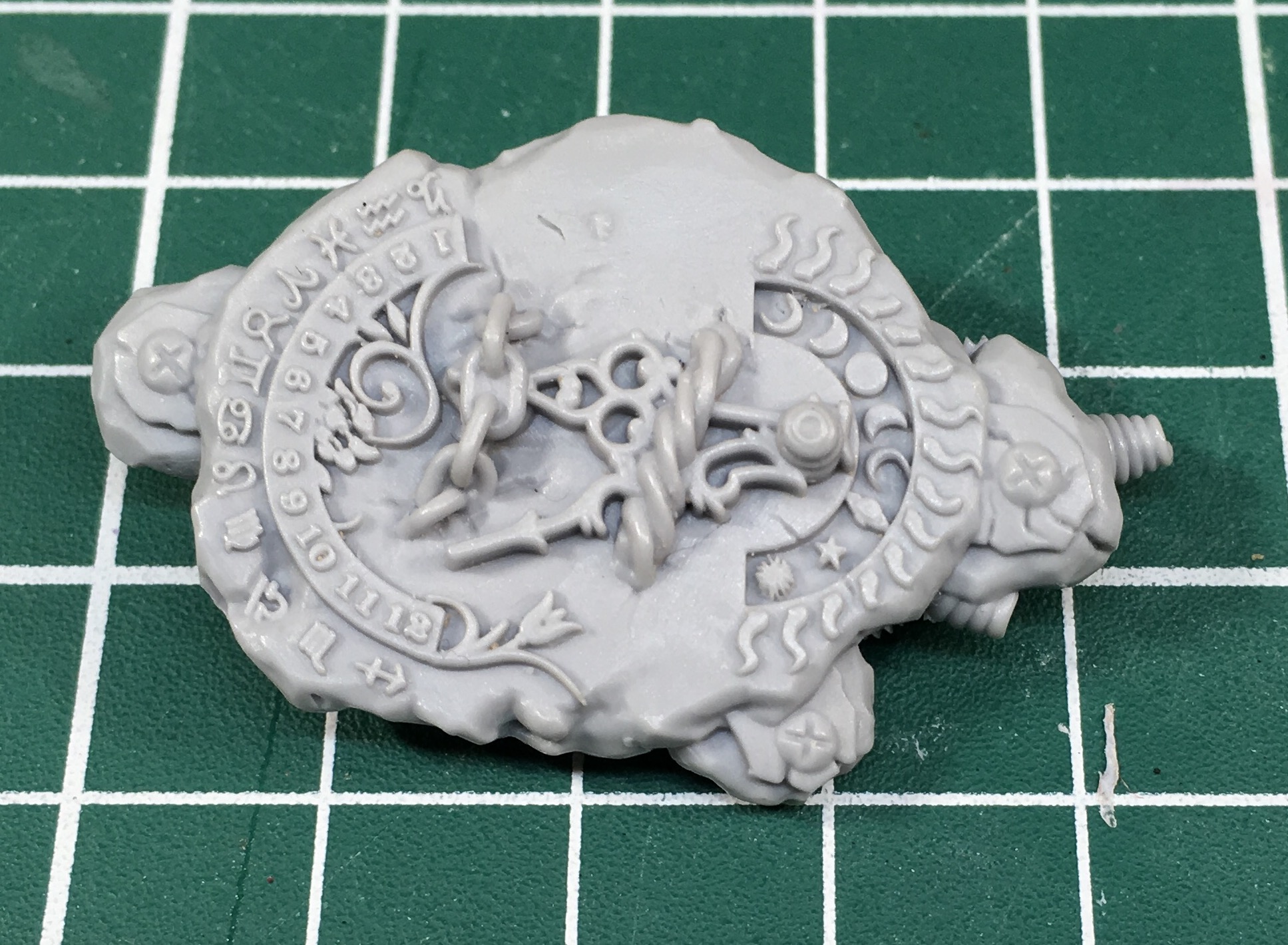 I remember reviewing some of their very first Miniatures maybe three years ago and I feel very much part of the Siren family, having also met them at Salute in 2016 and our regular chats online. What has struck me from the very beginning is their original design and concepts. In a small world like ours we keep bemoaning the lack of creativity and originality with everyone copying a copy of a copy of the same archetypal fantasy characters but for some reason we still eat these figures up. We are almost the catalyst in many ways for the lack of growth and development within the intellectual property of the miniature world.

Siren Miniatures are in my opinion one of only a few figure companies (I include Aradia  Miniatures in this small list), that design from scratch an original concept and walk it through to the sculpt and cast. They along with Aradia, just like in the days of Rackham, have created original Worlds, never seen before and populated them with beautiful figures. They have a clear and instantly recognisable design ethic, flowing lines, hyper stylised, unique and with sculpts and compositions heavily entrenched within certain aspects of Modern Art and it is somewhat refreshing. My only criticism is as a non gamer, whose eye sight is not all it use to be, the lack of larger scale figures prevents me from painting them for my own competition level projects.

Siren Miniatures have created quite a loyal and passionate fanbase, yet I firmly believe what makes them so original and unique is also a contributing factor to why I do not see more of their miniatures painted up. The quality of their sculpts and cast are some of the very best in our market and I have no doubts that if they made generic copies of the archetypal charctaers they would be very popular, but that is not the vision for Siren Miniatures and I salute their determination to do things their way! This will make a great piece either for the collector, gamer or the serious competitive painter.

The figure costs just over €31 and I believe is a competitive price for the quality of the item. There is a wealth of detail and volumes and textures to provide many hours of painting challenges which actually puts the price into perspective.