We’re back with another work in progress update to show you what the FigureMentors team has been up to.  We’ve also got two new team members to introduce you to: Steve Bodycomb and Giovanni Di Lena (who you may remember from the recent Black Power Armour article).  Welcome to the site, guys!

This month has been an emotional roller coaster for me but I am still standing! Project wise I managed to finish off the El Dorado bust from Broken Toad. I wanted it to be an exercise in textures and emotion, to really push the techniques I had in my armoury to create a character that that you could understand and empathise with. A veteran conquistador that had seen and done things in the name of duty that now weigh heavily on his weary shoulders. A man who has travelled the seas under the glaring sun, fighting on foreign soil and who has a sorrow in his eyes, a reflection of his soul. 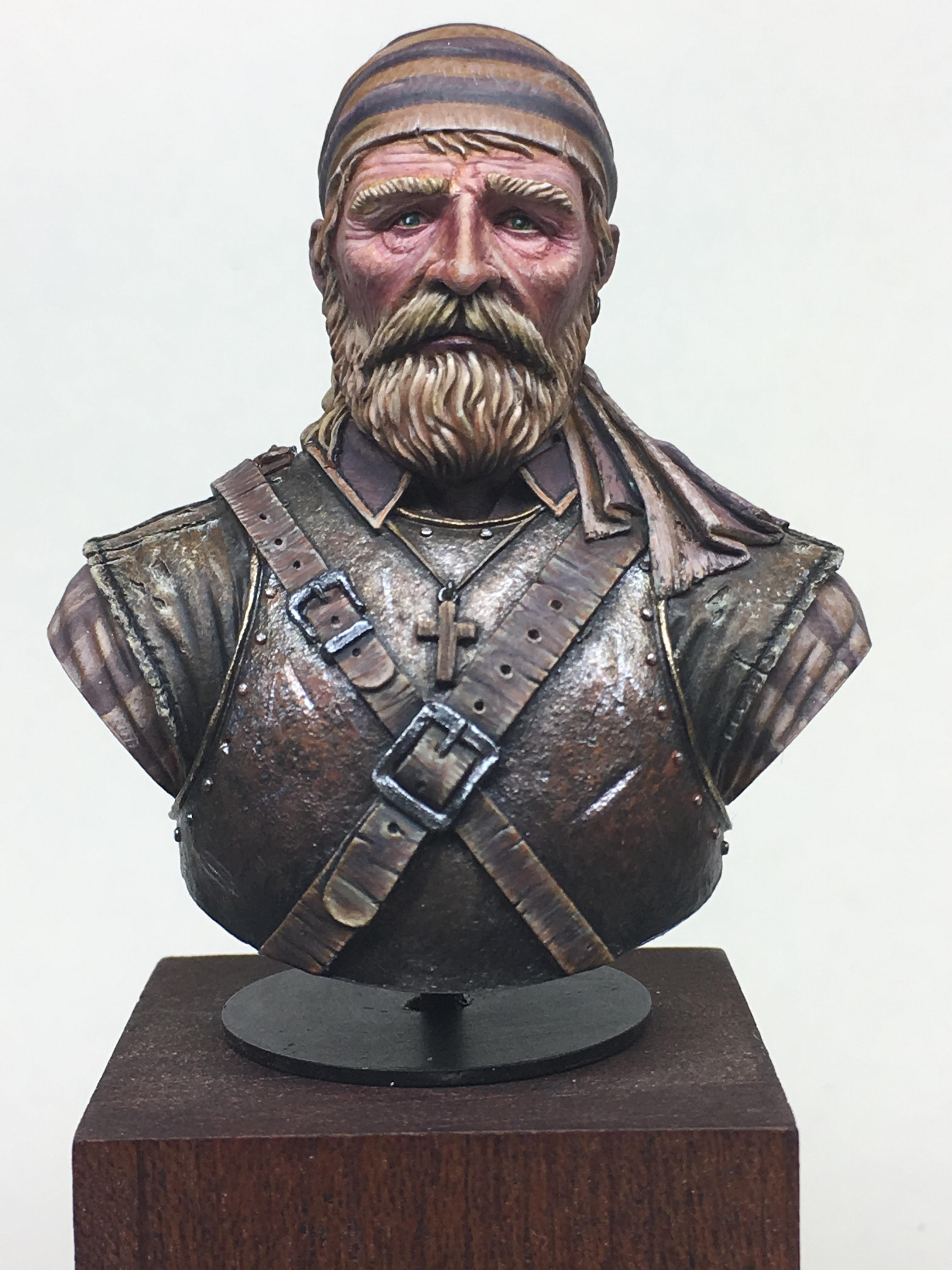 In hindsight I wish I had forced the volumes of the face more before going to work with the textures, mottling and wrinkles and I definitely need to work more on eyes in the future, but the reality is that even with an optivisor my eyes are nowhere near as good as they once were. In addition I think I should have introduced some saturation to certain colours after the texturing, so as to bring some visual interest back, as I believe some areas are now too desaturated.

I also spent some time learning some photography with help from our very own Mr Powell, Josua Lai and others. It took several tantrums and quite a few hours and although I have still only scratched the surface, I was able to get my head around some of the basics and I was quite happy with the results. 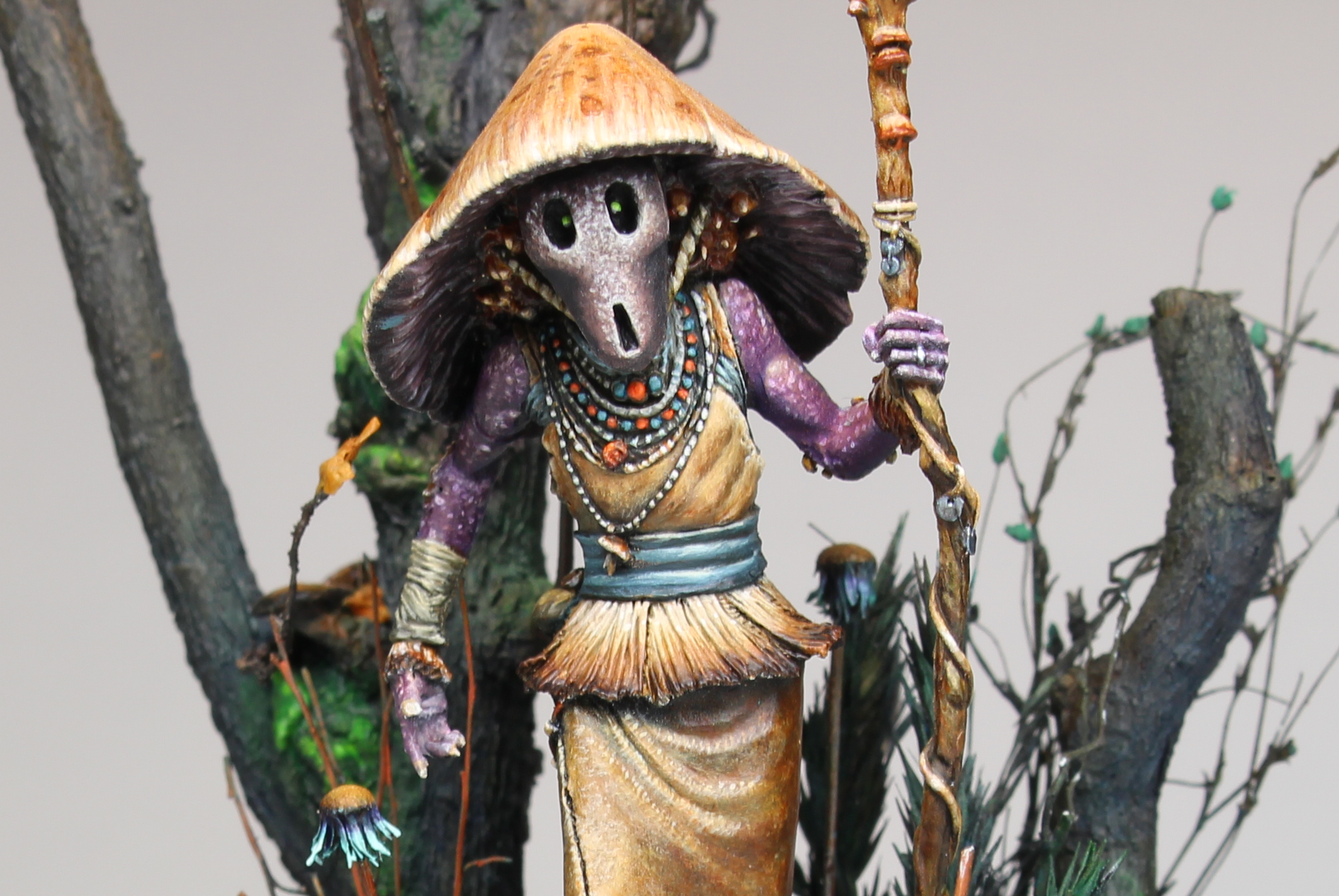 I also wrote an article for the Mushroom Shaman which I am hoping will be appearing in a near future issue of Soldatini Magazine. A lot of my work is done here with the blog and something which is now almost complete is the epic interview I have done with Alfonso Giraldes which I hope to be able to publish over the coming weeks.

This month has been a good one for me. I’ve come back to the hobby recently (we talk about last September) and my rhythm is slow, but this March I’ve been able to finish even two (!) of the warriors of my (in my dreams) Dirz warband.

I chose three guide lines for the warband: first, to keep all the eyes shiny green, as army’s  background shows, to show how unnatural is their nature. Second, the bluish tone of the NMM areas, trying to make transitions as smooth as I can, even pushing the contrasts, wherefore is proper to the technique, and last, I managed to play with purple tones in every model, to have fun while I paint a series of miniatures so similar each other.

So here are the two miniatures so far.

I’ve been working on a two different projects over the past two months.  The first is a 54mm angel figure produced by a friend of mine, Milosh.  I decided to take a different approach from the typical angelic look and instead paint her up as a fallen angel.  Gave me a chance to work with my unnatural skin mix and experiment with painting black more (which would come in handy with project #2…). 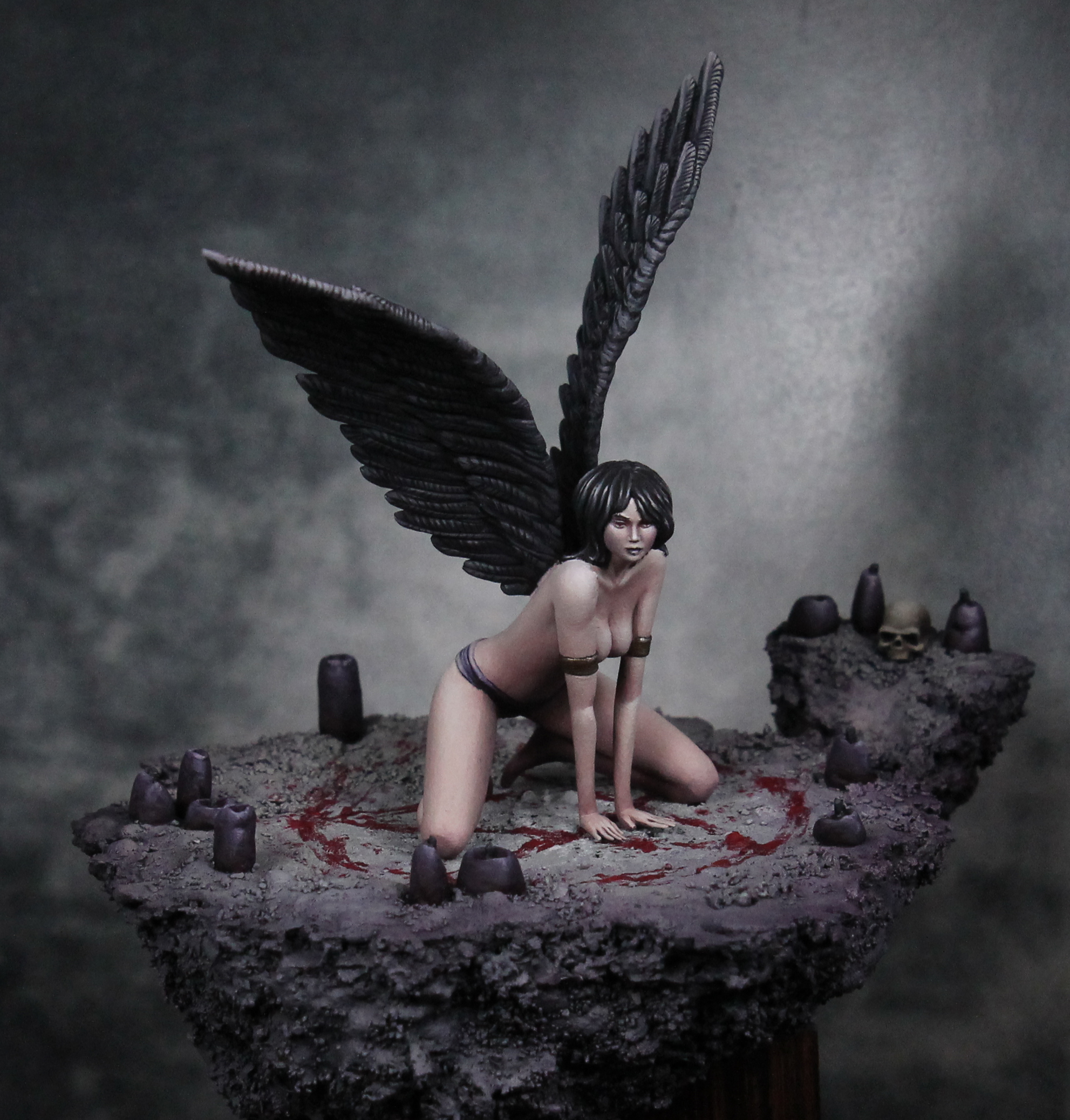 For the base, I thought a good setting would be to place her in a summoning circle.  I created the bulk of the base out of cork and then covered that with some putty and sand for texture.  I wanted to add some candles around her, so I cut up some paper clips and pushed them into the base where the candles would go.  This gave me something to sculpt around and helped to secure the candles to the rest of the base. The painting of the base went smoothly and this piece has been delivered to its new home in the hands of a collector. 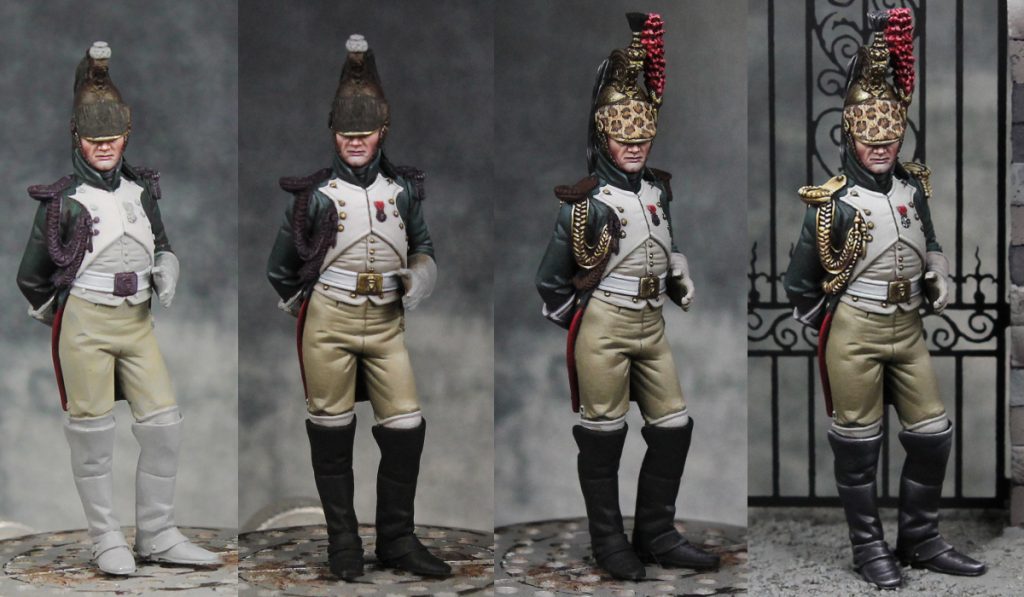 The second project was the topic of a recent tutorial I wrote, painting shiny looking black.  The figure is a 54mm Napoleonic piece from Pegaso representing an Officer of the Empress’ Dragoons.

I love working on Napoleonic era figures.  For historical figures, they give you tons of colors to work with and ornate uniforms 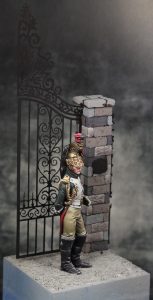 with lots of great details to paint.  I’ve done one other Dragoon, but that was in campaign gear and this new one is an officer in his dress uniform.  I’ve been experimenting with different finish effects.  So, in addition to the shiny look for the boots, I painted the cord details and epaulets with a somewhat subdued NMM to imply gold lace.

Meanwhile the rest of his clothing was painted in a high contrast style, but with softer transitions to look more like cloth.  I’m in the process of painting the base at the moment.  Since he’s in his dress uniform, I put him in a more urban setting, outside the gate of some French chateau.  The local figure group in Los Angeles, SCAHMS, has a show coming up in early April, so I’m hoping to have this figure wrapped up in time for that.

This last month, I’ve spent most of my time painting Broken Toad’s Sail Away bust for a competition that Jason is hosting on his Patreon. One of the main parts of the competition is how to paint female skin tones, so I spent quite a lot of time trying to tweak it back and forth to get it as good as I could. The only thing that I wish I would have done differently is to have stepped out of my comfort zone a bit more but I’m still very happy with how she turned out. 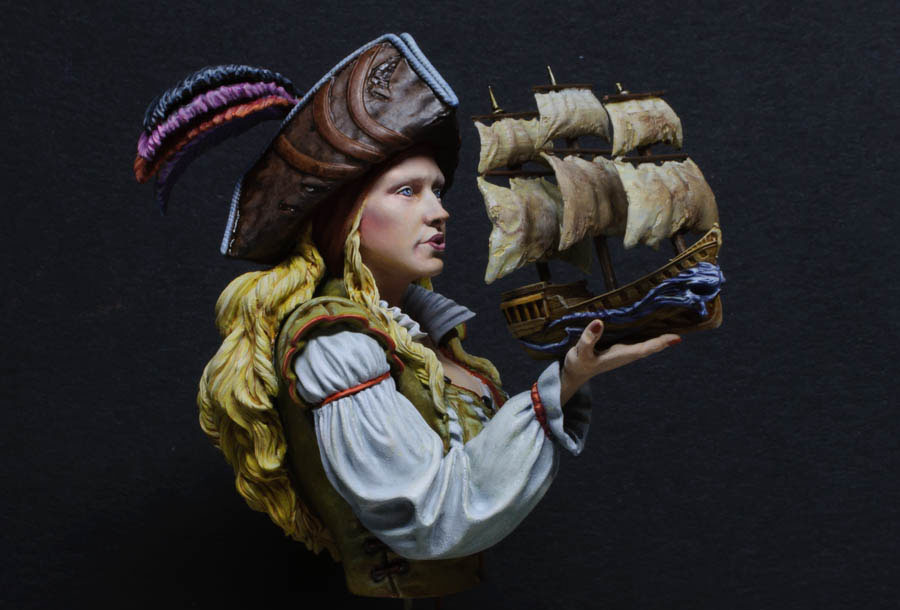 For my next project, I’m going to start on what I hope will be my main entry for Scale Model Challenge in October that I’m attending. After much consideration, I had two candidates to choose from, Jigoku Dayu’s Dreams by Nelya Vitvitska and Frank Von Stein from Terrible Kids Stuff. Both are amazing miniatures but it was quite an easy decision, I had to go with Jigoku Dayu’s Dreams, which I think was the best miniature released in 2016 and I also enjoy painting female skin 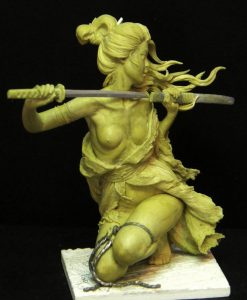 more than the male counterpart.

I bought her when she released it and have been saving for when I felt that I could do her justice, and I think that time has come, with what I learned from painting Sail Away.

This will be my first in real life competition as well as my first international show that I attend and it’s going to be a good experience and a great opportunity to meet and talk with more people in this hobby.

As variety is the spice of life (or Spice is the spice of life, dependent on your science fiction leanings) my updates are going to be centred around my delving into the world of sculpting, something I have dabbled with for a year or two, mostly in a digital form. Now, however, I’ve taken the leap into physical sculpting and a couple of weeks ago I bought myself some MonsterClay, a professional grade oil-based clay of the type that gets used by sfx artists across the globe, mainly for mask and prosthetic prototypes (check out the Troll Market in Hellboy 2 :The Golden Army, a lot of the creatures would have been originally sculpted in monster clay or Chavant NSP which is very similar). 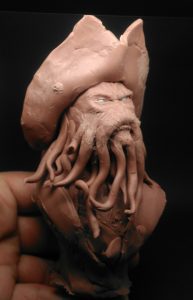 physical sculpt before aside from a half finished bust of a bear and part of an orc, I spent the first week just getting used to working with the clay, how long to heat it up and how to cool it down when you need to quickly have a solid shape to work on. An hour every night just making blobs and shapes ensued.

The clay itself quickly becomes a joy to work with, two or three minutes in the microwave gives you a lovely soft pliable material that is great for quickly blocking out a form, then you can either leave it to cool naturally, or (as I do) run it under the cold tap for a few minutes, which turns it into quite a hard clay that will let you put detail on top with softer clay or carve sharp details into the surface. And if you go wrong? just pop the sculpt into the microwave again and turn it back to a soft squishy substance.

This week I decided that I’d have a go at one of my favourite film characters, Davey Jones from the Pirates of the Carribean movies. I don’t do things by halves do I?

I started by blocking out the basic shape and did my best to capture the spirit of the character. 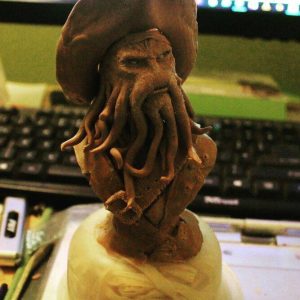 On any normal Bust, the blocking out will be the most time consuming part, because you’re trying to get the ‘essence’ of the character distilled into a small scale, and most of that will come from the basic proportions.

However, although I did do a lot of refining of the face to better portray Davey Jones, this is nothing compared to the mammoth task I have ahead of myself, which mainly consists of tentacles, suckers and barnacles…lots and lots of barnacles.

Here’s a shot of how it looks at the moment, I’ve only scratched the surface with the amount of detail this figure needs even at a small-ish scale (he’s about 5 inches tall not including the hat). 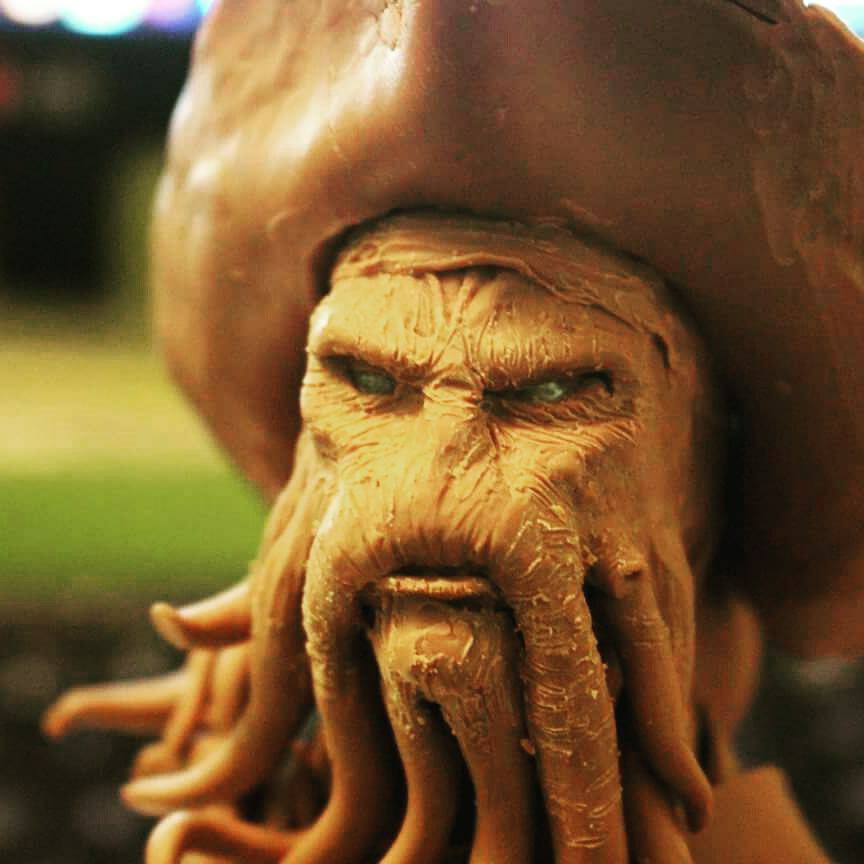 Although the face looks quite rough at the moment, I’ve found that white spirit and a brush smooths it out nicely, which is great because I want a nice contrast between the rough clothes, rusty strap buckle and the smooth yet detailed skin. Hopefully by the next update I’ll have him finished, as at least an hour per night on your chosen skill will see huge chunks of progress made in a short space of time!