I really like the historical releases from Tartar Miniatures, there is a gritty realism to Oleg Pogosyan’s sculpts and there is a genuine historical accuracy regarding the garb and weapons of his subjects. Man at Arms XIV Century actually depicts Bertrand du Guesclin (1320-1380) and comprises 16 polyurethane resin parts including a stepped scenic base. There are two head versions, although I noticed the bald headed version had a hole in the chin, the owner Sergei Savenkov was more than happy to send a replacement. The kit of Man at Arms XIV Century, arrived in it’s customary white box adorned with the box art by Sergey Popovichenko, and the reverse showing the alternative art by Ruslan Vorobiov. For some reason I never like the image on the box compared to the images I have seen of Sergey’s paintwork on sites such as Putty & Paint, in my opinion this is something that could easily be rectified. There is a ziplock bag of leaves too which is a great touch as these types of historical project will always involve adding a scenic base in one way or another. 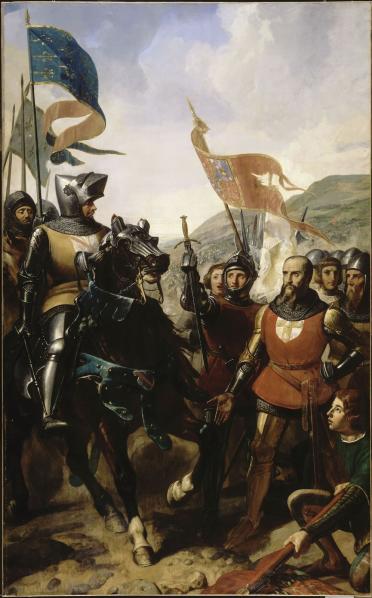 at the battle of cocherel

Bertrand du Guesclin a Man at Arms of the XIV Century, was born near Dinan, at Motte-Broons, Brittany, the first-born son of Robert du Guesclin and Jeanne de Malmaines. Him and his family were of minor Breton nobility, the seigneurs of Broons.

He initially served under Charles of Blois (1319-1364) in the Breton War of Succession (1341–1364), against Jean de Montfort (1295-1345), who was allied with England. Following a raid on the Castle of Montmuran in 1354 by Hugh Calveley which he countered, he was knighted whilst serving Arnoul d’Audrehem (1305-1370). Two years later he was called upon to once again counter a siege and defend the area of Rennes incorporating guerrilla tactics against Henry of Grosmont, during this very siege he killed the English knight William Bamborough in a duel.

The resistance of du Guesclin and his free companies helped restore French morale after The Battle of Poitiers (1356), and so he came to the attention of the heir apparent to the throne of France. When Dauphin Charles became King in 1364, Charles sent Du Guesclin to halt Charles II of Navarre also known as Charles the Bad (1332-1386), and prevent him taking the Duchy of Burgundy. On May 16th, he engaged an army commanded by Jean de Graille (a military leader in the Hundred Years’ War who was praised as an ideal of chivalry) at the Battle of Cocherel which he routed, this victory forced Charles II to sue for peace with the French King. 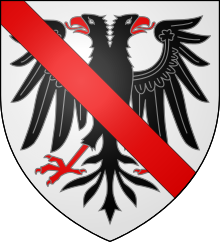 The sigil of Bertrand du Guesclin

On 29 September 1364, at the Battle of Auray, the army of Charles of Blois was heavily defeated by John IV, Duke of Brittany and the English forces under Sir John Chandos. De Blois was killed in action, ending the pretensions of the Penthievre faction in Brittany. After chivalric resistance, Du Guesclin would eventually taste defeat at the Battle of Auray where an alliance between Sir John Chandos of England and John IV, Duke of Brittany defeated and killed Charles de Blois. Du Guesclin broke his weapons to signify his surrender and was captured and ransomed by Charles V for 100,000 francs.

However, War with England was renewed in 1369, and Du Guesclin was recalled from Castile in 1370 by Charles V, and was named Constable of France otherwise known as First Officer of the Crown. He was officially presented with the rank of Constable by the King on 2 October 1370 and immediately defeated an English army led by Robert Knolles at the Battle of Pontvallain and then reconquered several key cities forcing the Black Prince to retreat back to England. 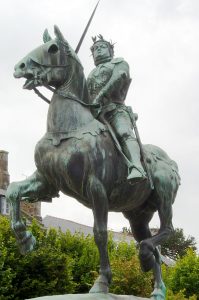 the commemorative statue at Dinan, France

The Franco-Castillan fleet destroyed the English  at the Battle of La Rochelle (1372) where more than 400 English knights and 8000 soldiers were captured. Bertrand then ordered destructive raids along the English coasts in retaliation. Several more Battles and victories followed and he had reconquered much of France from the English when he died of illness at Chateauneuf-de-Randon (Southern France) while on a military expedition to Languedoc in 1380.

He was buried at Saint-Denis in the tomb of the Kings of France. His heart is kept at the basilica of Saint-Sauveur at Dinan where this is also a statue.

The main part of Man at Arms XIV Century, consists of torso and legs which is presented with left leg raised and foot planted firm as if he is climbing a step with a twist to the upper torso. There are various holes throughout which act as locators for the various parts, assembly is straight forward and fit is snug, there should be no need for gap filling if you take care. The detailing is very good with a nice cast, carrying out research and collecting references is vital to doing the figure justice. 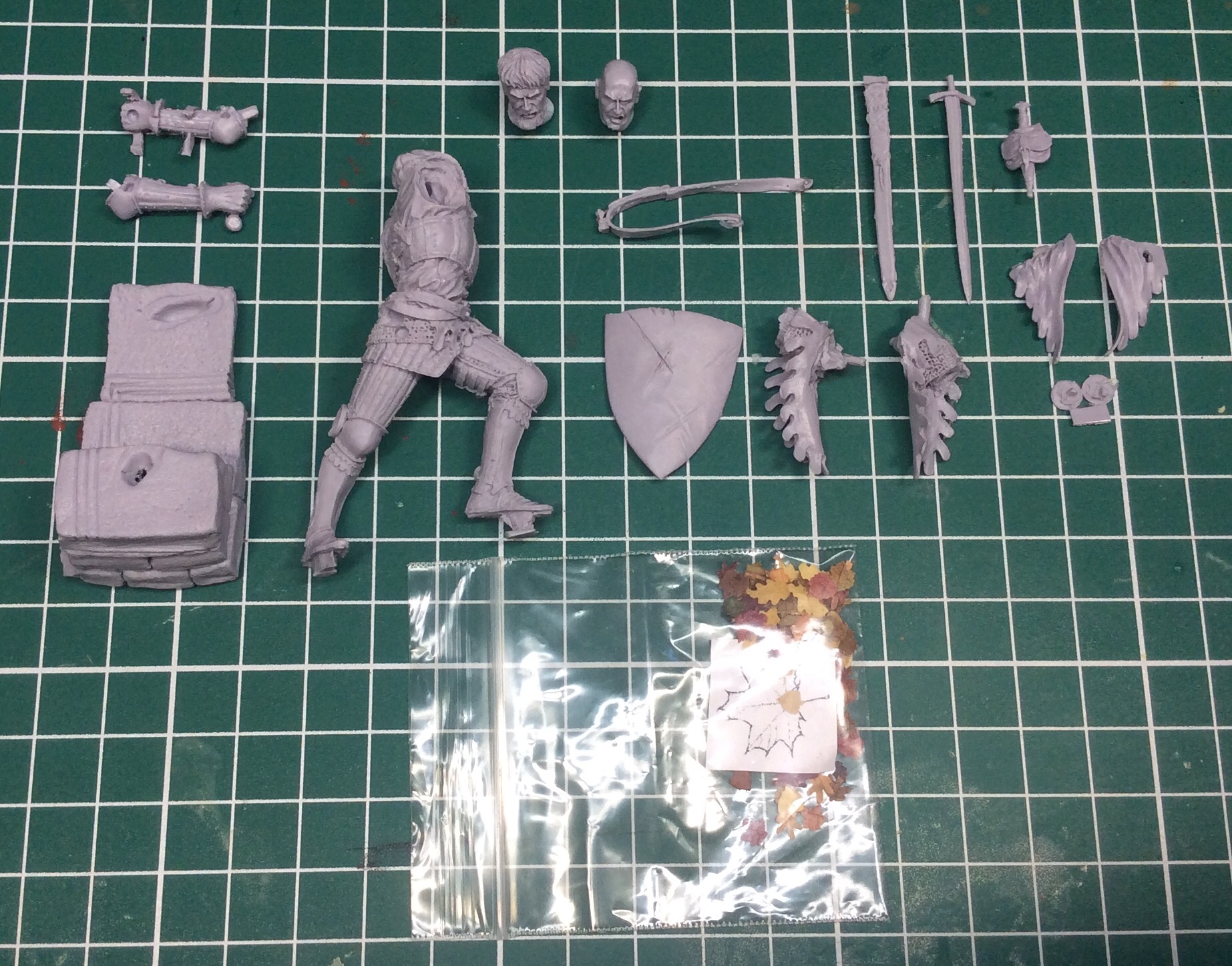 The various straps and buckles all show sharp undercuts and the fabrics carry realistic looking folds and creases, in particular to the reverse of the jerkin where the twist of the body causes considerable cinching. The chainmail is simple but fine and to scale and the ribbing to the padded trousers is prevalent during the period is once again nicely done. 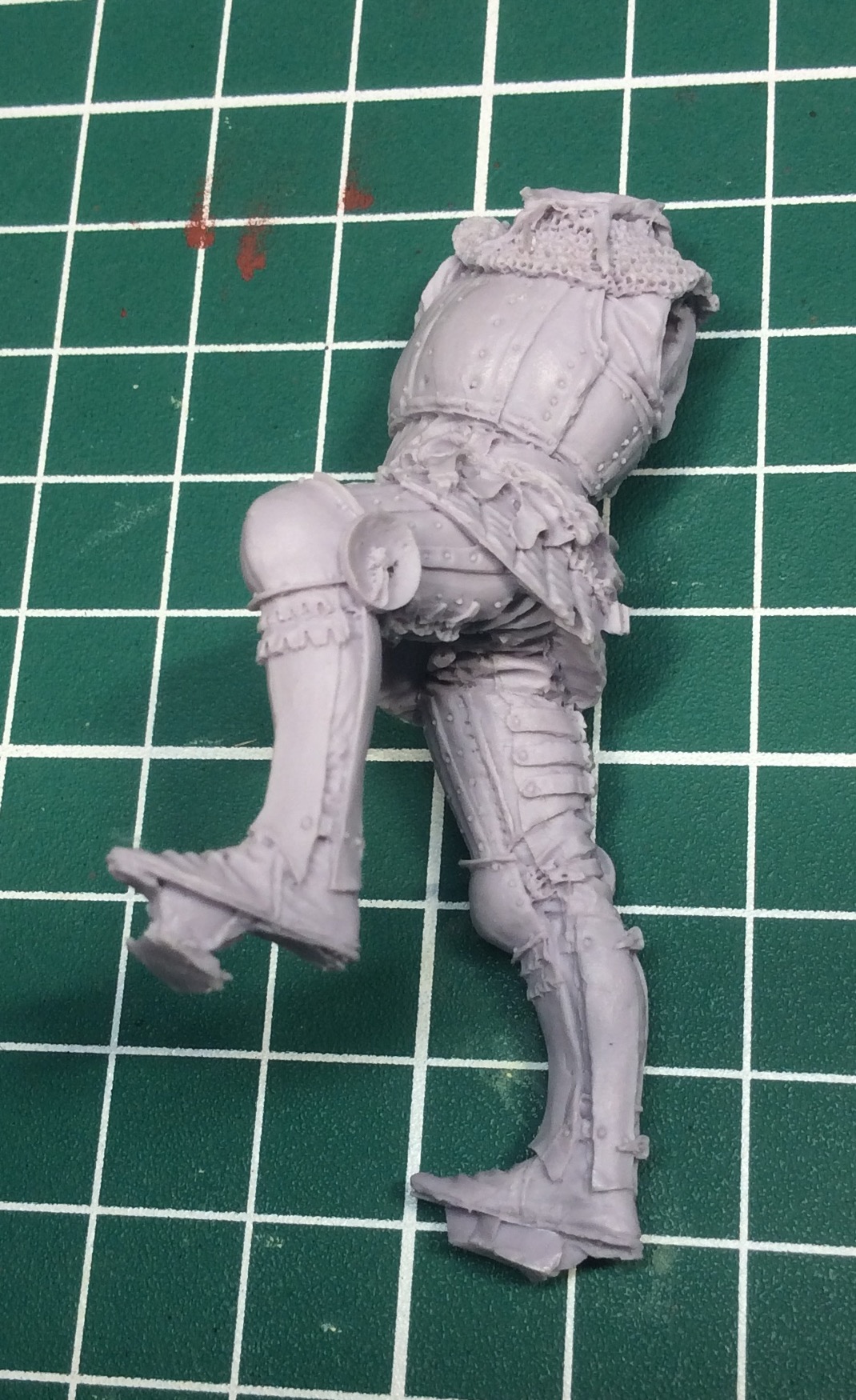 Beginning with the arms we notice that they are a two part assembly, first you need to attach the upper arm which is draped in the elaborate shaped sleeves, at the elbow is a hole to accept the lower arm. Also at the elbow is the attachment point for the circular portion of armour, a smaller identical piece to those found on the outside of each knee. There are two tails to the jerkin that need attaching next, that continue the patterned look to the fabric, it is important to add these next as the right hand one has a hole which lines up with a hole in th right hip that accepts the pouch and small dagger. 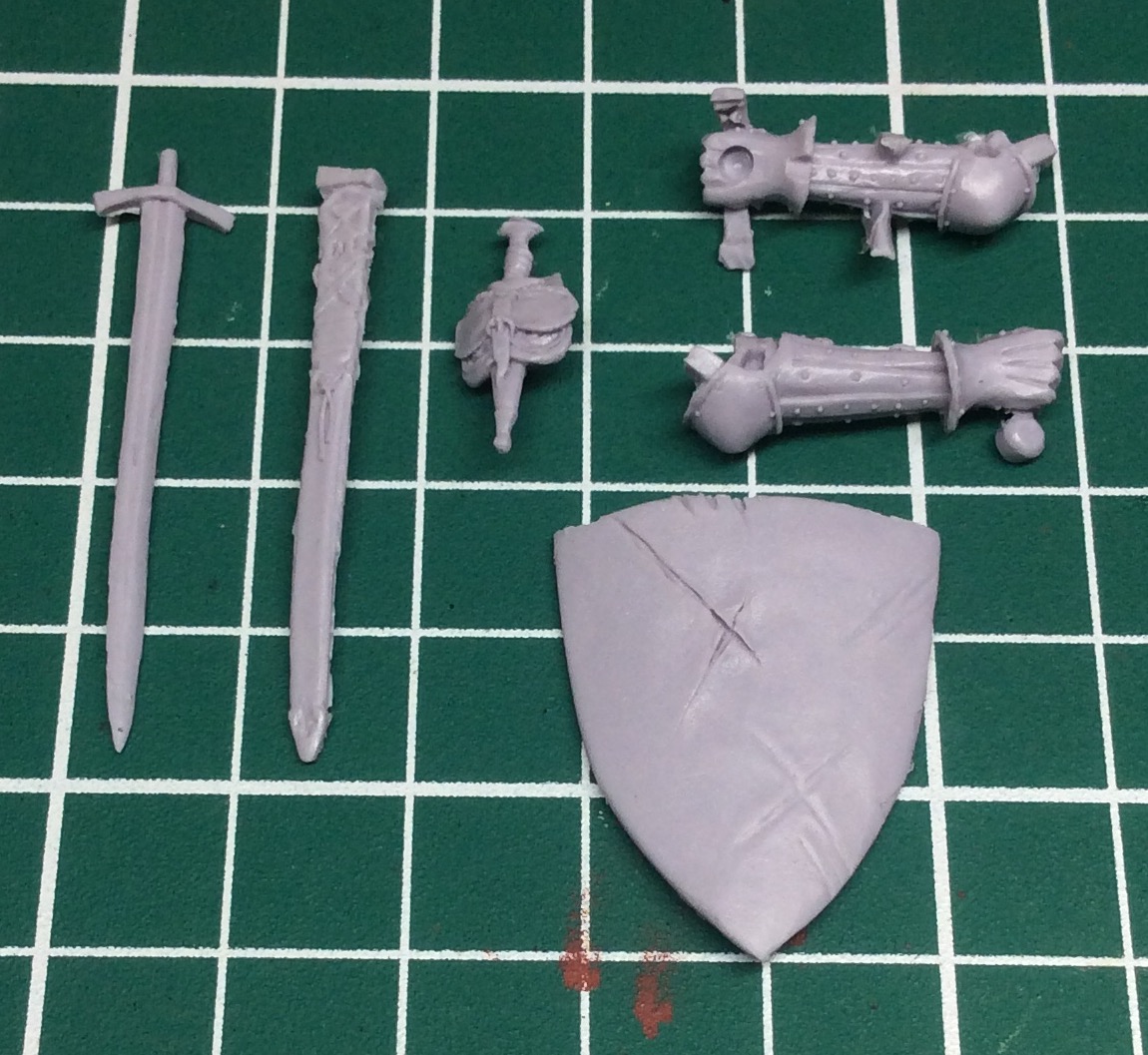 The left arm accepts the shield and the right is for the sword, held aloft in defiance. I would suggest pinning the sword blade for added security and I would paint the shield separately prior to attaching. The fit of shield to the arm is perfect and it comes with the strap, which is attached via two small pegs, sporting a nice droop to the strap which we can clearly see when assembled.

The scabbard is a rather plain affair and attaches to a hole on the left hip.

The two heads on offer are quite different but bare a great likeness to the art and statues of Bertrand. One is bald headed and angry looking whilst the second depicts Bertrand in his later years with bowl haircut and full beard and moustache, similar to that worn by Warrior Monks. 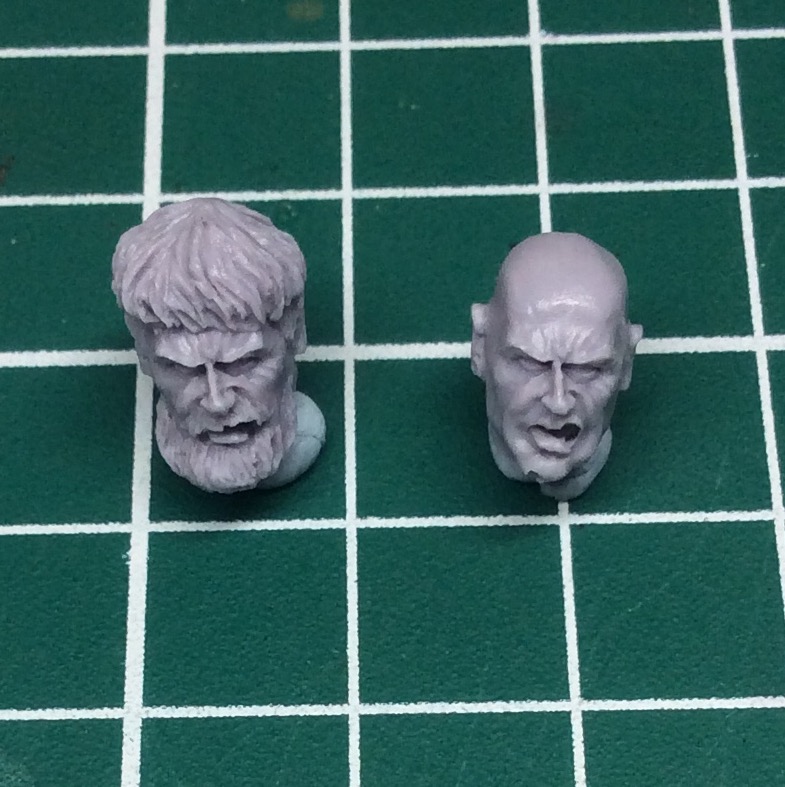 Man at Arms XIV Century is a gritty and dynamic tribute to a charismatic and brave military leader in French history. The pose is exciting and the silhouette is well balanced throughout, the design and sculpt is historically accurate and the anatomy is to scale (75mm). Tartar Miniatures continues to expand on it’s eclectic interest in historical subjects and are always looking to represent the unsung hero on the battlefield.

Tartar Miniatures has a growing reputation and fanbase and this piece will appeal to the historian, collector and painter, indeed despite being  an historical subject, it could easily be painted as a fantasy piece, a mercenary, barbarian or Warrior Monk.

This figure works out to about £33 which I believe to be a very competitive price point and the excellent customer service (replacement of the head) is an added bonus.