The Lotharingian Knight is the latest historic bust release from DG Artwork, sculpted by Dae-Hyeoung Kim himself, it is a six part, 1/12 kit cast in polyurethane resin. The sturdy box is adorned with the boxart, again painted by Dae-Hyoung and the parts are secured in ziplock bags and protected by bubble wrap. This is a slight variation on the traditional head and shoulders bust in that we also a left arm which clutches his spear to his chest. First impressions of the sculpt and cast are good. 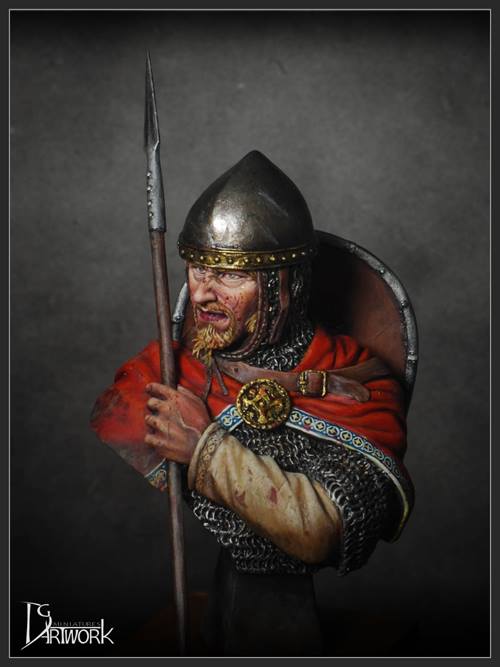 The boxart clearly shows the different elements of texture and detail

Lotharingia (Lotharii regnum) was a medieval successor kingdom of the Carolingian Empire (800–888) which was a large empire in western and central Europe during the early Middle Ages. It comprised modern day Holland, Belgium, Luxembourg, Lorraine (France) and certain regions of Germany. It was ruled by the Carolingian dynasty, in turn the kings of the Franks (a group of Germanic tribes that inhabited the land between the Lower to Middle Rhine in the 3rd century AD, eventually merging as the people of Gaul). It was named after King Lothair II (835-869), this territory was given to him once the kingdom of Middle Francia was divided among the sons of his father Lothair I in 855. 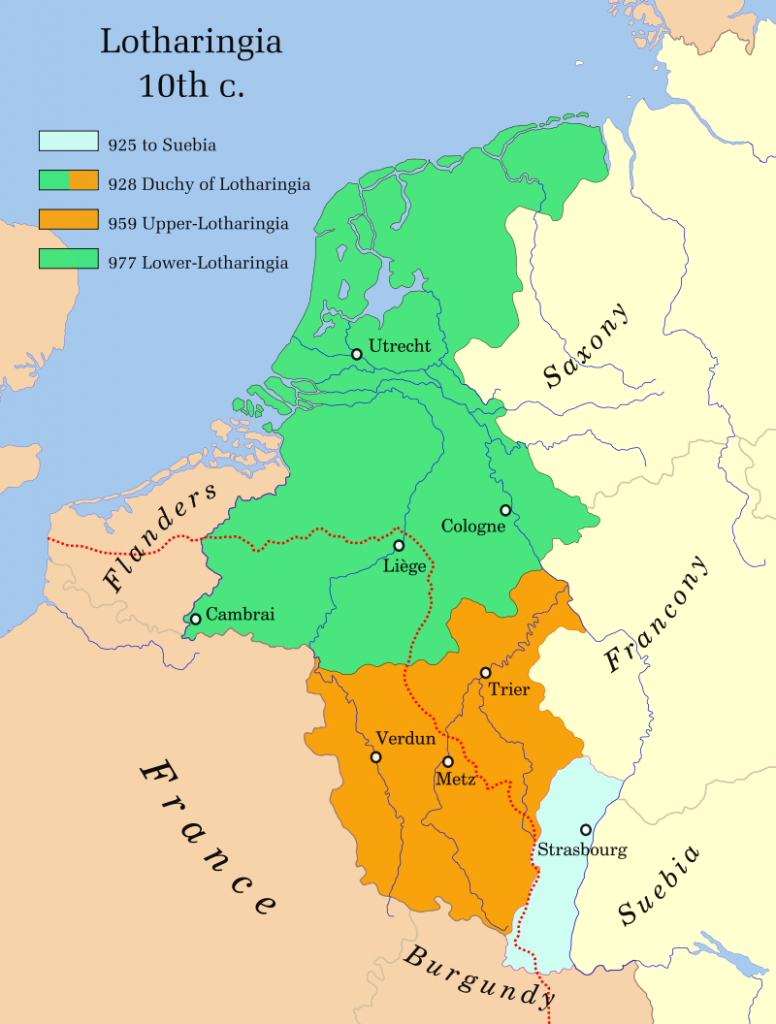 As Lothair I was dying in Prüm (a Benedectine Abbey) Lorraine, he divided his kingdom between his three sons as outlined in the Treaty of Prüm (19 September 855). Whilst the eldest son, Louis II was given the imperial title and the land of Italy,  Charles, the youngest brother, indeed still a minor would administer to the realm of  Provence (geographical region and historical province of southeastern France) and thus leaving the middle son, Lothair II, to rule the territories in the North, an area which had very little in the way of unity whether it be ethnicity, linguistically or politically.

He ruled from within Aachen and never left his kingdom. He father one illegitimate son called Hugh who became the Duke of Alsace, Lothair II died in 869 with no legitimate heir. Out of his uncles, Charles the Bald wanted to rule the whole of Lotharingia yet eventually agreed with his brother the King of East Francia, Louis the German, to divide the Kingdom and in 870 both signed the Treaty of Meerssen. The united kingdom of Lotharingia was no more however, in 876 Charles the Bald, still harbouring ambition to be the overall ruler,  invaded eastern Lotharingia yet was defeated near Andernach (district of Mayen-Koblenz, in Rhineland-Palatinate) by Louis the German.

My guess is that this bust of a Lotharingian Knight more than likely represents one of the combatants from this period.

The bust is comprised of mainly one piece which has a shaped plinth sculpted to the bottom of it. My feeling about this bust is that it offers a perfect canvas for a “newbie” to try his hand at painting a bust, I believe this is a very simple bust to assemble and although there are various elements and textures, the large open spaces should make it relatively easy to paint too.That isn’t to say that it can not be made look great, of course it can, in the right hands this can be a stunning project, I am merely saying that painters of all levels would be satisfied with the challenge presented by this kit. 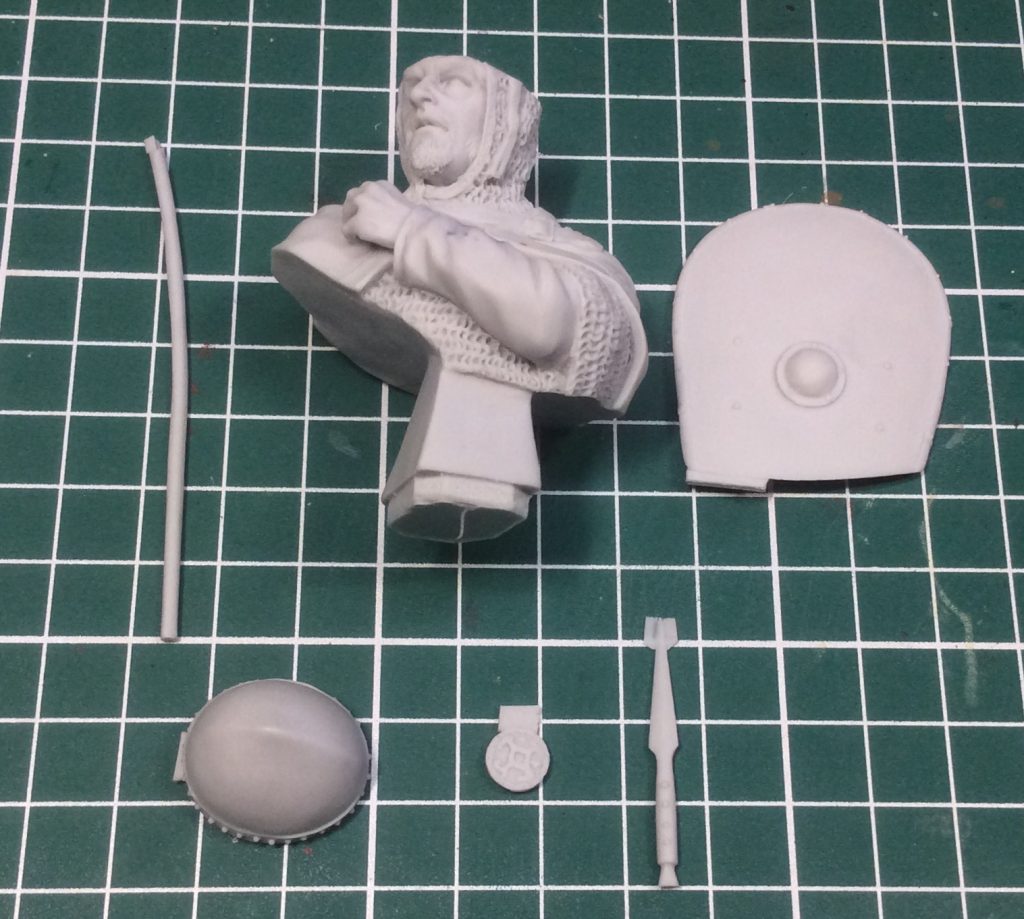 The Lotharingian Knight  is depicted wearing full chainmail including the hood under the helm. The chainmail though not cast using actual chain is relatively well sculpted with nice depth to the texture. Beneath this we can see our knight is wearing a long sleeved tunic and draped over the top and clasped below the neck, we have a thick cloak. The cloak has a broad border along the central edges, it is free of engraved or embossed details which allows you to create your own freehand pattern. We also have a nicely detailed leather strap sculpted to the surface of the cloak that reaches low across the shoulders and around the back. When the shield is attached it will complete the illusion that the shield is strapped to the Knight’s back. There are sharp undercuts where appropriate and folds and creases to the materials are realistic looking and not over worked. 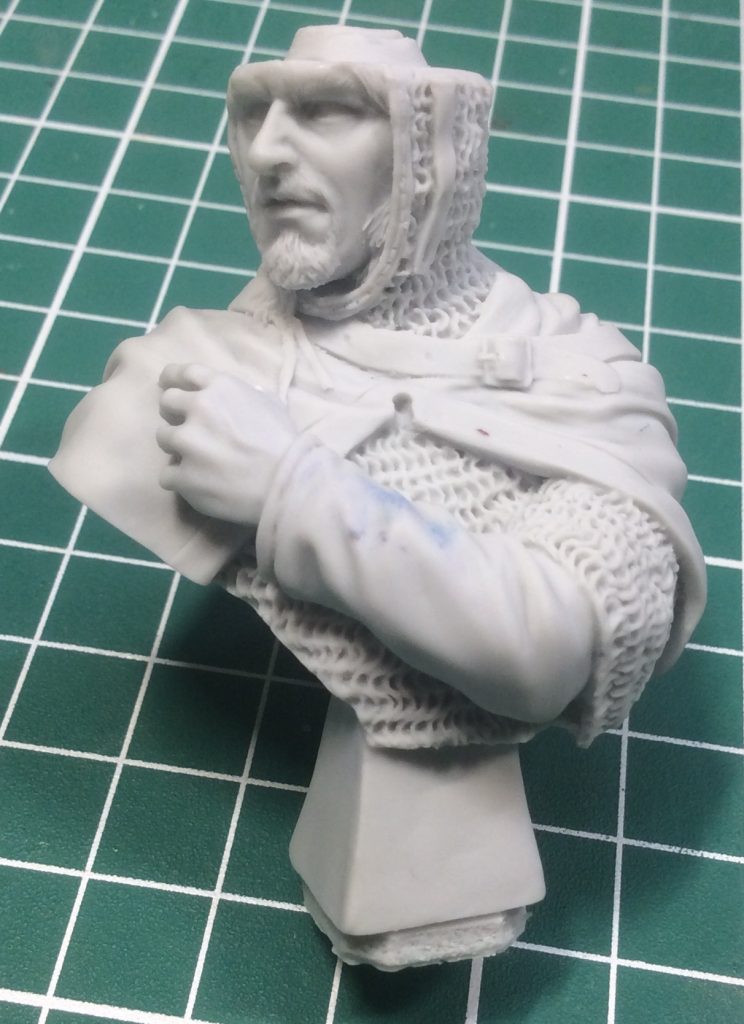 a close up of the central piece, note the slot to receive the clasp

The face beneath the hood sports a goattee beard and you can see along the sides sections of sideburns and a glimpse of hair just under the hairline. In my opinion it displays a hardened veteran with quite harsh and troubled features, complete with glaring eyes and a sneer at the mouth. The helm is a nice, semi conical shape with studded border about it’s bottom edge. It attaches via a large peg to a hole in the top of the sectioned head. The hands are reasonably sculpted but I hear the face and hands are really important to any sculpt and so if I could offer any advice to the sculptor, it would be to lavish more time and detail to the fingers. 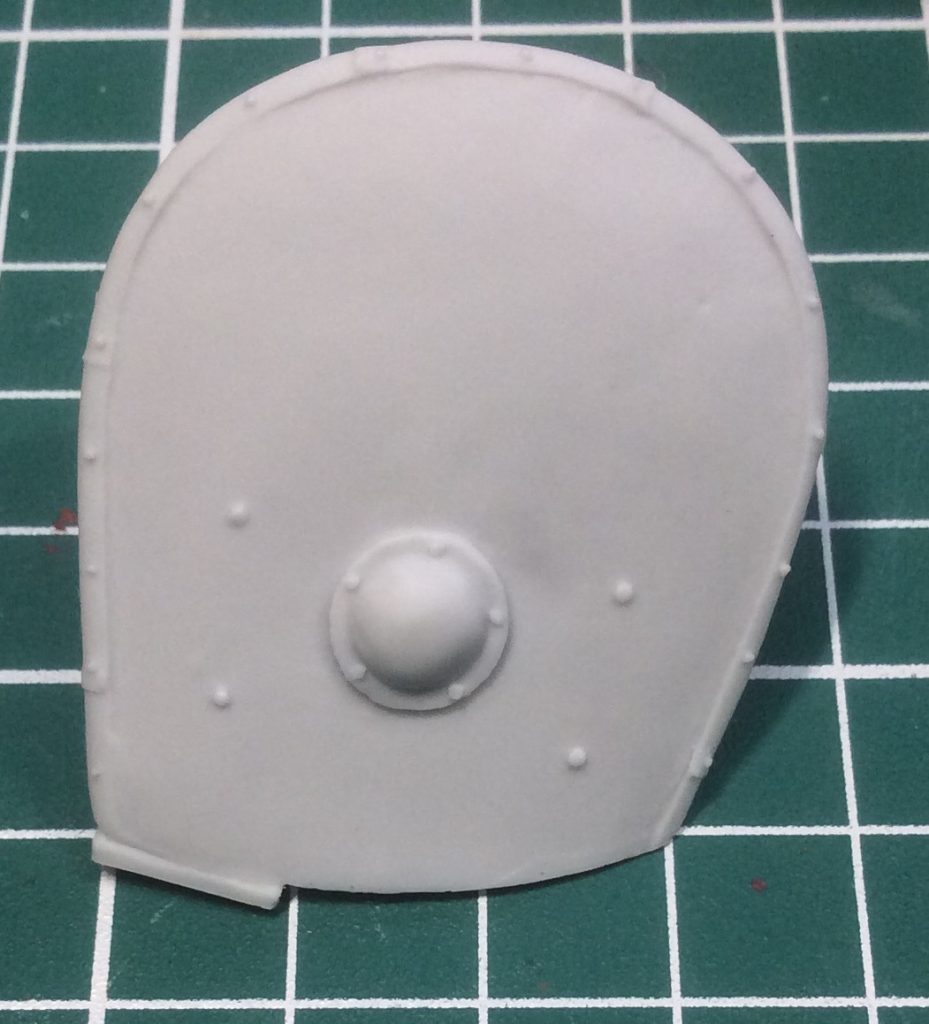 the cut off section of shield, plenty of space for some freehand

The spear is a two part piece which I usually don’t like mainly because it involves gluing two pieces with a small surface area together with no perfect way of ensuring a strong attachment. The handle is made from resin and again I would prefer for it to be a length of copper/brass rod or similar. The spear head is nicely shaped and detailed displaying the heads of the “pegs” that secure it to the wooden shaft. We have the round clasp that attaches into a groove located centrally in the trim of the cloak and it has nice embossed detailing of the house sigil. 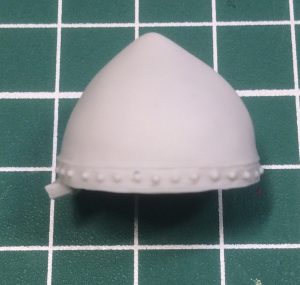 The shield is an interesting shape with a central, round boss, studs and pegged cloth rim although the detailing to the inside of the shield is basic at best. It attaches via a oblong shaped peg and offers a nice backdrop for the head. The cast is very good with no major defects such as air bubble holes or slippage, there are several resin blocks that need removing and filing smooth but preparation and assembly should be particularly straight forward.

This is a straight forward design with the bust being predominantly the classic style of head and shoulders. The kit creates a nice silhouette, instantly recognisable and the shield offers great backdrop to frame the face. I like the fact that DG is always looking to cover historical subjects that are lesser known say to the more popular Celts or Vikings for instance. Although the Lotharingian Knight bust per se is not overly original the subject matter is one which I haven’t seen covered before and a little research should enable you to create an interesting and unique paintjob.

This is always tricky to quantify because an element of this is due to popularity and let’s face it an original, historical subject is rather niche therefore, not particularly popular and therefore , would be considered undesirable. In this case I refer to it more as being desirable by those with an interest in history and those that are part of DG’s fanbase which continues to grow.

The Lotharingian Knight comes in at $42 which is a price point I believe offers good value for money. The quality of the sculpt, cast and presentation of the kit in my eyes is definitely worth the money and should make a great addition to anyone’s collection.