Lord of Malice – the PRELUDE 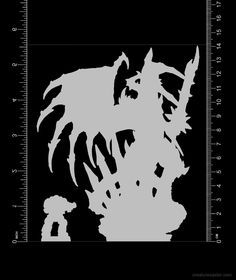 The Lord of Malice from Creature Caster, is instantly recognisable as a scaled up and better designed Be’lakor, in my opinion at least. With a wealth of detail and a superb cast, this demon stands an incredible 13.5 cm and with head and weapon options provides, display painters and gamers alike a real gem of a project! I remember when Creature Caster first turned up in the scene with their debut figure, The mountain Dragon and here they are now offering truly great creatures and monsters at a surprisingly competitive price.

The kit arrived in a sturdy brown box adorned with the Creature Caster logo with the parts wrapped in bubble wrap and secured within a large bubble bag, nice and protected. First impressions on opening the bag are very good indeed, a lot of parts, great detailing and a nigh flawless cast.

Beginning with the two part base which in itself is a nice piece of detailed kit. The terrain actually looks detailed rather than just a roughed out area for a figure to sit on, along with the section of a “chaos star” jutting up from the rear it is a nice way to frame the figure. Even with all of this texture there is no cast imperfections, which is testament to the cast quality in its own right. 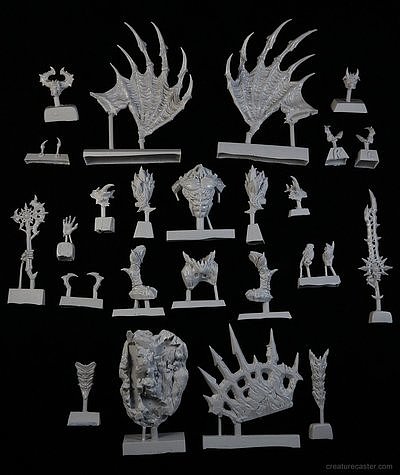 Before we start talking about individual parts, the first thing I noticed is the way the parts fit together, reminds me a little of the kits from Kimera Models, everything kind of snaps together, tight peg and hole assemblies with a brilliant fit. I honestly don’t think there will be any need for any gap filling and preparation should be quite straight forward too, although each part will need cutting from sprue and the casting plugs removed and filed smooth.

The torso of The Lord of Malice, in particular, looks a little like Shaetann sculpted by the uber talented Raul Latorre for Mproyec and the influence of Be’lakor is also there, but this is more than just a copy of another design. What it lacks perhaps in originality is more than made up for in coolness, size and detail, a proper demon prince for sure!

Every single part is covered in detail and texture but not to the point that the sculpt becomes too busy, there is a lot here for your money and any painter is sure to have a blast with it. The two head options are very nice, a Khornate feel to the malice and hate sketched into the features. There is a lot of ridges, spikes and demonic flesh on show here and the two wings that arch over the shoulders are suitably detailed unlike some other releases I could mention, actually seem in scale with the figure, both in size and thickness of the resin. 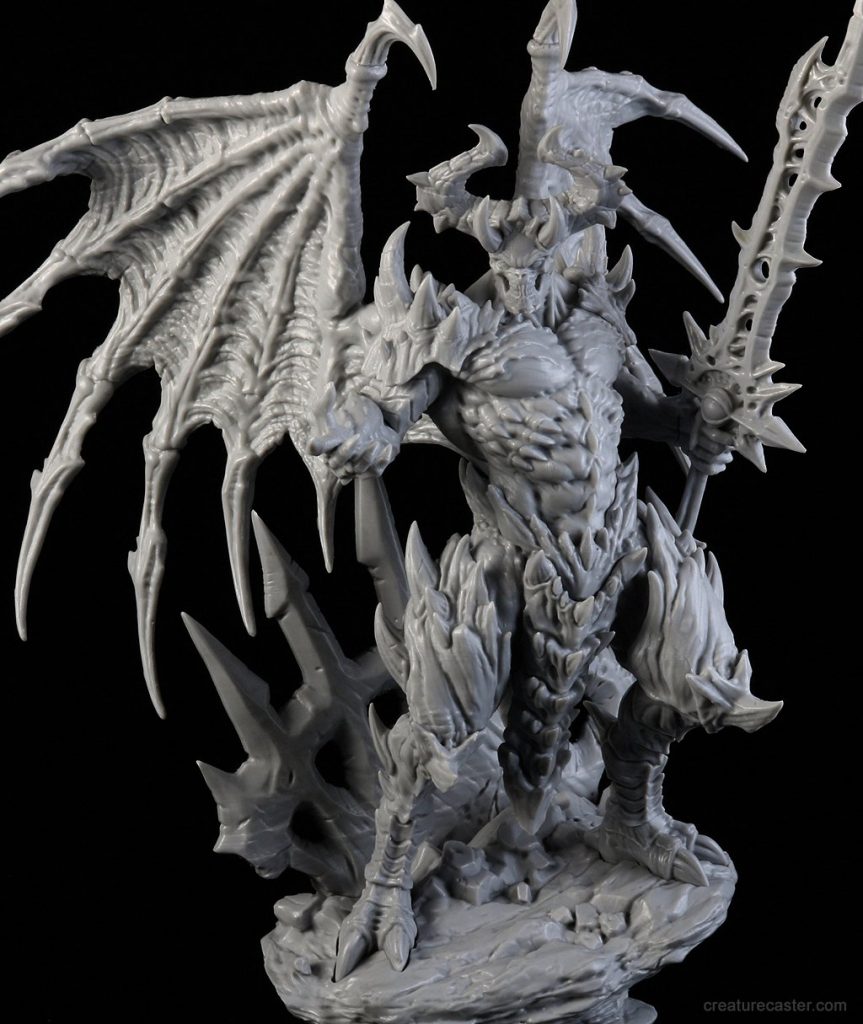 at 13.5cm this is a imposing centre piece

For the most part assembly should be quite straight forward but an instruction sheet would have been useful, some parts may take a little to figure out but then again I am useless at assembling figures! As you can see in the photo above, the level of detail is quite superb. It might be an idea if the wings don’t need gap filling to paint the figure without the wings and to paint them separately and add later. 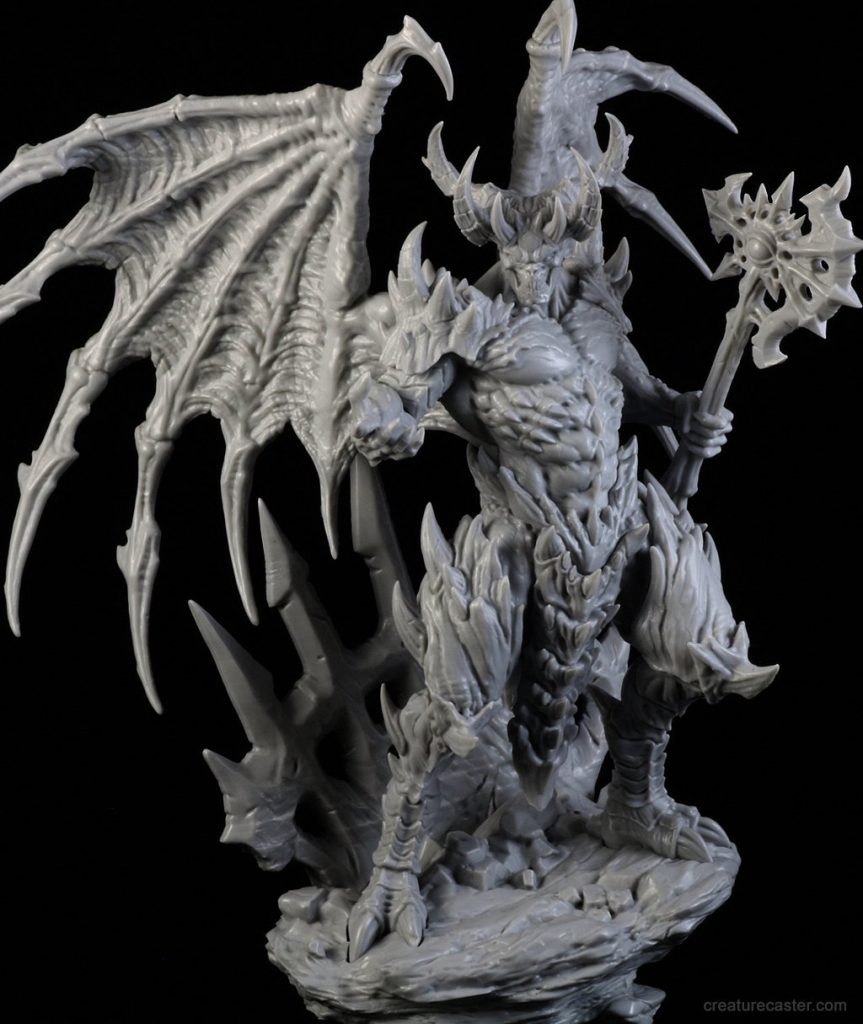 note the alternate head and weapon

Above you can see the two additional options for the head and the weapon.

“The Lord of Malice is an oddity amongst demon kind. Even the most savage and brutal of demons feel some sort of affinity or kinship with one another, but this is not the case with the Lord of Malice. He feels no such bonds and is said to harbour a deep contempt for all existence, whether it be demonic or mortal in nature. He enjoys building empires only to turn them one against the other and smash them to dust. 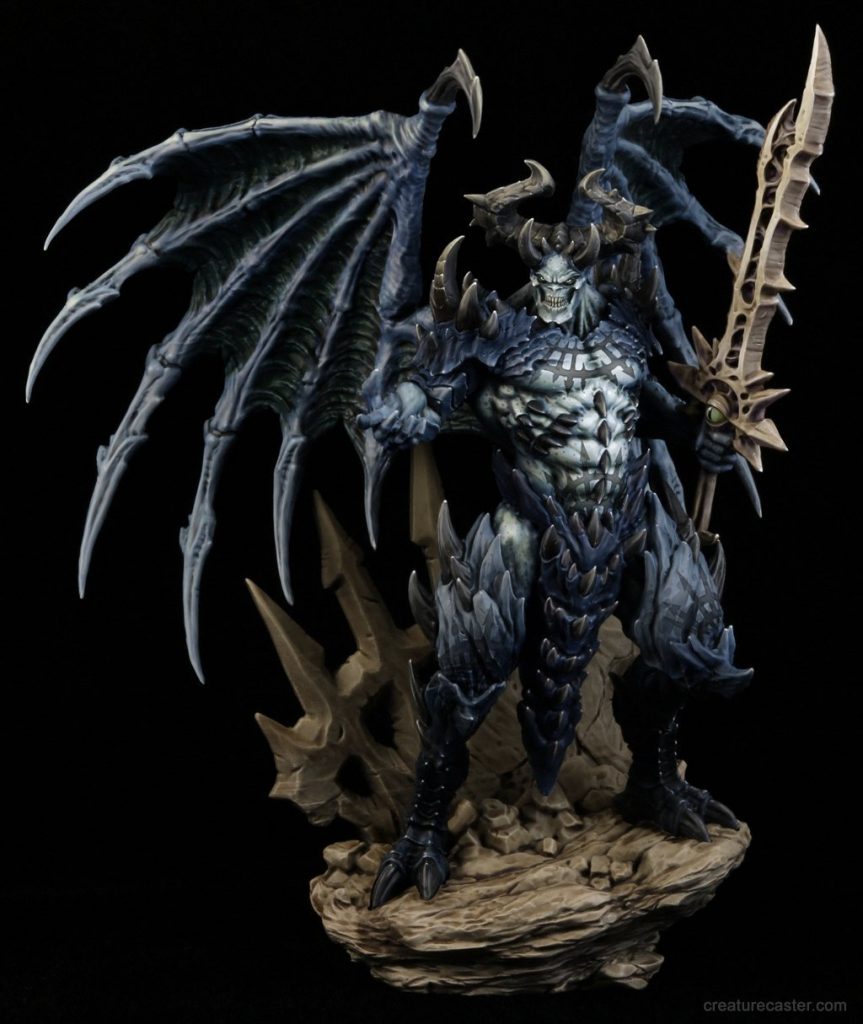 this painted version shows off that detailing and texture wonderfully

A master tactician, and possessed with with a dark charisma that is nearly irresistible, the Lord of Malice has no shortage of followers willing to sacrifice themselves to his dark designs. He cares nothing for those who devote themselves to him, feeling nothing but amusement as they sacrifice themselves for his goals. The Lord of Malice will only be truly satisfied when he stands alone as the last sentient being in all creation”.

The design is well considered with a dynamic and imposing pose. The posture is one instantly recognisable as being haughty and malevolent, the sneer to the facial features, the beckoning hand, the defiant, legs apart stance, all help to create the narrative for the Lord of Malice.

The silhouette is really striking and although lacks in originality I still really like the design. I really admire the way in which the kit has been cut for casting meaning that when assembled all the cuts are hidden, the fit is perfect. It is clear lot of thought and planning has gone into creating this kit.

Everybody loves a large, centre piece creature or monster, whether it be for display painting or gaming purposes. Creature Caster offer dynamic, large, highly detailed, archetypal monsters for their burgeoning fan base. The presentation, sculpt and cast are all of a high standard and the options within the kit makes it in my opinion a desirable figure. These kits can easily be incorporated into your Warhammer or Warhammer 40k armies. If you’re looking for a true spectacle on your tabletop or in your display cabinet then I am pretty sure Creature Caster have you covered. 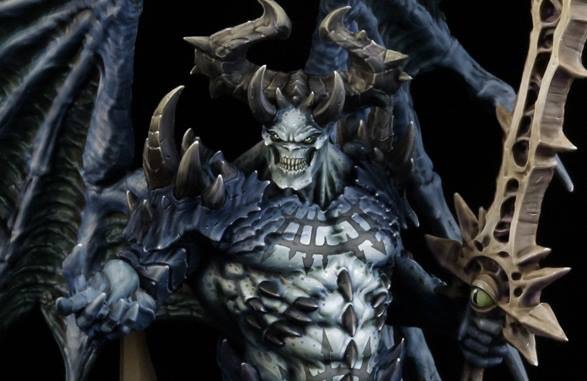 I was really surprised by the cost of the kit, at £55 I believe it offers excellent value for money. This is a big kit, lots of detail, nice pose, tons of texture and a stunning cast.