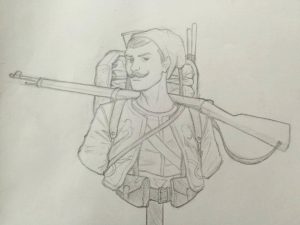 The original sketch by Sang-Eon Lee

It arrived safely and quickly, in the new packaging format, a black box within a card sleeve depicting the box art by Sang-Eon Lee.

The piece is sculpted by Eduard Perez based on a concept sketch by Sang-Eon Lee. The smaller parts are packaged in two ziplock bags and join the torso, knapsack and head, nestled between two layers of foam. First impressions as always is WOW! 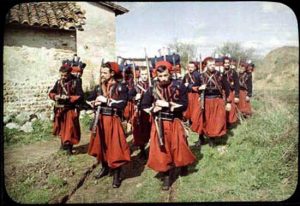 Zouave – the traditional garb was soon replaced as WWI began

The Zouaves date back to circa 1830, first recruits were those of Berber volunteers from the Algerian tribes of Zwawa, hence the name. However, it soon became evident that recruitment needed a boost, so the origins soon became a mixture of Berber, Arab, European and Black volunteers.

Many units were raised and fought with a care free, fanatical sense of duty in many conflicts. However, we are going to focus on the genealogy of the French Zouave.  These originated from Algeria in 1831. Numerous battalions were raised forming the first regiment under the command of Major de Lamoriciene. 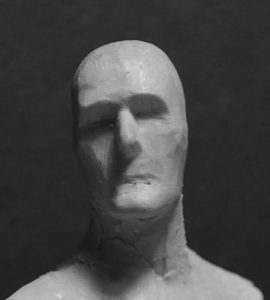 The distinctive garb of the Zouave regiments usually included short open-fronted jackets, baggy trousers called Serouel, sashes and oriental gear, such as turbans and hats similar to the Fez. They continued to wear this outlandish uniform up until the first few months of the first World War.

The development of machine gun, small arms fire and artillery meant a more conservative attire was needed and post 1915 a khaki uniform was introduced. There were four regiments, identified by the tombeaus (false pockets) colour (red, blue, white or yellow).

I found online an excerpt from the 2013 book, Zouaves – The First and the Bravest by Michael J. McAfee. This piece of writing for me really embodies, explains and sympathises with the outlandish garb that is so perfectly depicted upon this bust and the type of person these incredible soldiers were: 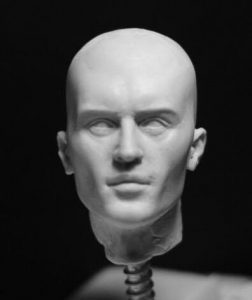 Details are worked and smoothed

“Warfare in the 19th century was no less bloody than today, yet people of the Victorian era saw it as a romatic adventure. Their vision of the battlefield was largely formed by the art of the period…… theVictorian mind viewed war through a veil of romanticism and hid from sight those aspects it preferred not to see…. the wretched, more brutal life of the common soldier was ignored…. only the most visible, colourful or romantic of soldiers were allowed to intrude upon soc
iety in the Victorian age… in England the proud Guard regiments…. in France it was the Zouaves …. stereotypes for bravery… beau ideal soldier, recklessly brave on the battlefield. treating warfare merely as a game… off the battlefield conduct tended to be undisciplined.

They were members of an elite group, bound together as a family, the regimental commander known as the Father… bound together by distinctive dress… becoming Victorian ideal of a soldier. 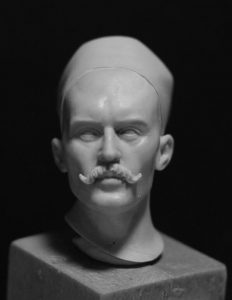 The end of the Victorian era, dead in the muddy fields of Flanders in 1914 also meant the end of the Zouave. The gallant rascal of the 19th century was gone forever”.

The sculpt by Eduard is simply wonderful, he really captured the dandy rascal character of the Zouave. Beginning with the head, the detailing is very crisp and the facial features are smooth and extravagant.

Our subject looks every bit the Victorian ideal, depicted as a handsome and courageous soldier. The contours and volumes of the face are perfect and natural looking. The hair and moustache are particularly well defined.

The oriental hat has natural folds and dimples and sits nicely upon the hair. 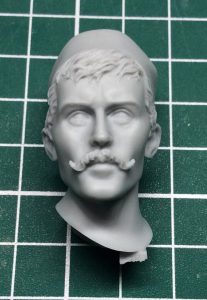 Such a handsome fellow

The torso shows the infamous, short, open jacket with wonderful detailing to the trim and the false pockets. The straps to the backpack come over each shoulder and there are nice creases and cinching of the fabric beneath. There are nice seams where sleeves join the shoulders.

The sash sits beneath the belt and pouches. Again the detailing is superb, the undercuts are sharp and the creases and folds are authentic looking throughout. There’s a square peg assembly on the back to attach the knapsack and a crease to the back of the neck that houses the rifle into position, slung across the shoulders.

The large knapsack is crammed full of textures, folds and creases and the various straps and buckles are clearly presented with sharp undercuts. Sat atop the backpack is a space for the mess-tin with nice details to clasp, hinge, chain and strap. The accuracy is unbelievable. 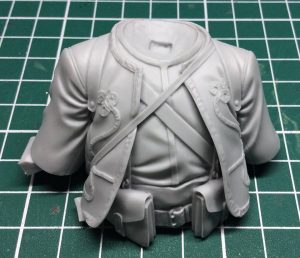 Stunning detailing to the short jacket

There is also a collection of spikes and tent-poles for making camp, the Zouave were expected to carry everything they needed and were considered excellent foragers.

Laying upon the knapsack you have three rolls of blankets dyed in the red, white and blue of the French tricolour and surrounding this is the heavy canvass of the tent.

The elegant rifle comes in three parts, strap stock and barrel and I believe represents the 8mm 1886 Lebel M93 which was in regular use in the French army before being superseded by the Berthier rifle in 1916. 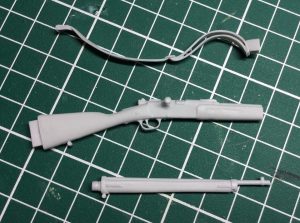 The rifle is a scale replica with nice detailing to the trigger guard, moving parts, sight and even the buckles that carry the strap.

The casting by Sang-Eon Lee himself is impeccable, there are NO moldlines, NO slippages, NO air bubble holes, NOTHING!

However, as always there are some rather large casting plugs that will need cutting and filing smooth. In particular there is a very large “shelf” of resin that will need careful removing from the bottom of the knapsack.

All of the incredible details are perfectly and crisply cast, there really isn’t much more to say about the cast other than it is perfect.

This is a rather unique, military subject and so captivating too, even more so now that I have done some research into these incredibly charismatic soldiers.

The quality of the sculpt, cast, packaging et al mean that Life Miniatures continues to set the bar very high. Sang-Eon Lee started this company with the ideal of creating “life”  in his subjects and he and his team do so continuously.

In my opinion, Life Miniatures, despite being the pinnacle of what is possible in “bust art”, still offer their products at very competitive prices.

This bust is available from many distributors around the world, keeping shipping costs down, and is available in the UK for £43 plus shipping. 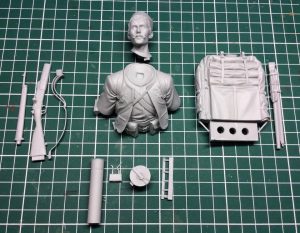 The stunning kit all laid out

I want to offer my sincerest gratitude for the continued support Sang-Eon Lee shows me and my site and a special thank you to Eduard for his pictures and help in researching this piece.

Thanks for reading, hope you found it interesting!

Where can I get it?      See Life Miniatures for DISTRIBUTORS