Vincent Zhang has been creating some pretty original concepts at Limbo Miniatures and this piece is no different, we have been supporting and collaborating with Vincent since the beginning and his love and enthusiasm for the hobby is really infectious. His figures to date remind me of a crossover between gaming figures and display figures, these are usually 30mm scale but the design is such that they can easily be painted as display figures for your cabinet or a competition.

The kit arrived in a large black box, the Limbo logo printed on the lid. The parts are contained in ziplock bags nestled between layers of foam. I think the packaging is secure but it lacks imagination, the boxes are the same size regardless of the contents, so sometimes the box is far too large. There are 12 parts to this kit, three of which have been cast in transparent, luminous resin, two as parts of a spectral ghost like creature and one other as a lantern. The other parts are cast in polyurethane resin, the cast of which looks very good on first inspection. 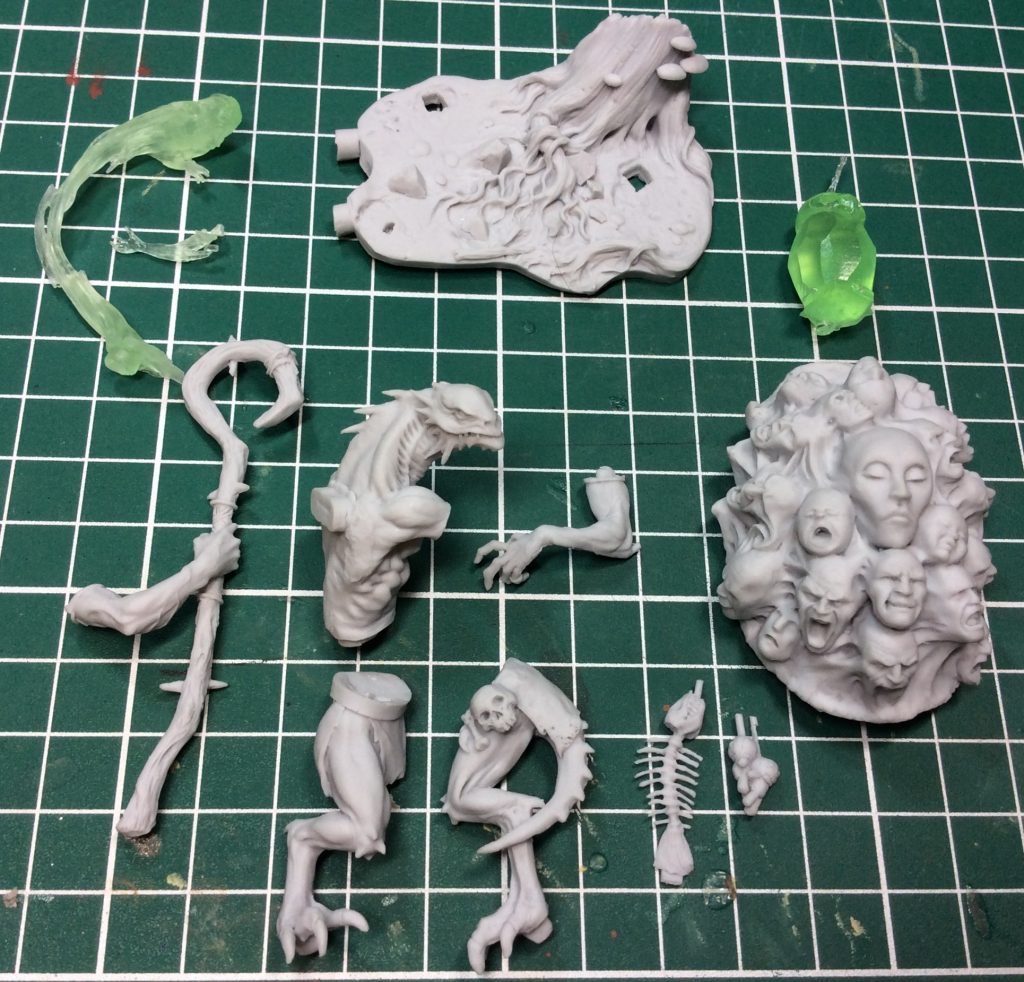 The name Zehir will be familiar to some, especially those with an interest in Dungeons and Dragons as Zehir is the evil god of darkness and poison. He is the favoured deity of the yuan-ti and patron of assassins. Zehir rules the mountains of Tytherion, lurking in the deep caverns. There is a wealth of information about this character in the D&D 4th edition, I can see how this character has influenced this particular creation. 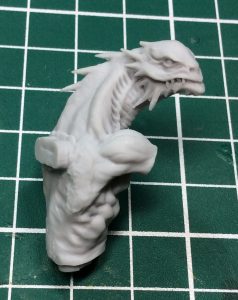 crisp casting of the details

Zehir stands approximately 60mm in height and is traditionally sculpted by the incredible Joaquin Palacios. The kit comes with a very nice scenic base, with a section of tree trunk, complete with unearthed roots and fungi. There are slots in the base to accept square pegs on each foot of Zehir.

The two legs attach via a rather clever cut at the rear with the front loin cloth hiding the join, the legs fit perfectly and then align accurately to the slots in the base floor. However, the join at the rear is quite noticeable and will require gap filling. The musculature and textures to the legs are very nice, sculpted to the left leg is a detailed skull, lower jaw missing along with a bone and tooth fetish. 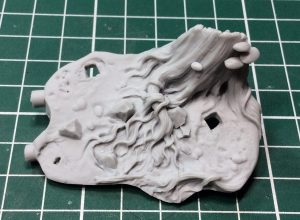 The two legs join to form a flat waistline, there is a shaped groove to accept the peg of the upper torso, the shaman is in anthropomorphic form, when the torso and legs are attached, we see the sculpt is dynamic, with the upper body twisted to the creatures’ right, the head which has in my opinion the appearance of an aquatic monster, similar to those depicted in movies during the 50’s and 60s, such as The Creature from the Black Lagoon, is also turned facing the same direction, elongated neck stretched and arching.

The detailing to the shaman is incredible throughout all the elements, the musculature is believable and well rendered, creating a powerful and dangerous looking creature. The neck displays what looks like a variety of gills and the face is particularly detailed, with spines, frills and sharp teeth. The spines down the neck are repeated throughout the sculpt in one way or another adding balance and a form of realism to the creature.

The left arm attaches perfectly, there is no visible join and the torque around the arm completes the hidden join. The fingers to the hand show attention to detail, knuckles and joints positioned in such a way that it actually has the feel of a shaman or witch, the shaman is clutching a couple of “voodooesque” dolls. 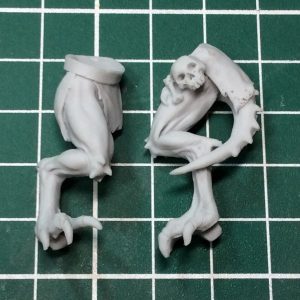 the legs and tail are stylised anthropomorphically

The right arm clutches its’ staff, the join is perfect again, one of the best I have seen, the fit is tight and slots into a natural position, you can “feel” when the arm is positioned correctly.

The staff has nice texture and wood grain engraved within its’ surface and the little spines of bone or tooth are another nice touch to harmonise the staff with the shaman. The right arm as with the left once again shows attention to detail with accurate muscle groups, volumes and fine veins that meander along his forearm and across his hand.

There are some additional parts that can be attached to the staff, the clear resin crystal lamp can be attached at the end of the crook, below this dangles the skeleton of the fish although I can not see an easy solution to affix to the crystal. My gut feeling is that I will not bother will the crystal lamp or indeed the spectral forms. 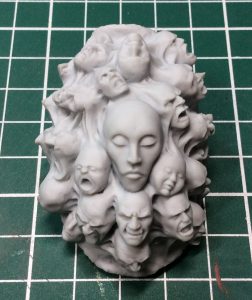 The final part to the kit is stunning in its’ own right, the shell of skulls, there is one central head, smooth and agender in its’ appearance. Actually on closer inspection you realise these are heads and faces, each has it’s own characteristics and are very well sculpted. Rather worryingly there are a couple baby heads too and they have all mostly been sculpted as if they are screaming, in anguish and torment. There is a slot on the inside of the shell that affixes to the large peg on the shaman’s upper back.

The cast is very good, there are some casting plugs that need removing from the lower edge of the shell, the base and some smaller ones also to the arms. There are no mold lines or major defects such as air bubble holes or casting slippages.

The market is awash with fantasy miniatures and new figure companies seem to be popping up at every opportunity, yet for the most part, they are rehashes of the same tried and tested archetypal characters, a barbarian, a wizard, an orc or dwarf, a pirate or some other popular theme. Limbo Miniatures are actually one of very few producers, looking to create original designs, this in my opinion is a brave move, especially for a small, independent business looking to get a foothold in the market.

The design of an anthropomorphic turtle shaman carrying upon his shelled back the tortured souls of his mortal enemies or some such is an original concept and the design considering this imaginative idea is very well balanced and considered. The anatomy shows the tenets of good design in that it is believable and you can imagine the creature shuffling around a swamp or some subterranean environment. I think that it is a particularly original piece and Palacios has done a great job of bringing Zehir to life!

This is a difficult one to answer, I believe that if this was a release from a more established company with a larger fan base this kit would be particularly desirable! However, it is much more difficult to gauge this sort of thing for the smaller companies, I really hope this kit does well because I believe that it could offer the fantasy painter a great canvas for producing a unique and interesting project! 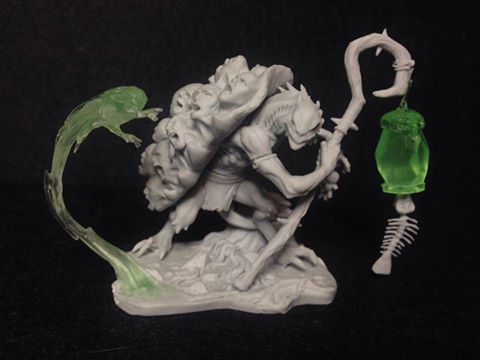 The presentation for Limbo Miniatures could be better in my opinion but again probably comes down to the bottom line. For instance, if the box was adorned with the box art from a well known name, it would probably generate more interest however, the downside for the smaller company though is the cost. It is a fine balancing act between creating interest in the product and controlling costs so that the company can make enough of a profit.

The sculpt and quality of cast along with the name of Joaquin Palacios coupled with the original concept should make this highly desirable.

At $55 this is probably at the top end of what I would pay for this figure, as someone who is heavily involved in the figure community I can understand how difficult it can be to get a company off the ground in this rather niche market. The quality of this kit is worth the $55 and anyone who purchases will be very happy they did so.