This new range of busts has been titled “it busts”, not sure of the reasons behind this, perhaps just because, and come in a rather stunning metal tin adorned with the boxart by Myeong-Ha Hwang. The 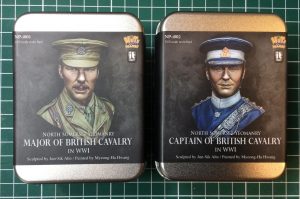 busts are of the classic variety being that of head and shoulders and consist of just three parts, torso, cap and pedestal. These first two releases are both sculpted by the insanely talented Jun Sik Ahn in 1/10 th scale, the kit is cast in polyurethane resin and the pieces are cushioned between layers of foam. Also included is a nice colour scheme card, showing the boxart and a list of the Vallejo paint used for the paintjob.

The sculpts for these busts and indeed the simplicity of the busts on first glance looks basic but on closer inspection the quality and level of accuracy is quite remarkable. I will go into much more detail later about the various elements of the bust but for now let’s just summarise by stating the details are crisp, the undercuts to the various straps and collars and such are sharp, the attention to detail in the uniform is well adhered to and facial features are anatomically accurate and finely rendered.

The cast for the busts is nigh on immaculate. I couldn’t see any defects in the casting whatsoever, no moldlines or air bubble holes. There are however, the remnants of casting plugs along the front lower edge of the torsos and on the caps. Once these are carefully removed, it’s just a case of smoothing, which I will do using fine wet and dry sanding paper. Dry fitting the caps to the top of the flat head, using a plug and socket assembly, shows there will be no need for filling but I would suggest applying firm pressure to the two parts when assembling to ensure a super tight fit. 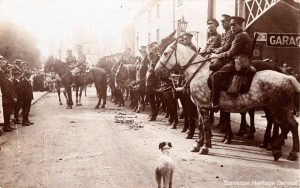 o talk a little about the historical information regarding the Yeomanry and in particular those forces from Somerset. Surprisingly the North Somerset Yeomanry dates back to 1798 in Frome, Somerset and disbanded a few years later only to then be reinstated and united with the East Mendip Corps in 1804; becoming North Somerset Yeomanry Cavalry in 1814.
This regiment had an almost “legendary” reputation, the men were accepted on the back of recommendations from one or usually more existing members and a joining fee was usually paid. They were regularly used to quell riots and were not expected to fight overseas, however it was the onset of World War I and the introduction of the Territorial Forces Act that they began to operate as more than just a Home Defence Force. Although serving overseas did not become compulsory many of the members of Territorial Forces volunteered. Three lines of defence were thus created, here the logistics of the regiment get quite confusing but can be simplified as follows:

3rd line were those, trained soldiers who acted as reserves, replacing casualties of the other two lines.

Those in the first line saw limited combat as cavalry but notably at Second Battle of Ypres, Battle of Loos and at Arras. Trench warfare though ensured during other periods they fought on foot alongside regular infantry in the mud and blood. 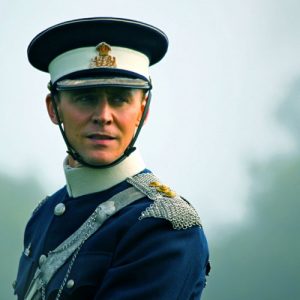 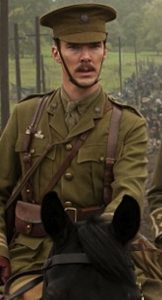 It is clear from the boxart that the sculpts are heavily influenced by the actors Tom Hiddlestone and Benedict Cumberbatch in the film adaptation of the show War Horse. I am happy that NutsPlanet were inspired enough to create these busts because for me I haven’t seen such busts before and the Yeomanry regiments were an interesting historical subject.

I want to talk a little more now about the quality of the sculpting here as I feel it better suited in this section because of the level of design and historical accuracy present.

Starting with the Captain in his “blues”, the material folds are sumptuous, natural creasing und 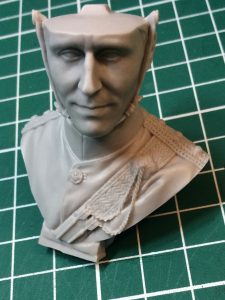 er the chains and across the back of the shoulders. Whilst we are at the back there is a very nice centre seam too. The shoulder chains are immaculately sculpted and display the three “pips” of the Captain.

The cast of the pouched belt which runs underneath the chains and down across the left hand side of the torso, is very crisp and has the distinctive patterning of the zig zag. The chains and pickers are well sculpted too, with the chains having a natural movement and sag to them. The collar has a nice “starched” firmness to it and the top button is a real nice piece of detailing too.

The cap has great material texturing to it at the crown with natural looking creasing and wrinkling. The trimming, which will be picked out in white, is finely rendered and attention to detail is on show once more with the four panels being separated by the crisp seams.

The badge is another precise detail displaying the NSY initials. Inside the cap is the slot for the peg in the top of the head and on either side there are two socket points that will receive the chin strap. In addition the leathers, straps, buckles and buttons are all super sharp details.

The head itself is 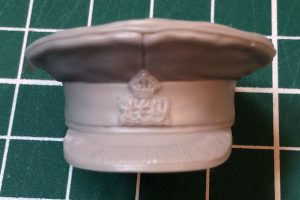 wonderfully sculpted. The various features are flawless and the hair is nicely rendered too with individual clumps of hair. The positioning of the head is such that he looks slightly off centre a
nd to his left whilst the other bust, the major, looks to the right, thus offering a different viewpoint.

The Major is presented in his Service Dress and once more the folds and natural creases are nicely done, especially where the various straps and leathers since the fabric beneath them. Another nice touch is the creasing to the neck tie and to the c 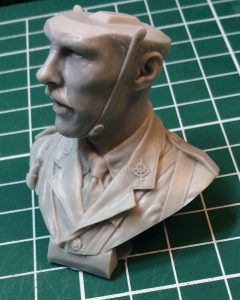 The chain coming down from beneath the right epaulette, attached to the nice looking whistle, is another piece of nice detailing and the pistol lanyard is shown down the right hand side and disappears under the left lapel.

The buttons and badges are nicely detailed and even has the T for Territorial below. The rear of the bust has the nice centre seam present as is the seam that runs along the collar and lapels. The service cap once more, is well sculpted, once again the four panels are separated by seams but this time there are four holes and their “eyelets” , a nice detail but one I’m afraid to report that I don’t know their practical use in real life.

The Majors’ cap has the regimental badge rather than the Captains’ lettering and as before there are “cut outs” or sockets in the side that will accommodate the tip of the chinstrap. 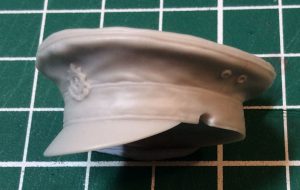 As before the facial features are sculpted with clean lines and are anatomically correct with nice bone structure. The moustache hairs are finely rendered the lines along the top of the nose hint to the frown beneath the caps’ brim.

Both busts at first glance look quite basic but on closer inspection the quality of the sculpt and cast along with the historical accurateness shines through. The detailing to the uniforms and service gear is crisp and finely detailed, the facial features are clearly based on the characters of the movie War Horse and I think these will paint up really nice.

They will look great individually or as a pair on display and I look forward to seeing what the team at Nuts plan to do next. Another point to note is that these 1/10 scale busts could be a great introduction or transition to b 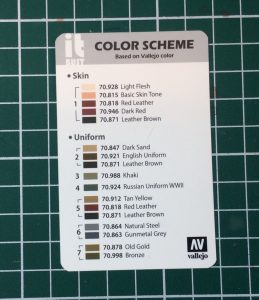 ust painting and the colour chart card is a nice touch that further supports this observation. All of this coupled with someone’s interest in the more obscure military or historical subjects or indeed a love of War Horse make these busts particularly desirable.

Each bust is priced at $50 or approximately £35 and I believe this is a competitive price point when you consider the entire package and the quality of the sculpting and casting.