Tartar Miniatures have been producing a series of releases for the last couple of years now, being fairly eclectic and prolific however, it is the historical releases that for me standout and in particular those of the medieval era.

The kit arrived in a compact, white box adorned with the boxart by Sergey Popovichenko. This is a 15 part, polyurethane resin, 75mm scale figure sculpted by Oleg Pogosian, the parts are all contained in ziplock bags and packaged in bubble wrap for extra protection. Closer inspection reveals some intricate components that make up the strapping for the shield, trigger for the crossbow etc etc, really impressive but also somewhat daunting, as they are small and delicate. 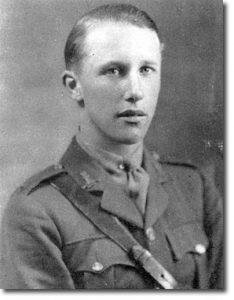 Sir Payne-Gallwey, decorated cavalryman and author of “The Crossbow”

I believe the figure depicts a European crossbow man, the crossbow probably evolved as a small scale, portable form of ancient Greek and/or Roman war machines such as the arbalest for shooting arrows.

The European crossbows possibly introduced for hunting are recorded as far back as the 4th century being depicted in reliefs in France. In certain regions of Asia and China, crossbows were in use since ancient times, recorded as used in the battle of May-ling, China in 341 BC.

Sir Ralph William Frankland-Payne-Gallwey, 3rd Baronet (1848–1916) was an accomplished engineer, historian, ballistics expert, and artist, he wrote a comprehensive history of the crossbow which was republished in 2007, “The Crossbow”.

He speculates that the Crossbow was brought to the British Isles during the Norman invasion of 1066. During the 12th century horn bows were used, copied from the bows of Asia, these were made from a wooden core to which the back was attached a thick layer of sinews.

These soldiers would pull back the string of the crossbow (known as spanning), using stirrups and a locking mechanism. A locking mechanism was generally used so that the string could be pulled back by hand and the bolt loaded, in the groove of the tiller. It was often recorded during the 11th century that the archer would lay down on their backs, with a foot on each of the bows arms and draw the string back towards them, until the bolt was loaded.

As the bows became more powerful, more advanced mechanisms were developed to draw the string. Stirrups were used for one or two feet, both are recorded as being made at the Tower of London in the late XIII Century. 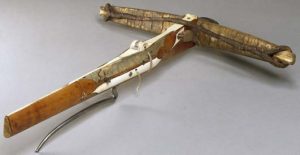 a real life version of the crossbow seen on our figure

In the latter half of the twelfth century the spanning or Samson belt was developed, which consists of a hook attached to a belt, where the crossbow is turned with the groove towards the user, one foot is placed in the stirrup, the user bends over or goes down on one knee, and the claws of the spanning hook are put over the string, the user straightens or stands up using their body to pull the string back.

The Spanning belt was popular and used into and throughout the 14th and 15th centuries. Payne-Gallwey described shooting a 15th century Siege bow of 3 foot 2 inches length, with a bolt 3 ounces in weight and 14 inches in length, a distance of 460 yards. At 60 yards he sent a bolt right through a deal plank 3/4 in. thick. The total weight required to draw the string of its bow 7 inches using its portable windlass was 1,200 pounds, or over half a ton!

Spanning the crossbow took time and effort and so its’ use was most effective when used in cover as they were often vulnerable to return missiles, either from inside a building or when on the field of battle, behind shields known as Storm Shields or Pavise.

These were large enough for the crossbowmen to shelter behind and to span the crossbow after firing. Some forms of Pavise had holes to view from or even a slot to fire their bolts from. As well as being used in large battles, they also allowed crossbowmen to attempt approaches to fortifications that were under siege. In the 15th Century the Pavise was built with a central ridge that strengthened the shield.

First impressions are very good but I still have not figured what some of the extra small parts are for or how to attach them, there is a length of strap to attach to the rear of the shield and there is a small trigger for the crossbow, there is hole in the stock to accept this piece, the two other small pieces I still have not determined. Perhaps they are also for the shield. 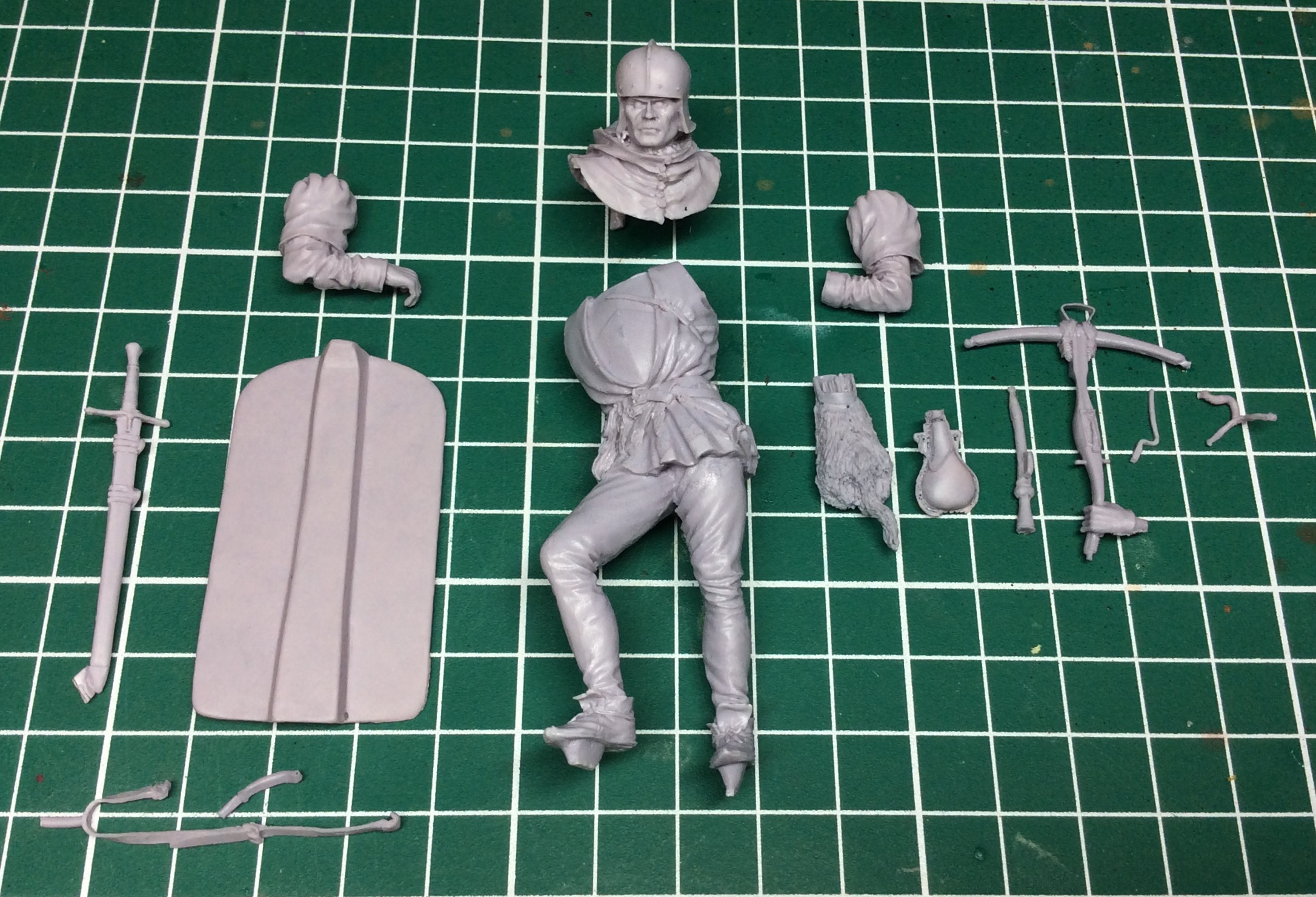 The main piece consists of torso and legs, head, arms and then the extras such as sword, quiver etc all attach via peg and hole assemblies. The level of detailing to the sculpt is incredible, Oleg has done a wonderful job and to an untrained eye it looks historically accurate. 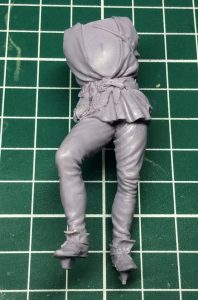 lots of different garments and armour

The torso shows armoured cuirass, worn under a long sleeved tunic, over this we have an open necked short sleeved tunic belted at the waist, finishing the upper dress we have the hooded neck scarf. The creasing and folds to the clothing is perfectly rendered and not over done, it has a very natural feel to the whole sculpt.

The belt cinches the waist tightly and the various straps show sharp undercuts, the pouches show attention to detail with buckles, buttons and tie cords. 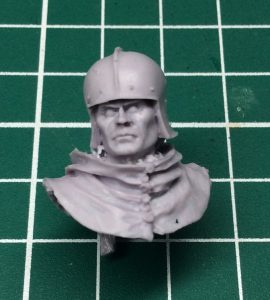 The slender sword is scabbarded and attached to the left hip, the straps sculpted to the torso line up perfectly to the scabbard. The leggings again show nice creasing and folds and are tucked into soft, moccasin type shoes, the tongue that sits over the top of the tied laces is another nice touch.

The head displays great facial details, this should be really nice to paint, nice volumes and structure and the helm, a Sallet, is very nicely and accurately detailed. Although there is no indication of the origins of this figure, I have a feeling he is perhaps from Italy or Germany, both countries during the XV Century wore similar garments and the Sallet was known to have developed in Italy. 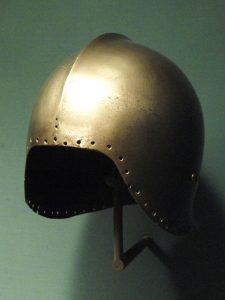 In essence the earliest Sallets were a variant of the bascinet and were intended to be worn without an aventail or visor. The removal of these elements meant they were in far better position to accurately aim their weapons but they lost protection to the face, to counteract this the sides were drawn forward at the bottom to cover the cheeks and chin and the rear was curved out into a flange to protect the neck. The head fits snugly to the hole in the torso and the hood sits tight over the strap sculpted to the cuirass.

The depth of the folds to the fabric on the arms is realistic, both arms fit perfectly and do not need gap filling. The left arm, bent at the elbow is positioned so as to carry the crossbow over the left shoulder. The hand which is sculpted to the weapon is pegged and dry fitting shows a perfect join.

On first glance it looks like the figure is just leaning upon the shield, balanced on the ground. The fact is though, that these shield had large spikes attached to the bottom that were pushed into the ground, this means that they were held in place, whilst the archer was able to span and fire their crossbows from safety. 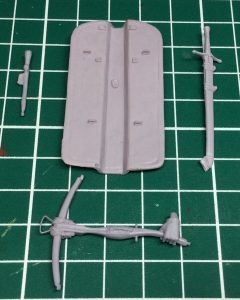 the weaponry of the Crossbow man

Finally we have the scenic base, basic but effective, with a raised area for the right foot to sit upon, holes in the base to accept the pegs of the feet and a ridge for the shield to sit in. The cast is very nice, minimal clean up with some excess pieces of resin that need cutting and filing smooth. There is a little damage to the stitched edging of the water bottle (?) along its’ bottom edge but with a little bit of sanding it should be alright, due to its’ position it will more than likely go unnoticed.

The design of the figure is well considered and balanced, the pose is natural and not forced. It is quite easy to imagine a crossbow man taking a rest after a siege or battle, leaning on his shield, weapon cocked over the shoulder.

The detailing is particularly good throughout and the intricate workings of the crossbow are particularly well done. Tartar Miniatures continue to release figures of the medieval ages that frankly I don’t see too many other companies doing, there subjects are well chosen and researched, the work of the collaborative artists is first class.

The sculpt and cast along with the rather original subject matter should ensure that this kit is particularly desirable to the historical figure painters, it has an earthy and gritty realism that really appeals to me. To me it shows the human spirit behind these military men, the resolve and determination in almost unthinkable conditions and situations. 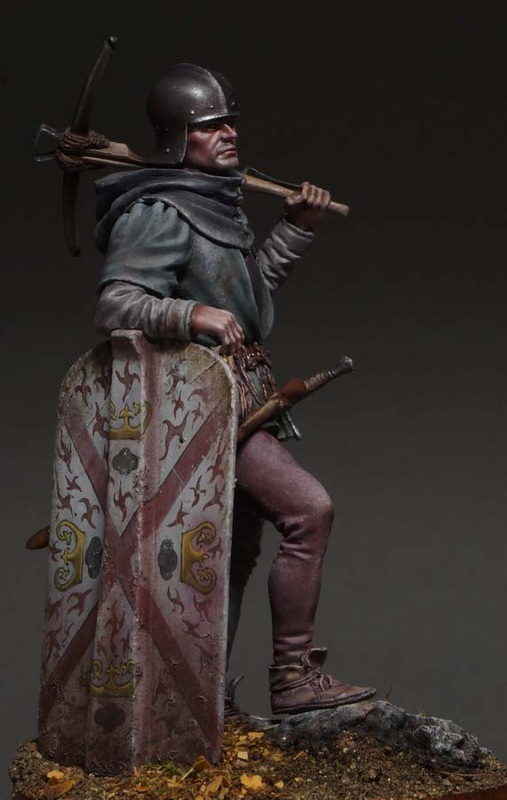 One issue I have with the release, is not actually to do with the kit but the photography, the boxart images on the internet are stunning. Sergey Popovichenko has painted a beautiful piece, yet the image on the boxart has distorted the colours and the detailing seems washed out.

At £33 I believe this is great value for a high quality 75mm figure. I don’t think there are that many if any better figures of this genre and subject matter on the market at this price point. Highly recommended figure and great value for money.