MJ Miniatures since 2013 has predominantly focused on busts, but this release sees something a little special, a large 1/16th scale, six part, polyurethane resin full figure depicting a U.S. Tanker from WWII. The resin in recent releases has began arriving with a pinkish hue to the material and the quality of it is very good indeed. This kit also sees two head options. The kit arrived in a plain, brown cardboard box adorned with the boxart by MJ himself, inside we find the parts sealed in ziplock bags  and protected by pockets of bubblewrap. This is a straightforward kit to assemble and first impressions are very good! 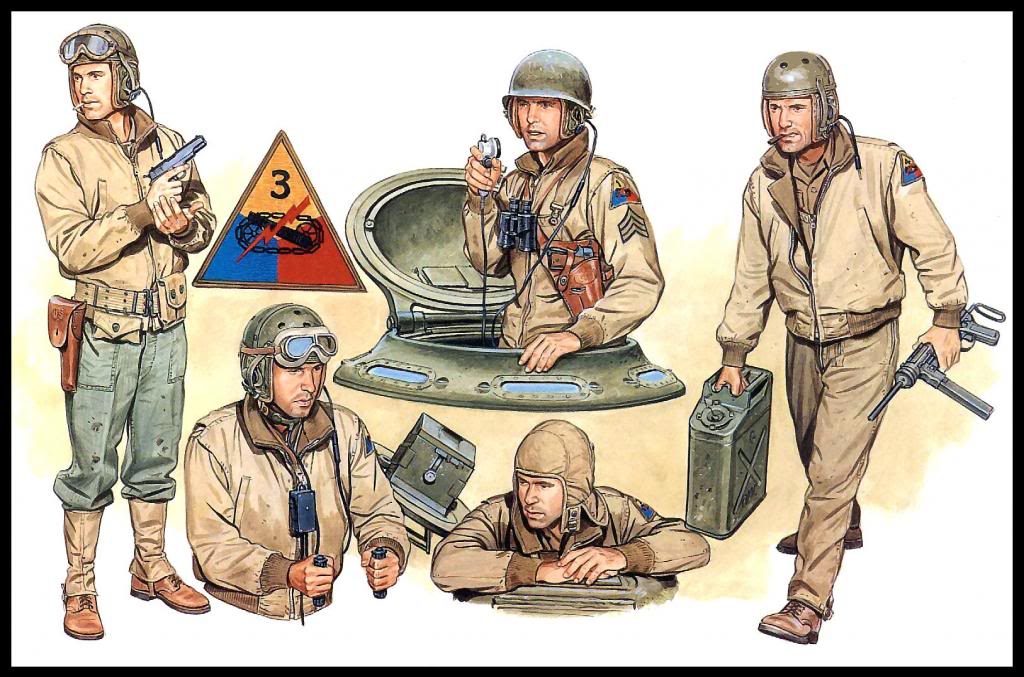 illustration showing uniform and weapons of the U.S. tank crew

Prior to World War II, especially in the early days of tank development, the tank had a large crew, as many as eighteen men were needed for the German A7V, and often teams of eight were considered necessary with most heavy tanks that saw action during World War I. In lighter tanks however, there could be as few as two men operating the the tank, such as the tiny French Renault FT 17 and the same tank was adapted to be a Two-Man fighting machine from America.

However, as the art of tank battle and indeed the simultaneous development of tank design throughout WWI and into World War II the average-sized tank would be operated by a crew of four men: a driver, a gunner, a gun-loader/radio operator and a tank commander, all working as a team in their designated positions within the tank.

The driver was at the front, usually peering from a little viewing hatch or the escape hatch in front of him, slightly to the right. The drive would normally take control of a forward-pointing machinegun, which in larger crews would be manned by a fifth crewman, or co-driver. 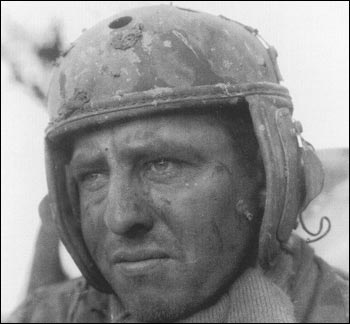 The rest of the crew were located within the fighting compartment, usually with access to their own individual escape hatches. The Commander would direct the movements of the tank liaise and communicate with other Commanders within the group of tanks. The gunner would aim and fire the main weapon of the tank and the loader would whilst following the orders of the Commander, choose and load the correct ammunition – usually high explosive (HE) for enemy troops and buildings etc, or armour piercing (AP) for other tanks and armoured fighting vehicles (AFVs).

By World War II the dangerous confines of the tank were slightly better as the armour was impervious to bullets, made from cast shapes instead of riveted plates of metal, although a direct hit from an Armour Piercing round could still “kill” however, the commander was often in considerable danger as he spent most of his time, head emerged from the tank, using binoculars and communicating to other tank commanders, within his group or platoon.

The Winter Combat Uniform was developed in 1941 for issue to crews of armoured vehicles. The uniform consisted of a cloth helmet, a jacket and overalls. All three garments were made from olive drab #3 cotton twill and lined with brown jersey wool. Although these garments were designed for armoured vehicle crews, troops in all branches of the service endeavoured to acquire them as Europe was cold and wet, and this uniform was far superior to the fair-weather M41 Field Jacket. The jackets were particularly popular and many were obtained by any means necessary by infantrymen, artillerymen and paratroopers. Thus, there is every chance and would be historically correct for nearly any member of the US Armed Forces to wear Winter Combat Uniforms or elements thereof even if there wasn’t a Sherman for miles around. 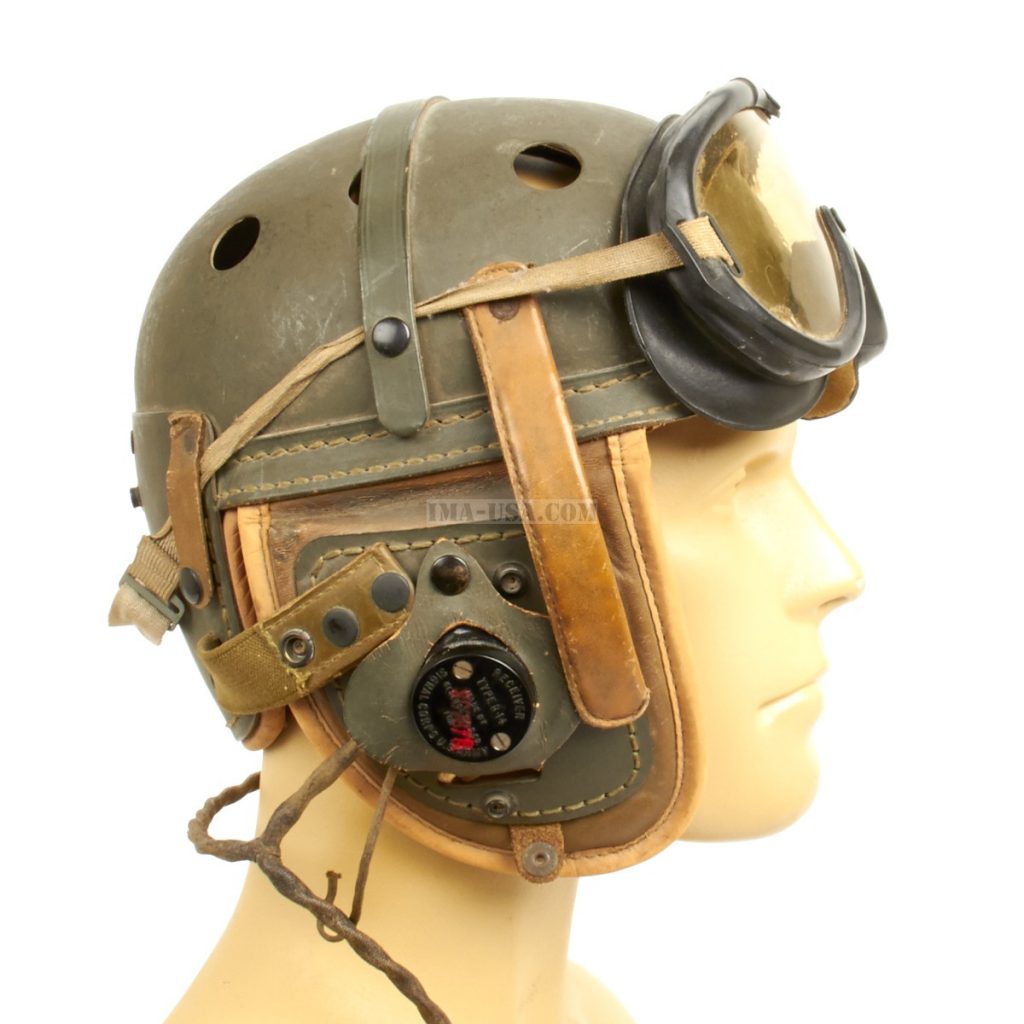 A three-person design team at Rawlings headed up the project of creating protective headgear for tank crew, and on 1 May 1941 they filed a patent for what was simply called a “Tank Helmet.” Much later, this style of tank helmet was designated “M-1938” in reference to the year of the initiation of the project. This alpha-numeric designation does not commonly appear in wartime documentation.

As stated in the patent application, the primary design objectives of the Tank Helmet were to provide:

www.big-red-one.org state “The most distinctive new feature of the M-1938 tanker helmet relative to the previous versions was the leather ear flap assembly. The ear flap extended well below the wearers ear and contained an ingenious flexible housing for retaining the ear phones in their proper position. The ear phones fit into a slot in the leather flap, and a thin leather fastening piece snapped over the ear phone to hold it in place.

This leather fastening piece could be adjusted forward or backward via three metal snap fasteners to position the ear phone directly over the users ears. A curved leather-covered metal spring arm extended downward from the helmets fiber shell and exerted tension on the ear phone to hold the ear flap assembly snugly against the users ear. The spring arm was mounted on a swivel to allow it to be placed in a variety of positions, depending upon the users needs and accessory equipment”.

Strangely the helmet was not part of an individual’s gear but was in fact assigned with the tank, so for instance the M4 and M4A-1 Sherman Tanks were allocated five helmets, each of a differing size.

The main part consists of torso and legs. It looks to be particularly accurate throughout, the jacket shows the correct detailing, displaying the woolen interior around the collar, the double breasted pockets, central zip and elasticated sections to the cuffs and hips. Under this we can see the collar of the combat shirt, the jacket shows nice volumes, side seams and shallow creasing and folds. 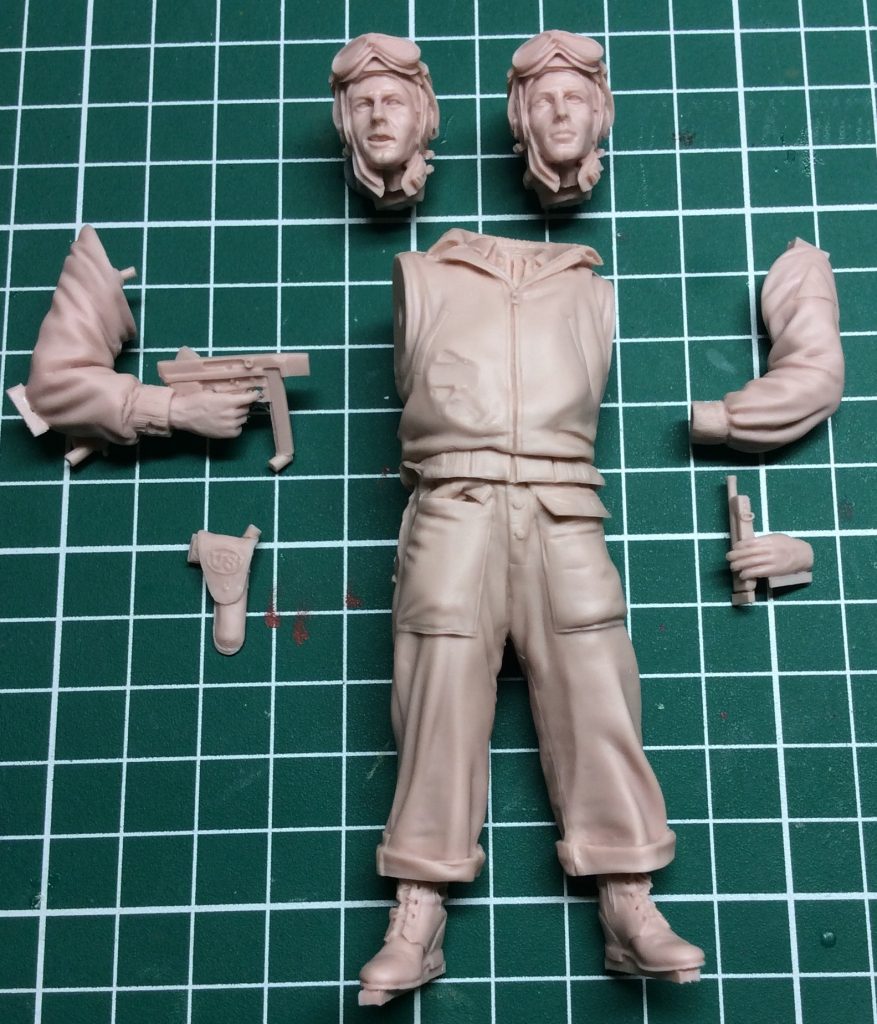 The combat trousers show some really nice touches such as the right pocket flap being folded inwards, the folded over zipper that is buttoned up and the length of trouser rolled up with the straps holding them in place. The left pocket is shown unbuttoned, button hole nicely rendered. The thick and deep folds and creases are naturally done and hint at the heavy duty material used. The boots are a really nice piece of sculpting, with crisp detailing to the ankle padding, heel support and the laces.

the reverse shows the great folds

The left arm carries the machine gun and the right arm carries the muzzle of the same weapon, the parts joining together nicely. Once more the folds and creases are nicely done, the elasticated and ribbed cuffs are a nice detail too and the left arm sports the armoured regiments insignia, the triangle with space designated for the units denomination. The detailing to the weapon is fine and delicate. We also have the holster and hand gun too which attaches via a peg and hole assembly to the right hip, though sometimes tank crew carried theirs in a shoulder holster.

The part that steals the show though for me in the head and the tank helmet. We had discussed this quite a lot above in the historical reference and all I want to say here is that the detailing is nice and it looks reasonably historically accurate. We have two heads which are nigh on identical other than the facial expression which is another nice touch to this kit.

The helm is the M1938 although looking at the goggles I believe these may be those with the yellow tinted lenses which were issued closer to the end of WWII and were called the Polaroid M – 1944 goggles. The detailing is crisp and accurate, the various straps showing sharp undercuts.

The casting is done in-house by the studio and is of a high quality although there are some extensive mold lines down the sides of the jacket that go part way down the outside of the legs too. There are no major defects such as air bubble holes or casting slippages. 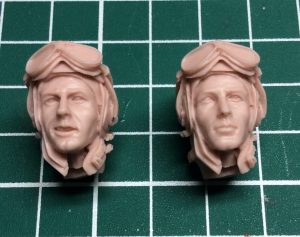 There is a very nice balance to this figure, legs wide at shoulder width, feet planted firmly on the floor, with the weapon held across the stomach. The introduction of the choice of heads is a nice touch and adds considerable flexibility. The pose is rather static but will provide the painter with a great canvas with large open spaces and beautiful folds and creases to the uniform.

There are not many options on the market to buy a figure of this size and quality relating to this type of subject so is a particularly original kit. The kit looks like something straight out of the 2014 movie Fury starring Brad Pitt and could easily be painted using stills from the movie as inspiration.

This kit will obviously appeal to the military and historical painters but also to any painter that wishes to develop his skills focusing on textures and materials. An idea I had when looking at this kit was that the spare head would make an excellent exercise in painting faces especially if you are looking at practising texture, scars, stubble etc. 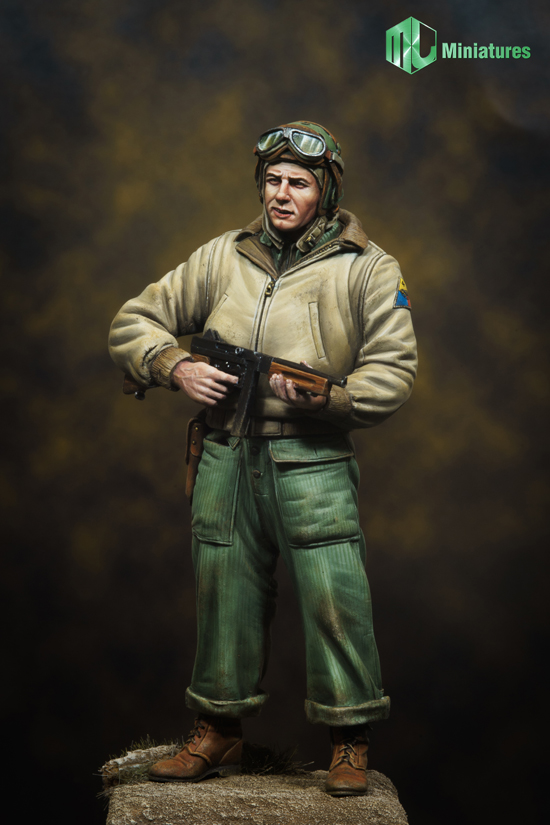 At $50 I think this kit represents great value for money, assembly is straight forward and so you will soon be painting! This figure stands approximately 115mm in height and truly represents a big project, this would be a lot of fun!