I am a big fan of the painting of Ben Komets and when he started up his own range of figures I was right to be excited! This latest release sees a collaboration with two powerhouse creative talents, Felideus Bubastis as concept Artist and the ever popular and uber talented sculptor Lucas Penichet! We present the Wizard of Agni!

The kit is 1/12 in scale and consists of 10 polyurethane resin parts, having arrived in a sturdy hand crafted, hinged wooden box. The smaller parts are sealed in ziplock bags and all wrapped in black tissue paper, there is not enough room inside the box to use bubble wrap but thankfully mine arrived with no damage. The kit also comes with an illustrated postcard, concept art card and a rather “snazzy” metallic foil sticker. 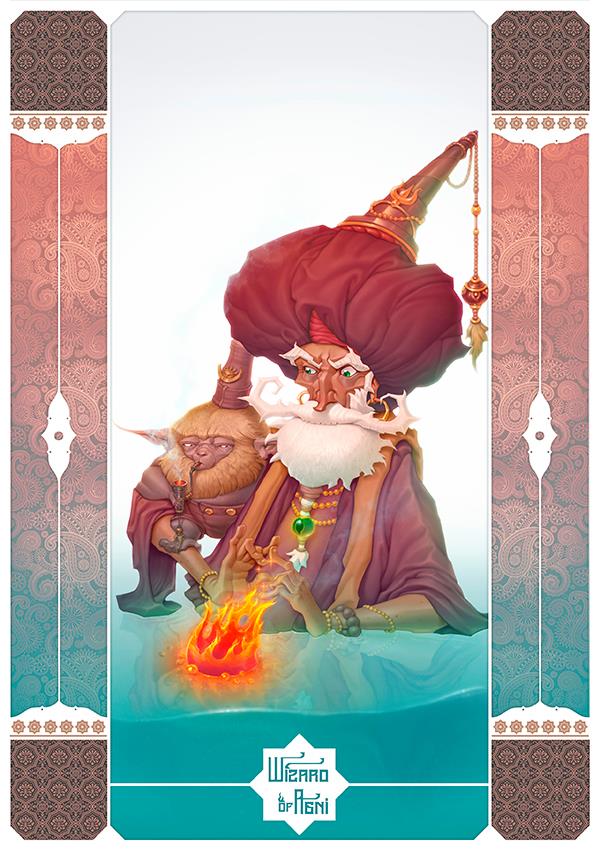 There are two main parts of the bust, the head and the torso of the wizard, then it is a case of attaching the various smaller arts. As soon as you look at the sculpt you can see the trademark works. Lucas always pays particular attention to the character of the piece, the narrative, the atmosphere and as always as poured his love and passion for sculpting into the face and hands, the two most personal aspects of any sculpt. 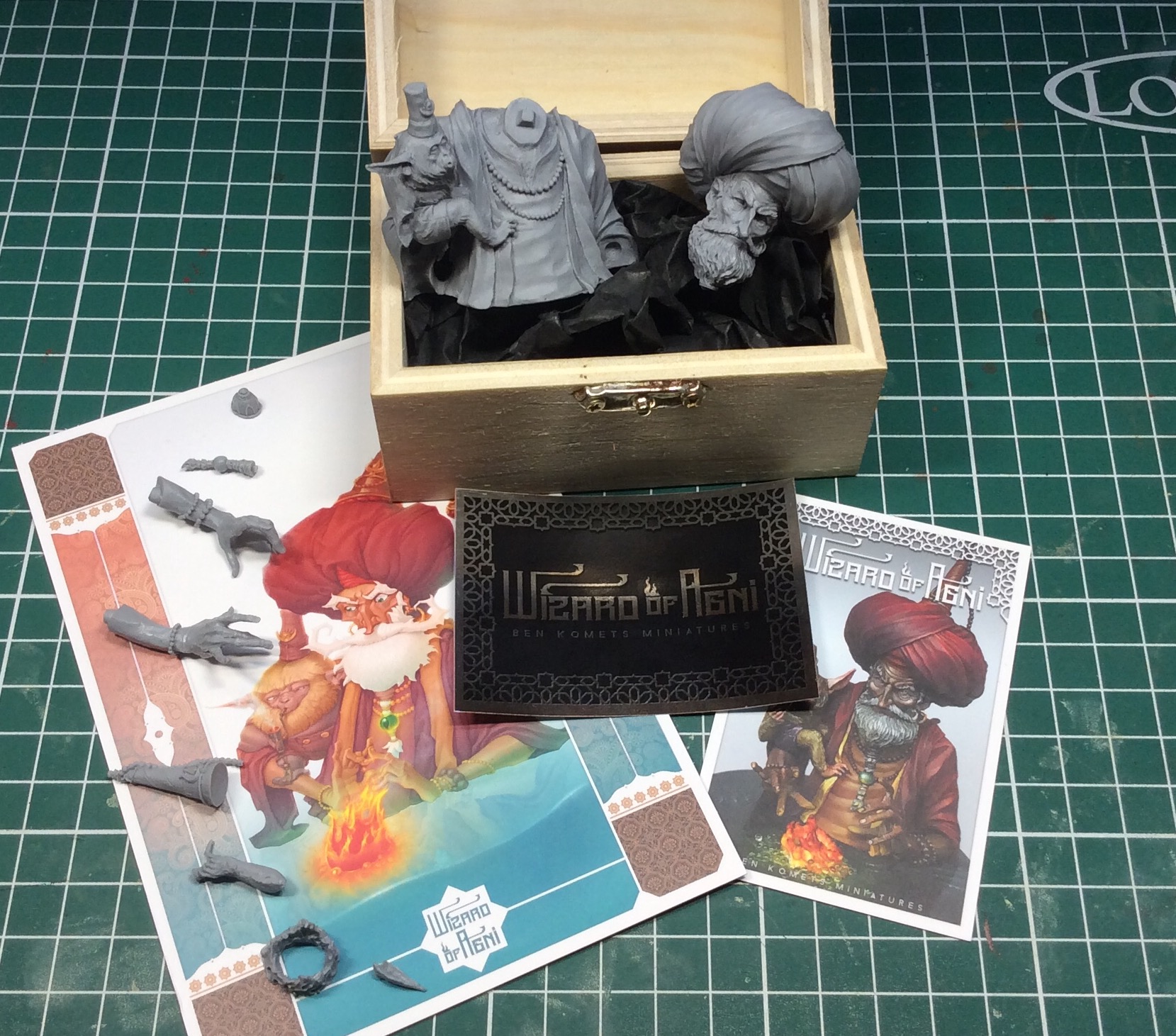 The head is full of textures and angular anatomy, although quirky there is also an element of seriousness, wisdom and power to our Wizard. The wizards’ face is weather beaten, skin like leather with hooded brows and a long hawk nose. The beard and moustache are particularly enigmatic looking and exaggerated. 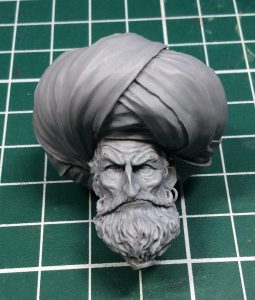 such an enigmatic character

The head attaches to the torso via a square peg and hole assemble and dry fitting shows that you may need to add a putty wash just to fill in the tiniest little gap. The turban is wonderfully crafted with nice, natural looking folds to the fabric.

The torso has monkey sculpted to the right arm with holes to receive the various parts. There are some clever details here for instance, the left ear of the monkey has been cut for casting, this allows for easier painting to the monkey and also to the side of the wizard.

Another nice touch and attention to detail is at the nape of the neck where he has sculpted some of the beaded necklace poking our from under the collar of the under shirt. The hooded tunic shows nice folds and creases and beneath this we can see a glimpse of the waistcoat and beneath this the woollen undershirt. The bead necklaces continue to build up the impression of our mystical lord. 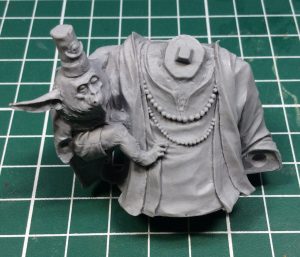 the torso and monkey

The smaller parts really add a lot of narrative and define the character of the sculpt, first up we have the decorative cone that sits atop the turban. The length of beaded chain from its’ apex needs to be carefully heated and the chain shaped so that it connects with the bauble and tassel sculpted to the turban. We also have a decorative topper to attach to the end of the hood, it is nicely embossed with intricate detailing.

Then there is the braided length of beard that is studded with charms and beads, this attaches via a small hole in the base of the beard. Moving on to the monkey we find, the ear that attaches to the flat surface of the cut.

The arm of the monkey carrying the little pipe attaches via a pin and again, take a look at the fingers and see the attention that Lucas pays to them. There is a circlet of flames the result of the wizards powerful magic, the sculpting is realistic and delicate.

Finally we have the wizards’ arms and hands and these are a work of art all by themselves. The attention to the anatomy and mechanics of the fingers and how they move is first class. The length of the fingers somehow adds to the mystical feel of the sculpt and details such as veins, bones, knuckles, finger nails all hint to the attention he places in the sculpting of the hands and face as we discussed earlier.

The cast is again of the highest quality, a little clean up is required here and there followed by a bath in some soapy water but there are no major defects such as air bubble holes or casting slippages. 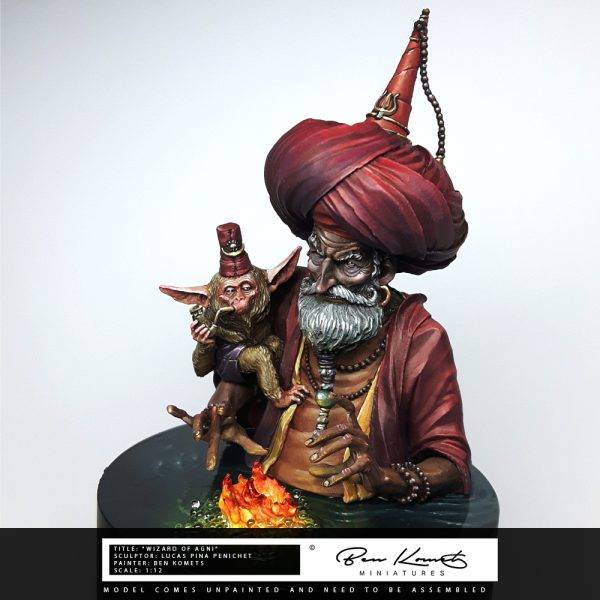 the boxart by ben komets

The design of the figure is well thought out and adheres to the wonderful concept art by Felideus! It is a well considered and balanced bust, with a nice composition that is pleasing to the eye. There are a lot of textures that will make the painting process a lot of fun, from the materials, fur, hair, flames and decorative embellishments. The sculpt is expressive and charming with a wealth of opportunities to paint your own version in your own style. At time of writing this kit only had 30 or so left, his previous release has now SOLD OUT twice over and there was talk that neither will become available again, so if you want yours, you better act quick!

“The Wizard of Agni is a powerful mage. To prove how mighty his ancient gods are, the wizard is casting a fire spell directly on the water surface of the swamp…making the water boil around the magic fire. He his accompanied by Kalif Eekfred, an Ifrit monkey, half-monkey half-gremlin, who loves to smoke tasteful herbs in his magic turkish pipe”.

such attention to the hands

I can see already how well received this little bust was and it will appeal to painters and collectors, not only that, the manner in which Lucas creates these characters, you could paint this bust either as a fantasy piece or one based a little more historically. The work of Lucas is always incredibly sought after, many of his works are sold out and this one I believe will follow suit shortly. The combination of the concept art, the sculpt and the ever growing fan base of Ben Komets should see this release go down as another success!

When we consider the sculpt, cast and presentation along with the trio of creative geniuses involved in this project, the price of €55 offers good value for money. For us patrons of Bens’ Patreon account we have the 3 hour video of the painting process for this bust, those that aren’t can purchase the bundle, which includes the video for an extra €15.