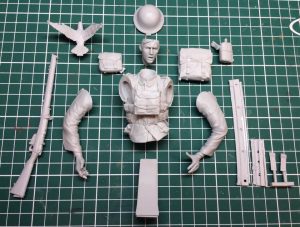 It depicts a soldier of the Duke of Wellington Regiment during World War I and is part of a range titled “British Army Great War Series”.

The pieces come in ziplock bags, wrapped in bubble wrap, securely packaged in a sturdy box adorned with the box art by Dae-Hyoung Kim. On the front we have the main studio picture, the reverse shows four additional angles.

The Duke of Wellington Regiment (West Riding), was an infantry regiment forming part of the Kings Division of the British Army. In 1702 Colonel George Hastings (son of Theophilus Hastings), 8th Earl of Huntingdon was given the order to create a new regiment, with each successive colonel, the name was changed until in 1751 regiments were allocated numbers instead. Between 1751 and 1782 was known as 33rd regiment of foot and thereafter was officially titled  33rd (or First Yorkshire West Riding) Regiment.

The then Colonel of the Regiment, Lord Cornwallis wrote “The 33rd Regiment of Infantry has always recruited in the West Riding and has a very good interest and the general goodwill of the people in that part of the country: I should therefore wish not only to be permitted to recruit in that county, but that my Regiment may bear the name of the 33rd or West Yorkshire Regiment”. 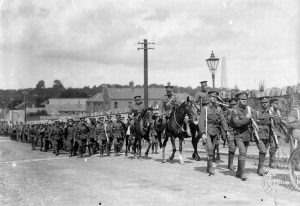 The 2nd battalion mobilising from Ireland in 1914

Seventy years later, the first Duke of Wellington died and in 1853, Queen Victoria ordered their title be changed to the 33rd (or The Duke of Wellingtons) Regiment in recognition of the regiments long standing association with the Duke.

Several battalions were eventually formed seeing action between them in Green Spring, Flanders, India, Battle of Quatre, Waterloo, Crimeas and the East African nation of Ethopia (formerly known as Abyssinia).

Indeed it was the 2nd battalion that landed at Le Havre as part of 13th Brigade, 5th Division in 1914. These would see service on the Western Front. They saw action at some of the most famous and bloody battles including  Le Cateau,  Marne,  Aisne,  Hill 60 and the brutal first Battle of Ypres.

The sculpt is really nice, I’m not just talking about details, historical accuracy and good design either, it’s also a very emotive and expressive sculpt, even more so considering this is a bust. This is a fitting tribute to all the animals that served during the Great War. 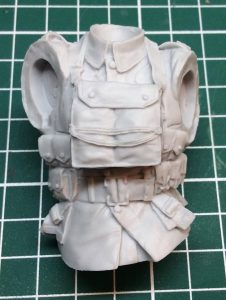 Our soldier is depicted wearing his full 08 webbing and the accompanying pouches. Some nice attention to detail here as not all pouches merely had button fastenings, some particularly those used to carry additional ammo, have been sculpted with straps and buckles. The waist belt and straps all show the correct brass fittings and endings to the end of the straps.

There are nice folds and creases where the webbing cinches the fabric of the jacket underneath. Straps show relatively sharp undercuts and  everything is where it should be. At the front, upon the soldiers chest, we have the box respirator, again with nice, accurate detailing. 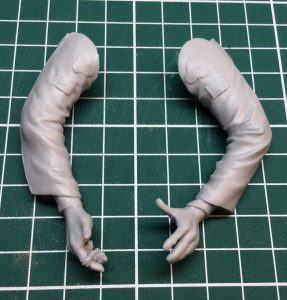 Nice accurate detailing to the sleeves

Two additional pieces of equipment, water bottle and carrier and a hip haversack. All parts are attached via pins and the haversack and water bottle fit snugly, lining up with their corresponding straps on the torso. The backpack fits snugly up to its straps, displaying nice touches such as the folded blanket beneath the flap, the dimpled stitching where straps are attached to the flap and nice bulges in the fabric, giving the impression of the weight of its contents.

The epaulettes are very nice too with the Dukes badge and the word Wellington, and yes you can actually discern each and every letter. All of this so far looks to be of the correct thickness, width and length, regarding the straps and belts etc.

Moving on to the arms now and the shoulders of which sport the brigade and divisional badges. There’s a nice seam to the backs of the arm-sleeves that meander slightly to follow the twist and bend of the arm.

The creases and folds look natural and realistic too. The hands are wonderfully sculpted with the right hand detailed with the feet of our messenger pigeon, which fit snugly to the birds body via pin and hole assembly with no issues whatsoever. 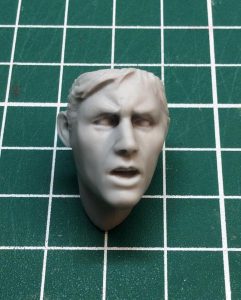 The fine and expressive facial features

The head depicts a young, tired soldier, but one in my opinion who still has the look of hope. The ears are accurately rendered with a nice strong nose. His eyes seem wide open as is the mouth, tiny teeth showing, perhaps he is in the midst of wishing the pigeon safe journey carrying the message. There are nice locks of hair sweeping across his temples and tucked loosely behind his ears.

The helmet is nicely shaped, studs to the rim and apex with the liner present inside. Sits nicely to the top of the head, the rear of the helmet interior is sloped so there is no chance of incorrectly fitting this.

A nice opportunity to talk about the various loose strap parts. The straps for the helmet and rifle are nicely detailed and to scale but removing them from their supports could be tricky as will heating them int shape and attaching them. 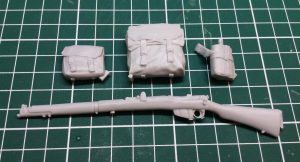 The Lee Enfield rifle is nicely sculpted although my first thought were it looked a little on the large side, with nice detailing to cocking mechanism, trigger guard, magazine and the folded down sights. Finally a few words about the pigeon. Wings are aloft, tail feathers spread out, chest thrust out and head held aloft, just about to take flight. The feathers are nicely rendered and the anatomy throughout looks spot on.

The cast by Dae-Hyoung Kim himself, is pretty flawless, there are no moldlines, air bubble holes or casting slippage. All the details and textures are sharply captured and the preparation and build should be relatively straight forward. Dry fitting of the parts indicate there wont be a need to do and gap filling. Quite a few of the parts have excess blocks of resin which will need removal and filing smooth.

Overall quality of the sculpt and cast is phenomenal.

As I mentioned earlier design and composition works really well invokes into a  bust an incredible amount of storytelling and dynamism. There aren’t that many of these types of kits about and I am particularly impressed with the subject of this piece. For me and what I have seen within our hobby this is a surprisingly original sculpt. 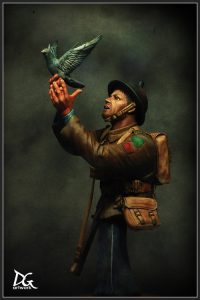 Another angle of the boxart

For those with an historical and /or military interest I an only guess how excited they are at this type of release. For other figure painters, they may be attracted by the story, the pose, the composition etc whichever way you look at it, the quality of the sculpt, cast composition and subject matter, make this in my opinion a desirable kit.

Always a question of desire, disposable income and priorities but I always try to look at it from a “is this worth the money” point of view. At 70$ or equivalent to a little short of £50, this is probably at the higher end of the kits that I personally can afford. However, the sculpt, cast, subject matter and overall presentation make this a worthwhile investment.