This is the second large release from the Ghost Company series of figures following on from Humanoid and Dog set. This is a 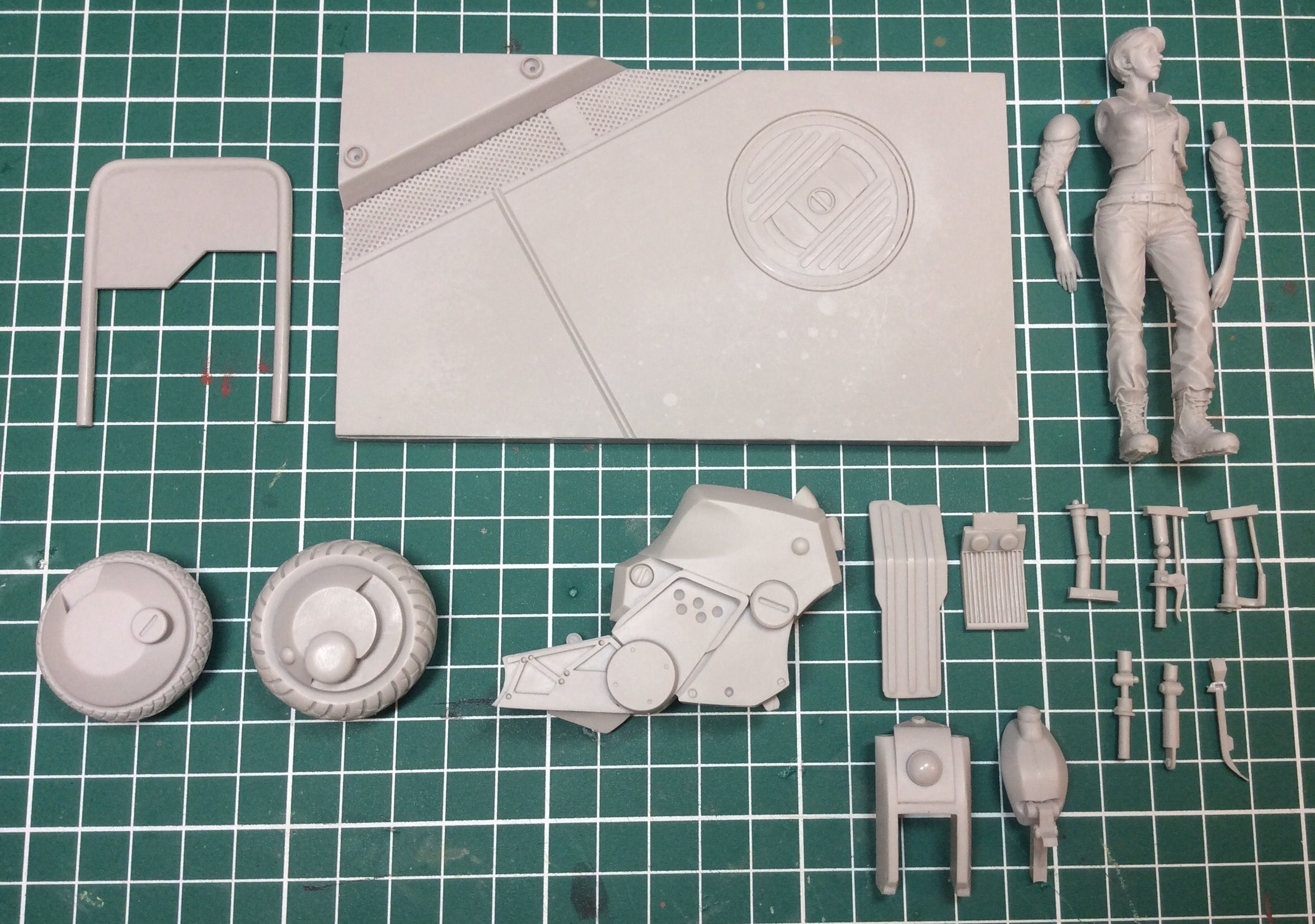 highly detailed, complex, 1/20 scale, polyurethane resin kit comprising of seventeen parts plus the scenic base. The kit arrived safely packaged in a surprisingly large, black cardboard box adorned with the incredible boxart by Ki Yeol Yoon. The kit consists of Violet and her two wheeled futuristic bike. They can also be purchased individually.

Ki Yeol Yoon is rapidly becoming the name when we discuss 3D sculpting within our hobby and for good reason too. However, this particular kit was all sculpted by hand in the traditional method! The futuristic concept for this piece boast a  high level of design.

The sculpting is sumptuous and modern and the cast is nigh on perfect but certain issues will be discussed further along.

Violet herself is wonderfully sculpted and full of crisp details. It’s the attention to detail that always shines through though; the seams and naturally occurring flows and creases to the protective trousers, the slightly unl 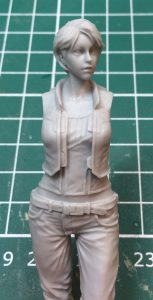 Some more nice touches are the buttons to the tabs that hold the sleeves in place when rolled up and the integrated shoulder pads. The arms are attached via a triangular plug and socket assembly and it’s immediately obvious that there will be no need for gap filling.

The sculpt of the face, neck and hands is clean and anatomically correct regarding proportions and depict fine, delicate details (including facial features and fingers). It is also a pleasant change that our subject isn’t a “scantily clad babe” but a powerful and composed heroine suitably clothed and designed.

Despite how well it is sculpted I feel a little let down with the pose. It’s particularly static and I see no easy way to alter the positioning of any of the limbs. A helm of some description either as an alternative head or maybe carried under the arm could have been a nice touch too.

The base itself is basic but its composition and design perfectly complements the overall piece.

The casting is clean, crisp and predominantly devoid of any deficiencies. Each of the details described above in the sculpt are rendered with nice undercuts to belts, pockets, the light weight armour and even the boot laces. 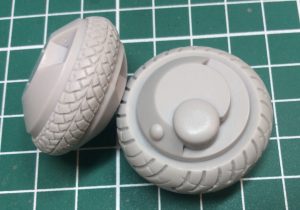 and there are several casting plugs to many of the parts of the auto-mobile.

Indeed some could prove quite problematic, the large ones on the wheels thankfully are located so that when attached to the bike are resting directly on the floor and thus hidden from view. This is well thought out as I couldn’t see a way of removing and cleaning these without removing or defacing the detail to the tyre tread.

The three plug remnants however, at the top of the fuel tank where the handlebars are attached, may prove particularly tricky to remove and clean up.

I would suggest trimming them some distance from the part before extensive, careful sanding so as not to “blur” the straight, crisp lines of the fuel tank.

Good design is paramount, in the sense that it has to work and that the separate elements are able to perform particular functions. There is nothing in this sculpt that would suggest this design would not work. The shape and size suggest that Violet would indeed be able to ride it, the chunky wheels aren’t so large that they wouldn’t work, the encased engine and fuel tank look feasible also.

The manner in which the wheels are attached is again a slight twist on today’s’ design and there are some nice touches such as the streamlined headlights and indicators. I like the minimalistic, clean design of this piece and it fits very nicely within the realm of Ghost Company. 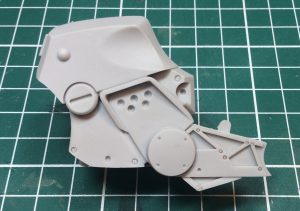 The automobiles’ sleek curves, crisp lines and modern twists creates a wonderfully futuristic item that somehow remains entrenched within contemporary auto-mobile design. The “motorbike” shape actually reminds me of scratchbuilt “rat bikes” with a futuristic influence that wouldn’t look out of place in productions such as Bladerunner, Ghost in the Shell or even Akira. When I dry assembled the vehicle the design struck me as being very believable.

The design of Violet is perfect as well, a very believable character, nothing too over the top.

For me there is no question that this is a desirable kit, the design, sculpt and cast are first class. NutsPlanet across their various ranges are really beginning to create quite a name for themselves! This kit although grounded within the sci-fi genre of modelling could quite easily be incorporated into the mecha genre, perhaps an ambitious diorama or vignette.

There are so many options available with the kit and i suspect it could be interpreted in so many different ways. Could be very interesting to see it weathered and well used rather than all clean a
nd shiny new as per the boxart.

At $150 this is a premium kit and I would imagine a lot of beginner-intermediate figure painters may be put off and dubious if they could do this fantastic kit justice. However, as i am told so many times in my journey to become a better painter, a) its only a kit and b) you cant improve unless you make the jump! In my opinion this isn’t the more affordable piece yet that doesn’t mean that the price point isn’t justified.