The team continues it’s collaboration with our our little brother from Korea Dae-Hyeong Kim and DG Artwork. The latest batch of releases sees in a new era of higher quality packaging, a black wraparound box, with foam layers and sleek boxart photography to the lid and bottom showing multiple views of key elements of the figure.

This particular release is super dynamic, almost a complete vignette in one box, I believe the scale to be too big for 54mm and maybe a little small for a true 75mm, yet is still an imposing kit when fully assembled. It consists of 13 polyurethane resin parts, the small parts sealed in ziplock bags and all safely nestled between layers of foam, first impressions are very good.

The Vikings, we have all heard tales of long haired, muscular, bold seafaring savages that swept out of Scandinavia a millennium ago and explored, terrorised and colonised mainland Europe, Western Asia, and even as far as Eastern Canada. Hundreds of years later they have left us with a rich history drenched in blood but also one adorned in stunning artefacts. 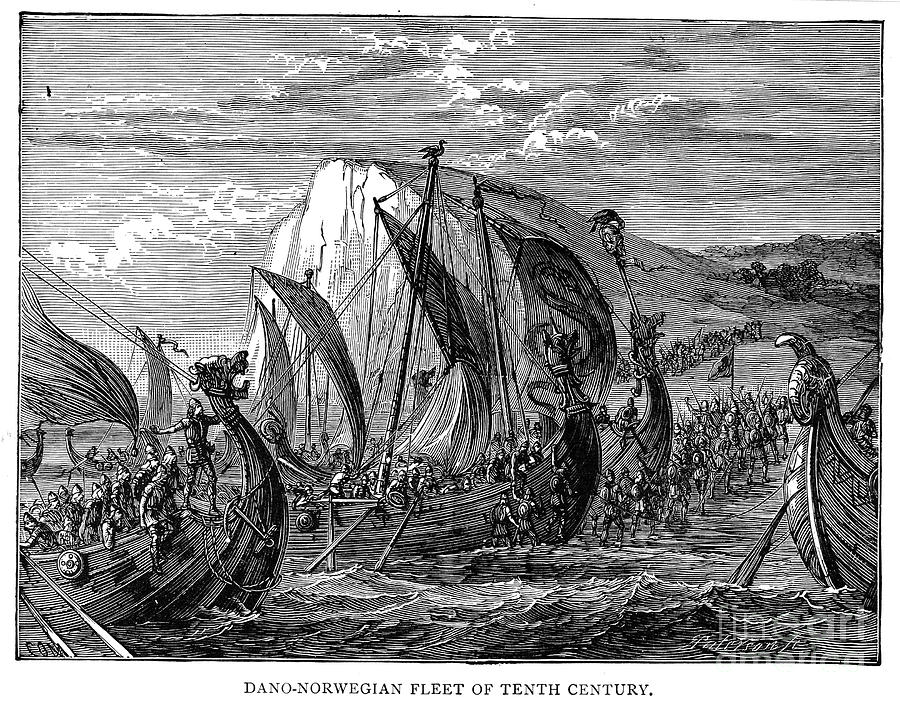 A period of  250 years saw most of the world fall prey to raiders called Vikings. They dominated Russia and gave it it’s name, they crossed the Atlantic 5 centuries before Columbus. They visited Constantinople, Greece and they sailed the Volga. There are signs of their influence even today with two of our weekdays named after their Gods, Thursday ( Thor’s day) and Friday (Frigg).

In the pre-copernican age it was believed throughout Europe that beyond the North Atlantic there was only monsters, mortal dangers and the end of the world. Only the foolhardy would even consider crossing this liquid barrier. Then we had the Vikings. They colonised Iceland and Greenland. It is believed that that at the end of the first century AD, Bjarni Herjulfsson discovered a land of woodland and low hills, America!

Their eagerness and willingness to sail the seas saw them assimilate into many local populations becoming Slavic. Their raids across the Black Sea and into Constantinople saw them being recruited into various emperors employ as Varangian Guard (the elite unit of the Byzantine Army between the X-XIIII centuries). It is widely believed that the Vikings became the dominant class of eastern countries as they utilised to the fullest extent the rich pickings that could be made from trade along The Vulga River.

Their curious and adventurous character led two chieftains Bjorn and Hasteinn (859AD) with 62 long ships make an amazing and historic voyage. Looting and following the Bay of Biscay, across the Iberian Coast, towards Rock of Gibralter and then for the first time ever, they continued across the Mediterranean and tracked the North African coastline. Raping, looting and pillaging as they went and indeed took “blue men” as slaves, their first black captives. 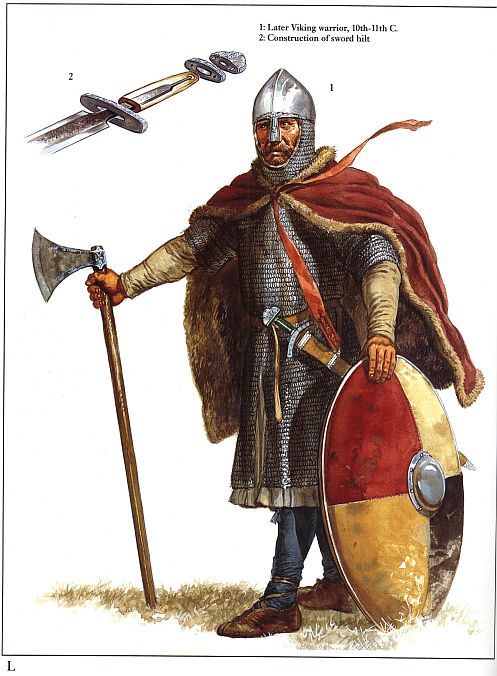 Viking influence and their territory continued to expand to the North where Norse settlers reached Greenland around the end of 10th century. The first Viking that landed upon the soil of North America was Leif the Lucky who named a mass of mountains and glaciers Vinland. The Norse were not just about murdering and looting, their own lands were poor for farming and so they intended to invade and colonise new lands. I have read somewhere that the first white child born in The Americas was Snorri son to Thorfinn who in the 11th century had built a colony to the West.

We have always pictured the Vikings wearing horned helmets yet for all the battles fought by the Norse, only one Viking helmet has, as far as historians know, survived – from the Gjermundbu mound burial. The rounded helm was made from four iron plates reminiscent of the spangenhelm pattern. It also displayed a “spectacle” guard around the eyes and nose which formed a primitive mask but there was no evidence of horns! 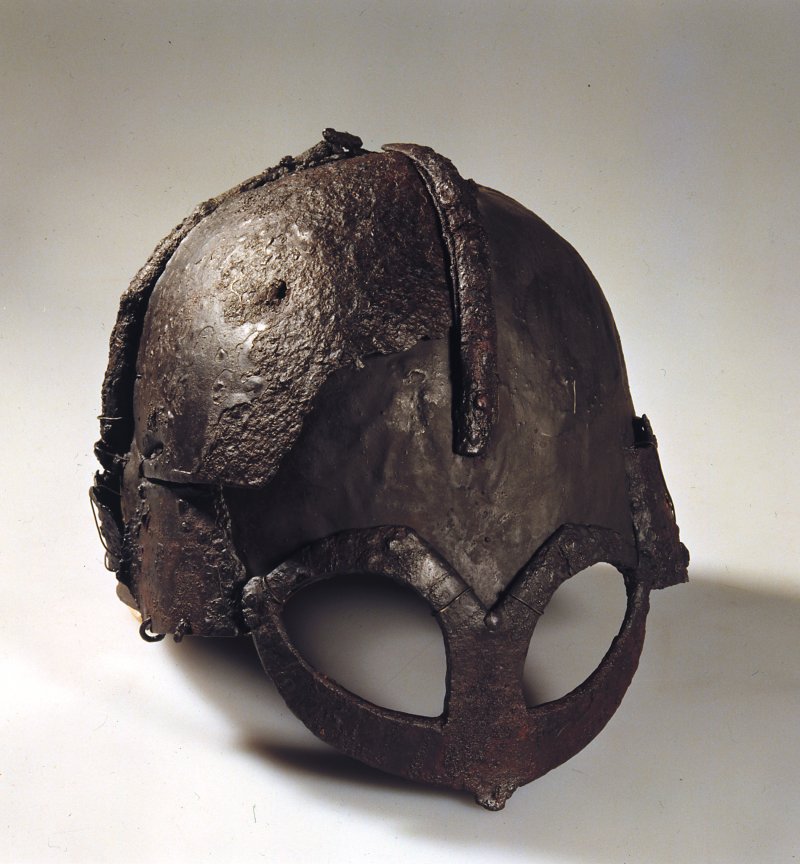 Gjermundbu helm – the only surviving viking helm and note no horns!

During the Viking Age, Scandinavian men and women travelled to many parts of Europe and beyond, a cultural evolution and migration that left in its wake, from England to Byzantium, colonies of farming and trading people, with a rich heritage of craft, weapon and tool making, artefacts. This period of upheaval and frantic shuffling for power and land also had a pronounced effect on the Scandinavian homelands, subjected to a variety of new influences from the Catholic Church, saw the birth of royal dynasties and by the end of the 11th century, the kingdoms of Denmark, Norway and Sweden had been formed!

The almost “nomadic” sea faring nature of the Norse peoples was replaced with growing townships that operated as separate entities with ecclesiastical centres, monetary economies and market sites, influenced by the cultures of the English and German peoples. The age of the Vikings had come to an end.

First impressions are very good so let us begin with the figure first and the main piece which consists of head and torso. The head is finely detailed, hook nosed, hooded eyes and a snarling visage all add to the fury of the Viking in full leap, complete with plaited hair and beard. The figure is adorned with a short sleeved, chainmail undershirt with a long flowing cloak clasped at the neckline. 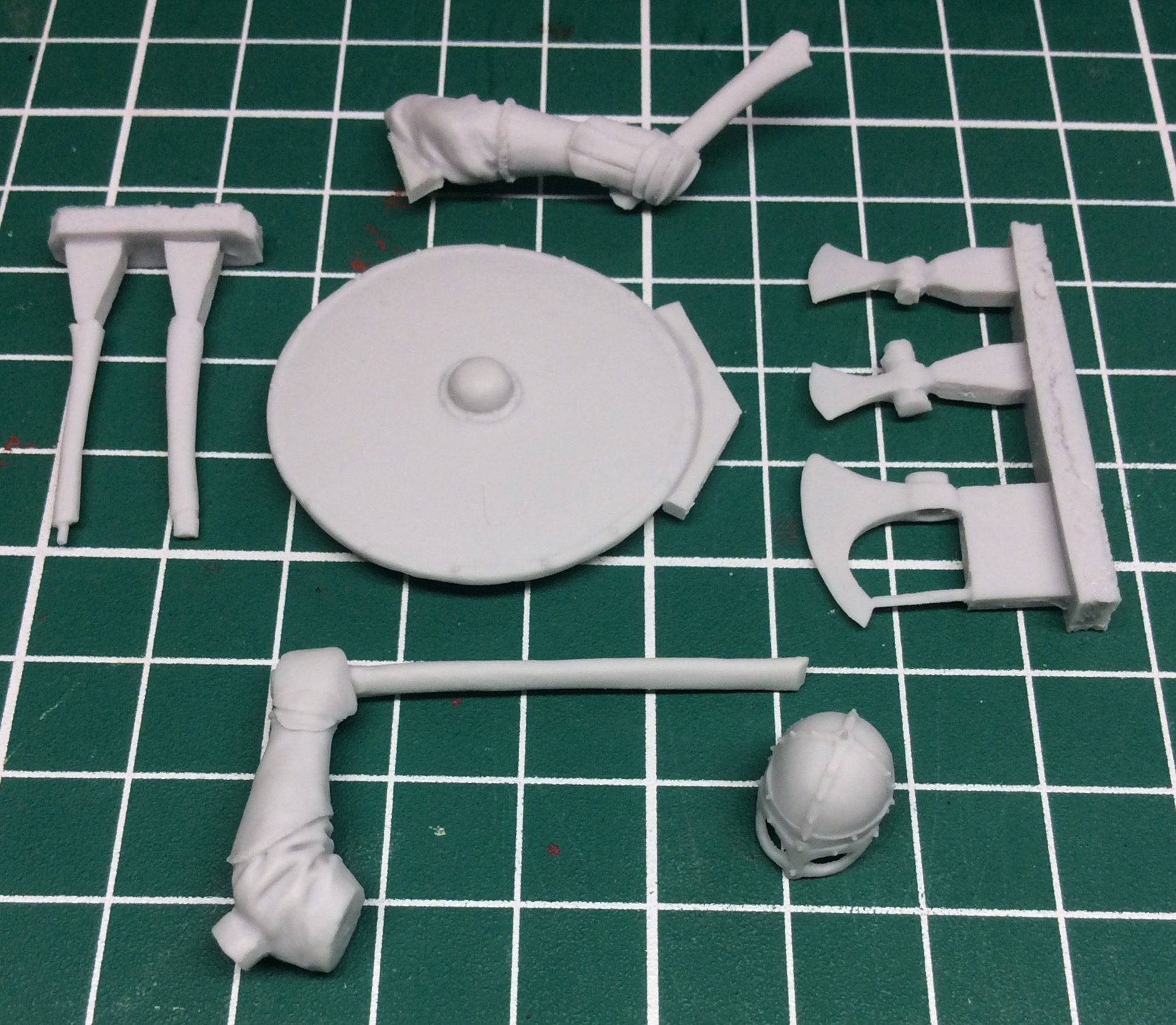 Detailing to the chainmail is very fine so take care not to obscure the links when priming. Straps and belt are nicely detailed but lack the sharp undercuts that I have seen in some other sculpts, the hip pouch to the right hand side is a nice touch, along with an indent to accept one of the throwing axes, th second attached via the same method on the left hip. Both of these axes come in separate parts, axe head and handle, as I have not built the kit myself yet I can not argue for or against this decision.

The trousers are the baggy Pantaloon style, cinched just below the knee and tucked into the ankle high moccasin style shoes. There is a section of billowing cloak that fits to the back displaying complex and deep folds that should be great to paint. The torso and this section form a hole to accept the pin of the round shield. The shield has nice detailing to the tacked down hide, metal boss and planking to the inside. 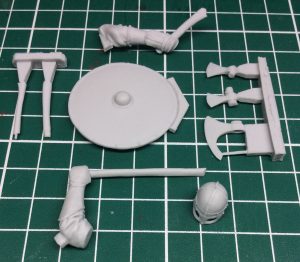 the equipment and weapons

The two arms attach via a peg and hole assembly, the forearms are protected by leather protectors and the folds and creases to the undershirt sleeves show realistic and natural looking folds and creases. I rarely get on with two handed weapons and the way they are assembled but this dry fits very well.

Both hands carry a length of the axes handle and when the arm sits to the shoulder correctly both parts line up perfectly. The lower section of the left leg attaches snugly too, no need for gap filling thus far! There is a small peg on the sole of the shoe to fit the hole at the top of the longship’s masthead.

We have three axe heads, two small for the throwing axes and the larger one for the double handed war axe, detailing is nice and look particularly accurate looking at the references of those weapons used during the Xth century. The helm for me is a real highlight, depicting the Gjermundbu helm, with its four sections, rounded cap and spectacle eye protection. This attaches tightly to the cut head via a large square peg and hole assembly and instantly makes our Viking so much fiercer!

The masthead is beautifully sculpted with sweeping curves, textures and a combination of engraved and embossed Viking filligree. The planking to the hull shows nice overlapping surfaces and iron headed nails. 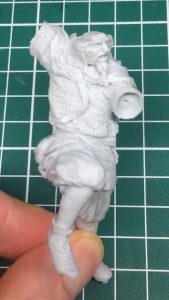 The cast is very good throughout with no major defects such as air bubble holes or casting slippages, there are one or two slight mold lines that are easily removed and several parts will need cutting from sprues and filing smooth.

For an historical piece this actually shows a lot of originality with the dynamism of the pose and the inclusion of the masthead. I ma not totally sold on the composition of the entire sculpt as everything seems to be too vertical for my liking. If and when I get around to painting this piece myself I may look at having him leap from the side, with the piece twisted at an angle on the plinth or maybe if I were to leave as intended I would add something else to the base to balance the figure. Over the sculpt and movement in the piece is exceptional and the masthead itself is a work of Art. 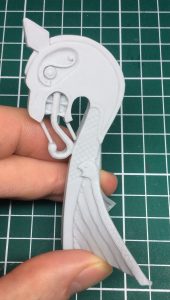 wonderful detailing to the prow and masthead

This kit will appeal to many figure painters across most genres as the Vikings were so charismatic yet savage at the same time. As always the trousers offer the chance of striped or chequered patterns and the shield as always offers the painter the opportunity of practising his freehand. Viking subjects are always warmly received in our hobby and I see no reason why anybody with an interest in history or the Viking age would not want this in their collection!

At $50 I believe this is a fair price for an exciting kit and I believe the painter will be duly rewarded with hours of great painting. I think it will make a nice addition to nayones cabinet and would surely make quite an entrance at the competitive shows. It is also nice to see that DG has taken the presentation of his works seriously and the new packaging is a major step up in quality!