I only recently happened upon RN Estudio. They are a Spanish company which offers to help you create 3-D sculpts and 3-D prints.  In addition, they offer a number of ready to go resin figure kits.  These kits range in size from 28mm to 70mm. The first of two reviews for RN Estudio will be on one of their 54 mm female kits, Valentina.

This is a character that would not seem out of place in a final fantasy game or any number of Japanese anime movies. While not as cartoony as a Chibi figure, Valentina has the stylized facial structure and eyes which are so common among traditional anime work.  Valentina has the look of a fantasy figure, though one set in a fantasy world that has developed firearms. She’d be just as at home in a steampunk setting, perhaps on the deck of some airship. And, given the sometimes retro clothing in anime, she could even fit in a futuristic setting. Of course in that case you may want to swap out her weapon. 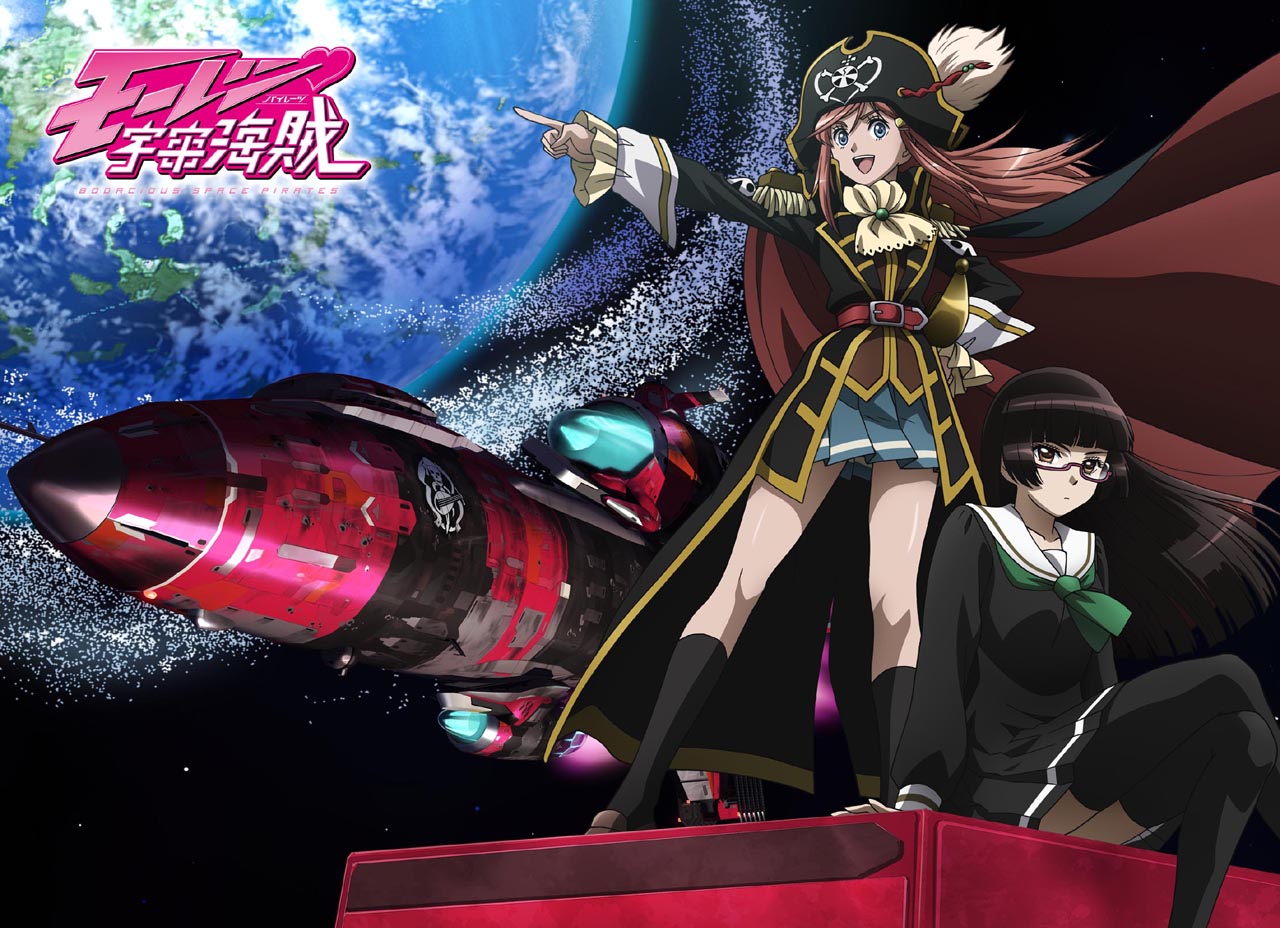 Marika Kato of Bodacious Space Pirates, a possible source of inspiration for this figure

Although the figure is not supposed to represent a specific character, the look of the piece is certainly reminiscent of Marika Kato from the anime work Bodacious Space Pirates. The iconography on the clothing and some of the details do not match, so this resemblance may be just a coincidence. But the figure could be converted to more closely represent Marika Kato or left as is and be any number of generic anime style figures.

There are many anime kits already on the market, however the majority of them are the large scale garage kits that tend to be 1/8th scale or larger, while Valentina is 54mm (1/35th scale). This size makes her much more appealing to those of us used to painting 28mm and 54mm kits, as those larger garage kits tend to rely on different techniques for proper painting. 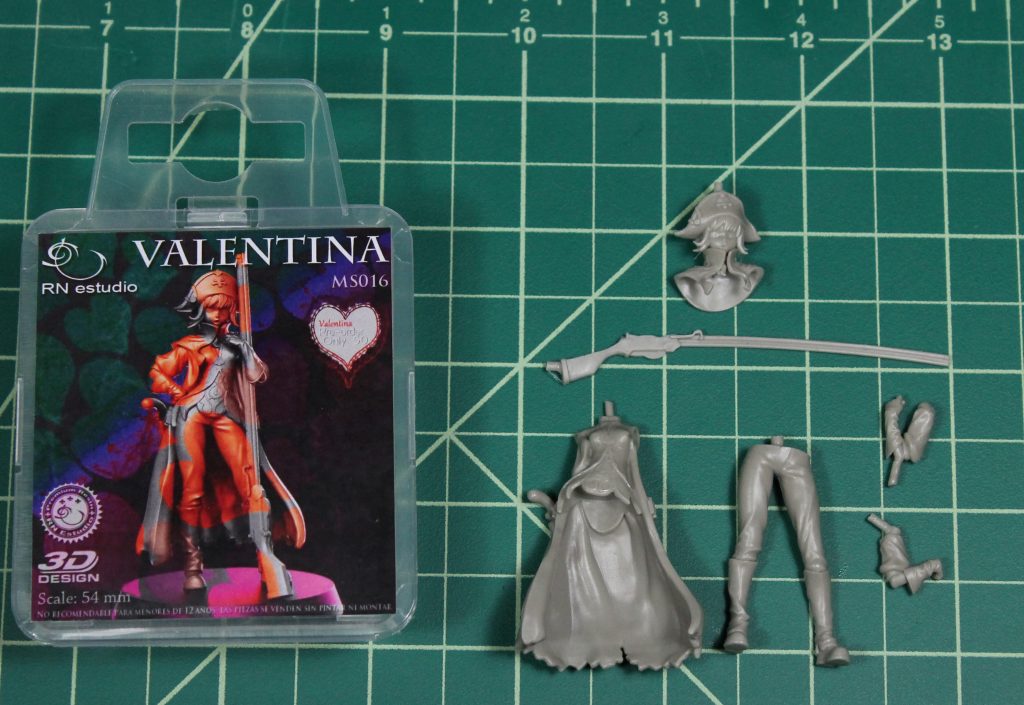 Box and components of the kit

Valentina comes in a plastic container with a picture of the unpainted 3-D sculpt on the front.  Inside the case, the pieces (with the exception of the gun) are contained within a plastic bag. The kit is made up of 6 pieces. The body comes in two parts (torso along with the coat and her legs).  The arms, head, and weapon are all separate. It should be noted that the figure does not come with a base.

The plain circular plinth on the cover of the box is only in the 3-D design and not provided with the kit. This is not a drawback as most people who paint display figures will wish to create their own base anyway. However, some may prefer to have a ready-made base, so best to be aware that it is not a part of the kit. Since there is no base with the kit, the bottom of the feet are flat, thus it is recommended pins should be inserted so as to secure the figure to the base. 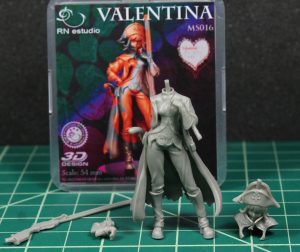 A look at the figure partially assembled (dry fit, no glue)

The figure fits together beautifully. The upper body and coat slide down onto the legs easily and fit snugly. The left arm easily pops into the shoulder joint with a minimal seam where the parts meet up.

A few nubs of resin left over from the casting must be removed before the head and right arm can be attached, but once done, they fit as well as the other pieces. The gun rests against the arm and upper body but, as there are no sockets, the exact placement is left up to the person assembling the figure.

As mentioned a few resin nubs are left from the casting, including to the hat, neck, each arm, and butt of the gun which will need to be removed.  There are also a few thin wisps of resin (seen more easily below in the close up of the head) which must be removed. Mold lines are minimal and should be easy clean up. As there are no major gaps, just some slight ones at the seams around the arms, clean up and assembly of this figure should be quick and easy. 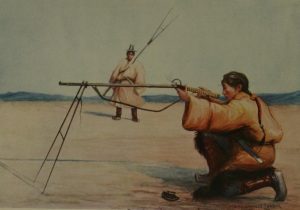 Example of a matchlock musket

There was a slight bend in the barrel, though this is common for long, thin resin parts and I have seen far worse on other kits. A gentle heating with a blow dryer or submerging the piece in warm water for a few minutes should soften it up enough to easily straighten it out.

The mechanical detail on the gun is a bit light. For example, the trigger guard is cast as a solid piece with no gap where the finger would go in or a separate trigger. The detail on the hammer/lock mechanism looks to be reminiscent of a matchlock musket.  Still, one might wish to embellish the sculpt with mechanical etch-brass components if you have access to them and would certainly go a long way towards exaggerating the steampunk feel of the figure.

The barrel of the gun is quite small, so if one wishes to drill it out, great care should be taken. A similar effect may be achieved simply by pressing a sharp pin into the end of the barrel. This should leave an indentation with can imply a shaft running down the length of the gun. 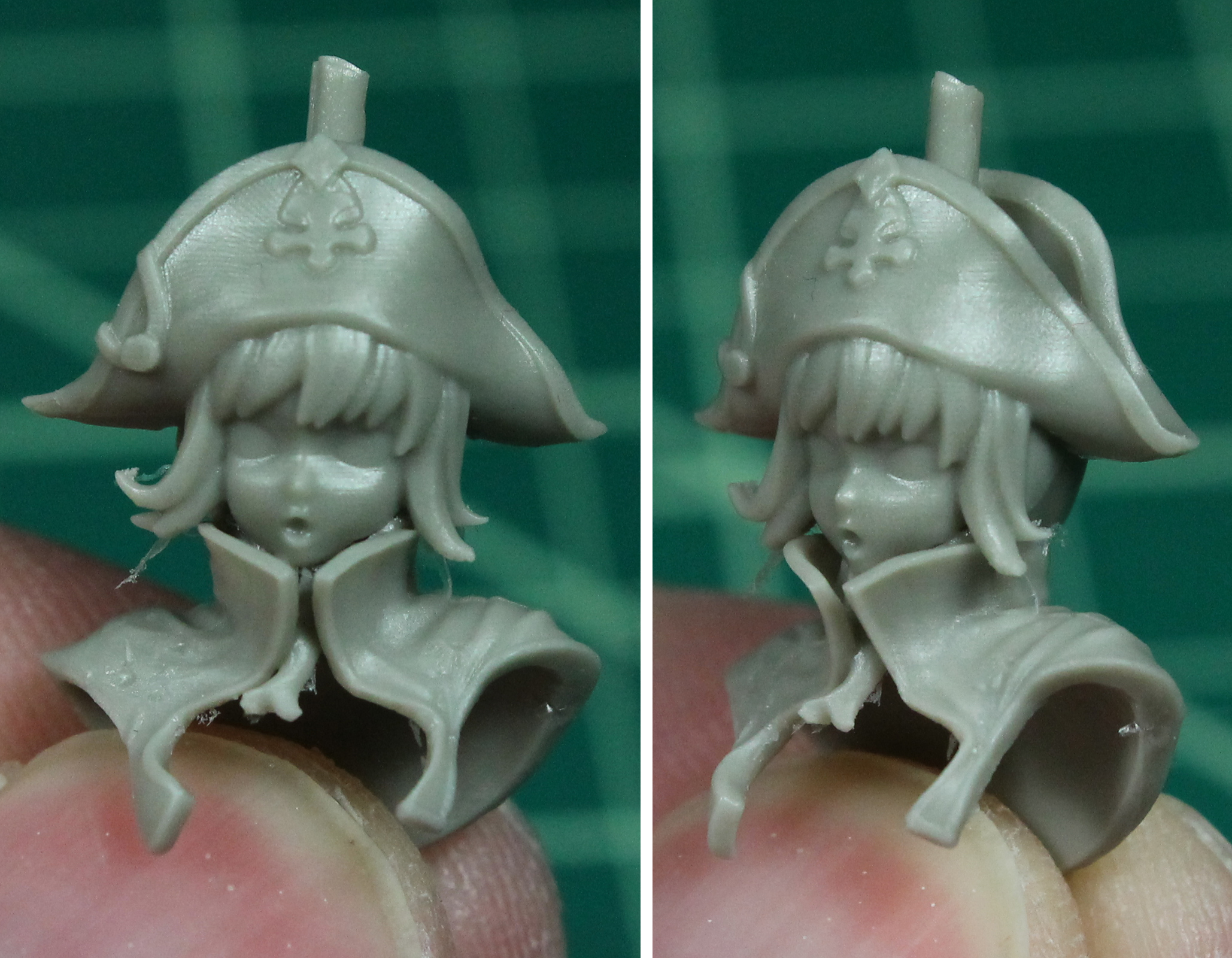 Close up showing the detail of the face and anime style of the figure.

The face of the figure is a nice representation of an anime style female. The shape of the head and nose capture that iconic anime look. Along with that are the large eyes for the anime style, also included on this figure. Though the rest of the sculpt possibly be used to represent a more realistic character, it is hard to go that route with the eyes which are so clearly anime style. 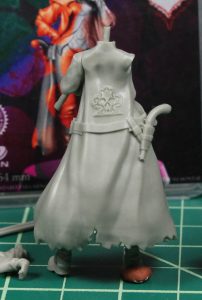 Rear of the coat, showing details of design and pistol

In addition, the hair has the typical anime look, with thicker curved triangular sections. The bicorne hat she wears immediately brings to mind naval officers and pirates however, bicorne hats were also worn by Napoleon and many of the generals and staff officers of that period. So it is not strictly a naval look.

The figure is dressed in pants and boots, a deviation from some of the more sexualised anime females who wear shorts skirts.  The figure also appears to be wearing a shirt and vest, along with a long flowing coat or duster and gloves. The bottom of the coat has a rough tattered edge sculpted in, showing some wear and tear to the piece.

A belt, unfastened in the front, goes along the back of the coat.  Attached to it hangs a holster and pistol. The pistol has the classic curbed handle common in early firearms like a flintlock pistol. As with the musket, the trigger guard on the pistol is sculpted as a solid piece with no gap or separate trigger.

Flintlock pistol, similar to one carried by the figure

There are design details sculpted into her shirt and vest, onto the hat, and on the back of the coat. The details on the front of the shirt are a bit light, so it will take some care to paint them cleanly. The other details on the hat and coat stand out more from the background, so should be easier to work with.

The design of the figure taps into many of the traditional anime themes and concepts. Although she bears a resemblance to Marika Kato, the figure appears to be its own character. The elements of the design bring to mind a number of different genres (fantasy, steampunk and perhaps even retro-futuristic given a bit of weapon conversion). This gives the painter a great deal of flexibility in how they wish to interpret the piece.

The pose of the figure is well done, with her weight shifted to one side.One arm resting on her hip and the other wrapped around the gun. The flowing of the coat adds a bit of motion to an otherwise static piece.

I think the anime qualities of the sculpt will appeal to many people who are fans of that genre of movies, shows, and games. Though there are many anime kits out there, the majority are large scale garage kits (1/8th scale and larger) and require a different approach to painting than regular 28mm figures. There are also the small scale Chibi pieces, but that is a different aesthetic. As far as I’m aware, there are not many anime style figures in 1/35 scale, so this piece definitely fills a gap in the market.  While the anime look may turn some people off, it is a popular style and I can see this figure appealing to many fans of that genre.

The kit, priced at 30 euros, is a little on the high side but not unreasonable.  Looking at other companies which produce 54mm resin figures, I’d expect a kit like this (without a large scenic base or other extras), to be closer to 25-27 euros.  That is just a small difference and not one I’d expect would put off someone interested in the figure.

In addition, the cost of the figure includes free shipping worldwide.  Depending on your location, this can be a significant cost savings.  So the price is actually more reasonable when you consider that the shipping is included.