The debut release from Figurinistanbul arrived quickly and safely in a “no frills” packaging, brown box, ziplock bags and bubble wrap. The box is sealed with a sticker sporting their logo and inside we also find their business card and details. That’s it! This is a traditionally sculpted, regulation style bust, consisting predominantly of head and shoulders sculpted to a turned pedestal. It consists of five parts, torso and head, pouch, bone staff and two adornments. It is a 1/10, polyurethane resin bust sculpted by Olivier Bouchet and stands about 70mm in height. 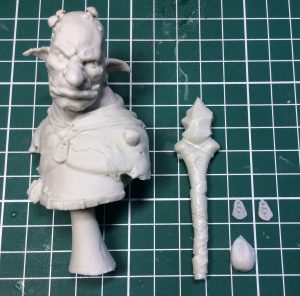 I grabbed the opportunity to speak with Olivier and here is what he had to say:

“the troll sorcerer or sorcerer troll, as you want, was a bust I sculpted about 18 months ago, originally intended for myself, but which I sold a few months ago to Figurinistanbul for their new range. The focal point of the sculpt is the face which I wanted to make scary yet humorous at the same time. For me faces are the most important part after the global silhouette and heavily influences the remainder of my design and composition.

I wanted to give the character a primitive aspect even if it is a sorcerer; he is a troll after all! To achieve this I gave him worn out clothes and a bone staff. The mushrooms and stone fetishes are a nod to his affinity and relationship with nature plus it was fun to sculpt. I wanted to give the painter, as many different elements to paint as possible, so I sculpted stone, flesh, cloth, leather, wood and the mushrooms. I hope people will have a lot of fun painting him!”. 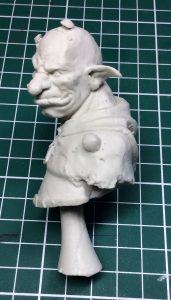 Nice textures to the robe and skin

The Prose Edda book Skáldskaparmál describes an encounter between an unnamed troll woman and the 9th century skald Bragi Boddason. According to a section within the book, Bragi was travelling through a forest late one evening when a troll woman aggressively challenged him for his identity and in the process described herself John Lindow provides us with the following translation:

They call me a troll, moon of the earth-Hrungnir, wealth sucker of the giant, destroyer of the storm-sun, beloved follower of the seeress, guardian of the “nafjord”, swallower of the wheel of heaven [the sun]. What’s a troll if not that?

John Lindow notes that the etymology of the word “troll” remains uncertain; yet he defines trolls in later Scandinavian folklore as “nature beings” and as “all-purpose otherworldly being(s), equivalent, for example, to fairies in Anglo-Celtic traditions”. This provides further endorsement for Olivier’s vision!

The sculpt in my opinion is quite charming with a sense of raw power to its’ style with nice textures throughout and sharp undercuts to the straps and belts and nice details such as the stitching to the worn clothing. It does lack some of the finer details but that wouldn’t really fit in with the nature of this troll. 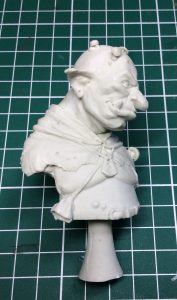 evidence of the mold-lines that will need removing

There is a snear to his visage that shows a darker side to this rather humorous sculpt and the head is turned a little to its’ right and cast down somewhat. The bone staff attaches via a small plug and when fitted really adds a lot to the composition and design of the piece bringing everything together. Detailing to the strapping is nice and the sharp edges of the flint should allow for some nice painting!

The cast is good but not the best I have seen, details are all nicely captured and there are no excessive flaws such as air bubble holes and the such.

However, there are quite a few mold-lines around its’ circumference and these will require quite a bit of work, nothing technical, just time and care to remove and file smooth. Be careful not to start defacing the surfaces, textures and details.

Other than the hooded garment and the pouch (of potions?) there isn’t too much to suggest this piece is a sorcerer, maybe a book of spells attached to his belt or maybe a frog could have added to the visuals and created more of a magical sense to the troll.

That said his facial features, the fungi growths from his hard looking skin, the hooded robe and bone staff all add a lot of character to the bust. The kit is nicely thought out and well designed , he looks muscular (a bit over weight) with strong neck and shoulders and it is well balanced too. 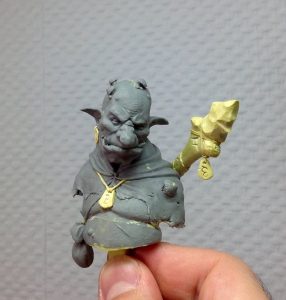 It is an increasingly difficult thing to do to create something truly original in our hobby despite it being a fantasy bust. However, I really like this troll of nature, I would love to have seen a full figure of this maybe in 75mm scale?

I am a big fan of Oliviers’ and I think this is a great bust, it isn’t too big either with each element big enough to do some nice work on it without it being so large that keeping it visually interesting becomes difficult. For a first release I think it should be desirable to collectors and painters of fantasy subjects.

The bust costs €36 plus shipping (I am not going to mention you know the strength of the GBP etc) but I think this is a reasonable price point, especially considering this is a new company and they are competing in a saturated market with some very big names. I think the bust offers us a lot of painting options and it should be a lot of fun to paint!