“The Horde is Coming” is the latest release out of the Joaquin Palacios Studio, it arrived in a brown card box adorned with the artwork by Sergio Calvo Rubio. This is a digitally sculpted, traditional bust, comprising head and shoulders and is cast by GRX Creations. The bust is accompanied by six small parts that are small teeth and extensions to its hair. The parts come in ziplock bags and protected within bubblewrap. First impressions are very good indeed! 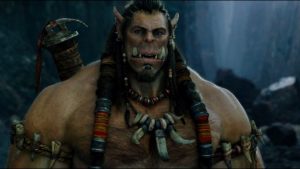 The bust is clearly Durotan (from World of Warcraft) the heir apparent to Garad, chieftain of the Frostwolf clan. It seems to depict him sometime around the years prior to the First War, a result of a conflict fought between the orcs and humans following the arrival on Azeroth (the home world) of the orcish clans of Draenor.

The human kingdom of Azeroth was completely destroyed, its survivors forced to flee to Lordaeron. Durotan cared deeply about the world and those living upon it. It was thought he may become a shaman, but it was just the way he was, so he believed. Durotan quickly became best friends with a Blackrock orc named Orgrim despite them being from rival clans. 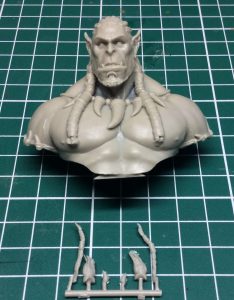 The lore between the novels and fiction and that of the movies is considerably different and its a vast world that doesn’t need discussing too much here, but I felt it important to give some idea of the character of our subject.

The title of the kit is particularly fitting as The Horde come streaming through the Great Gate!

The sculpt is stunning, a perfect representation of our Orc “hero”, all hulking muscles, braided hair and fetishes. The head and hair are stunning, the textures, undercuts and crispness to the detailing is incredibly well done. The inclusion of the hair ties and tassels is a great attention to detail of the character design.

The facial features are perfect, making him instantly recognisable to anyone with an interest in World of Warcraft. The hooded brow, high cheekbones, over-cut to the jaw are all well rendered with great volumes throughout. The ears and eyes are also very well rendered, the eyes in particular capturing the caring persona of Durotan. 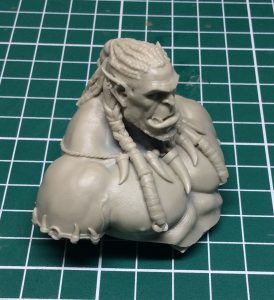 The tooth necklace is an accurate replica once more of that worn by the films character and the anatomy is wonderful. The thick shoulders, broad chest and barrel like stomach all illustrate the brute strength and mass of a powerful orc.

The cast is pretty much flawless with just one very faint moldline at the back of his head, should pose no issues to clean up at all. There is also a stub of excess resin that will need cutting and filing away at the base of the stomach, this is a leftover from the casting process.

The crispness of the detailing and the subtle textures such as the wrinkling and facial hair are a testament to the quality of the casts by GRX.

The tassels of hair fit snugly to the lengths of braids that sit atop his mighty chest, however, fitting the two tiny teeth to the lower jaw will require a steady hand indeed!

The design is simple, just showing head and shoulders. The inclusion of the bone torques at the point of the bicep is a nice touch as it triangulates with the necklace (although Joaquin did not also sculpt the smaller bead necklace seen in the movie) leading your eye up to the focal point which is as always the face.

It is difficult to say anything is original nowadays, even less so when the bust is based on a character from a major movie. However, despite this I particularly approve of this bust and strangely enough, the fact that there aren’t many, if any, other busts based on the realms of WoW, it makes this kit quite unique and original. To have improved on the kit, perhaps Durotan’s sword could have been included, as pictured above, strapped across his broad back. 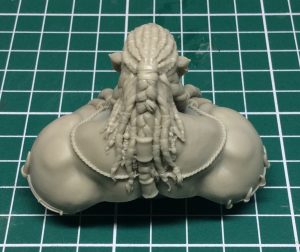 The works of Joaquin Palacios are eagerly and excitedly welcomed with each and every new release. Joaquin is rightly regarded as one of the finest fantasy sculptors! This is a 54mm scale bust and as such will appeal to those wishing to try their hand at painting their first bust.

This particular project will also have a massive appeal to collectors and fans of the WoW franchise. The bust will be straight forward to assemble with just the hair tassels and teeth to attach. Despite having a wealth of kits I wish to paint, I honestly look forward to putting paint to this one, perhaps with the movie playing in the background!

At €40, I believe this offers great value for money, the sculpt, cast, subject are all of the highest quality, this kit comes highly recommended.

Where Can I Get It?        via email: freemansculptures@hotmail.com