As a lot of you will know, Best Soldiers not only act as a store distributing figures from a broad range of figure producers but also sells it’s own range of figures. This latest review will show you another incredible sculpt by Antonio Zapatero depicting a Grenadier of the Imperial Guard 1809. The kit arrived quickly and safely, its’ distinctive wraparound black box is adorned with the boxart by Danilo Cartacci. This 75mm white metal kit consists of 17 parts including a scenic base and three different head options. What I really like about that detail is the fact that each head is not only different in detail but also in pose so each creates a different “feel” to the figure. First impressions of this kit are incredible.

The Imperial Guard (French: Garde Impériale) was originally a small group of elite soldiers of the French Army, who had served in at least two military campaigns, under the direct command of Napoleon I. However, over time their ranks were swelled with new recruits and even malcontents, soldiers who had served time for various misdemeanours.  It acted as his bodyguard and tactical reserve, it was divided into the staff, infantry, cavalry, and artillery regiments, as well as battalions of sappers and marines. The guard itself as a whole distinguished between the experienced veterans and less experienced members by being separated into three sections: the Old Guard, Middle Guard and Young Guard. 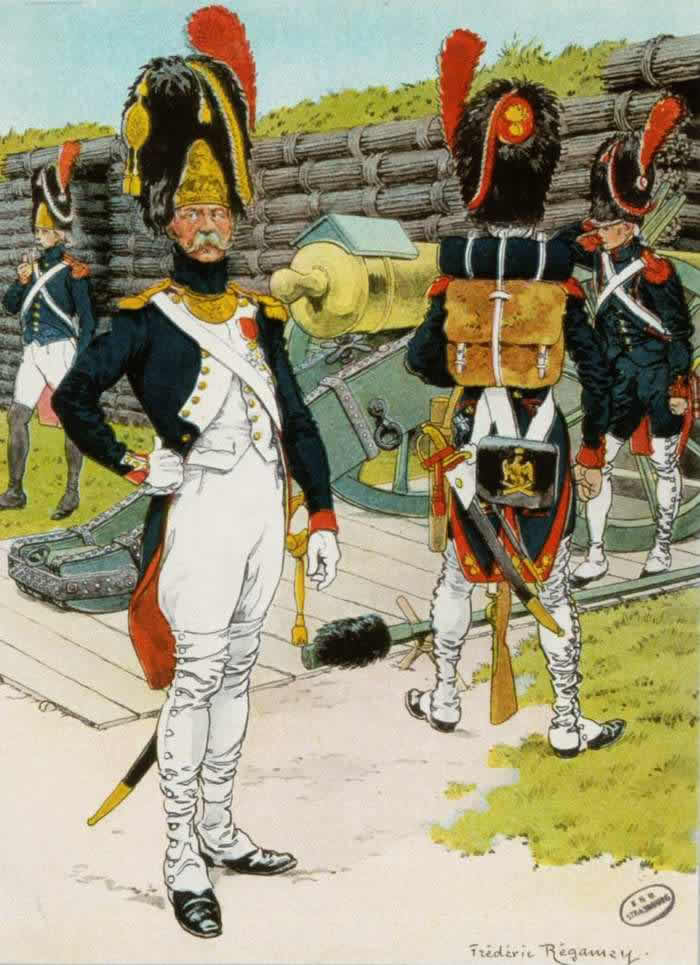 an illustrative example of the grenadier uniforms

The Guard had its origin in the Garde des consuls, created November 28, 1799, by the union of the Garde du Directoire exécutif and the Grenadiers près de la Représentation nationale. These formations were primarily proposed for the security of the legislative branches of the French Republic and initially consisted of about a thousand soldiers. One may question their utility, as they did not oppose Napoleon’s 18 Brumaire coup of 1799. The Consular Guard changed its name to the Imperial Guard on May 18, 1804 and located it’s headquarters at the Pentemont Abbey in Paris.

Napoleon took great care of his Guard, particularly the Old Guard, who known to complain and moan were given the nickname Les Grognards, the Grumblers. They received better pay, rations, quarters, and equipment, and other French soldiers even referred to Napoleon’s Imperial Guard as “the Immortals”.

The Guard were integral to the climax of the Battle of Waterloo. It was thrown into the battle at the last minute to salvage a victory for Napoleon. Completely outnumbered, it faced terrible fire from the British lines, and their line began to crumble. The Middle Guard without permission to do so began to retreat, the only time in it’s history that this had happened, and at the sight of this, Napoleon’s army lost all hope of victory. The Middle Guard broke completely however, the Old Guard battalions held and secured the retreat of the remainder of the French Army before being almost annihilated by enemy artillery fire and cavalry charges.

“The Guard Dies but does not Surrender!”

Bonaparte and the generals were often advised to adopt new fashions and dress in the Roman style, but the “kilts” were met with small success. The Jacobins clung to the historic dress of the Gardes francaises which, besides being of the national blue, white, and red, was after all, the uniform worn by those heroes that stormed the Bastille. Moreover, long campaigns had emptied the quartermasters of uniform supplies and the soldiers became angry with their old clothes, the uniforms of the Royal army, with faded caps, worn out jackets and ill-matched shoes. They firmly believed such garments lowered the prestige of the Guard.

The Imperial Guard soon had uniforms consisting of better cloth, real leather and gold laces, a new type of soldier had appeared at the dawn of 19th century and the Guard prided itself on setting the example. Officers of the Guard would make themselves nigh on pennyless in kitting themselves with the finest clothes and accoutrements. According to Henri Lachouque , (28 August 1883  – 23 October 1971) a french officer and historian:

“An officer thought nothing of spending 35 francs for a bearskin and 18 for a pair of elegant boots, such elegant outfits pleased the young women. Between 1806 and 1810 the Guard’s uniforms had cost in excess of 20 million francs and the cost kept rising. In the Line, these soldiers were given strict guidelines to adhere to, ensuring their uniforms were kept in pristine condition, coats and waistcoats had to last 3 years, overcoats 4 years, hats had to survive 5, and heavy equipment, believe it or not had to be cared for and kept operational for 20 years!”

“The wardrobe of the grenadier was extensive and included a bearskin cap, 2 dress coats, 2 waistcoats, 2 pairs of breeches, 1 pair of stockings, and a single shirt. The guardsmen combed their hair and tied them just 2 inches below the base of the skull, shined their boots, chalked their leather belts and wore clean white gloves. The officers’ uniforms were literally loaded with gold lace”.

The main piece consists of the torso and legs depicting stunning detail to the dress uniform. I do not have the necessary knowledge to discuss the various decorations but the piping, buttons, accoutrements etc are beautifully rendered. Straps display sharp undercuts and the creases and folds to the various fabrics are realistically presented. The tail of the coatee style jacket is attached via a double peg and hole assembly and again is full of beautiful piping and detailing that made the Imperial Guard uniforms so fancy and extravagant. 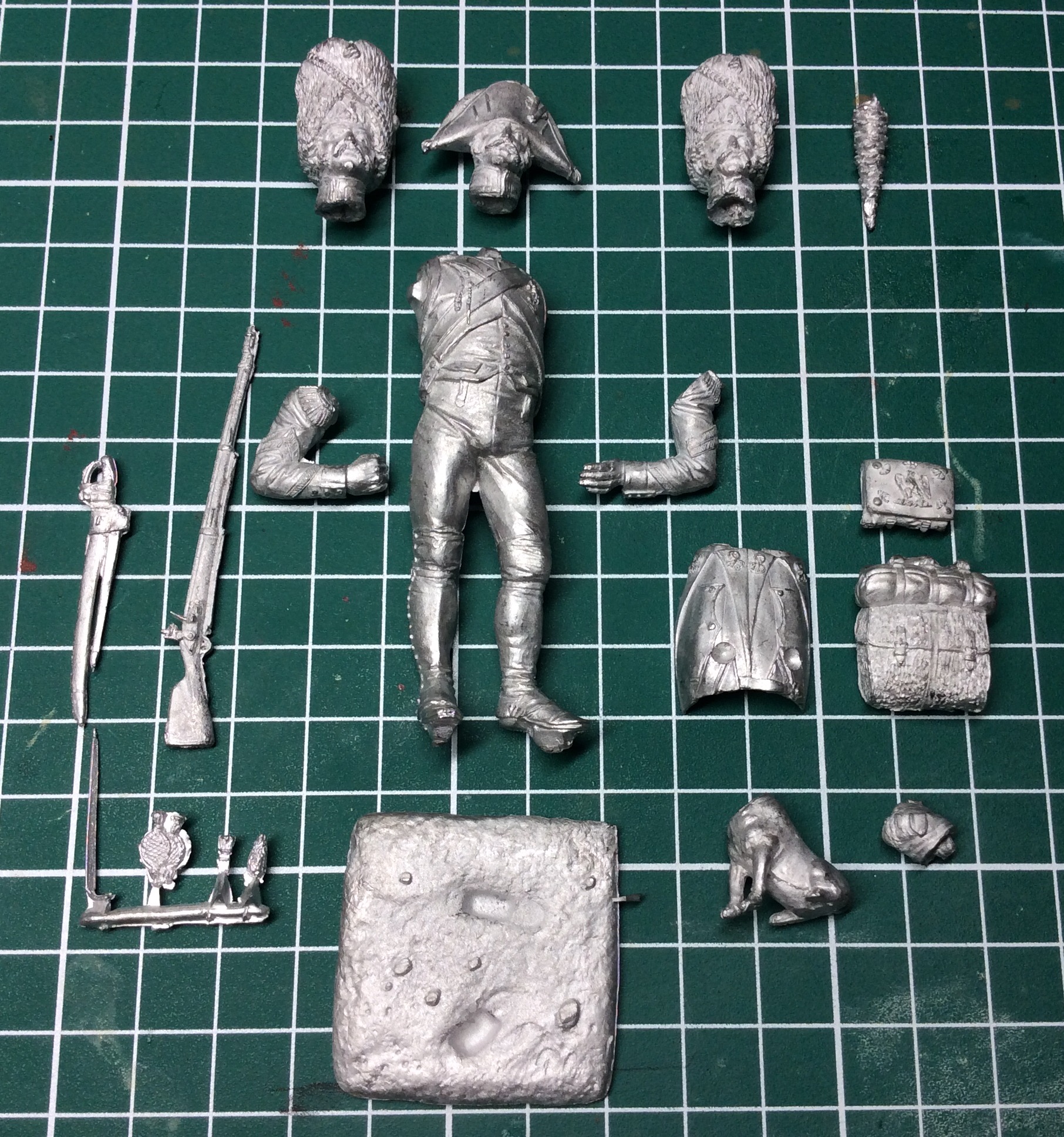 The turnbacks of the tail are dressed with red grenades. The lower leg up to the knee is covered by gaiters showing nice seams, belt loops and naturally occurring creases and folds, beneath these we have the flat shoes. 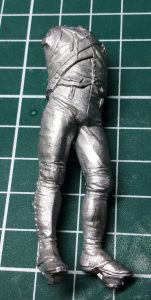 the main piece – showing detailing throughout the uniform

I believe the figure depicts a soldier of the light infantry, chasseur, which if correct may make the red cuffs painted on the boxart, historically inaccurate (although the cuffs became red with white trim from 1812 onwards), as I have read line infantry had red cuffs and the light infantry had blue. The blue jacket would have had red collar (boxart is blue) worn over the white undercoat. The white undercoat was “burned” a term given for treatment by chalk.

As already mentioned another item of the infantryman’s outfit were the white leather crossbelts. The natural colour of these was actually buff leather and were whitened with pipeclay. One went over the left shoulder to support the cartridge box on the right hip whilst the other carried the infantry sabre. If the sabres were not issued to some troops, like for example the fusilier companies, or the chasseur companies after 1812, they wore only one belt, this detail actually helps to place this Grenadier at 1809. 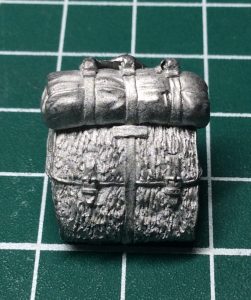 I believe the chevrons upon the left arm of the jacket indicate this figure to be a Sergeant Major, highest possible ranking for a Non Commissioned Officer. The left arm, is positioned in such a way that the hand rests upon the left hip, accurate detailing to the lapels and the line of three cuff buttons. The right arm, like the left attaches via a peg and hole assembly, positioned so as to rest upon muzzle of the rifle, stock on the floor.

The musket was The ‘Charleville’ model 1777 (AN IX), which measured about one and a half meters in length. This piece is nicely sculpted with great attention to detail, in particular to the cocking mechanism. Ammunition was kept in the black cartridge box (giberne), the large outside flap was covered by white fabric covers made of undyed linen during campaigns.

Next I would like to talk about the rucksack, attached to the back via a large peg and hole assembly in the centre of the back, the cross straps passing underneath. This was made from cow or goat skin with the hair on the outside, inside the Grenadier carried everything they needed plus personal items. Trim, straps and buckles are all nicely rendered with the bedroll strapped across the top.

The kit comes with a great looking dog too that adds a nice little touch and will make the scenic base more interesting. The section of square base, holes pre-drilled to attach the feet of the figure is rather simple and plain, displaying some rough texture and a couple of loose stones. 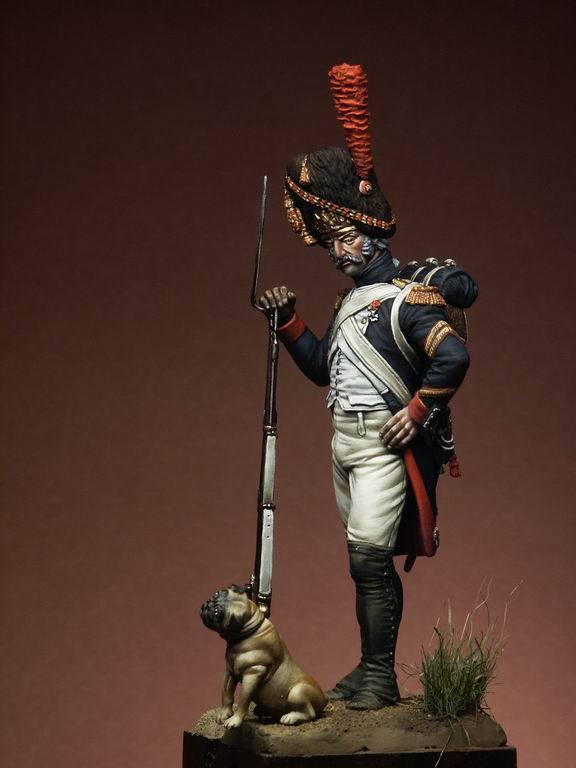 one of the alternative boxarts

For me the sculpting is impeccable and the cast is particularly good as always. What makes the kit even better is the three head options. We have one wearing the bicorn, this was comfortable and popular with the soldiers and was worn throughout the Revolutionary Wars. Along the top trim, left of the left eye they wore a pompom. The Grenadiers dyed theirs red, whilst blue or green was reserved for the fusiliers. The head depicts what seems to be a veteran soldier hair tied back in a short pony tail, sporting side burns and a large moustache. 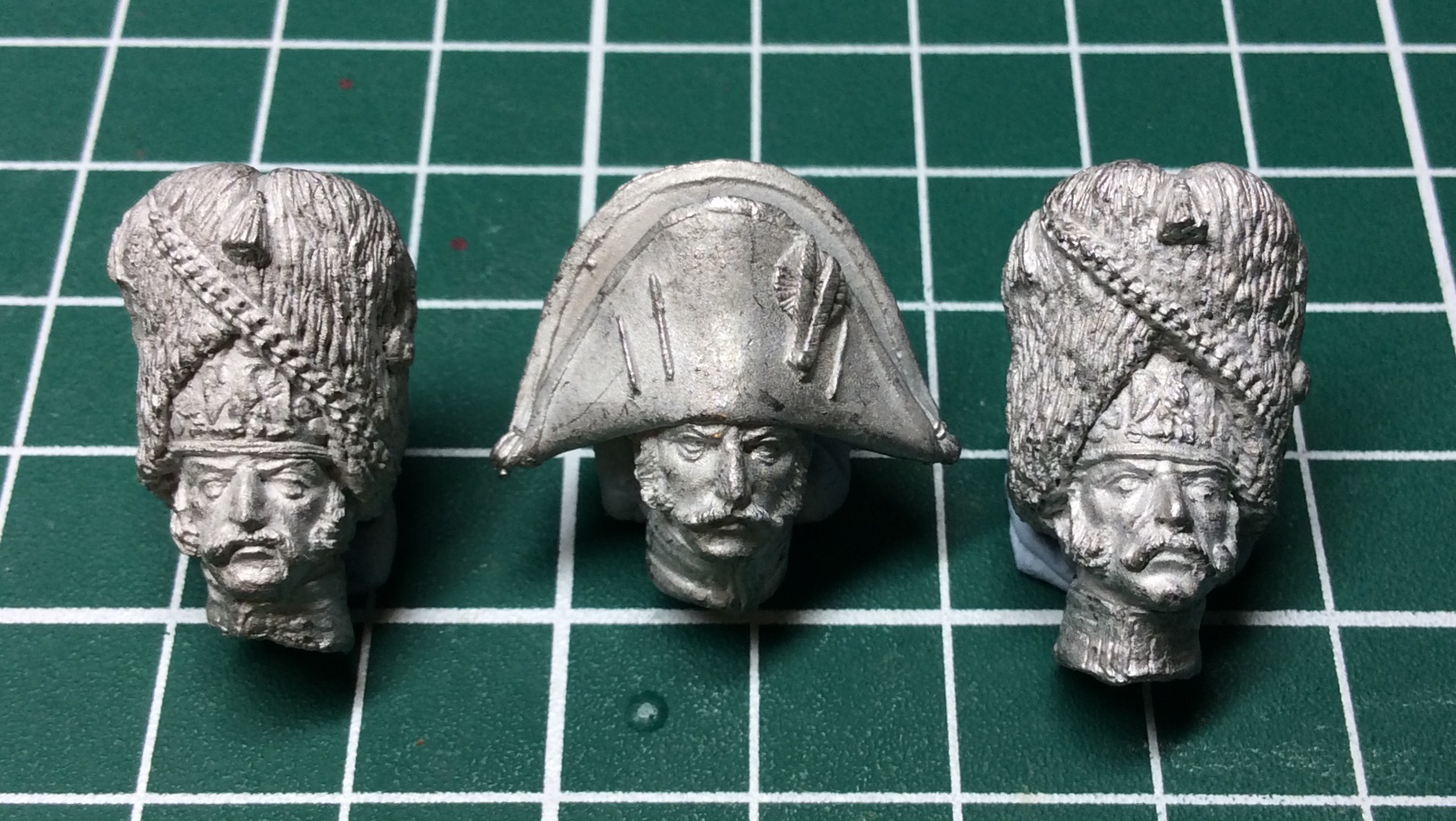 Next we have two heads, both wearing Bearskins although one is considerably shorter than the other. When researching this figure I found that the hat length was dependent on the soldier for example: 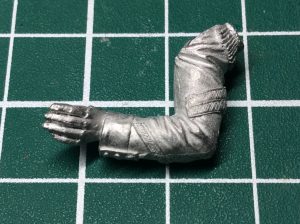 detailing to left arm showing marking of a sergeant major

Perhaps this was the reason behind the size difference in the sculpt, maybe it was something else but my knowledge of the Napoleonic era is minimal, so I can not be sure. A red plume was attached to the left side and cords were more frequently white but were officially replaced with red, although white was still preferred and more usual. The bearskin had a brass plate at the front embossed with a flaming grenade. Both heads again display pony tailed hairstyles, moustaches and facial hair.

The cast is near perfect, some soft flash needs removing from edges of musket, sabre and bayonet for instance. There are one or two mold lines but no other defects are present. Most of the small parts are attached to metal sprue and will need to be cut away and the area filed smooth. I love using wire wool to clean up metal miniatures, be sure to wash before priming to ensure any metal filings are removed.

The figure is beautiful, the sculpt is exquisite, the pose is well balanced and the anatomy is accurately observed. The attention to detail is second to none, everything about this figure speaks of the very highest standard. Figures of the Napoleonic era are not original subjects, indeed they are highly sought after and popular with a wealth of historical references available.

The composition is well considered and there is an elegance to the sculpt that matches the pomp of the Imperial Guard, the variety of the detail and the stance created from the different head options offers the painter a unique project. 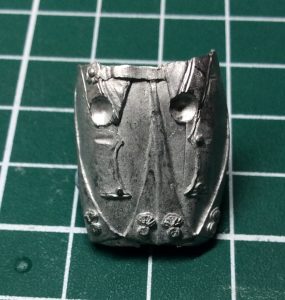 tail of the coatee showing trim and grenades on the turnbacks

This figure will definitely appeal to the historians and the historical figure painter, in particular those with an interest in Bonaparte and the Napoleonic Wars. The presentation, sculpt and cast are all of the highest standard and anyone wanting to challenge their painting skills or indeed wanting to push themselves, will be hard pressed to find a more technical figure. BestSoldiers have released another masterpiece to add to their ever expanding catalogue!

In my opinion €47 is a competitive price point, the same day I received this review item, I received another which will cost €49, and that arrived in a ziplock bag in a jiffy bag! The kit provides three different options and don’t forget it comes with a dog too! I think that if you have the money to purchase the kit you will realise that it is great value for money.