The mini busts by H&V (Heroes and Villains) are always a delight to see, I have seen many painted by the likes of David Zabrocki and Juanma Vergera and their latest releases depict two combatants of the Franco-Prussian War (1870), a particularly interesting period in history. These are small, highly detailed, traditional busts with sculpted pedestal.

The Lieutenant Chasseurs d’Afrique was sculpted by Antonio Meseguer with the boxart by the uber- talented and well respected Pepe Gallardo, this is a single piece with no casting defects other than a little clean up needed on the smooth under-surface. The second item represents a Flankenfeuer le Bourget, consisting of three parts and sculpted by Antonio once again, the boxart that adorns the blister pack this time is by Jose Hernandez with the alternative work done by Juanma Vergera. Both are 1/16 in scale and should provide the painter with a more relaxed challenge between larger projects.

The Franco-Prussian War (19 July 1870 – 10 May 1871) otherwise known as the Franco-German War and often referred to as the War of 1870 by the French(19 July 1870 – 10 May 1871), was a conflict between the Second French Empire (the Imperial Bonapartist regime of Napoleon III from 1852 to 1870) and the German states of the North German Confederation  (consisting of 22 previously independent states) led by the Kingdom of Prussia (1701 and 1918 and included parts of present-day Germany, Poland, Russia, Lithuania, Denmark, Belgium and the Czech Republic). 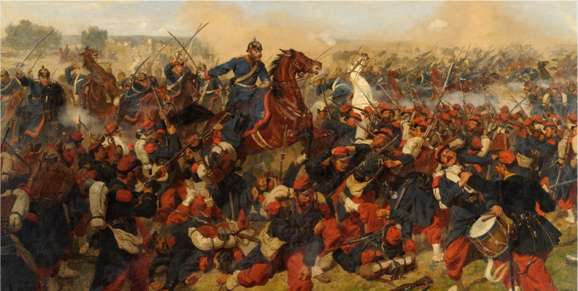 Prussian ambitions to extend German unification caused the French to fear a shift in the European balance of power, with some historians arguing that the Prussian chancellor Otto von Bismarck (1815 –  1898) deliberately provoked a French attack in order to draw the independent southern German states of Baden, Württemberg, Bavaria and Hesse-Darmstadt—into an alliance with the North German Confederation dominated by Prussia.

On 16 July 1870, the French parliament voted to declare war on the German Kingdom of Prussia! Hostilities began three days later when the German coalition mobilised its troops far quicker than the French and commenced to invade NE France. The German forces were superior in numbers, had better training and leadership and made more effective use of modern technology, particularly railroads and artillery. 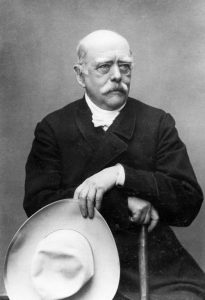 A series of swift Prussian and German victories in the east, including the Siege of Metz and the Battle of Sedan, saw the capture of Napoleon III and the army of the Second Empire thoroughly defeated.

A Government of National Defence headed by General Louis Jules Trochu (1815 –  1896) declared the Third Republic in Paris on 4 September and continued the war for another five months, yet faced continual defeats under the German onslaught. The German forces were superior in numbers, boasted better training and leadership and were particularly efficient at embracing available modern technology, including the railroads, artillery and the such.

The capital fell during the Siege of Paris (19 September 1870 to 28 January 1871) culminating in a revolutionary uprising called the Paris Commune a radical, socialist and revolutionary government that ruled Paris from 18 March to 28 May 1871, until it was bloodily overthrown by the regular French army (May 1871). 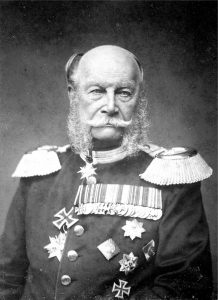 Following this German Empire was proclaimed under the Prussian king Wilhelm I (1797 – 1888), who ruled for almost three decades between 1861 – 1888, uniting Germany as a nation-state. The Treaty of Frankfurt (10 May 1871) “allocated” Germany the majority of Alsace along with certain areas of Lorraine,becoming the Imperial territory of Alsace-Lorraine (Reichsland Elsaß-Lothringen). The successful German invasion of France and the unification of Germany did indeed unbalance the balance of power within Europe and Otto von Bismarck maintained considerable authority and influence in international affairs for the next two decades. The French were determined to regain Alsace-Lorraine and together with British apprehension about this unbalanced seat of European power became considerable  factors in the eventual outset of WWI!

The casting for both busts is excellent with minimal clean up required and no major defects such as air bubble holes or casting slippage. The one piece bust of the French Lieutenant is a particularly expressive piece especially when we consider the actual size. The facial features are delicately rendered and portray him “mid scream”. The open mouth exposes the tongue and the two rows of teeth, creasing the skin around the lips, raising the cheekbones and furrowing the brow, so attention was made to the anatomy and the effect upon it during the shout. 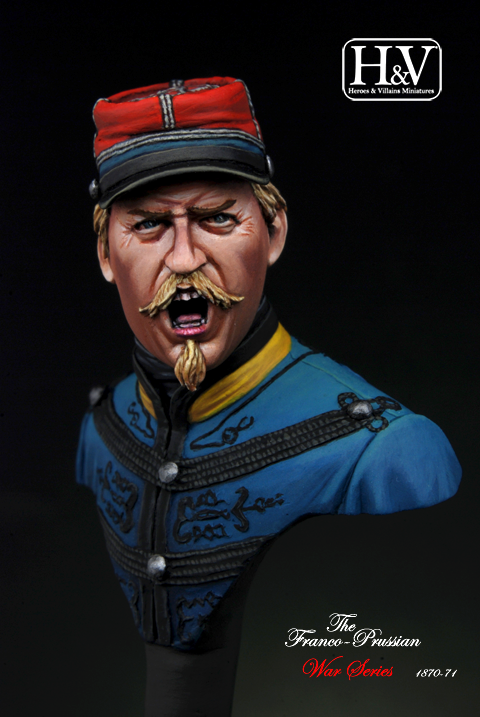 The moustache and goatee beard are nicely sculpted displaying individually sculpted clumps of hair. The quarter section, peaked cap sports accurately represented banding and trim with nice detail to the top. The we have the shoulders and chest, he is wearing field dress, with the buttoned, high neck, gold collar with the embroidered banding that crosses the jacket left to right, with the stud buttons correctly placed. The decorative stitching across the chest is another great touch! The seams to the jacket along with the creases and folds are natural looking and not overworked. 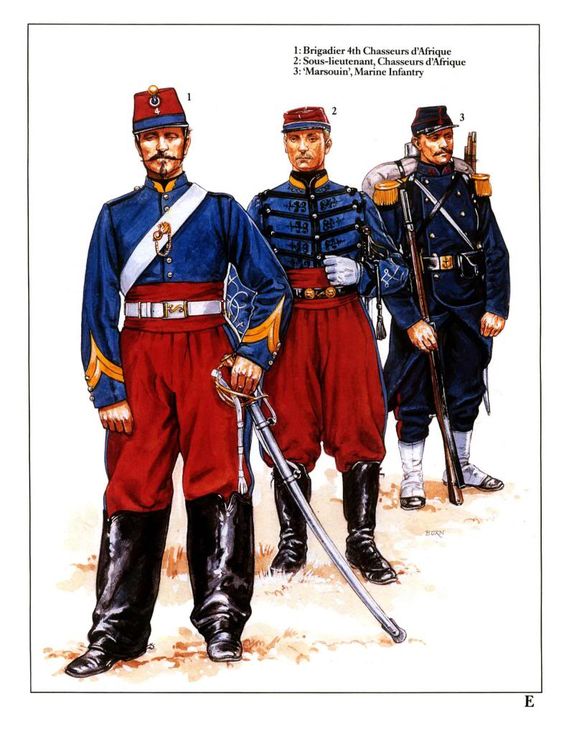 Uniforms of the Chasseurs d’Afrique

Our second bust is a Prussian soldier a “Flankenfeuer” English translation being gunfire volley from a flank. this is a slight variant on the traditional bust in that we also have  section of the rifle along with his right hand clutching the sling. The face to this one is exquisite, wonderfully charismatic, poignant and somewhat nonplus. The cap looks similar to the Kepi, flat topped with peak bot front and back, often times the rear peak could have material attached to keep the sun off the back of the neck. I have no knowledge of this uniform and weaponry so I can not comment on historical accuracy but detailing is crisp, sharp undercuts where appropriate and folds and creases are once again realistic and correctly placed. 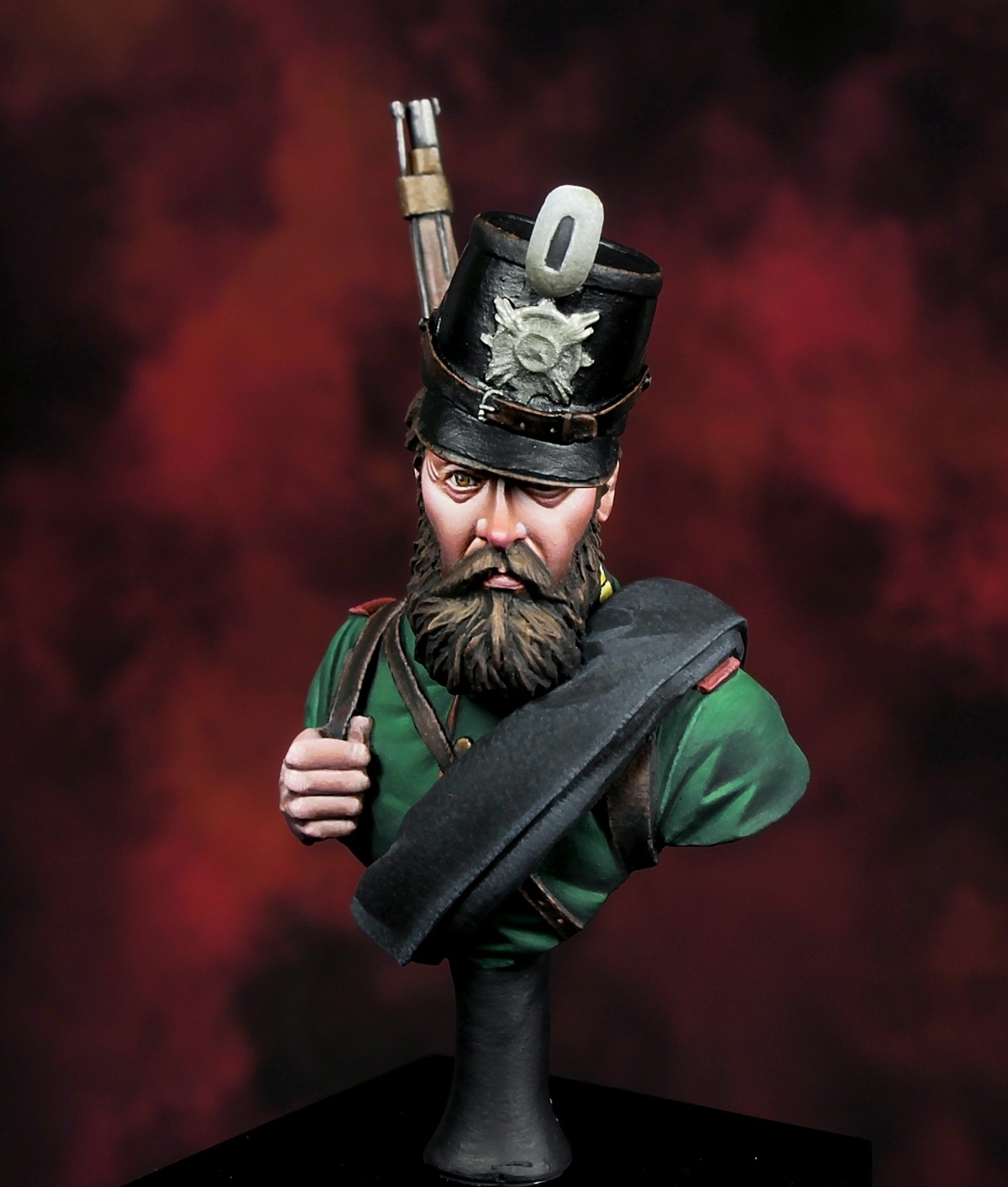 The design of both, being head and shoulders is reasonably basic yet at the same time, subtle differences in the sculpting produce two stark and contrasting projects. We have the fierce and animated French soldier and then the weary and resigned Prussian officer. A tilt of the head, a cap slightly askew, a frown here and there and it is quite alarming the difference to the ambience of the bust. The Franco-Prussian War as we have already read was key to the declaration of WWI and is a key era in our modern history, and as such is regularly depicted in our world of painting toy soldiers. This is however, the first time I have seen busts of this scale depicting this event. 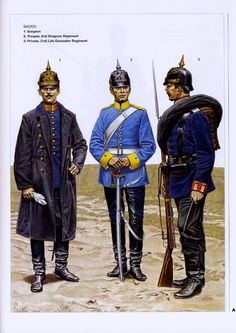 H&V Miniatures have a growing fanbase and are one of my favourite figure companies, always striving to bring us interesting historical subjects with the highest quality of sculpt and cast. The presentation and boxart is first class too although mine arrived in their traditional clampack box there was no bubblewrap or foam to stop them rattling about in transit, thankfully there were no fragile parts that may have been susceptible to snapping.

At approximately €18 each plus shipping, these are an absolute bargain, high end product with low end price point, making them extremely affordable and even more desirable in my opinion.