Darkstar Miniatures landed a great release when Mike Blank, the renowned figure painter and sculptor, agreed to create this Royalist soldier of the English Civil War. The kit is titled “The Defeated” and consists of seven polyurethane resin parts, sealed in a ziplock bag, wrapped in packing material, inside a small, plain cardboard box adorned with the monotone boxart. The figure is of 54mm scale but stands approximately 60mm in height and includes a scenic based depicting a section of battle field along with a canon ball. First impressions of the sculpt are very good indeed however, I believe the casting quality could be better. I would also like to offer a special thank you to my friend and master painter Luca Olivieri, for granting permission to use his painted version of this great figure for the feature image!

The English Civil War (1642–1651) was actually a series of armed conflicts and political machinations between Parliamentarian (“Roundheads”) New Model Army and the Royalists (“Cavaliers”) led by Oliver Cromwell, over the running of government. The first (1642–46) and second (1648–49) wars saw supporters of King Charles I pit themselves against the supporters of the Long Parliament. The third (1649–51) saw fighting between those supporting King Charles II and supporters of the Rump Parliament. The Parliamentarian victory at the Battle of Worcester on 3 September 1651, resulted in the end of this political and military upheaval, the Civil War was over! 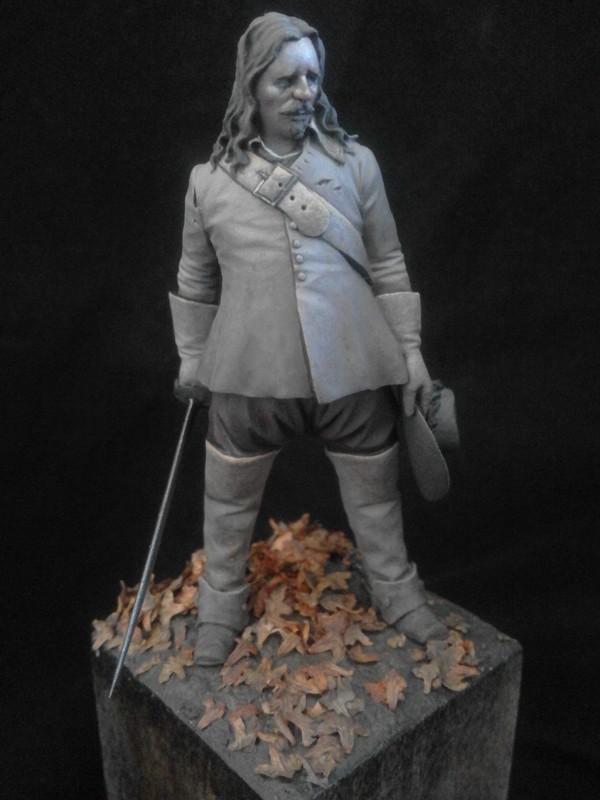 the monotone boxart – Mike’s style is so distinctive

Several outcomes manifested themselves with the cessation of hostilities:

Cromwell at the head of Royalist cavalry

These conflicts were not restricted to England as Scotland, Wales and Ireland were also affected and suffered conflict as such the Civil War was often referred to as the Wars of the Three Kingdoms. The two sides had their geographical strongholds throughout the United Kingdom, as the minority in that area were silenced or fled to safe havens with fellow supporters. The Royalist strongholds generally included the countryside and the less economically developed areas of northern and western England. The Parliamentarians however, had most of the cathedral cities (except Chester and the Royalist stronghold of Oxford). In addition all the industrial centres, the ports, and the regions of strong economy and commerce of southern and eastern England typically were also parliamentary strongholds.

Many of the strategies used by the Spanish and Dutch during the Dutch war for Independence (1568) were implemented by generals on both sides. The main element came to be known as “pike and shot infantry”, both sides would line up, facing each other,  infantry brigades of musketeers in the centre,  brigades arranged in lines of musketeers, three deep. The first row would kneel, the second would crouch, and the third would stand, allowing all three to fire simultaneously.

This meant two groups of three lines, allowing one group to reload while the other prepared themselves and fired. Mixed in among the musketeers were pikemen, their pikes were between 12 and 18 feet long, their primary purpose was to protect the musketeers from cavalry charges.  The cavalry flanked the infantry, the right-wing led by the lieutenant-general, and the left by the commissary general; the cavalry would aim to rout the opponent’s cavalry and then turn about and crush their infantry. 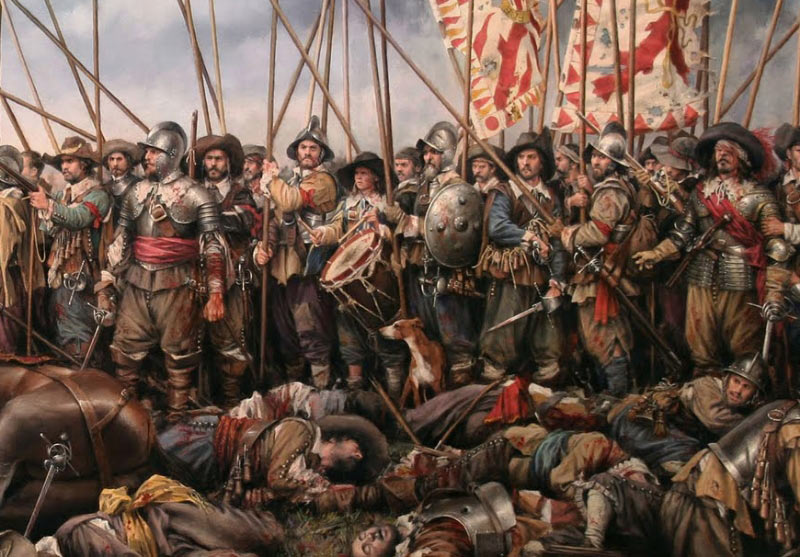 The more I looked into this era the more I realised how fascinating it was, there is a wealth of literature and online information and I really had to mind not writing a massive history report. As this figure does not depict Oliver Cromwell, I have not gone into any more detail about his life and death however, despite his loss at the pivotal battle, his reign as Protectorate resulted in many changes in the United Kingdom that benefited and still benefit the common people of this land.

This figure is almost sculpted in one piece with only the two hands needing attaching, the right hand with the sabre, the left holding his wide brimmed hat. We also have the scabbard to attach to the left side of the waist and two finely detailed spurs to add to the rear of the thigh length boot. I do not have the requisite knowledge on the dress uniforms and weaponry for this era although it is an episode in History that I may well look more in to. However, I did find a rather interesting PDF that discusses the composition and uniforms of the armies during the Civil War, I can not attest for it’s accuracy but here is a link anyways if you wish to look into this further (CLICK HERE). 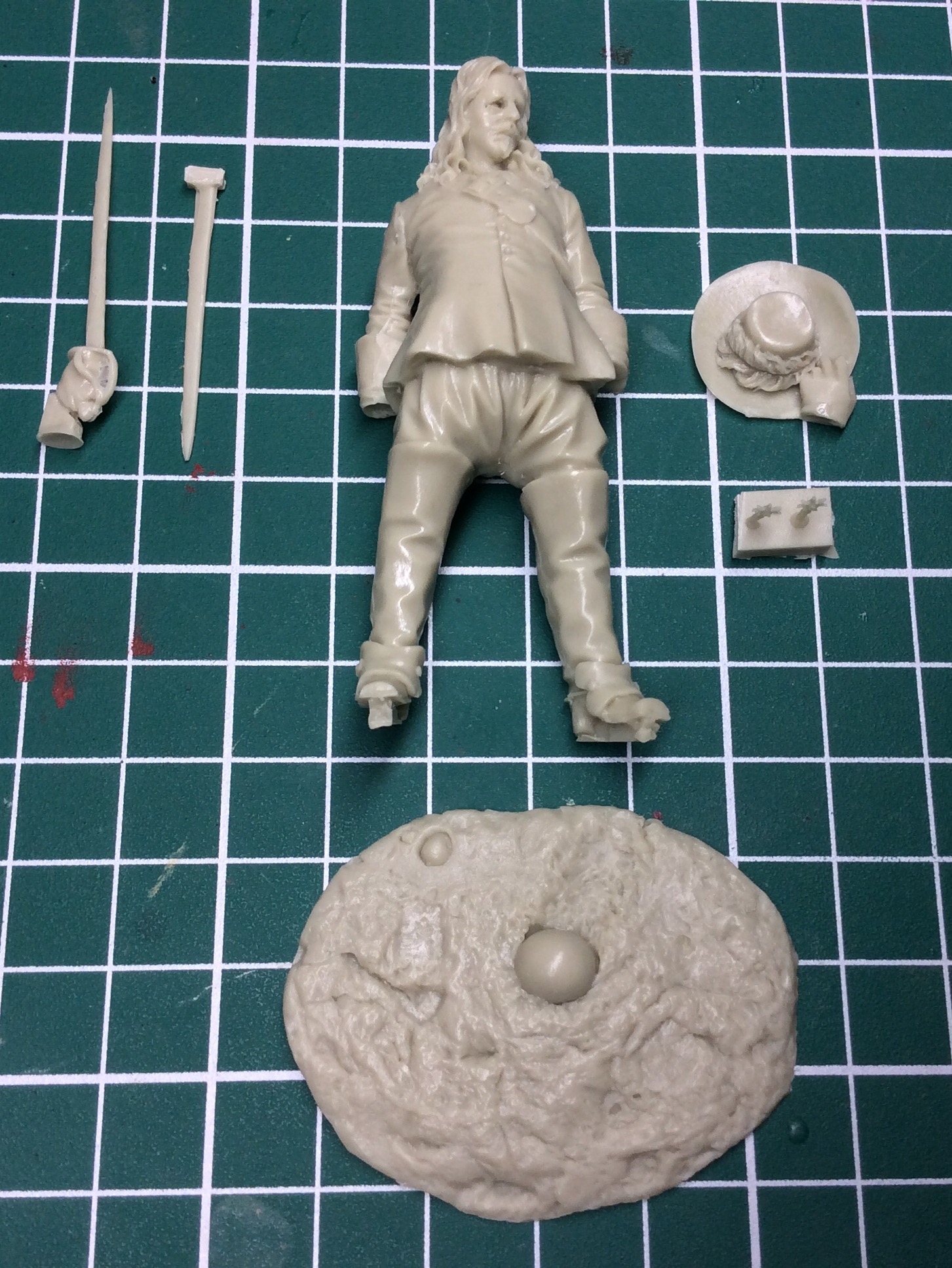 The figure carries a definite Mike Blank aura, characterful facial features, simplified volumes, crisp but not busy detailing and open spaces. The face and head in general has great details, the hair which can let many a sculpt down, is expertly rendered. The expression and the slightly slumped shoulders hint of a soldier who has seen or recently experienced the traumas of a Civil War, “The Defeated” a fitting title. 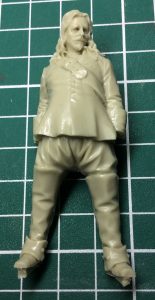 The jacket has nice detailing, subtle folds and creases and the cross body, thick strap cinches the fabric nicely. The fabric has one or two small cuts and there is a tear also to the seam at the shoulder of the right arm, the buttons are tiny and the oversized cuffs show attention to detail. The detailing to the buckle is nice and the scabbard attaches to the rear of the left hip, lining up with the strap.

The trousers flare at the hips displaying realistic creases and folds and tucked into a pair of splendid, thigh length boots. The heel to the boot is square and slightly raised, the oversized tongue is folded back and tied around the ankle. Attachment of the spurs looks like it might be particularly fiddly as I can not see a hole and pin for assembly.

The two hands both attach snuglt with no need to gap fill, again no pins just a smooth cut, the left carrying the hat with plume and a band wrapped around its’ circumference. The right hand carries the sabre or rapier sword, with a basic design with oval hand guard and a semi ornate knuckle guard. The scabbard is also plain and simple. 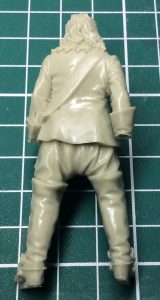 This is a figure that is very much better than the sum of it’s parts. The cast is not at the same level I have grown accustomed to with companies such as NutsPlanet, Life Miniatures and the such. The casting is done in house by the father and son team behind DarkStar. My copy arrived with a glossy sheen to its’ surface, I spoke with them about this and it seems this one got through their QC checks, the sheen is a result of releasing agent and residue, it should come away with a good wash in soapy water and I was told that if there were any issues with it, they were more than happy to replace the kit. This in my opinion shows a good level of dedication to customer service and satisfaction.

There are moldlines to the outside and inside of both legs and a small moldline to the right arm, there are small casting blocks to the sword hand and the scabbard which will need removing and care will need to be taken when clipping off the delicate spurs. There are no major defects such as air bubble holes or casting slippages.

The design stands out as being a typical Mike Blank creation, well balanced, considered and full of expression. This piece is so rich in history it is easy to envision it on a battlefield, post conflict, surveying the death and carnage. There is an air of solitude and desperation to the pose. I believe this piece to actually be quite original, perhaps to others less so, yet I have not seen too many of this genre for instance at the figure shows.

The English Civil War is particularly popular with historical figure painters as it was an era and event that massively affected the countries of the U.K. and shaped its’ history and future. As it is an era and genre that I have only started to gain an interest in I have not seen many figures such as this. Anything by Mike Blank is always considered original due to his distinctive style and other than the figures he has sculpted for the Mike Blank signature series for FeR Miniatures, this is a somewhat limited opportunity to own something rather special. Despite this being an historical piece I could also see with a little imagination this piece being painted up by fantasy painters too!

To purchase, create and bring to life a project sculpted by the master Mike Blank is an opportunity people should not let pass, when you throw in the price of £20, it really is an incredible project for a ultra competitive price. I have also heard a rumour to watch this space, which has got me keen to see what DarkStar have planned next! A highly recommended project!