The Commander (Royal Navy – XIX sec.) is a relatively new release from the ever growing catalogue from bestsoldiers.com and arrived quickly and safely in its’ rather high end looking black, wraparound box adorned with the boxart by Danilo Cartacci. We find the parts inside ziplock bags nestled between two layers of foam. 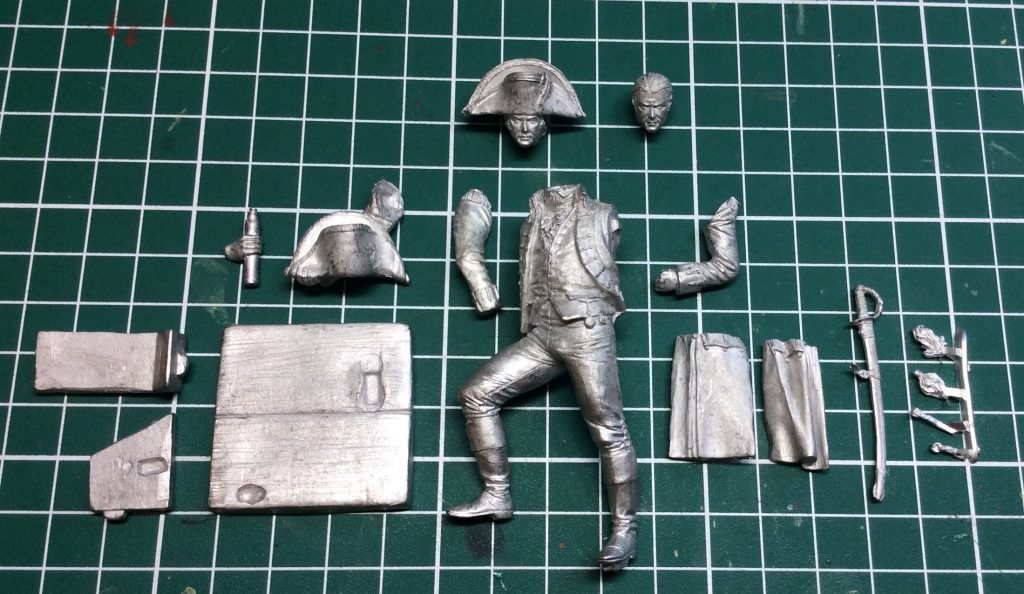 This is a traditionally sculpted 75mm figure by Antonio Zapatero, cast in white metal comprising 16 parts and a square base, this forms a small subsection of stairs and fits perfectly to a 40mm plinth. First impressions are very good indeed as the kit allows for three separate versions and includes two different heads and arms, although there are some rather delicate and fiddly looking parts, so take care! 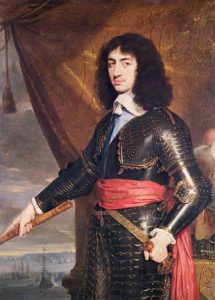 Although naval forces of one variation or another existed for a thousand years or so it wasn’t until the restoration of King Charles II (1630-1685), monarch of England, Scotland and Ireland, to the throne in 1660, that the Royal Navy was established as the national naval force of the United Kingdom.

Within fifty years, after the union of England and Scotland, it became the naval force of the Kingdom of Great Britain and its’ ranks swelled with the Royal Scots Navy.

Prior to the formation of the Royal Navy, there was just a rag tag conglomeration of “Kings Ships”, during the era of the Middle Ages (V-XV sec), which banded and disbanded as and when required. However, the Navy grew considerably during troubled times with France and came to a head during the Napoleonic Wars (1803-1815) which followed on from the French Revolutionary Wars (1793-1802).

By focusing it’s military resources in the navy, Britain could both defend itself and spread its power across the oceans;  thus posing a threat to rivals’ ocean trading routes. The military command needed only to maintain a relatively small, mobile, responsive, professional army that sailed wherever needed. It was then supported by the Navy with bombardment, movement, supplies and if needed reinforcements. The Navy could cut off enemies’ sea-borne supplies, just as it did with Napoleon’s army in Egypt.

The enemies (of Britain) and other major European powers had to divide their resources and cash reserves between their large military forces and fortifications and land defences to fend off attackers and defend their borders. Many believe the domination of the sea allowed Britain to rapidly build its empire after the Seven Years War (1756–1763) and throughout the 19th century, giving it enormous military, political and commercial strengths.

In theory, the highest commands of the Royal Navy were open to all within its ranks showing talent and following routes of promotion. However, in actuality, family connections and political or professional patronage were very important to rise to ranks that exceeded Commander.

A Commander (Cdr), is a rank nestled between Captain and Lieutenant Commander, and formerly known as Master and Commander, a title which originated circa 1670 to describe naval officers who commanded “ships of war” too large to be commanded by a lieutenant. These ships were usually unrated sloops-of-war (of no more than 20 guns), fire-ships, hospital ships and store ships. The commanding officer of this type of ship was responsible for both sailing and fighting the ship and was thus its ‘master and commander’. 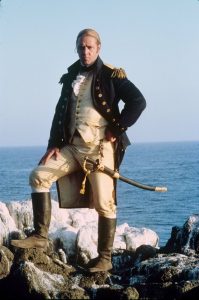 Jack Aubrey – notice the correct positioning of the sword

This is a wonderful sculpt, depicting a commander of the Royal Navy during the 19th century, although there is no exact date given on the box, I believe this to be in the early part of the 19th century.

My reasoning for this is mainly due to the resemblance of the character Jack Aubrey (Russell Crowe) in the movie Master and Commander (2003) aboard his ship H.M.S. Surprise in 1805.

This was an adaptation of the 1969 novel of the same name by Patrick O’Brian, loosely based on the naval feats of Thomas Cochrane, a daring and very successful officer of the Napoleonic Wars.

The kit comes with two head versions, one bareheaded the other with the British officers’ bicorn hat which has wonderful detailing and trim. Again this helps us to tie the figure’s date down, as these were in use from the 1790’s until at least 1914. 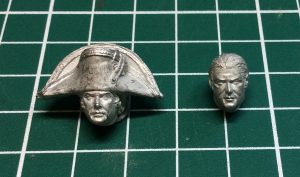 Although it became synonymous with Napoleon Bonaparte, in truth most staff officers wore the hat as part of their military/naval dress.

The facial features to both heads are finely sculpted and attach via a peg and hole assembly, the join nicely hidden by the high collared shirt.

The main piece, comprising of the torso and legs is full of details and although I have no knowledge of the dress uniform of the period, it bares good comparison once more to the movie. 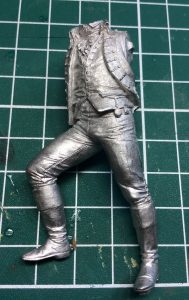 The open jacket has nice detailing including the epaulettes and dress buttons, sharp undercuts and boasts wonderfully realistic creases, not only to the sleeves but also to the lower back.

Beneath the jacket we see his buttoned shirt, although close scrutiny shows that there is one missing, a nice touch in my opinion. Lets not forget these uniforms would be subjected not only to the rigours of warfare but also to the inclement weather conditions.

The jacket has two separate parts, the coat tails, that attach via pins to holes located near the buttocks of the trousers. The trousers have nice seams and once more, subtle and natural creases and folds.The boots are incredibly nice!

I will be sorely tempted to build the version carrying the bicorn, that way benefiting from the hat held in his right arm and the bare head. This should make the painting even more varied and interesting.

On my kit both right arms (the other attaches to the hand carrying the telescope which looks accurate and to scale) fit perfectly and snugly to the body, but the left arm will require some preparation, either the hole isn’t deep enough or the cast is a little off. I envision having to pin and add a little putty to the gap to rectify this. 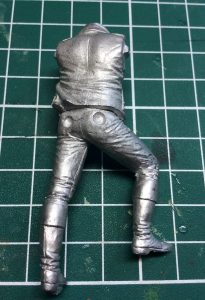 nice details including creases to the small of the back, take note of the sockets for the coat tails

The sword within it’s scabbard is again finely detailed, mine was slightly warped, take care when straightening this piece so that it doesn’t snap. The pictures I have seen of the completed kit shows the sword sitting pretty much parallel to the ground, although I am not sure that it would been carried like this (in addition take note of the picture above of Mr Crowe!). It looks like it could be quite tricky to attach to the chain links on the waistline. This brings me to the nice pocket watch that hangs from the waist, a very nice touch!

Other than the three piece stair and base, the only other parts to look at are four reasonably small detail parts, two pony tails for the head options along with two small rifle parts for attachment to the figure.

These parts are very small and will require time, attention and care to attach properly.  Talking about the base Pepe Gallardo produced a very nice SBS of his version showing an expanded set of stairs, decking and side rail.

The cast is very nice with only one or two soft mold-lines that will need removing, I like to gently rub metal figures with wire wool for the cleaning and prepping process, followed by a wash in some soapy water. There are no other defects presents whatsoever! Very nice!

This figure is very well considered and thought out, the composition is balanced regardless of which version you assemble and the attention to detail of the historical components and the anatomy is spot on. As with bestsoldiers previous release, Knight of the North, which I reviewed HERE, this figure once again blurs boundaries and I am sure will appeal to many people for different reasons. The film Master and Commander which was inspired by true events now has a figure inspired by the same movie and I wholeheartedly agree. This little twist to the Napoleonic theme adds a unique and original element to this great figure.

So here we have an incredible figure sculpted by Antonio Zapatero, wonderfully presented, depicting a Commander during the Napoleonic Wars, with a nod towards the movie Master and Commander, with three different possible versions from the same kit? I can’t see any reason why this would not appeal to many different people for several different reasons, in my opinion this will become a very desirable kit. My only reservation throughout writing this review is that some of the parts are very small, although this is actually another reminder to how well detailed and to scale this figure is!

At €48 I believe this kit offers excellent value for money for all the reasons discussed above! I highly recommend this kit! You won’t be disappointed!