Garandur is the latest commercial release for Joaquin Palacios Studio and it is a thing of savage beauty. The kit arrived safe and secure within a rather plain and boring brown box, sealed with a sticker depicting the assembled kit but no boxart. The concept art as it frequently is, is done by Roberto Cirillo.

Inside we find nine, polyurethane resin parts sealed in a ziplock bag and protected by layers of bubble wrap. First impressions are very good, lots of detailing and clean, crisp casting by GRX Creations. 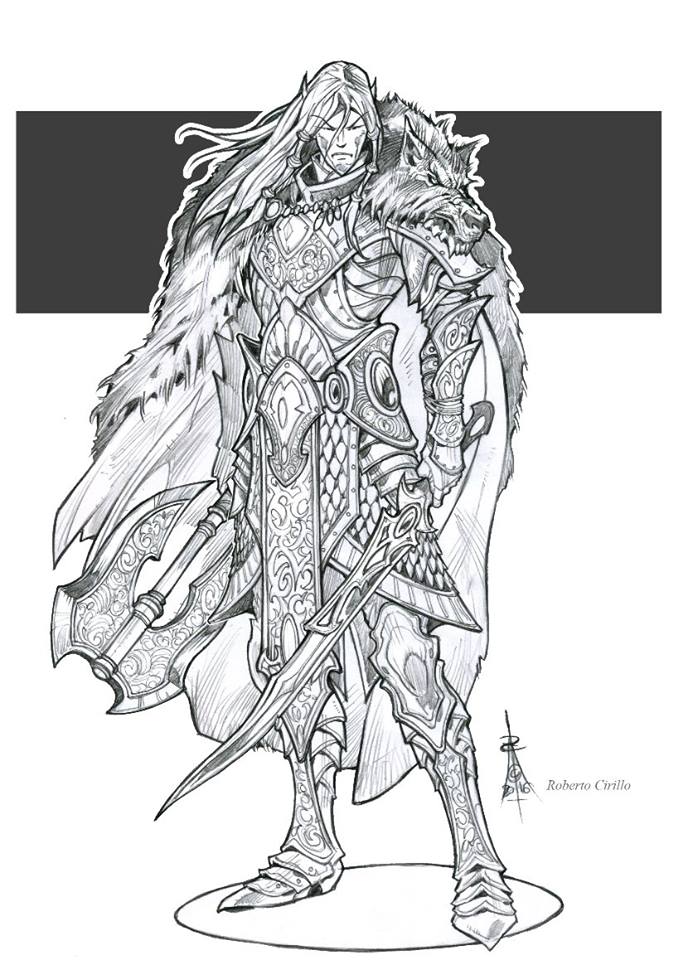 I have to say that when I was into Games Workshop and their figures I never really liked the good guys, Elves, Dwarfs, Sigmar etc I really did not care about and even my passion in literature and cinema, although fantasy based has always been the bad guys, hey do not judge me, I just generally found the design of those creatures and monsters was far more interesting and cool.

So Joaquin must have done something a little special for me to be excited that I am holding what is without doubt the best interpretation of what I am presuming is a High Elf that I have ever seen. I believe as I discuss at some length, that the reason for this, is the design and little details that make this piece stand out against the other Elves, this guy looks and feels dangerous and I like it! 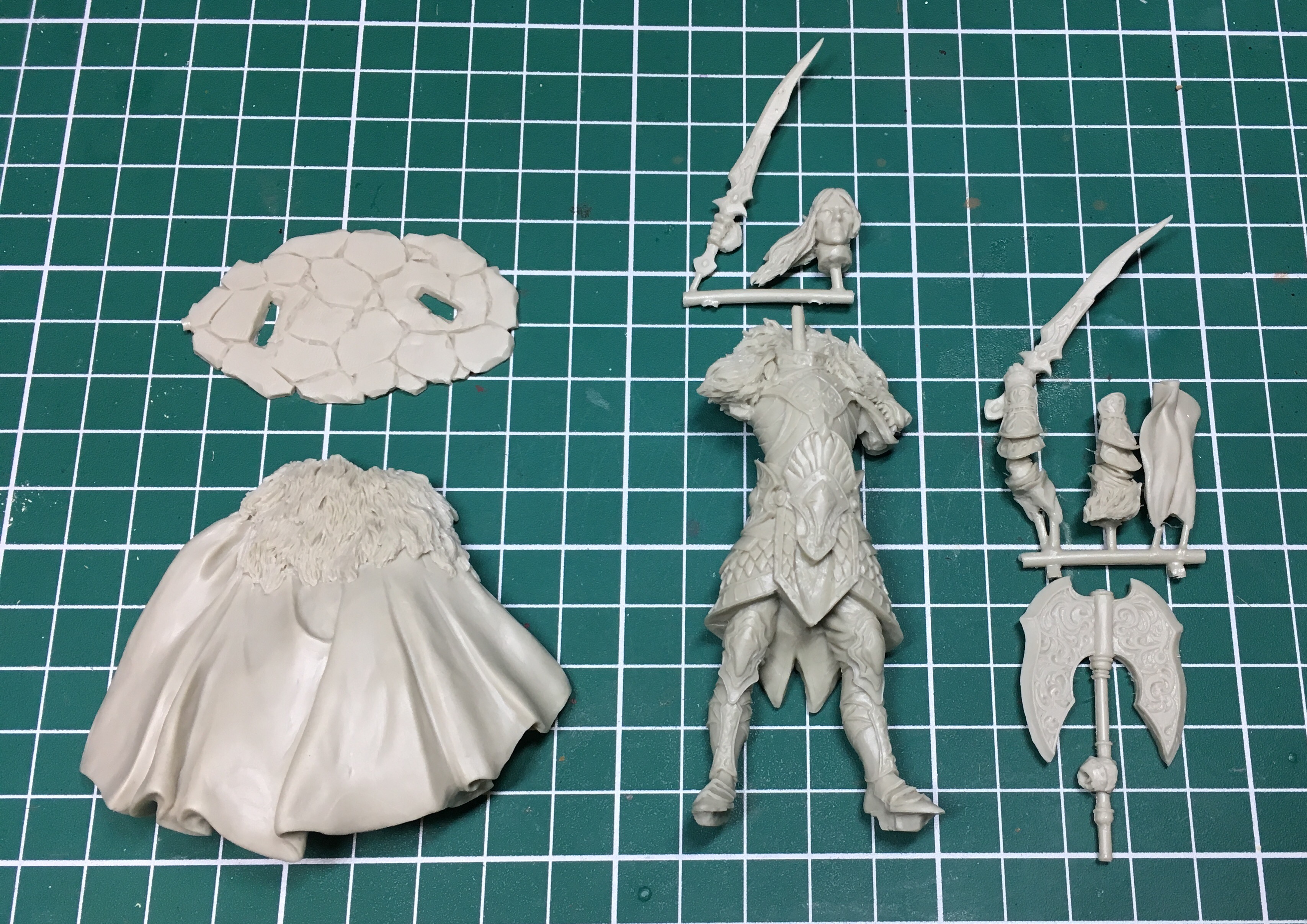 The main element of the kit consists of a full body minus arms and head, attachment for the left arm is different to anything I have ever seen before and I suspect this was necessary due to the tightness and close proximity of the armour across the shoulders. Rather than the normal pin and hole assembly what we have here is a uniquely shaped, pincer join on the arm that “wraps” around a wedge in the shoulder. Dry fitting shows this works really well. The right arm is a little more traditional but I am already tempted to remove the misshapen peg and pin it myself. 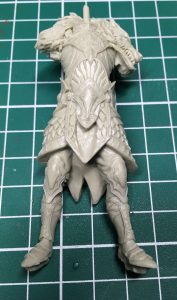 The whole of the torso and legs is covered in ornate, angular, scaled and embellished armour, it can be interpreted as any type of metal yet I suspect it is intended to be gold. The “skirt” with trim looks to be made from overlapping scales, again open to interpretation, maybe a metallic element of some kind but could also be the scales of some monstrous creature or dragon.

There are multiple layers to the various surfaces, some smooth and others decorated with swirls and Elven patterns engraved into the surface whilst others yet are set off with precious stones of varying sizes.

The armour to the legs continue the elaborate theme but on first glance i was a little disappointed that the rear of the legs lacked the crispness to the details and in fact the armour actually stops just past the sides, then it is just plain however, I then realised the cloak would cover all of this and so the sculptor had purposefully chosen not to invest time on details that won’t be seen. That does mean however, that you have no choice but include the cloak.

So at the moment it all sounds like the usual Elf image right? Well there are certain things as I said already that give this Elf a warrior like appearance and aura that I really like. For instance, take the wolf pelt draped across his shoulders. Too many times I see these where the creature has almost been a caricature of a Wolf, not this one! The fur is coarse, thick, spiky, the ears are flat back against the skull, the eyes are like burning pits of hatred and the nuzzle and mouth are fearsome, razor sharp teeth and lips drawn back in a frenzied snarl. This by itself changes the “feel” of the Elf.

Then we have the weapons, the left arm is sculpted carrying a wicked looking, ornate curved blade. The right arm can be attached with a choice of either a second blade or a short handled, double bladed battle axe. The blades surfaces continue the ornate theme  with swirling engravings, clearly this is an Elf warrior of high social standing. No matter which combination you decide to go with, it will look equal parts brutal and flamboyant.

The head again, in my opinion, shows this Elf is not the typical dandy, the usual features are all present, high cheekbones, pointed ears, slender jawline, yet there is an aura of a warrior that is a little more brutal and grounded than the archetypal Elf, coupled with the weapons and the vicious looking wolf pelt, we have an Elf that appeals to a monster lover such as myself. 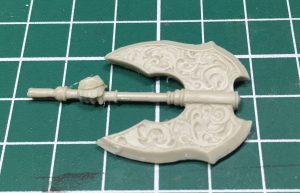 The cloak adds a level of dynamism to an otherwise static figure and when attached really brings the Elf to life and accentuates his pose, he is standing, feet planted wide, chest out, back straight with a determined look to his face. The cloak has stylised and over exaggerated folds, flowing out to the right, adding movement to the figure that also mirrors the movement of the Elf’s flowing locks.

The cloak has a natural fit to the figure, sitting up underneath the wolf across the shoulders however, dry fitting shows that some gap filling and texturing will be needed. With this in mind I would suggest painting the figure and inside of the cloak first prior to attaching the cloak, then filling the gap where the two sections of fur meet, then finish off the outside of the cloak and any touch ups or shadows throughout as needed. 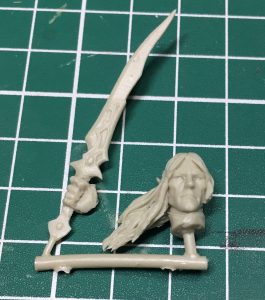 The kit also comes with a rather thin and basic base depicting a section of cobbled roadway. To finish the figure off there is a loin cloth that fits snugly into a recess just below the ornate armour at the waist.

The cast is as expected with GRX Creations very good indeed, there’s soft flash to remove from some of the parts with soft partial mod lines in one or two places, there are no serious defects such as air bubble holes or casting slippages.  Most of the parts are attached to a sprue and will need clipping off and filed smooth. There is also a bar of resin at the top of the neck which sits in amongst the fur of the pelt, this will need clipping away, take care not to damage any of the fur texture.

I have actually already touched upon this in the above section but I really do feel that this is quite a unique sculpt of a very popular subject, there is almost a touch of evil Dark Elf to the figure and as such this gives you more options to consider when painting it. 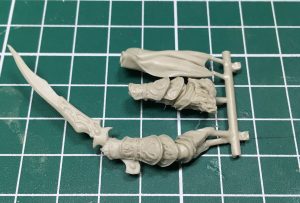 the embellishments continue to the arm armour

The anatomy is perfect, something that Joaquin pays a lot of attention to and the design is well considered and the composition is balanced, despite being in a sedentary pose, the stance and cloak really force the concept that he is alert and on the verge of an explosive action. I like this, it really adds to the sense of danger and foreboding.

The pelt frames the face nicely and should act as a tool to draw focus to the head, the cloak really accentuates the sense of motion and frames the figure very nicely.

Joaquin Palacios is rightly regarded as one of the very best sculptors in our Art and his ability to design and sculpt believable characters is second to none and helps us to empathise with the sculpt. His works are always sought after whether they be as freelance for other companies or part of his own personal studio. The quality of the sculpt, the popular subject matter and the excellent casting will make this piece a big hit too.

The kit is 80mm in scale and will cost €44 plus shipping which in my opinion is a fair price. I am sure anyone who is a fan of Joaquin’s work or Elves in general will find this price no deterrent to a purchase! The quality of this kit is worth every euro! 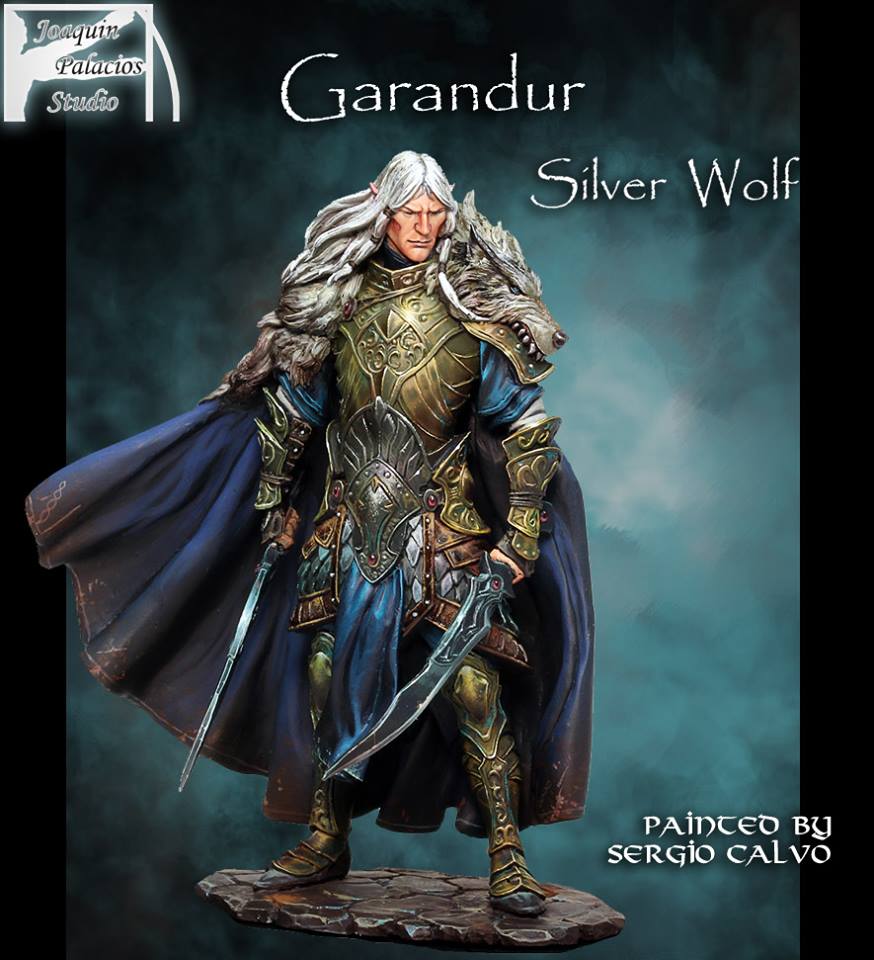