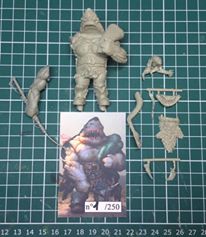 “Shark Day” is a Nine part, polyurethane resin miniature based on the stunning concept art by Maxim Verehin and sculpted by the equally talented Stephane Camosseto.

This 75mm kit arrived in a really nice plastic, clam pack adorned with the boxart by Sébastien Picque (aka dead fish painting): along with a copy of the concept art, showing its issue number (mine being no1!).

This is a limited run of 250 figures, when they’re gone they’re gone! The name for the figure originates from the name of an art competition, whereby the entrants had to produce a piece of art around the same title, once Florian saw Maxims’ entry he was compelled to contact the artist and enquire of the possibility of turning the concept into an actual figure.

Maxim Verehin is a concept artist for Lionsgate movies and illustrator for Wizards of the Coast and has a CV boasting employment with GW, Warner Bros and Imagine FX to name just a few. 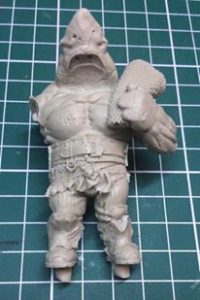 The clever cutting for casting

The sculpt by Stephane is incredible, perfectly capturing the character of the concept art. This is a hulking beast, covered in a wealth of details, some Aqua anti hero, trudging off with his “days catch”. In my opinion our “hero” seems heavy set, muscular but leaning towards overweight, this bulk creates a feeling of heaviness and imposing dread.

There are lots of details and nice touches to admire here, from the three-fingered club like hands, the heavy boots (perhaps old school diver boots), broad belt and the intricately sculpted scales of the mermaids lower torso.

Stephane has paid close attention to the concept art, even picking out the various scars and cuts to the Sharks’ body, the seams of his trousers, the runic patterns to the belt and the malevolent gaze of his hooded, beady eyes. The head of the mermaid has nicely sculpted details, her facial features are fine and delicate and her hair has more than enough definition to paint up nicely. 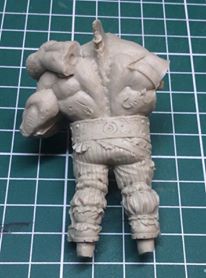 The casting by GRX Creations is of the highest quality. There are no major moldlines and there are no serious defects such as air bubble holes or casting slippage. Prior to casting, Stephane has done an admirable job of cutting the sculpt in such a way that each part fits nicely during assembly.

The harpoon arm for instance is cut immediately next to the twine sculpted upon his shoulder, this means that when attaching the arm, the join sits immediately beneath the twine, negating the need for any gap filling. The arm is connected via a two pin assembly consisting of a round peg and square hole in the arm and square peg and round hole in the shoulder.

Take care with the harpoon, it’s reasonably delicate, in fact mine had snapped in transit but a quick private message and a replacement part was winging its way straight to me. The details are crisp throughout the cast exhibiting nice, sharp undercuts to items such as belts and buckles. Even the wickedly sharp and pointed teeth are perfectly rendered and realistic. 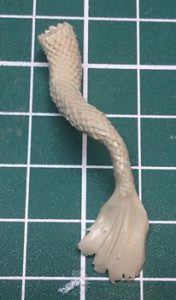 The scales are nicely rendered

“Shark Day” really pushes the boundaries of what is believably possible, even though it’s a fantasy figure. Despite its anatomy essentially depicting a bipedal life form, it is obvious through some clever design that our anti hero is a shark man.

As much as I would like to attribute this to the undeniable skills of the sculptor, it’s the concept of Maxim Verehin that makes this all so believable and I wish I had been able to make contact with Maxim to ask about the inspiration and creative process for this unique piece.

The design of the anatomy works, the broad shoulders, musculature and vicious set of jaws all display the natural power and velocity of the predatory shark, whilst the clever twists, such as the hands and legs are done in such a way that the overall piece is well considered and executed.

The concept by Maxim, the sculpt from Stephane, the crisp casting by GRX, the competitive price point and the limited edition run should all make this a desirable piece and in my opinion it does. This is a project that took a lot time, effort and money to bring to fruition and I believe it’s a shame that I haven’t seen more painted versions of this figure. 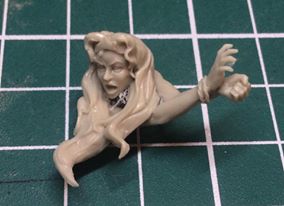 Indeed, Wonderlands Project are currently running a painting competition (details below) through their FACEBOOK page with some tasty prizes up for grabs, at the time of writing I was trying to convince Florian to get some trophies produced for the competition. I’m hoping the competition will generate a lot of interest and we can see some cool versions of this figure.

I believe the price is particularly attractive when you consider the concept, sculpt and limited availability. This is a piece that really stands out in our hobby as being particularly unique and offers a wealth of painting and modelling options.

I had a chance to speak with Florian at Salute 2016 and here’s a little of what he had to say about Wonderlands Project:

“I started Wonderlands project in 2010, it was a little miniatures range (for painters) with a few projects. The Shark Day Miniature was not our first project. I already have more than 20 miniatures in the ranges and already did another Indiegogo campaign. But it was a special project. I had to cancel another project and one day i saw the original artwork of this “Shark Day” (the name Shark day is the name of the theme of a little contest between few illustrators). I loved the one of Maxim so i contacted him immediatly to ask him if a miniatures from his artwork could be possible…

Sebastien will do all our Mauser Earth Miniatures paintjobs. Maybe some of the other miniatures too.
Cedric from Smart Max contacted me in April (after the event at Montrouge (by AFM Montrouge), and we talked about Mauser Earth. I already loved this miniatures range, there are some wonderfull models sculpted by great sculptors (JAG, Allan Carasco, Patrick Masson, Benoit Cauchies, Stephane N’Guyen…).

Mauser Earth also have a really interesting background (even if actually there was not many things that have been revealed), there is a lot of great ideas and i’m proud to be able to work on it. I officialy bought all intelectual property in October. There is a lot of things to come (we have over 50 concepts!).

We are actually thinking about a Kickstarter campaign who will be about the skirmish game AND to make new miniatures for the japanese faction (Pacific Empire actualy have only one miniature).

We are thinking about the format, but i think there will be one starter for each factions (maybe with box with 2 factions for 2 players). We are also thinking about more boardgame in the universe of Mauser Earth!

The recent festival of Games at Rouen was a great event! I had the opportunity to meet the guys behind “Briskars” and “Kolaps” (and also the guys of the “Waaagh Tavern”). We talk about many things, and i’m sure that a game for Mauser Earth could be a great thing!”

Somthere you have it, Florian has lots of plans and ideas, I for only will be offering my support!